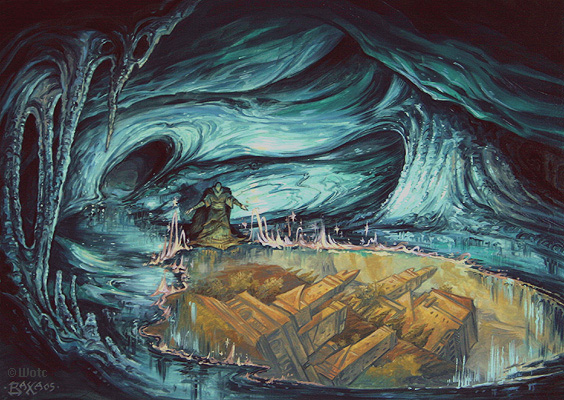 Hello, Insiders! This was yet another extremely calm week for speculations. The most notable and surprising news is the further increases on BG Delirium and WU Standard decks. In a week where nothing happened – not even a big Standard tournament was played – the prices of those two decks kept going up.

I think the reason is the lack of the rise of a new deck. Not having any new information might have caused new players to buy one of the two most played decks instead of trying new strategies. I will track price movements in future weeks with no big events to see if this is knowledge one could exploit as a business opportunity. I would appreciate if readers could share their thoughts on this subject in the comments below.

Regarding Modern, I'm happy I could keep closing more profitable positions I opened before Treasure Chests were announced. I'm still skeptical to invest in Modern – remember that Modern Masters 2017 will be launched March 17 – but I could see myself buying the non-reprinted cards for short-term speculation.

The World Magic Cup will be played this weekend featuring Team Unified Modern. I don't think we will see any new interesting deck, but you never know, so keep an eye on the tournament.

Now let's see the five cards I prepared for this week's BSH: 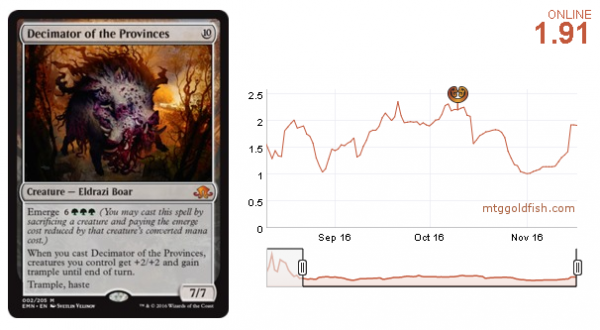 Decimator of the Provinces was played once more in SaffronOlive's budget deck. Every time his decks are published investors jump in immediately, buying out the deck's cards and creating a financial bubble that pops a week later. I was holding a bunch of those big pigs and this is a quick boost to my portfolio. I will buy them again when they crash to 1 tix. 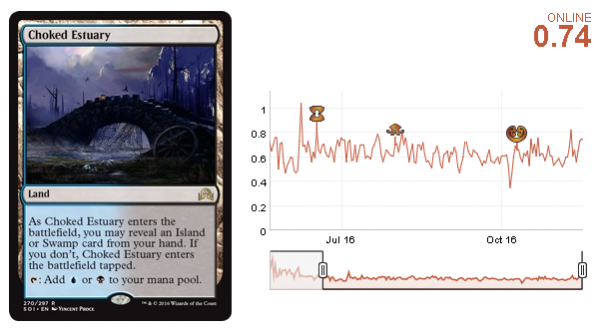 One of my favorite strategies provided another selling opportunity this week. I will wait until they go back to below 0.50 to buy them again, and then repeat the process as many times as possible. 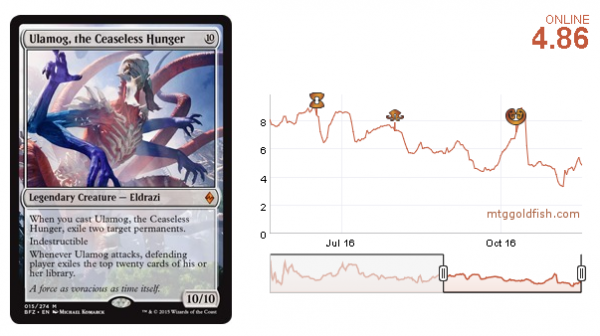 Ulamog was one of my positions that wasn't doing very well. This past weekend, Tom Ross won the Modern SCG Open with WG Tron. In response, a bunch of the deck's cards rebounded. I could sell my copies of Ulamog for almost the same I bought them for, allowing me to wait for a better spot to buy them again. I think the card will continue its bearish trend because it is not much played in Standard, but it could also see a rebound if the deck gets hyped. I recommend trying to close it in for any amount of profit and avoid the current problematic spot.

I haven't talked yet about the Big Red deck that won last Modern GP and shook up the format a little, in part because of lack of interest in Modern speculation at the moment, but this was different – I could buy them for real cheap, and I hope you have some copies too.

In the last part of the graphic above, we can see speculators buying and liquidating a few days after, so the current support level is unlikely to be perforated. If the deck gains a home in the metagame or incentivizes players to try new builds with Skred, Snow-Covered Mountains and Scrying Sheets, the card will slowly go up, making it a long-term speculation target. As the card is unlikely to go down in my opinion, the best play is to hold until we see an MTGO announcement or event that will crash its price.

One of the most unstable cards financially speaking saw a quick spike in the last days. The resistance level is still uncertain, but a new support level at around 10 tix could be starting to form. I think it is better to sell it now than wait for the unpredictable, and if it drops below 10, one could consider buying back in.

See you next week !