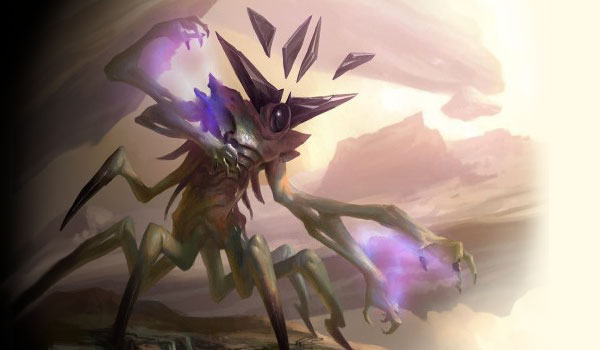 Welcome back, investors! The last two Grand Prix shook up the quiet Standard landscape (finally!) that was beginning to see complaints about being a two-deck format. All it needed was just a big tournament weekend. The past week was superb for investing, plenty of cards that were stuck spiked, and there will be great buying opportunities in the days to come, as I will write about next: 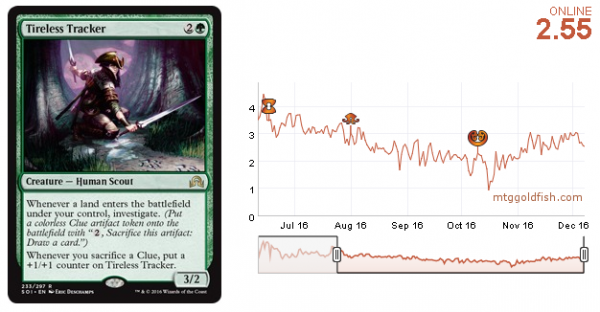 I have mentioned it a few times in previous episodes, and I think it is now the time to sell. In my opinion, the card will rise in the long term, but it should go down in the following days. The card was played mainly in BG Delirium, a deck that doesn't seem well positioned anymore. Many players made the transition to RG Aetherworks Marvel, as they share some expensive cards. I expect those players to sell the most expensive cards that are not played in the Marvel deck to buy the new ones, and Tireless Tracker as well as Liliana, the Last Hope and Hissing Quagmire are in that category.
Verdict: SELL 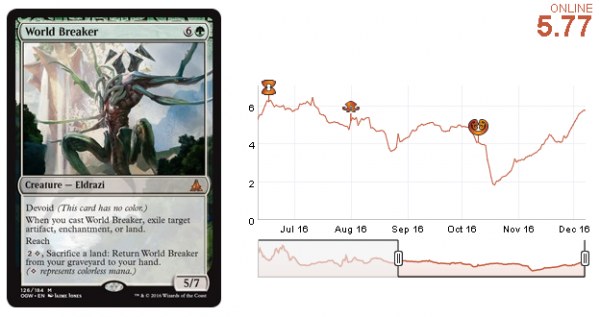 World Breaker is one of the big winners of last weekend. It rebounded from its all-time low of 2 tix two months ago to 5.7 thanks to the great performance of the RG Aetherworks Marvel, even though the deck usually only plays one copy (and in the sideboard, at that). The deck took the paper metagame by surprise but not the MTGO community, as the deck was played heavily long before. Taking that into account, the window for this card to keep rising is very short, because many online players already bought them and only the new players will keep pushing the price up. I consider it much better to sell now than try to get an extra profit.
Verdict: SELL 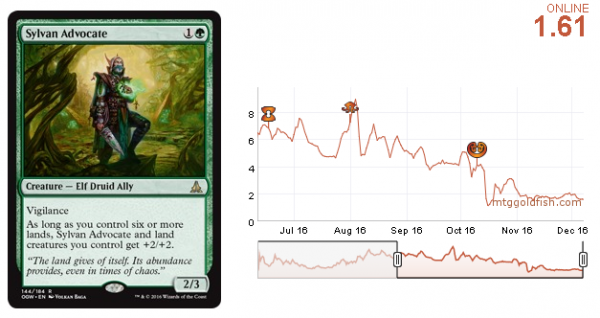 Sylvan Advocate is one of the few cards worth buying this week, not because there are not interesting cheap cards, but rather because I expect those cards to keep going down in the next days. Sylvan Advocate is the exception, as it is already super cheap and unlikely to go lower. The next set could be the help it needs to be played again, and the Ajani planeswalker spoiled a few days ago could be a hint that WG will have strong cards.
Verdict: BUY
Gideon, Ally of Zendikar 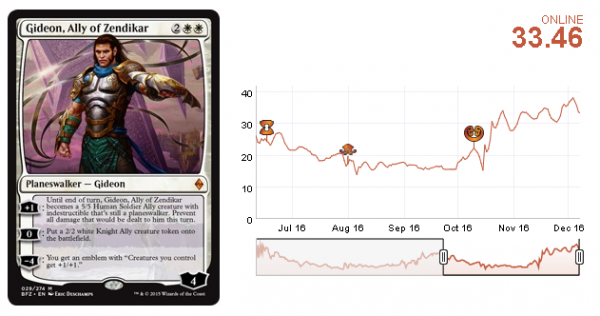 UW Flash deck is one of the losers of the past weekend, and not well-positioned in the way the metagame is shifting. Gideon, Ally of Zendikar is the most expensive card in the deck and the most expensive of the entire Standard format as well. I think the planeswalker has reached its all-time high and in the following days it should return to a more reasonable price. I expect the UW Flash players to try different strategies, and the expensive cards will be the first to be sold. The future is not very bright for Gideon, and I recommend you sell your copies as soon as possible.
Verdict: SELL 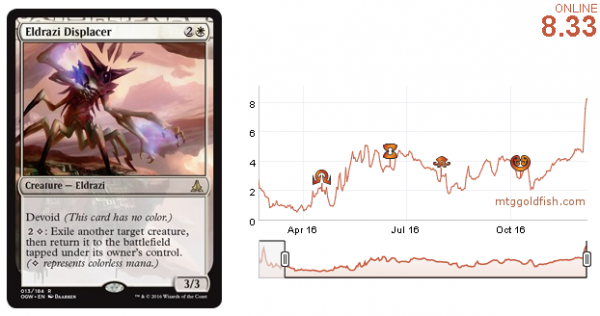 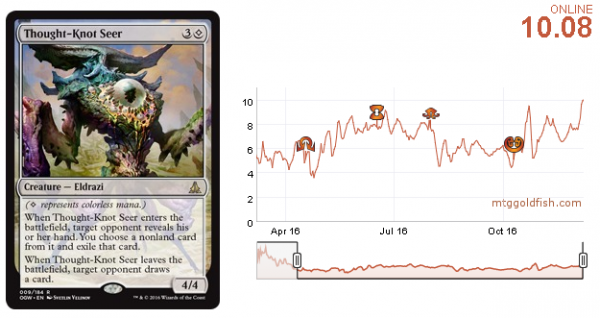 This time I will rate an extra card because they reasons are exactly the same for both. As you may have noticed,  Eldrazi Displacer and Thought-Knot Seer were played in one of the most interesting, completely new decks of the Grand Prix, three and one copies in the maindeck respectively, in the hands of Pascal Maynard and Seth Manfield. I expect many players to try the UW Panharmonicon deck, as it is a fresh new brew and played by top pros, which should cause these prices to go up even higher. The relevant question here is: how high will they go? I think it is worth it to wait a few more days to see what how the Standard metagame transforms to see their real potential. Add to that the modern RPTQ for Aether Revolt that will be played this month, and Bant Eldrazi influence these cards' prices, too.
Verdict: HOLD
See you next week!