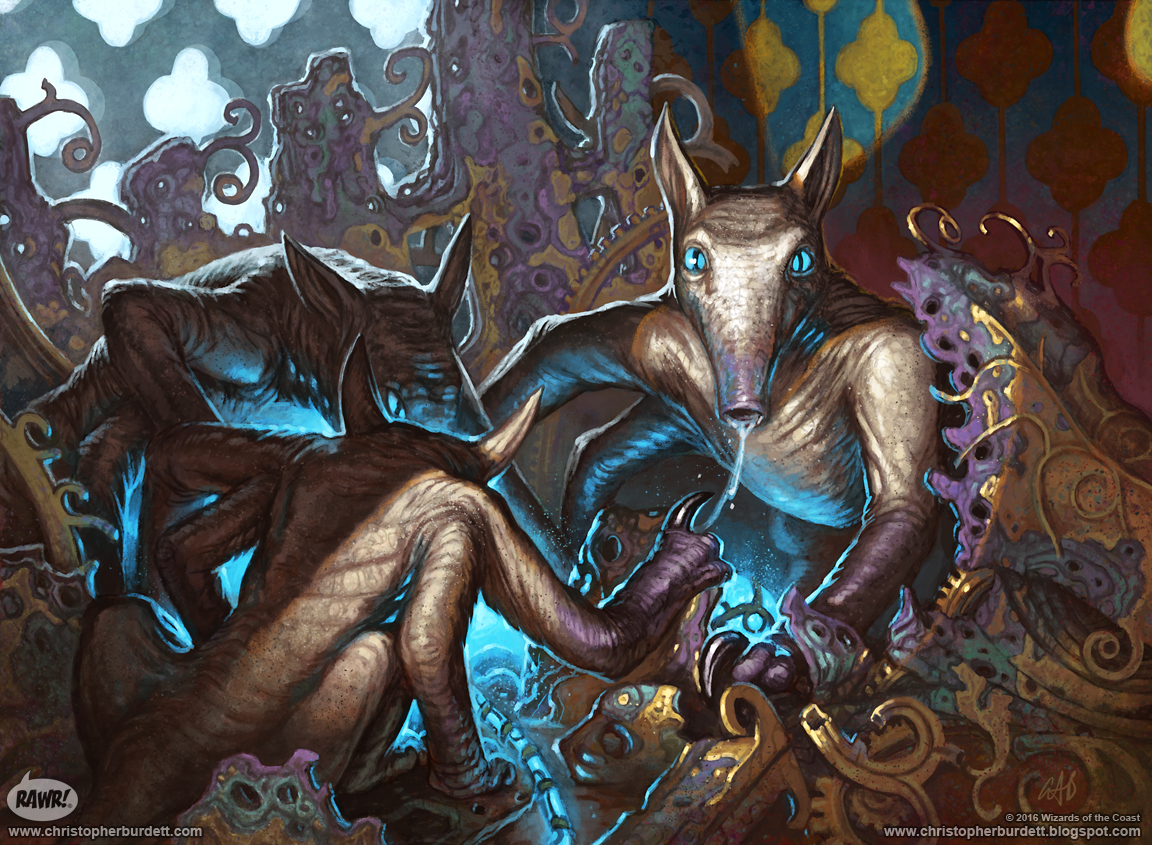 Last Friday the landscape of constructed Magic changed dramatically. Five cards were banned and an entire new set became legal for tournament play. If those two factors don't constitute a shake-up, I don't know what does.

I made the trek to Columbus for the SCG Open, where I got a chance to play nine rounds of Standard (lost my win and in for Day 2) and then nine rounds of Modern in the 250-player Classic (7-2, 12th). With nine rounds of high-level tournament matches under my belt in each format post-release, I feel like I've learned a lot about where things are likely heading.

It is amazing how fast the world adjusts to tournament results these days. The results of the Open weren't even in the bag yet and cards were already starting to move in value. I'm not going to bore you with useless information about cards that have already begun to move: blue and green Gearhulks, etc.

The cards that have already gained 20% or more in value are likely close to, or at, their peak value. That makes them poor investments at this point. Remember, you only get credit for investing wisely in the right cards while they were low if you actually get out of them while they are high. Remember, Standard cards almost always trend downward. Trading those Gearhulks, and especially Aether Revolt singles, while they are holding value is a must for any serious collector.

So if I'm not going to bore you retelling what has already happened, what exactly is there to discuss? Today I'm going to share where I think the actual value may be hiding.

I missed pretty hard on Walking Ballista; it has gained 38% since I wrote the article. The Ballista is actively good in the GB Aggro deck that performed well in Columbus. However, I still maintain that it is not sustainable as a $10 card, let alone a $16 card. People need it for decks and are buying into the spike and this is the absolute perfect time to get out of Ballistas, as far as I'm concerned.

My underrated picks actually all stayed exactly the same—so, no gains—but I want to wait until after the Pro Tour to decide whether or not they count as hits or misses. Week one is all about obvious decks and synergies, which all came out of the gate high—the subtle stuff takes a while to pick up steam.

It is hard to pick winners out of the gate because everything starts so high, a response to demand for cards nobody owns yet. Now that people have opened product and demand has cooled off, it becomes easier to start looking for undervalued cards to target. 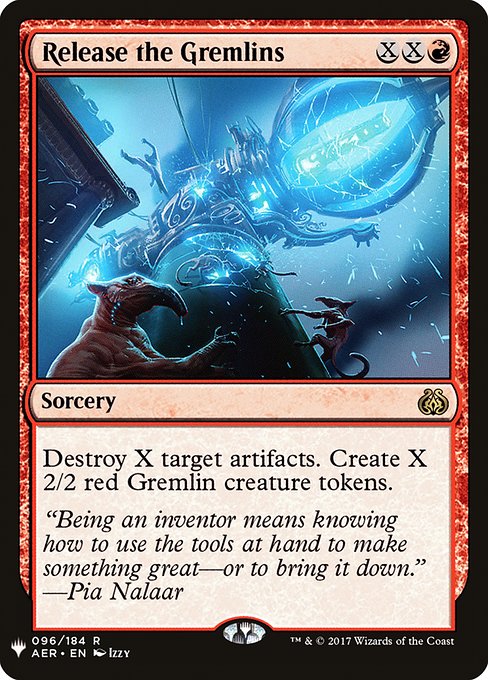 I have a strong inkling that Release the Gremlins will be a very strong Standard sideboard card moving forward. All three people in my car lamented that our biggest mistake of the event was not sideboarding multiple copies of this card. Most decks have a lot of artifacts and some decks are all artifacts, which makes this card flexible enough to be good but devastating enough to be absurd.

If a lot of PT decks are auto-including Release the Gremlins in the sideboard it will spike this puppy from a bulk rare into the few-bucks range.

It is funny how one week a card can be on my list of most overrated and the next week I'm all about picking it up. Well, that is what happens when a card loses roughly 50% of its value in a week. I was right to say overrated then—but now, at $4-5, it is an enticing card.

So, here is my thought process behind why I'm willing to spec on this card at $4. First of all, I think it is one of those zany Commander/casual "Johnny combo player" cards which means it will hold some value. I'd actually guess that it can't really go less than $2.99.

However, it certainly has room to grow, especially if somebody breaks it at the PT. And Paradox Engine is exactly the kind of card that "gets broke." If somebody builds a competitive deck around Engine it could very well be the breakout card of Dublin, sort of like how Aetherworks Marvel spiked in Honolulu up into the $20 range. 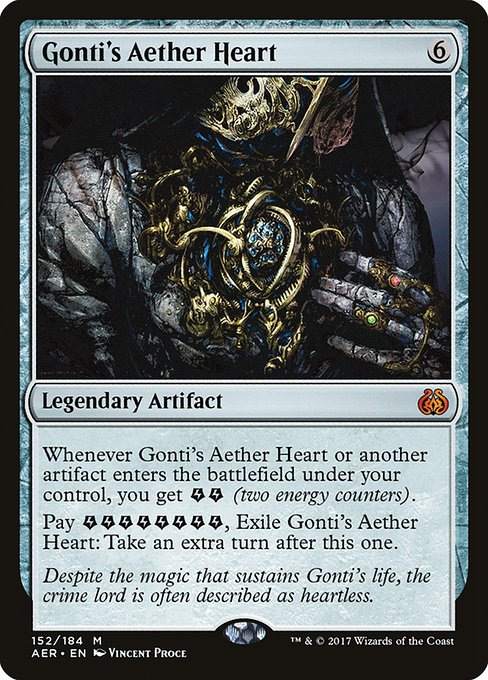 Gonti's Aether Heart is a mythic that has dropped down below $2.99 and has some potential both long- and short-term. First of all, I could see this being a card that could go into a Paradox Engine deck that could allow you to "go off" by taking a bunch of turns. The short-term gain would be that the card could spike.

However, the risk feels low on a card like this because it has some obvious Commander appeal as a Time Warp effect that literally every deck is allowed to play. Time Warp is obviously the best thing you can do in a multiplayer game (since it essentially skips everybody else's turn) and now a mono-artifact or mono-black deck will have access to an effect that typically only blue decks can run.

Recurring the Aether Heart will prove challenging as it exiles itself on use and is legendary so it can't be copied. Barring some sort of Mirror Gallery shenanigans, you would have to use something like Prototype Portal to go off. There may be other ways to abuse it, though, and in any case casual players will enjoy building around this card for years. 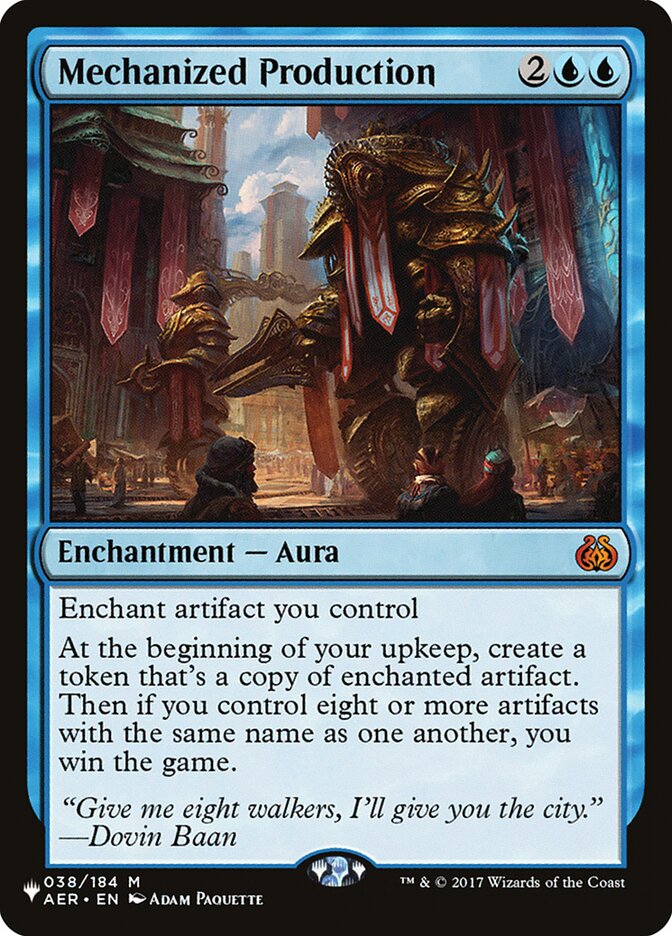 It was funny because he actually won multiple games via the alternate win condition, when he made the eighth Deadlock Trap. 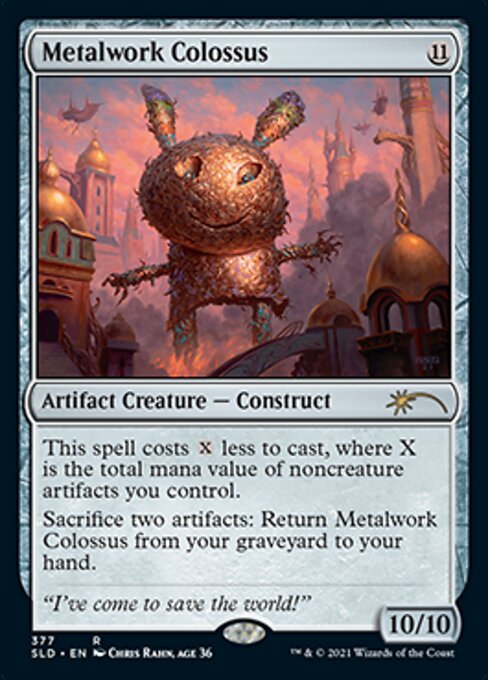 I can't completely endorse this pick because I don't 100% understand it but I'm going to share anyways. I went around to all the dealers at the Open on Sunday evening and asked what cards were hot sellers on the weekend. Obviously, they said they sold a bunch of Felidar Guardians, Fatal Pushes, and Gearhulks, but multiple dealers told me that Metalwork Colossus was a hot seller as well.

I certainly got crushed by Joel Larson's Metalwork Colossus at PT Honolulu last year, so I'm willing to believe just about anything when it comes to crazy combos. I could certainly see the deck being a player in Dublin now that the field has been watered down by both bannings and a second full artifacts-matter set.

These are probably worth trading for if you get the chance.

I much prefer Modern to Standard, and had a blast playing my Abzan Company deck to a 12th-place finish in the Classic. Ironically, the "tech" I brought to the table turned out to be worse than what I had before! I played two Fatal Push in my sideboard instead of Path to Exile and was sorely disappointed when I realized I had no way to kill gigantic delve creatures against Grixis Delver. Frowny face.

Based on my experience in Columbus, a few cards stand out to me right now as well positioned in Modern. 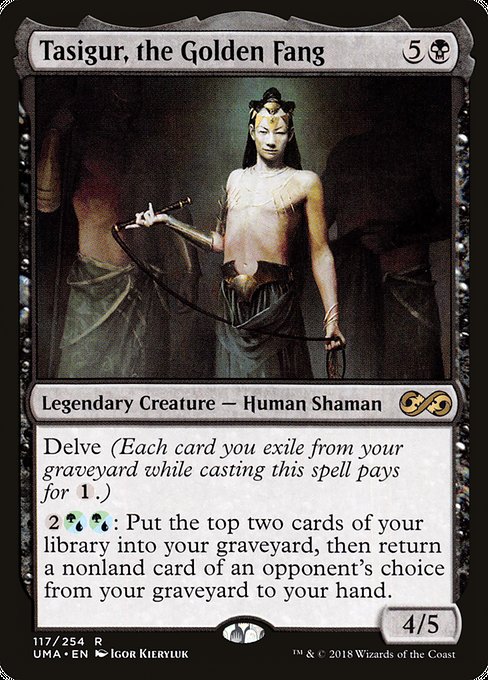 Speaking of delve creatures, I feel very strongly that Tasigur, the Golden Fang is an excellent speculation target right now. The card is really cheap and it is scary good in Modern. The printing of Fatal Push is really interesting because it makes cards like Tarmogoyf worse. Goyf's biggest strength is that it isn't efficiently answered by 1cc removal like Lightning Bolt or Path. Push, on the other hand, is very efficient at goofing up a Goyf.

Tasigur, the Golden Fang (as I quickly learned) was invulnerable to my ill-devised sideboard removal plan of all Abrupt Decays and Fatal Pushes. I also think that Tasigur is likely a card that plays nice with Fatal Push. An insane black control card just got printed; Tasigur is an insane black control card. I fully expect decks that use both to be a big part of Modern moving forward. 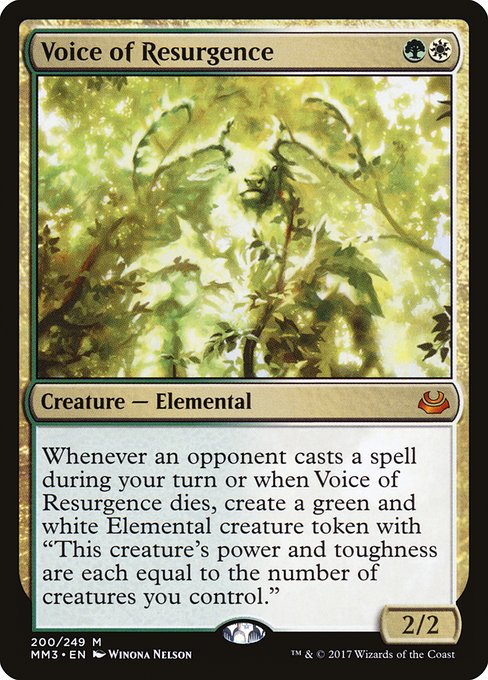 Do you know what else is good against people who want to Fatal Push? Yeah, you guessed it: Voice!

Voice of Resurgence also benefits from the printing of Renegade Rallier, which can buy it back and create a ton of incidental value over the course of a game. In particular, Rallier, Saffi Eriksdotter, and Voice of Resurgence were all featured as prominent maindeck features of another Abzan Company deck that took second in the SCG Classic. 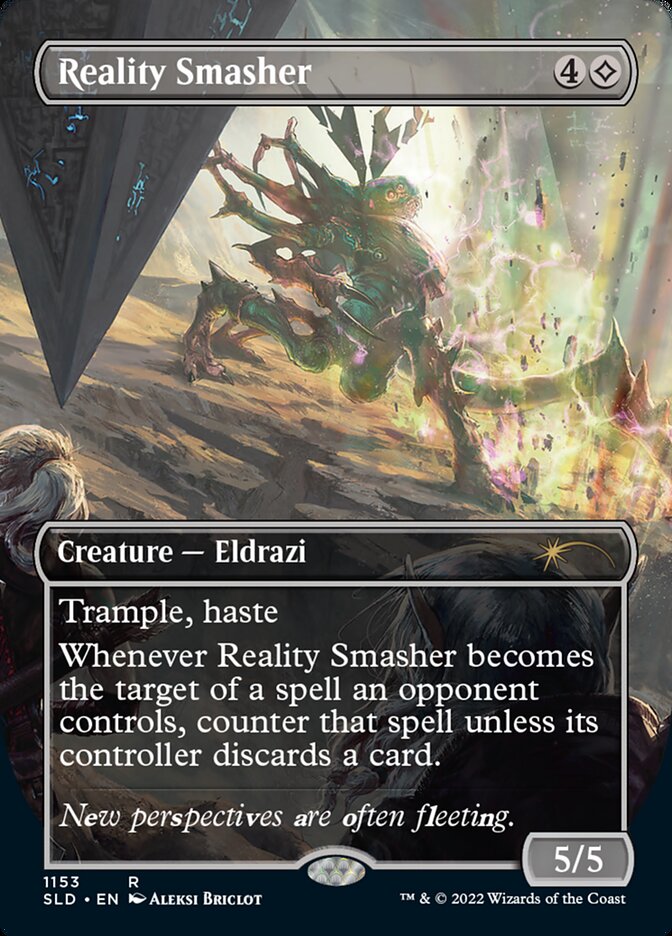 Guess what? The Fatal Push decks really struggle against Bant Eldrazi. I guess a bunch of gigantic creatures that all generate value and don't die to Fatal Push or Bolt are good against Jund and Grixis... Who would have ever believed that?

Reality Smasher has all the hallmarks of a money card except the high price tag, which makes me believe it is an excellent investment card at the moment. The card is even a current Legacy staple.

I have a strong feeling that Bant Eldrazi will grow in popularity in the new Modern format with Fatal Push decks on the upswing. All of these factors are potentially great for Eldrazi cards. People also love Eldrazi from a thematic, tribal perspective—and by now we all know the perils of ignoring the potential for casual demand.

Here's another major player in the Bant Eldrazi deck that's posting an incongruous price tag. I will never understand how a card that's a straight staple four-of in one of the best decks in Modern can be a bulk rare. It blows my mind.

I can't tell you how many copies of Drowner of Hope I have bought for a quarter or less over the past year. I am just hanging on for when they start to creep up in value. The buy-in price is so low and the reward feels so obvious. Unless there's something I'm missing here, I feel like it's no exaggeration to call this free value down the road.

I feel very strongly about my Modern picks. All are cards that I believe got dramatically better, either as a result of the bannings or the printing of Aether Revolt. I expect them to see increased play and thus increased demand.

The Standard picks are a little bit riskier (as Standard picks always are) but what else is there to do with Standard cards besides bet on or against them? The PT is coming up and it is always the decks that people don't see coming that spike things up. My suggestions for Standard are the types of cards that could (and likely would) go into some artifact-based combo deck—and even if they don't find a competitive home immediately, most will hold close to their current value because of casual play.

Whew. Well, it was one heck of a weekend playing and learning about two new formats in Columbus. Eighteen rounds of Magic in 36 hours is a marathon! Enjoy the new formats and make some money.