Below are the total set prices for all redeemable sets on MTGO. All prices are current as of March 6, 2017. The TCGplayer low and TCGplayer mid prices are the sum of each set's individual card prices on TCGplayer, either the low price or the mid price respectively.

The price of Kaladesh (KLD) and Aether Revolt (AER) are both heading in interesting directions. On the one hand, KLD has been in an uptrend since the end of November, bottoming at 57 tix and now sitting at over 80 tix. That's an increase of over 40 percent, and this is while the set is still being drafted heavily! To show you how unusual this is, have a look at how the prices of the last three large sets have evolved over time since their prerelease in the chart below. Battle for Zendikar (BFZ) and Shadows over Innistrad (SOI) were flat or trending down at a similar time after their prereleases, while KLD is pushing higher. I suspect this exception is generated by the recent bans in Standard and the printing of Felidar Guardian. 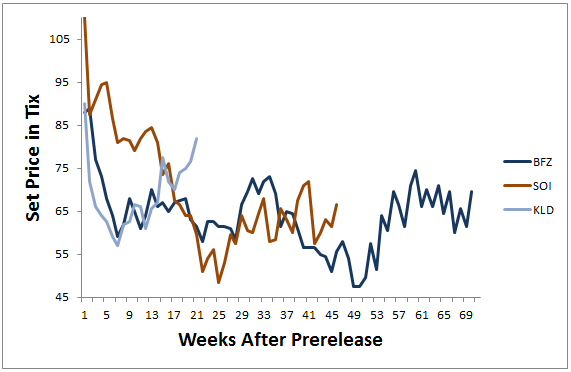 Looming on the horizon for KLD is the end of redemption once Amonkhet redemption begins in May. This is an unambiguously negative event for the price of sets. Once this event occurs, there will be no tie to the physical, and the digital cards will fluctuate in price based solely on supply and demand in the MTGO market. Redemption provides a back stop of value, and without it in place, cards that are not seeing play or have no value in game will see downward price pressure. As a speculator and a player, holding cards from KLD is a highly risky prospect at the moment.

For AER, the trend is different, but quite similar in comparison to the last two small sets in Oath of the Gatewatch (OGW) and Eldritch Moon (EMN). All three sets see large drops after their online prerelease events, and AER is following the trend. The big difference is that AER is the lowest priced of these three sets at this point in time, and is the first small set to reach this level since moving to the schedule of two sets per block. 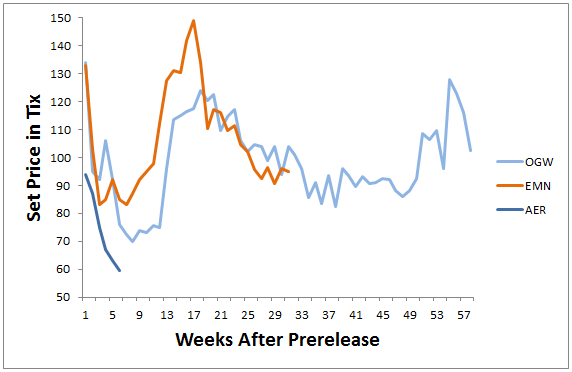 In terms of AER's outlook, it has the same problem as KLD in that redemption for the set ends in May. However, the price path that OGW and EMN have laid out suggests there is some upside baked into AER's current price of 60 tix. The probable bottom on AER prior to the release of Amonkhet will occur over the next three weeks, which coincides happily with the online release of Modern Masters 2017 (MM3) on March 23. Speculators should look to buy cards from AER in the week after this date, while players are scrounging tix from their collection and selling recently drafted cards to enter the queues of this reprint set.

In the wake of the full spoiling of MM3, the Modern market on MTGO is in an upswing with more certainty on which cards are safe from reprint and which cards are going to see an influx of supply. Cards like Fulminator Mage, Engineered Explosives and Noble Hiearch have all seen significant price increases in the last week. If one were holding a broad portfolio of Modern cards, the impact of the full set reveal has been a net positive.

For players and speculators alike, the next few weeks should be spent preparing for the release of MM3. There will be a fantastic buying opportunities for patient, long-term market participants. Drafting of MM3 will be available for three weeks and there will be depressed prices on the reprinted cards from this set at that time.  Everyone should be getting liquid in advance, so if you are a little light on tix at the moment, it's a good time to be selling down Modern positions that have bounced in recent weeks or for rotating Standard cards into tix.

This doesn't mean that there's no opportunity for buyers at the moment. Although many format staples are now at an elevated price, there are plenty of other cards that see less play that are lagging behind, but are also now safe from reprint. Prismatic Omen is a favorite of mine that that will sometimes see play in decks based around Valakut, the Molten Pinnacle. It's also a rare from the pre-mythic era and from a lightly opened set in Shadowmoor (SHM). This one is not that expensive at around 2 tix, but it has regularly been as high as 5 tix in the past two years, with a brief foray above 10 tix when Eternal Masters (EMA) was released. 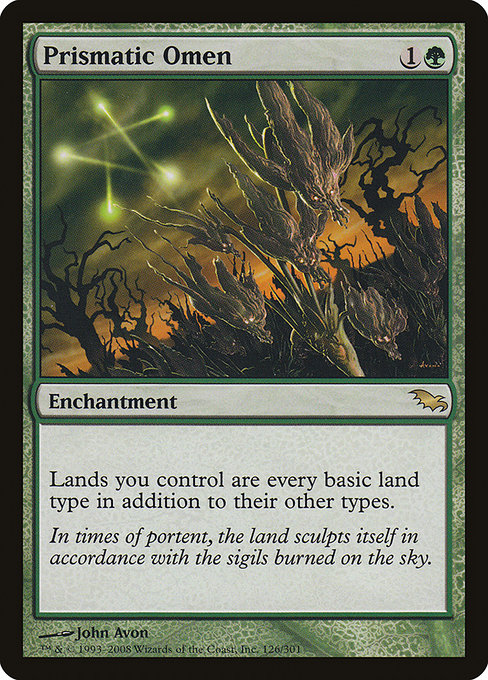 Two cards that I've been a buyer of for the Market Report portfolio are Auriok Champion and Infernal Tutor. The Fifth Dawn (5DN) rare shows up from time to time in the Soul Sisters archetype and has typically sat in the 15 to 25 tix range. There's no reason to think this card won't get back into this price range over the next eight months. If there's anything that can be observed about Modern and its metagame, it's that every strategy eventually comes back into style.

As for Infernal Tutor from Dissension (DIS), this is not a play on a Modern staple as it tied to the Storm archetype in Legacy. It dodged a reprint in MM3 and is another third-set rare from the pre-mythic era. This card will get back above the 40 tix level and has a chance to go to 50-plus tix in the next eight months. There's a Legacy Grand Prix in Las Vegas in June and MTGO is one of the most reliable places to get in regular testing of this older format. Once this card starts to move upward, the short supply can generate massive price spikes. There's also the slim chance that it become a Modern staple with the release of new cards and the development of a new deck. If that event were to occur, it would vault this card into the realm of most expensive Modern-legal card on MTGO. 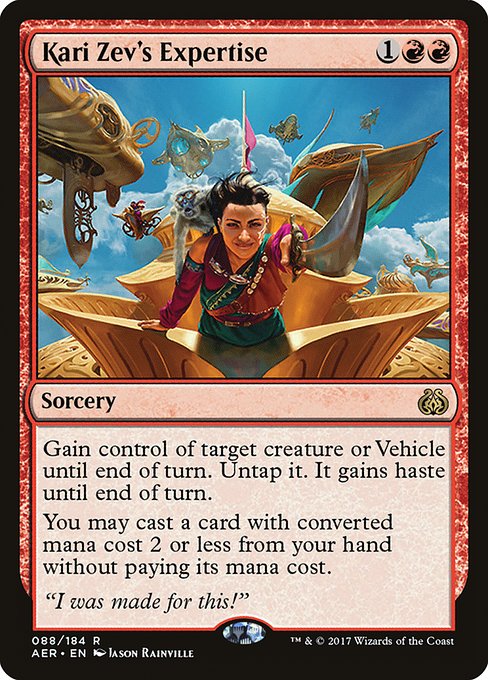 Two cards from Dragon's Maze (DGM) were recently featured in a Saffron Olive brew this week at MTGGoldfish. Fuse is a mechanic that can be abused by the Expertise cycle of cards from AER and the two primary cards targeted for abuse are Beck // Call and Breaking // Entering. Both cards are off of their recent peaks, and it looks like the right mix of cards hasn't been found to vault this archetype into the top tier of decks.

I think it's only a matter of time before a deck evolves that successfully abuses these cards. I would not hesitate to be a buyer of these DGM rares as they drift down in price. For those who are looking for a more speculative pick, Catch // Release is priced close to bulk.

For a complete look at my recent purchases, please check out the portfolio. There's been lots of activity in the last week, so be sure to check out what's been bought and sold. To reiterate, it's an excellent time to be selling down Modern positions that have dodged the reprint in MM3 and selling down Standard positions. Preparing for the release of MM3 with plenty of tix on hand is prudent. Nevertheless, the market is always changing, and this week there is a Standard mythic rare that looks set to move higher.

Archangel Avacyn // Avacyn, the Purifier was a Standard staple prior to the recent banning of Reflector Mage, Smuggler's Copter and Emrakul, the Promised End. It used to sit in the 12 to 14 tix range, with a few peeks above the 20 tix level. Since the bans and the release of AER, it's drifted down as low as 10 tix before recently recovering to 12 tix.

It's recently seen some play in the Mardu Vehicles archetype, highlighted by multiple copies in multiple decks at the  Magic Online Championship event this past weekend. At current prices, there is limited downside to owning Archangel Avacyn // Avacyn, the Purifier. It's a flagship card from a Shadows over Innistrad (SOI), and this is a set that will be redeemable until well after it leaves Standard. A swing to the upside will be tied to whether or not the Mardu Vehicles archetype adopts this mythic rare in order to battle the Standard metagame. If this is a trend that takes hold, a return to 20 tix is not out of the question. I've been a buyer at 12 tix this week for the Market Report portfolio.