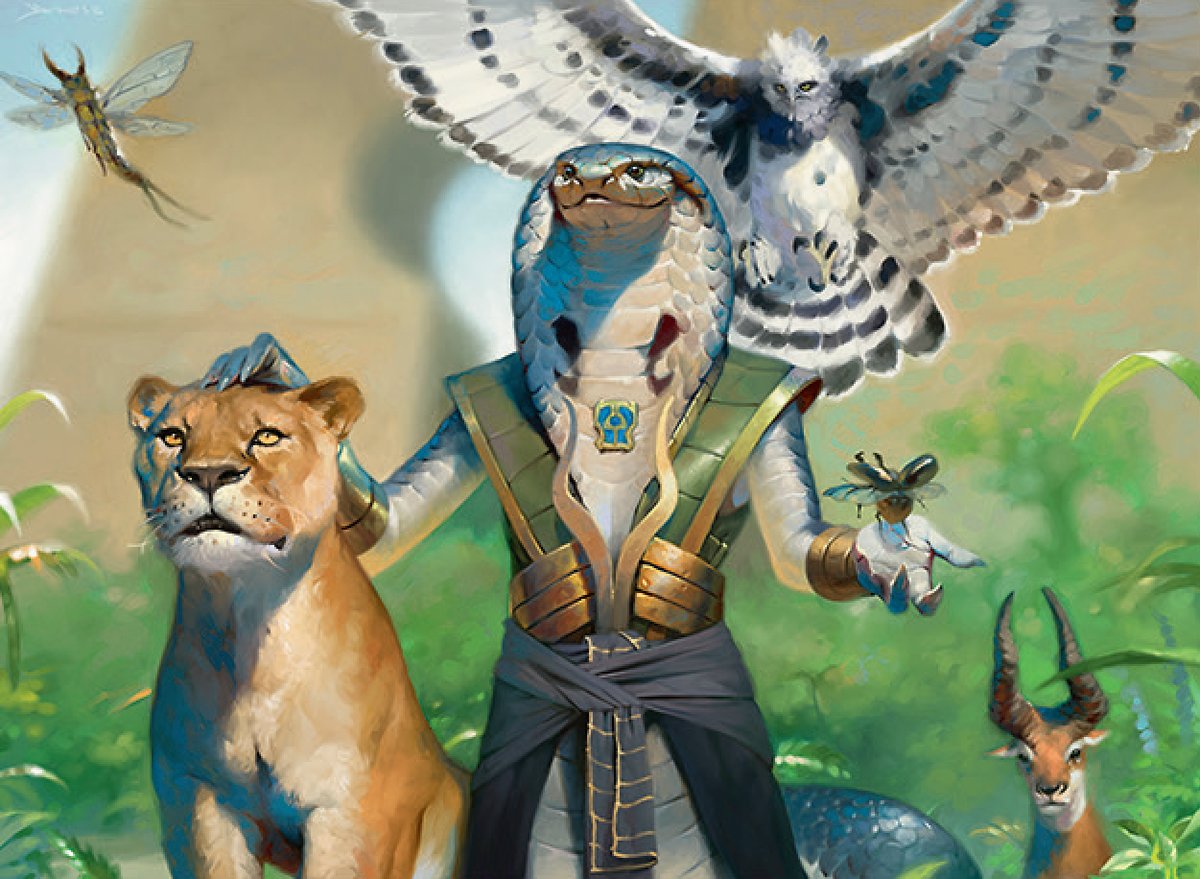 Everybody is downloading The Bangles' "Walk Like an Egyptian" in anticipation of Amonkhet. Well, everybody who didn't have it on their phone already (I have it on vinyl because I'm cool like that). I had a friend summarize collecting records pretty well: "The thing I like most about collecting records is the tremendous expense and inconvenience..." It checks out. Kind of like collecting Reserved List cards.

Anyways, here comes a new block, Amonkhet. It looks pretty awesome. The new Masterpieces look sweet and the set is not too shabby either. I'll say that it looks like we are taking a step back from the very high power level of Kaladesh block—but as long as the cards provide a fun gameplay experience, that doesn't bother me too much one way or another.

Let's take a quick look at what we've seen so far and discuss some of the cards that are bound to be players or pretenders in the near future! 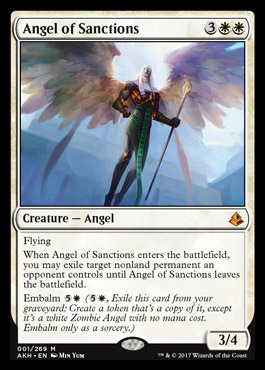 Angel of Sanctions is good card but clearly not on the same level as Archangel Avacyn // Avacyn, the Purifier. Anytime I'd consider bringing this card to the table I would rather just have Avacyn instead.

This is not a card I anticipate playing with until after Avacyn leaves Standard—and even then it would only be to fill a very specific niche in a sideboard. Don't preorder. 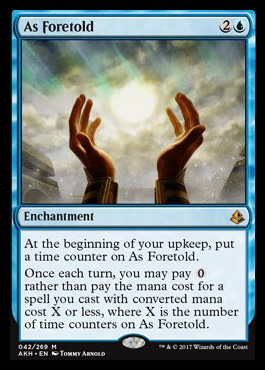 My reaction to this card was, "Wait, whaaaaat!?" It's obviously very powerful because it does one of the best things that a card can do in Magic: generate mana!

The obvious place where a card like this will really shine is in Modern. In particular, this card feels great at casting cards without mana costs that are meant to be cast off suspend.

Ancestral Vision is already expensive but Restore Balance feels like a very spicey speculation target right now. It's a very powerful effect to just slam down with As Foretold. I don't feel like As Foretold will be a huge player in Standard (I could be wrong here) because it does seem kind of slow to build up and the games feel very fast right now.

With that in mind, I expect its value to drop considerably as the primary demand will be for Modern. I think the better spec targets are likely things that could be good in an As Foretold Modern deck. 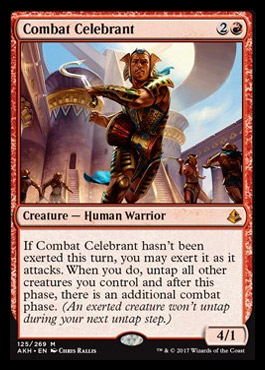 I think this card is potentially very underrated. The presale price seems fairly accurate for what I'd expect a card like this to sell for. However, I think there is potential for this card to be in the $10 range if it has a great deck.

It hits pretty hard and the ability to generate another attack step is pretty grand. I see this card as a potential combo with Reckless Bushwhacker—for five mana you give the Celebrant haste, pump your entire team, and attack twice. If there is an aggressive red deck, I feel like this will be its backbone.

Celebrant is a card I'm potentially interested in picking up early. 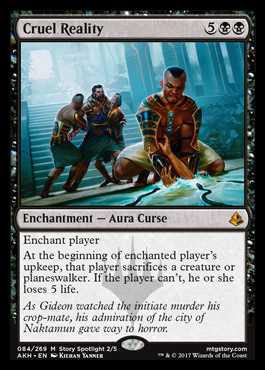 It will be a cruel reality to open this junk mythic and feel pretty bad about it. 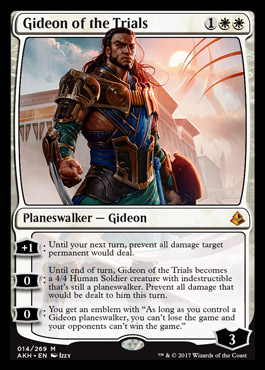 Three-mana planeswalker that is obviously great? Sure, why not.

Cards like these kind of annoy me from a design standpoint. It's obviously very busted and will be frustrating to lose to in Standard. It'll also be a-crewing the Heart of Kiran.

With that being said, I don't think this is an objectively better card than the last busted Gideon. The $50 presale seems ridiculously high. I'm going to try and avoid having to own this card in lieu of borrowing it until the price comes down by half, which is what I would expect. 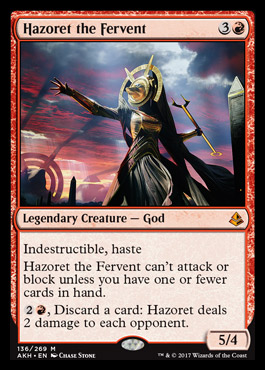 I think this card is potentially underpriced right now. It is obviously powerful, and the ability to trade cards for Shocks is potentially great. Especially in a red deck where we don't want to flood out in the late game. The big haste body for four mana is grand.

It is awkward that the creature can't attack until we get hellbent. Hazorat seems at its best in a RB Vampire/Madness strategy where we can ensure we get hellbent and get value out of discarding cards.

My spider sense tells me that this is a "build around me" card that could potentially be a big deal in Standard. It's not a done deal like Gideon, but I feel like some of these red cards hold a lot of promise. 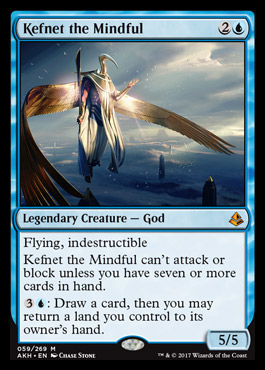 I find this card really confusing and I'm not exactly sure what to even do with it.

It feels like a win condition in a counterspell deck, where you want to make a lot of land drops, leave mana open, and deploy a cheap finisher. It is also kind of cool that Kefnet will allow us to potentially bounce cycling lands in the lategame and turn them into relevant spells.

Kefnet is the kind of card where it's pretty obvious that nobody knows exactly what to do with it yet. So if you figure something out, you'll be ahead of the curve to buy in while the price is low. It's also possible these gods are just not very good. These kind of cards are so unique that it is difficult to tell whether they will be duds or studs.

I'm more inclined to think they will be good than bad. This kind of unique, flagship card is the type Wizards often pushes for Constructed. It's pretty weak-sauce to print literal gods and have them be weak.

These might be good cards to think about buying while the presale price is low. If and when pros start writing about them and calling them good, the presale price will go up substantially. That's not guaranteed, but I wouldn't bet against it. 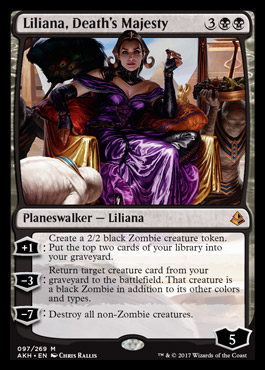 I don't actually think this card is very good for the cost. Gideon, Ally of Zendikar is more powerful in the abstract and costs a full mana less. I mean, most cards are worse than Gideon—being so doesn't disqualify you straight-up from constructed play—but I'm just not feeling this walker.

Liliana also competes with Ob Nixilis Reignited in the five-drop walker spot and I think Ob Nix is also a better card than Liliana. My thought on Liliana is that it will see play as a one-of in the board of The Rock decks for grindy matchups.

I'm not even remotely interested in this card at the $25 buy-in price. Durdly 5-CMC walkers are not what Standard is about right now. 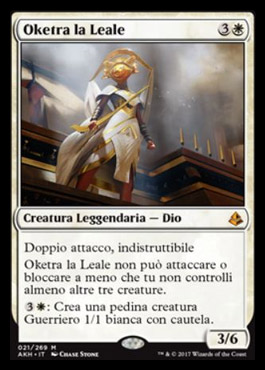 I know I already put in my two cents about my dislike for cards that are obviously OP, but I'm going to dip my toe in the water one last time.

Metagames are about context. The cards that are good or bad occupy that space based on what available cards see play. Gideon, Ally of Zendikar is so powerful for its cost that I'm not interested in playing other four-mana white cards.

Sorry, Oketra the True—but that means you don't make the cut. The tension between Gideon and everything else in the white mana curve is real. It will likely smother this card out of constructed play. 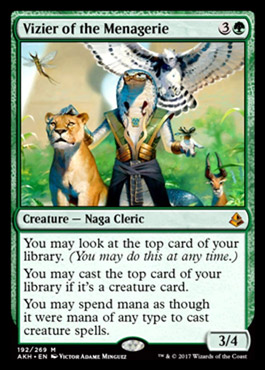 Vizier is yet another four-drop that will compete with Gideon, but it doesn't really go in the same decks which gives it a chance to shine. It feels like the type of card that would have been hot fire in the Theros-era green devotion decks. I think we'd want this in a deck that generates a lot of mana and can chain things together. It's a decent body but we would play this card for the mana and card advantage ability. It obviously draws a comparison to Courser of Kruphix, which was a great card (and still is in Modern).

The difference between three and four is pretty huge, and I almost think I'd rather play lands from the top of my deck than creatures. However, it is cool that there isn't a one-creature-per-turn clause on the card, which means we could potentially chain lots of cheap critters together in the same turn. If there's a deck that allows these kinds of shenanigans to take place, this could be a real card.

It's also worth noting that there is the potential to do something special with this card in an eternal format. Maybe we could Glimpse and draw through a deck full of Kobalds or Elves or something? Summoner's Pact can also find this card—so it could be considered as a target in Legacy or Vintage Elves.

Well, Amonkhet looks pretty fun so far. I like the new cards and they feel like they have a unique feel. Gideon of the Trials is probably the card most likely to have a high impact in Standard because 3-CMC Walkers are always nuts (especially so with Heart of Kiran). As Foretold feels like it has a lot of busted applications in Modern or Eternal.

All things considered, I'm looking forward to jamming these cards very soon, and continuing to jam to The Bangles.

3 thoughts on “Insider: Under- and Overrated Mythics in Amonkhet”