A lot can change in a week. I was all set for SCG Baltimore this weekend, and then two things happened. First, some family issues came up that would unfortunately prevent me from traveling to play Magic. Second, Devoted Druid and Vizier of Remedies spawned a new(ish) archetype that, well, changed everything. What was good last week is suddenly obsolete. Welcome to the frontier of Wild West Modern. Hope your reflexes are sharp. 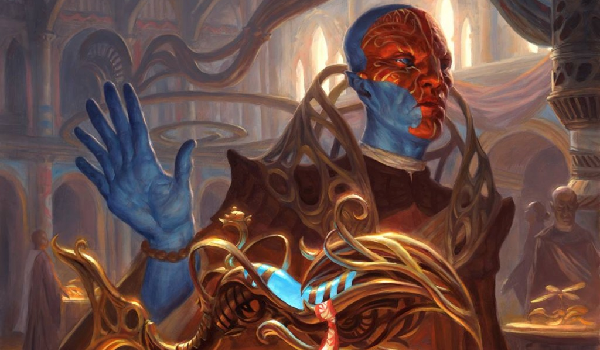 My article this week will continue my preparation for Baltimore that I began last week, and talk about what I was planning on bringing to battle on Saturday. I’ll hold off on the Vizier Company discussion until next week at least, as even though I won’t be playing, I still have a ton of work and outlook on the format that I’d like to discuss.

What I Would Have Played

Prior to Vizier of Remedies turning the format on its head, Modern was for the most part a known entity, and I was confident I had found a decent angle with which to attack the format. Affinity, Eldrazi Tron, Death’s Shadow, Dredge, and UR Storm were the top decks to beat, with midrange decks, Burn, Ad Nauseam and Knightfall waiting in the wings. This is what I planned on taking to Baltimore:

If you read last week’s article, then it’s possible that my eventual deck choice doesn’t come as a huge surprise. I didn’t have a ton of time to test, but I did have enough time to explore a few options, such as Eldrazi Tron, Burn, and UR Storm. Before delving into Grixis Death’s Shadow, here are some quick hits on what I thought about these archetypes and why I eventually moved on.

Eldrazi Tron’s identity in this format is less ramp-combo and more midrange, which is the primary reason I wanted to test it as a potential option for Baltimore this weekend. RG Tron always leaned a little too heavily for me on having the right mix of ramp/lands/payoffs, and if it's opponent wanted to beat it, they could succeed with a conscious sideboard.

Eldrazi Tron operates differently in basically every way. Unlike RG Ramp, they have a ton of things they can do before seven mana, and don’t need to hit their top end or assemble their combo to win the game. Where RG Tron had a ton of dead draws late (assuming their initial threats were dealt with), Eldrazi Tron keeps the threats coming well into the lategame.

I abandoned the deck due to a combination of card availability issues, personal bias, and in-game negatives that I just couldn’t get over. I had a feeling that UR Storm would be popular on Saturday, and was worried too many Blood Moons and not enough early interaction from me would complicate the matchup. Burn and Affinity are also just a little too fast for my liking, even though both matchups are winnable.

I liked a lot of what Eldrazi Tron was doing, but I didn’t feel like I was leveraging my preparation and knowledge of the format into an archetype that would properly reward me for my work. Again, I definitely acknowledge some bias in this conclusion, and wouldn’t fault anyone for playing Eldrazi Tron, as the deck is clearly strong. 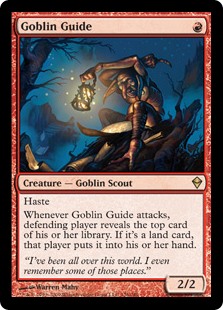 Burn was another deck that I wanted to try. I already had some experience with the archetype, and felt it was positioned fairly well for the weekend. What do Affinity, Eldrazi Tron, Dredge, and UR Storm all have in common? No white! Lifegain is (was) currently at an all-time low, with no real control deck putting up results, and Abzan showing diminished numbers as well. With people also trimming Lightning Bolt, I felt Goblin Guide would often manage to stick around for a few hits.

In the end, I just couldn’t pull the trigger on bringing Burn to a large event. I know that stigma has been disproven before, but I really wanted a great sideboard, don’t get to play paper Magic that often, and was hoping to enjoy my rounds—I don't love playing Burn.

By the time I got around to UR Storm, I was almost out of time, and I knew I would do myself a disservice by sleeving up the complicated combo deck without putting in the requisite reps.

And that brings us to Grixis Death’s Shadow.

This deck checked a lot of boxes for me. I was intimately familiar with the color combination, having played pretty much every Grixis deck viable (and not viable) over the past few years, so I already had a lot of the groundwork done when it came to numbers and the sideboard. I had recently played the deck for a two-week period, so once I had my sights set on where I wanted to be, I only had to test the updated list to get reacquainted with the deck's sequencing and roles. And, well, I really wanted to do well with a deck I enjoy playing. I am what I am.

So, the list. I knew pretty early that I wanted to go down to three delve creatures. After a couple weeks of testing I was getting double delve creatures in my opener a little too often for comfort, and I felt like the graveyard hate would be a little too plentiful with Dredge still lurking around in people’s minds. I was prepared to transition from a classic Death’s Shadow Aggro deck in game one into a more reactive shell postboard, and I knew that if I expected graveyard hate to be out in some number, Liliana, the Last Hope is not where I wanted to be. Liliana of the Veil, on the other hand, is more than capable of winning games by herself, and is better than Liliana, the Last Hope could ever try to be against decks like Burn, Eldrazi Tron, and UR Storm.

If the subgame were all about value, and replaying creatures as much as possible, I'd find a way to play three Kolaghan's Command in the maindeck and I definitely wouldn’t be trimming on delve threats. But as it stands with the stock build, the deck is a little too one-dimensional for my tastes. There’s a difference between graveyard synergies and relying on your graveyard to win, and if we're in the latter camp, why not just play Dredge? I’m not saying that Grixis Death’s Shadow can’t win without the graveyard, but I definitely want to be above just a couple threats once my opponent sticks a Rest in Peace or something.

Vendilion Clique is a powerful alternative threat that can help shore up some of the points lost against combo, since I’m making room in the maindeck for a third Lightning Bolt in place of Stubborn Denial. I’ve found that in game one, when I’m losing, it’s not to spell decks, thanks to my six discard spells. I’m getting run over by creatures, and Stubborn Denial is far from ideal against Etched Champion. Vendilion Clique and Lightning Bolt over Gurmag Angler and Stubborn Denial might seem like a big change, but in practice, it just trades a bit of value in one area to regain it in the form of another card. Same number of threats, same amount of disruption. 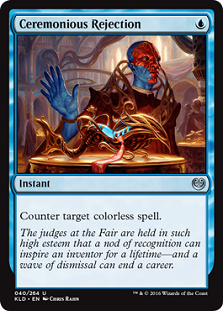 Based on what I was seeing in the MTGO metagame, my high-priority targets were Eldrazi Tron, Burn, and UR Storm. Ceremonious Rejection is a nice bit of spice that, while narrow, handles every single spell Eldrazi Tron can throw at us for one mana. I debated for a while about the numbers between Fulminator Mage and Ceremonious Rejection, eventually settling on two of each, but I could definitely see cutting both the Fulminator Mages for a third Rejection and an Izzet Staticaster. With this list, I’m going all-in on my bet that white won’t be showing up in large numbers, thanks to Eldrazi Tron, but a little hedge can't hurt.

With this list, what I’m most proud of is my post-board configuration against Burn. Nobody likes losing to that deck, and I believe I’ve found a solid configuration that gives me an edge in the matchup without diluting my sideboard too much against other matchups.

Collective Brutality, Stubborn Denial, Kolaghan's Command, and Liliana of the Veil combine to provide a ton of discard and countermagic, especially when added to our maindeck spells. Our goal is to run Burn out of cards as quickly as possible and sneak in a quick threat. We don’t have much to board out after Street Wraith, and I end up keeping a couple Thoughtseize in; Deflecting Palm is popular, and even turning Bolt into Shock can be the difference between winning and losing sometimes. Thoughtseize is by no means a great plan, but it is definitely serviceable in many situations.

When I was still planning to attend SCG Baltimore, I was pretty confident in this list. I felt certain that I had done the appropriate amount of work, avoided common preparation pitfalls, and put myself in a solid position to control my own destiny. Vizier Company has turned the format on its head, though, taking advantage of a lack of one-mana removal and counterspells. Will Spell Snare be the best card of the weekend? Lightning Bolt doesn’t solve everything, but it certainly helps. It will be interesting to see how everyone reacts to this new development, only a week before SCG Baltimore. I’ll see you on the other side.

2 thoughts on “Baltimore Prep, Part Two: Everything Has Changed”