Hey guys, I'm here this week to give you my set review of the critically acclaimed Modern Masters 2017! It might seem a little weird reviewing a set so far after release, but I have found many people asking the same questions over and over about the cards contained within. I wanted to take the time to explain my thoughts about how the set has shaken out so far, where it's trending, and what this means historically for the future. 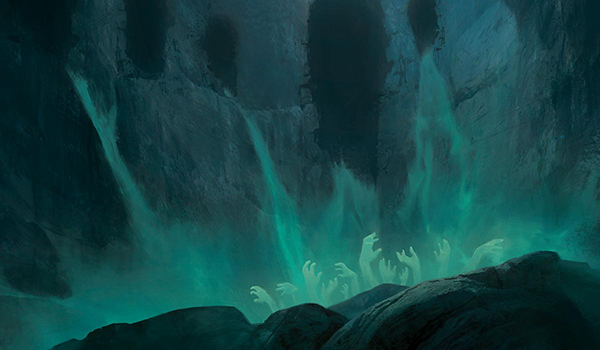 In today's article I'm going to talk about the mythics. Join me next week for the rares. I'll cover all the cards that I think are interesting from the financial perspective, and along the way offer my thoughts on broader trends in general. For each card I'll provide a short-, mid-, and long-term prediction of its retail price.

Cavern of Souls is a highly anticipated reprint that was originally a rare but upgraded to mythic in this set. Avacyn Restored copies of the card peaked at about $62 before the reprint. The Modern Masters 2017 pre-order price started conservatively around $35 and saw a brief dip on release weekend as all cards did. Right now it's trending up and I don't expect that to change for the short term.

I predict the future of this card to look a lot like Mox Opal from Modern Masters 2015. It will stay around $40 for the rest of the year before the year-end sell off. In early January, when people are ready to get back into Magic and looking to spend their holiday cash, it's likely to go up. The card is pretty important as a mana-fixer and provides a lot of utility against counter spells—that may be obvious, but unlike other dual lands its effect is not easily replaceable. If we get significant tribal support in Modern the rest of the year, we could see it pick up in price quicker and threaten to regain its former $60 price tag. The price tag next year will look pretty cheap for this card as its demand is unlikely to be satisfied by the supply brought by MM3.

The pre-order price went from $45 down to $35 on release weekend as people tried to break even. Now that people are drafting Amonkhet and not really busting boxes of MM3, the price is actually higher before the reprint (and higher than its pre-order price). According to MTGGoldfish's play data, Snapcaster Mage is in 11% of Modern decks with an average of three copies per deck. One of the few creatures played more than that is Noble Hierarch which is a whopping $70 now, despite being reprinted as a rare in MM2. I would not be surprised to see $100 Snapcaster Mage sometime next year.

The slight light at the end of this tunnel may be Iconic Masters. Now I'm not going to say to put all of your eggs in this basket, but as far as blue cards that are iconic and reprintable go, Snapcaster Mage is high on that list. I'd say there is a small chance that all of the Invitational cards get reprinted (maybe with their original art?). If you're unfamiliar with them you can find them here, but the most Modern-relevant ones are Ranger of Eos, Dark Confidant, and Snapcaster Mage.

Liliana is an odd case. A lot of players (despite being misguided) thought that returning to Innistrad meant we were going to get a standard-legal reprint of Liliana of the Veil. Obviously that did not come to fruition (although the Liliana we did get was pretty great)—that caused a big spike as people had been putting off buying her for a while. Since her reprint her price movement has been a little rocky, but I'll try to explain what's going on.

Liliana is a key part of a very expensive set of decks. The Liliana/Dark Confidant/Tarmogoyf line-up has been rock solid for years—because of this, Lilianas themselves are not terribly valuable to the average player. Release weekend has its usual price crashes as people rush to sell. Now it has crept back up as players who were waiting for the reprint start to buy in.

The future of the card likely relies on how the most recent ban announcement affects the other formats she is legal in. At this point it stands to reason that her popularity in Legacy could be greatly affected by the banning of Sensei's Divining Top. I am not knowledgeable enough about Legacy to make a prediction as to how players will respond, but I think it is important to consider the worst-case scenario for players that need her. If the decks that play Liliana start to make up a larger share of the playing field in Legacy, we may see her increase in value. If the cards she is naturally good against (like True-Name Nemesis) increase in popularity, she may also increase in price.

That being said, she is also what I would consider an iconic planeswalker. I think if they are to include any planeswalkers in Iconic Masters, Liliana of the Veil is on the shortlist with Nicol Bolas, Planeswalker, Jace, the Mind Sculptor, and Karn Liberated. Honestly, it's hard to tell what's going to happen in her future until we get spoilers for Iconic Masters.

Hey, you didn't think it would be all bad news in this article, right? Linvala, Keeper of Silence is largely a success story due to the fact that its price was entirely hinged on rarity and not the play it sees. Linvala is a rare and very powerful Angel for casual decks as well as competitive decks. Due to the fact that most decks that play her only play one (as a Chord of Calling target), I don't expect any rebound anytime soon.

A close analogue you can use is Elesh Norn, Grand Cenobite. While the white Praetor has more in common with Craterhoof Behemoth, both it and Linvala are singleton competitive cards with some casual backing. I wouldn't be surprised to see Linvala back around $12 in a year.

Tarmogoyf had an unusual price history so far. It actually went up in pre-order pricing briefly due to a Crystal Commerce error that caused stores to be de-listed from TCGPlayer (which is where MTGStocks data is gathered from). So its spike is actually a result of some very odd technical glitches and not actual demand.

Since then it has been steadily trending downward, despite being the 2nd most popular creature in Modern after Noble Hierarch. I want to take a minute to point out the success of Modern Masters sets bringing the cost of Tarmogoyf from its peak at $209 down to $85 over the course of two years. This gradual decrease finds a happy medium between satisfying new players and pre-existing owners. That being said, this is the third time we've seen Tarmogoyf get reprinted, so I'm not sure that it will be able to climb back over $100 even in a year. Most people that want them have them at this point. You can also make the argument that it's a very iconic card—keep Iconic Masters in mind if you're not in a rush.

The last card on my list is Voice of Resurgence. It's the lone card worth mentioning in Dragon's Maze now that Beck // Call and Breaking // Entering don't work anymore. This is a staple of decks that are just not very popular. It's not a popular casual card and I'm hard pressed to find any reason it would really increase in price. This will probably bottom out at $8-10 and then slowly creep up year over year as supply dries up. This will be the quintessential card in 2019 whose price people will be surprised by.

The remaining mythics are trivially expensive (Past in Flames) or not applicable in most Modern decks (Craterhoof Behemoth), and thus don't need to be covered in great detail. They will likely continue to fall in price throughout the year until December, and then make the slow creep back up to their original price over a number of years. If these are cards you're looking to acquire, I wouldn't put a terrible amount of thinking into the timing.

I hope you enjoyed this new take on a set review. Whether you enjoyed it or not, I'd appreciate some feedback in the comments below. I plan to do another article to cover the important rares in the set. I would like to know what you found useful, or any questions that I didn't answer so I can include them next time. Thanks for joining me!