Below are the total set prices for all redeemable sets on MTGO. All prices are current as of August 28, 2017. The TCGplayer low and TCGplayer mid prices are the sum of each set's individual card prices on TCGplayer, either the low price or the mid price respectively.

Another week and another sea of red for Standard sets on MTGO. Shadows over Innistrad (SOI) led the pack with a 26-percent decline, with Oath of the Gatewatch (OGW) close behind at 23 percent down. With prices in free fall, it's easy to get an itchy trigger finger and start buying, but from a full-set perspective, this is a mistake.

This week, I was reviewing what I was doing at this time last year, and you'll see that I purchased a lone set of Dragons of Tarkir (DTK) for 56 tix at the end of August. This is a good example of being tempted by falling prices. With all the Modern staples in DTK such as Collected Company and Kolaghan's Command, I though that DTK was getting close to a price bottom. As you can see from the chart below, DTK still had weeks of declining prices ahead of it before it bottomed at about 35 tix. 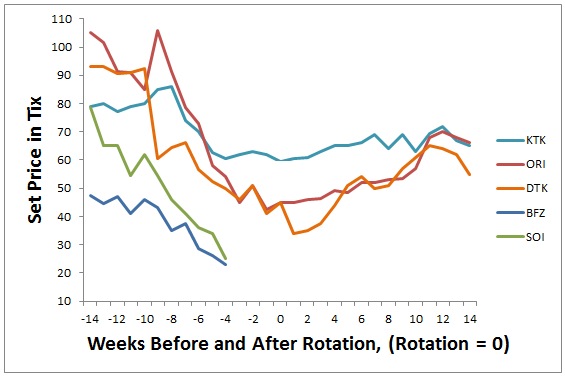 The punchline, though, is that I still ended up selling that set for a profit a few months later. My timing was awful, but the trade was a profitable one, so this year I am being more patient as prices on rotating sets decline heading into September. With that in mind, the downtrends for SOI and BFZ look to be firmly in place, and there's at least two weeks to go before we can expect a price a bottom to emerge. The majority of the decline is already priced in, but waiting for the release of Ixalan (XLN) and fall rotation is still prudent on these two large sets. There will still be opportunity at different times on singles, but keep your powder dry on full-set purchases. 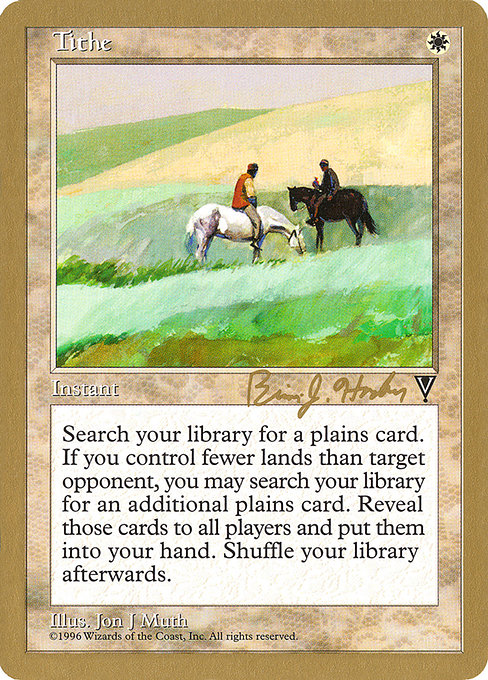 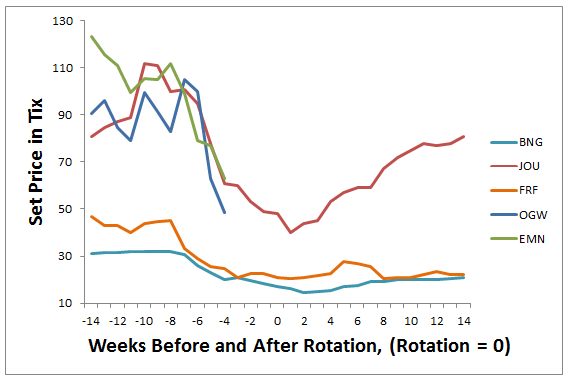 The poster children for avoiding small sets are Fate Reforged (FRF) and Born of the Gods (BNG). Both saw declining prices in advance of rotation, but did not experience a large rebound in price afterward. On the other hand, Journey into Nyx (JOU) saw a steep decline from over 100 tix all the way down to below 50 tix, before rallying again in the weeks after rotation. The question at hand, then, is whether or not OGW and Eldritch Moon (EMN) are similar to JOU, or are they more like BNG and FRF?

Looking at the chart, the two small sets rotating out of Standard are on a similar price path when compared to JOU. Both were in and around 100 tix and both are in the process of a steep decline as week zero of rotation nears. 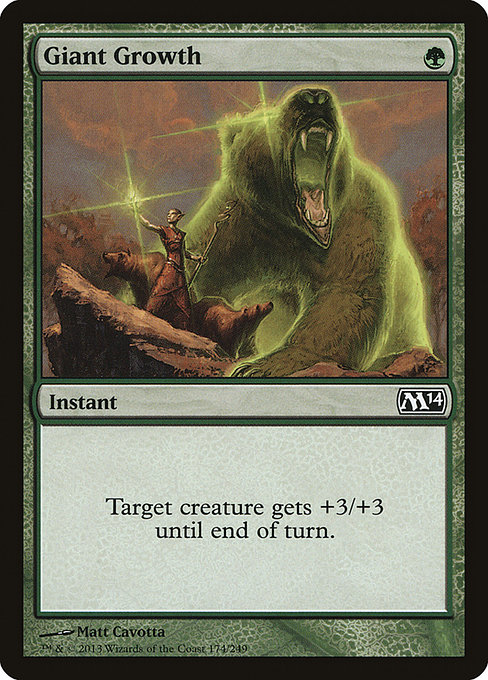 Thus, the opportunity is clear. There are four sets rotating out of Standard, and each of them will be attractive to redeemers. The time to start buying is getting close, but we are still a few weeks away from where set prices historically bottom out. This is the time to be selling down positions and building up tix. The only positions I really want to be in are Standard-related specs and tix. Having a large amount of my portfolio in tix means that I'll be able to take advantage on the pending sales as Standard rotates.

In the age of treasure chests on MTGO, it is no longer safe to be holding positions in Modern staples for the long term. The steady supply of singles spilling out of treasure chests means that a long term position suffers from a steady drip of supply. Only cards that are in decks that are growing in terms of metagame share will get long term price support as players adopt the new deck and buy the cards they need.

With that in mind, it's absolutely correct to be a seller of any and all Modern positions in the next two weeks. Once XLN hits, all eyes will be on Standard and Modern prices will be declining as a result. At that time, it will be too late to try and salvage tix from your Modern positions. I've been a heavy seller of all things Modern-related in the portfolio over the past couple of weeks. As detailed in the Standard section, the opportunity on the rotating sets is coming and the opportunity cost of holding Modern positions is getting larger by the day. 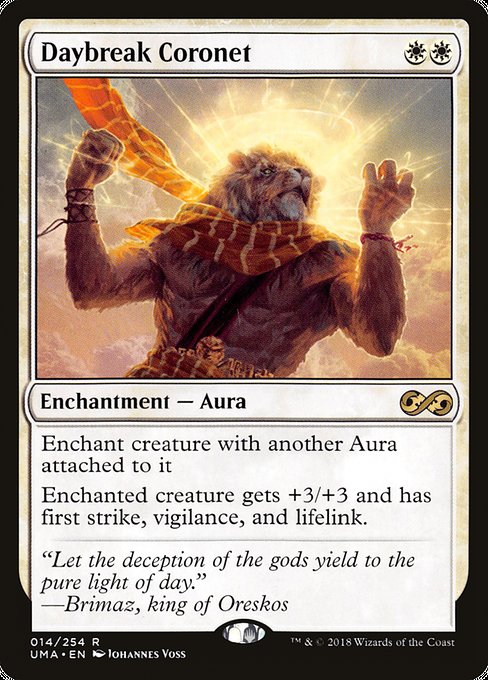 Outside of cards you need to play with, holding Modern cards heading into September is a mistake in terms of portfolio allocation. You'll be much better off getting into tix and then deploying into the rotating sets or into other Modern staples that end up on sale in October. Consider the next two weeks to be the best short-term selling opportunity for Modern cards.

For a complete look at my recent trades, please check out the portfolio. This week I took the plunge on a large position in The Scarab God from Hour of Devastation (HOU). This appears to be the most powerful Standard card in the set, and the market is still coming to grips with this reality. On top of that, we are near the end of the Amonkhet (AKH) block draft window, so the supply of any and all HOU and AKH cards is going to be slowing down. 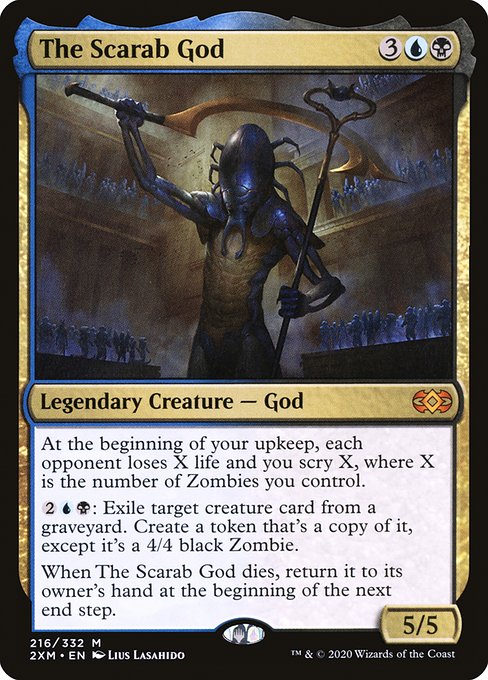 Obviously it's impossible to predict the future of Standard, but the most powerful cards in a set typically go on to reach much higher prices after they are no longer being opened in Draft. This card has also been slotting into Temur Energy builds as a way to fight the mirror, and with Temur Energy looking to be an intact archetype heading into rotation, the chances on this God continuing to see play are high.

If this turns out to be a failed speculative pick, then I will be looking to exit this position before the end of HOU redemption in November. Up to that time, redemption will support the price of this card even if the Standard metagame does not.