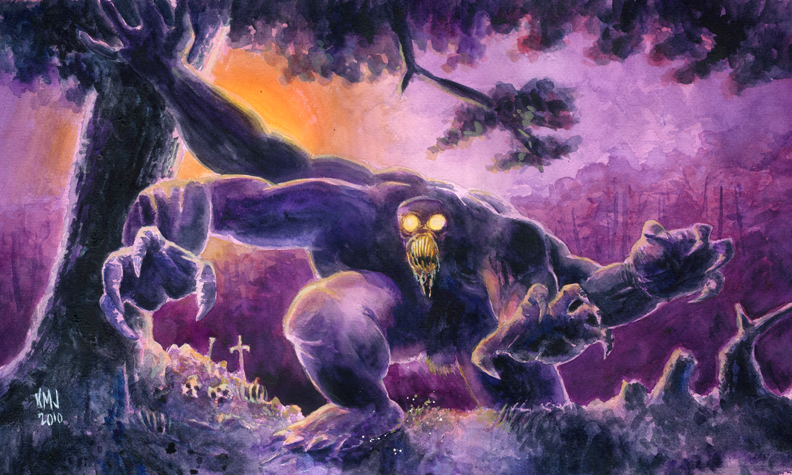 Well, this has surely been one unprecedented week. In all of my experiences within MTG finance (and that spans over six years), I don’t think I’ve ever seen such an organized movement on the Reserved List. All it takes is one glance at the weekly movers on MTG Stocks to see the carnage. (Somehow Junún Efreet poked its head into the top 18 movers). 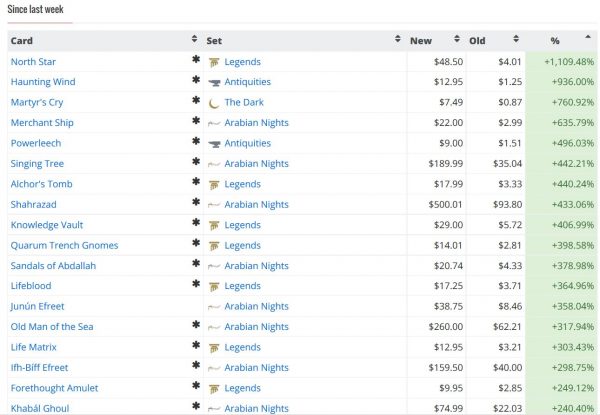 In all I count 62 Reserved List cards (not counting Alpha, Beta, or Unlimited movers) that increased by at least 5% over the past week. That doesn’t include all the Arabian Nights and Legends stuff that jumped despite not being on the Reserved List. 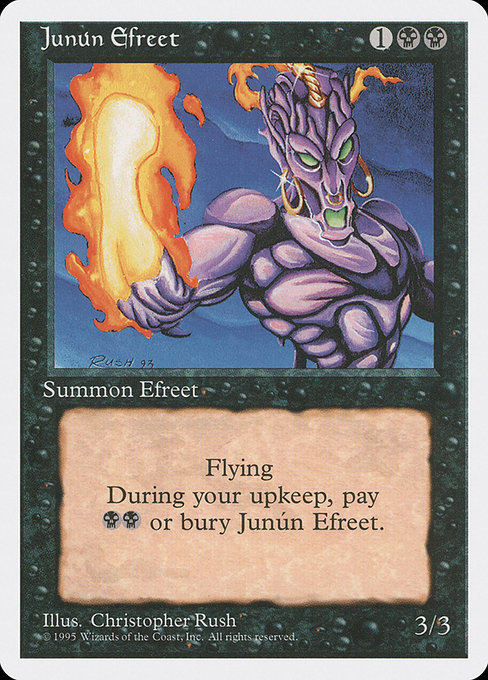 As my readers know, I have been following these trends for a long time now thanks to my deep appreciation for the Old School format. Many folks have been vocal on Twitter, sharing their opinions on the validity of these price spikes (or lack thereof). This week I want to document my perspective as to why this is happening, how “sticky” I think these moves are, and how you should rebalance your portfolio accordingly. You will find I’m not nearly as pessimistic about all of this!

Nearly every Reserved List card that is spiking comes from one of the four earliest Magic expansions: Arabian Nights, Antiquities, Legends, and The Dark. These sets house some of the rarest expansion cards in the game’s history. Below is a comprehensive ranking of how many rares were printed according to Crystal Keep’s website. I highlighted the most interesting rows. 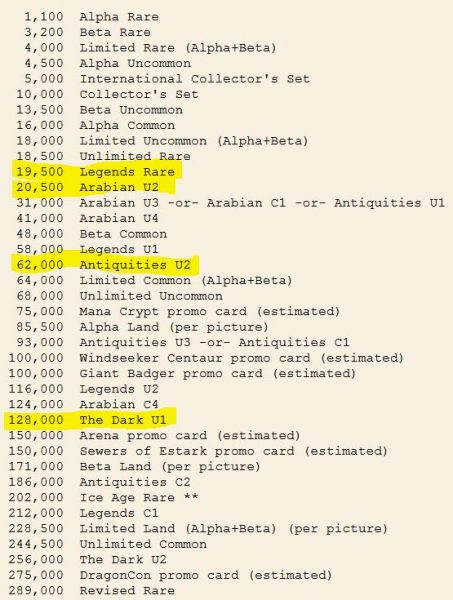 I was actually under the impression that Legends rares and Arabian Nights U2s existed in far fewer quantities. In a recent video from Alpha Investments, Rudy suggested the rarest Arabian Nights cards were fewer in quantity than Beta rares, but this doesn’t seem to be the case.

Still, we can see just how sparse they are: just 19,500 Legends rares and 20,500 Arabian Nights “rares” (U2s). Antiquities “rares” (U1s) are also fairly sparse, with 62,000 printed. Over time many of these cards were likely torn, damaged, thrown out, and flat-out lost to society, making the actual available quantities on the market far less.

While I question some of Rudy’s numbers in an absolute sense, he was certainly right about one thing: The Dark “rares” (U1s) are significantly more prevalent. There are over six The Dark U1s for each Legends rare or Arabian Nights U2. That is going to make it much harder for The Dark Reserved List cards to jump nearly as high as the Legends and Arabian Nights moves we’ve seen.

If I had a nickel for every time a naysayer on Twitter declared how terrible it was to speculate on unplayable Reserved List cards, I’d be able to buy a bunch more of them! This sentiment reflects a lack of understanding of the market dynamics on these extremely rare and collectible cards. To drive a better understanding, we have to examine who is buying up these cards and why.

First off, I’m not going to sit here and pretend speculators aren’t manipulating this market. Of course there are plenty of hands in the pot stirring it up by buying up copies and listing others at exorbitant prices, to create that patented pop on MTG Stocks we are so used to seeing. I won’t deny this is a key factor. But it’s not the only factor and it’s not the reason why prices on these cards will stick far higher than your run-of-the-mill buyout.

Unlike common buyouts, the available quantities on these Reserved List cards for sale on the open market is very thin. A purchase of 20-30 copies is often sufficient to move the needle on MTG Stocks; mopping up about a dozen or two other copies from the rest of the American market is likely all it would take to incite panic-buying. That’s where things get interesting.

You see, “panic-buying” is not from speculators hoping to sell to greater fools. They’re not the ones scrounging the more obscure sites or international retailers to find the remaining copies at the “old price.” These are the collectors or Old School players who have “always wanted” one of these cards, but “haven’t gotten around” to buying it yet.

I’ve seen this sentiment expressed many times over the past couple weeks, and I have even experienced it myself just this past weekend. I’ve been wanting a Guardian Beast for a while now, and I was waiting for that steal-of-a-price to pick up a copy for Old School play. 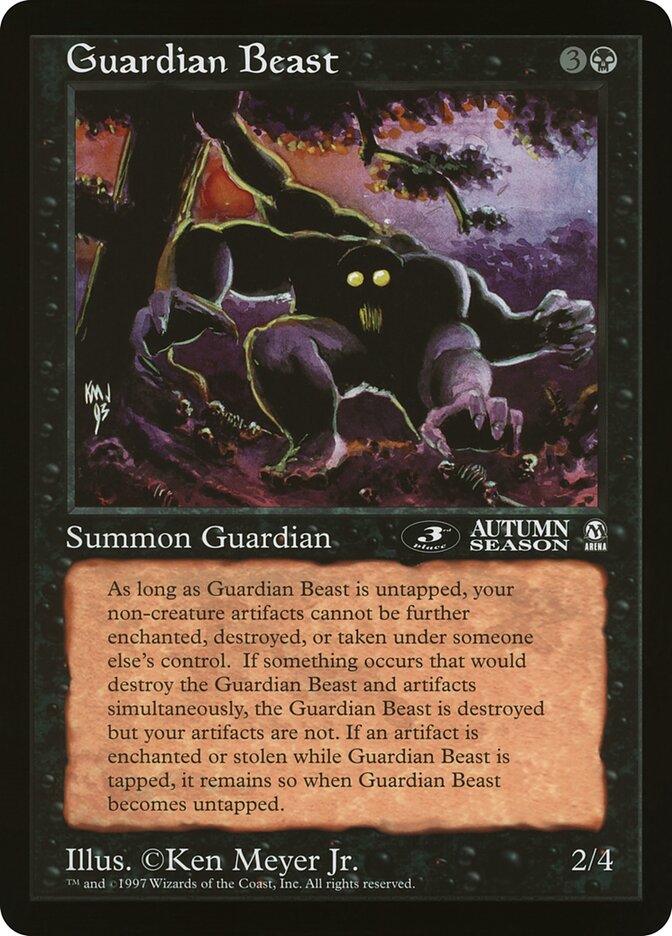 Then the unthinkable happened: the copies I had been watching on eBay—the ones I use to track the market—started selling. Suddenly my price point went from $140 to $160 with a very steep trajectory to $200. With just a few copies left on the market, I had to make a move. I found a Near Mint copy for around $195 and made the purchase without looking back.

The underlying motive for making this purchase was my desire for a copy. The buyout merely catalyzed a purchase I had been planning all along. This is very common for collectors and Old School players. They don’t rush their purchases because the desirable cards are often expensive. Historically, prices haven’t moved all that quickly in this market because copies were purchased only rarely. But now with all eyes on these Reserved List cards, all the latent buyers are coming out of the woodwork en masse.

I have seen people jump in similar fashion on Argivian Archaeologist, Singing Tree, and King Suleiman. These are all presumably unplayable cards, yet it only takes a few people who shift from procrastination mode to buy mode to help the card’s new price stick. If it was all speculators buying these cards, then you’d see people undercutting themselves like mad after a spike.

While this is bound to happen to some degree, a large enough portion of these Reserved List cards are going into the hands of collectors and players. It only takes a few copies of Shahrazad to end their circulation by entering the hands of collectors, and you have a $100 card become a $200 or even a $300 card overnight. 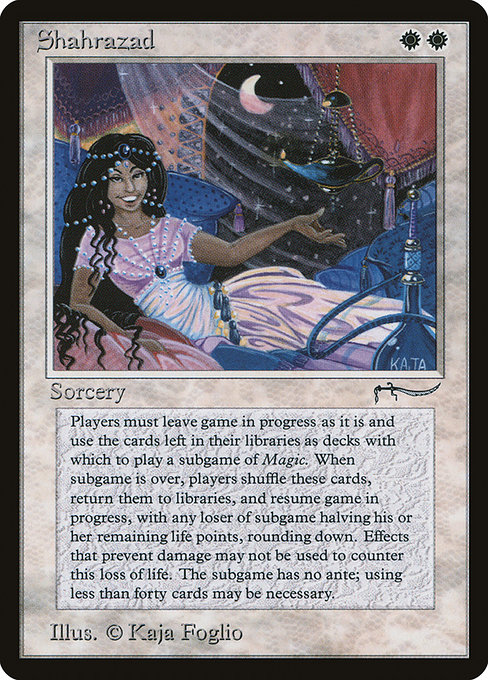 Before we go further, yes, there are people with latent demand for the “less playable” cards like Stone Calendar. The fact that Star City Games upped their buy price on that card to $12.50 is proof enough to me that there is legitimate demand. 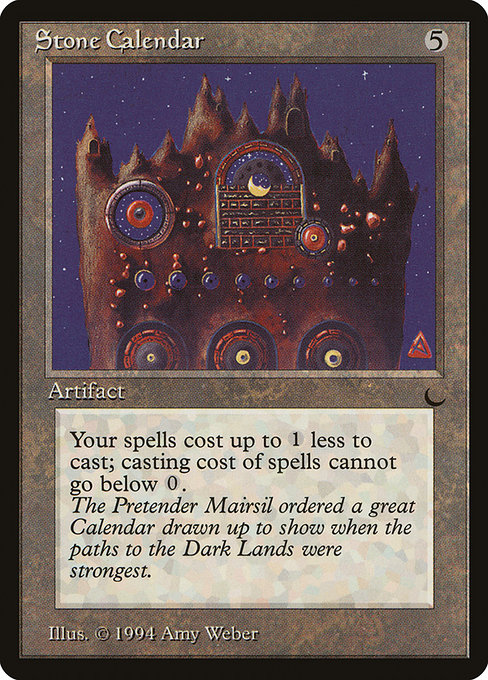 Granted, some price spikes will be stickier than others, and natural market forces will help things re-equilibrate. I urge you not to write these movements off, however. When dealing with such rare cards, the supply curve becomes extremely steep. This means that after only a handful of copies sell due to a bump in demand, the price someone is willing to sell at suddenly becomes much higher. The chart below depicts this concept. 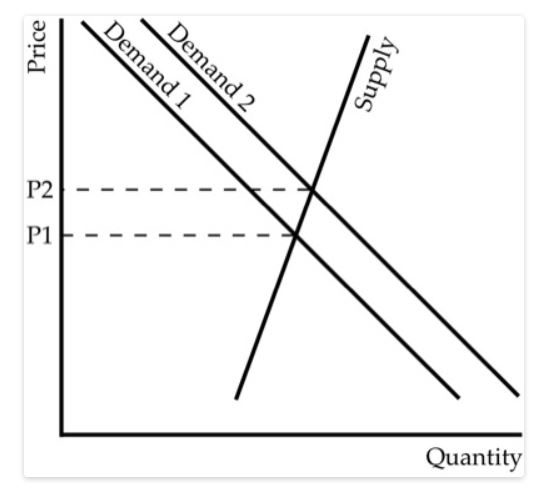 The horizontal movement from Demand 1 to Demand 2 is relatively small, but because the supply curve is so steep, the price increases significantly. In extreme cases, just a couple copies disappearing from the  market would drive price increases well in excess of 100%. This is another reason I bought the Guardian Beast when I did, and it’s why I don’t expect to see cheaper copies show up on the market.

Again, I have to acknowledge that speculators are out there manipulating prices. There’s also real demand and this is having a more permanent impact. But that pales in comparison to what I suspect is truly going on: market cornering. I will not disclose names, but I will say that as I sell a few of these Reserved List cards for profit, I have seen a few repeat buyers. Rumors in the Quiet Speculation Discord channel suggest a few major players are accumulating copies. It’s not so far-fetched, is it?

If this is the case, it could be “game over” for the casual, procrastinating collector. If hardcore investors are putting significant capital into stuff like Singing Tree, these could remain higher for a long time. Sure, a few copies will trickle onto the market—I purchased a Damaged Singing Tree from TCGplayer for $15 Saturday night. These anomalies will surface. 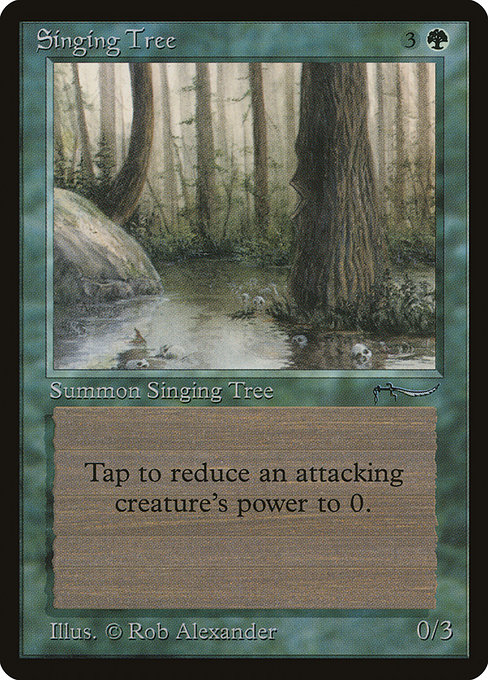 But if there are people out there making consistent purchases of the market to enforce an artificial price floor, it’s highly likely these new price points stick. Perhaps not 100% of the price increase, but a significant portion of them. Think about it… with how rare these cards are—especially the Legends rares and Arabian Nights U2s—it doesn’t take more than a few thousand dollars to buoy a market. With speculators and procrastinating collectors out there to help buyout the rest, we’re looking at higher prices for a long time to come.

With this backdrop, I’d encourage you to buy what you need (that hasn’t already disappeared from the market). But that’s been my message track for months now on this site and I’ve never shifted away from it. Don’t buy out lots of copies of anything, but if you want something for a collection or for play just buy it now. Stop waiting. It may be too late before you know it.

This isn’t meant to be a scare tactic. It’s just a reflection of how I genuinely feel about this market and how easily it can be permanently manipulated. Once a card from Arabian Nights shoots up, it will be a long time (if ever) for that card to drop back down in price significantly. Drop of Honey still buylists for over $300 weeks after its buyout. There just aren’t enough copies out there to soak up the lingering demand!

I know there are many different opinions out there about the legitimacy of these Reserved List spikes. Some feel this phenomenon is a tragedy reflecting Wizards’ poor decision to continue enforcing the Reserved List in the first place. Others blame reckless speculation on “unplayable cards” from the MTG finance community. Both of these factors are of course at play here.

But I think there’s something unique to this market that sets it apart from the rest. These cards are:
a) extremely rare,
b) nostalgic and collectible,
c) in demand from procrastinating collectors/players.

All three of these factors combine for a backdrop that suggests the higher prices are here to stay. Add in the possibility that heavy hitters in the MTG investing world may be making a dent on supply, and you have the recipe for higher prices. These are the reasons I’m taking the buyouts seriously, actively participating by attempting to purchase a few copies near old prices where possible. I keep one for myself and sell the other couple I manage to acquire. (I am a collector too, after all). I never go deep on this stuff because it’s slow and difficult to move.

That’s how I’ve approached this environment and it’s been fairly successful. I’ve made some profits on these spikes while also expanding my Old School collection for personal enjoyment. My goal is to make this hobby cheaper while I save for my son’s college education, and these buyouts have helped me accelerate that goal nicely.

To eschew these moves is to ignore one of the most fascinating portions of the MTG market, and to me that is reckless. But I recognize everyone has their strengths and weaknesses; I’m just thrilled to see the market move where I have the most knowledge and interest!

8 thoughts on “Insider: The Reality of the Reserved List Buyouts”