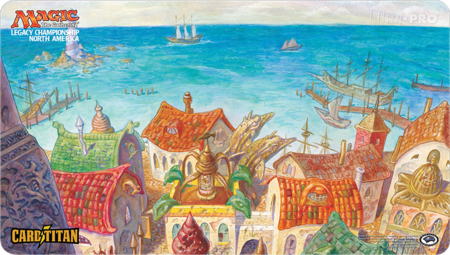 Magic finance isn't just about speculating on cards. Technically, there are other avenues in the Magic collectible market that we can venture into as well. Today, I'd like to explore the wild and crazy world of playmats.

Let me start by saying that I remember those sad, barbaric times before playmats ever existed. You'd roll up to a Grand Prix or a PTQ and pray to god that the event had table cloths. If it didn't, you were in for an afternoon of dragging your sleeves across some sticky surfaces!

Playmats were a huge innovation and a godsend. They allow players to keep their cards off of suspect surfaces and they also allow players to personalize their space. When you are slinging on one of your all-time favorite mats it feels like you've got home-court advantage.

As it becomes more and more difficult to find great investments in Magic (everybody knows much of the same information all the time) sometimes we can get rewarded for thinking outside the box. Actually, I've found that thinking outside the box is one of the few great ways to get ahead in the MTG marketplace. That, and doing really smart and proven things over and over again...

Anyways, today is going to be a fun one because I'm going to rip through some of my all-time favorite playmats. First, before I get down to business, there are a couple of things I'd like to bring to the table about playmats.

First of all, they are kind of personal. People like different things. If I sit down and have to stare at the same image for fifteen rounds, the thing I choose to look at will probably be different from you or the next person. When it comes to investing in playmats, I think there is a lot of opportunity for subjectivity to pay dividends. If you look at a playmat and it it makes you feel something—you're like, "That looks awesome, I want it"—chances are that other people will feel the same way.

I also like playmats because they are such an obviously fantastic visual representation of Magic: The Gathering. I have several playmats that I really enjoy and have framed them and hung them on my wall and they look super awesome that way. They are large, colorful, and they really tie the room together. Framed playmats are a really nice addition/conversation piece in any game room. As the target audience of Magic continues to grow (let's be fair, we're not getting any younger...) the demand for this kind of stuff also goes up.

People remember the fun times they had at some of these events and want to find the mat again. Or, maybe they are just more willing to spend a little bit more to have a nice piece to display. Either way, the marketplace for mats really hasn't changed much in the past five years and I'm thinking maybe that is a nice place to make a few nice investments.

To be fair, I've always been pretty easy going about picking up the mats that strike me and I've done unreasonably well with my picks. Who would have thought other people would also want a playmat with Library of Alexandria on it? It's not like it is easily one of the five coolest and most iconic pieces of artwork in the entire game.

I know I prefaced today's offering with, "Buy what you like." I believe this is great advice. However, just for funsies I'm going to roar through my eight personal favorite playmats of all time.

Nick Coss is a boss. The Eternal Weekend playmats have all been fantastic over the past few years but I have a particular soft spot for the Rishadan Port one.

Port is such an iconic card and it has an awesome busy vibe to it. There is a lot going on in the image which gets lost on the small format of a Magic card. With the image blown up many times larger you can see the buildings and ships in great detail. There is so much going on that it is almost distracting!

I love cards like these because they are the epitome of the glory years of the old times in Magic. Whether you are playing with it or displaying it on a wall—this is a gorgeous mat. 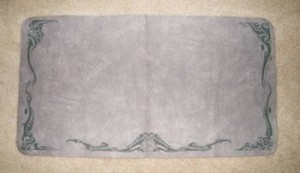 These are for the collector who wants to represent the true old school. These were the first playmats that I ever remember seeing and they have more of a cloth feel to them than the mouse pad feel of a modern mat.

The Spellground Mats might be a little bit antiquated by modern standards (they are less functional than a newer mat) but you're really paying for the novelty and nostalgia.

Another really neat aspect of these mats is that since they were typically colored but blank in the center, they make amazing canvases for artist alters. Back in the day, having one's Spellground mat altered by Mark Poole or Christopher Rush was like the Holy Grail of fandom. Now that Chris has passed I really wish that I hadn't been "too cool for school" to wait in line to have a Spellground Mat altered by him.

I did wise up eventually. I have a custom Black Lotus drawing on a blank playmat that I'm grateful to have had done. Nonetheless, Lotus on a Spellground is absurdly cool. I haven't seen Amy Weber at any events lately, but Time Walk on a Spellground also potentially seems like one for the wall. Or a Juzám. Or a Birds. Or a Mox Emerald...

You get my point. 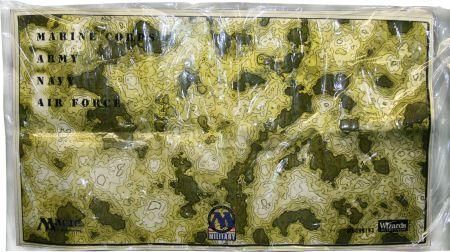 I wouldn't pick this for one that I'd personally want to own because I've never served in the military, but I thought it was worth mentioning in my Top 8 because it is really neat.

I think these are likely a really smart investment because of the military tie-in which isn't exactly common with Magic products. It's not the flashiest mat in the world but it is very cool. If I had served in the military and played Magic, I feel like I'd want one of these and imagine other people could feel the same way. Its a unique crossover between two things that mean a lot to people.

With that being said, these are already fairly pricey and I could see them being one of the eventual pinnacle items in the Mat collecting world. I have not seen many of them around and I assume they are fairly uncommon. 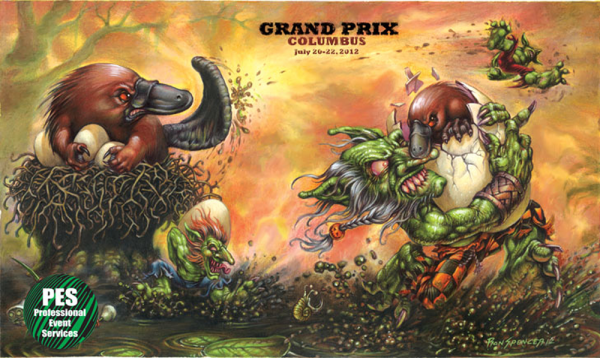 I remember when this mat came out. I couldn't help but think it was easily one of the most absurd images I'd ever seen and it still is.

It's funny. It's cool. It's old. It's hip. It's kind of exactly what one would want out of a collectible image. It is very of the times.

For how iconic and difficult to track down the mat is, I feel like it still holds a fairly affordable price tag. Usually, around $75.00. To be fair, that is on the high side for a playmat but I do think this is one of the most recognizable playmats of all time. There are so many different Grand Prix playmats and people know this one is Columbus even though it was five years ago. It's because the mat has serious cachet. 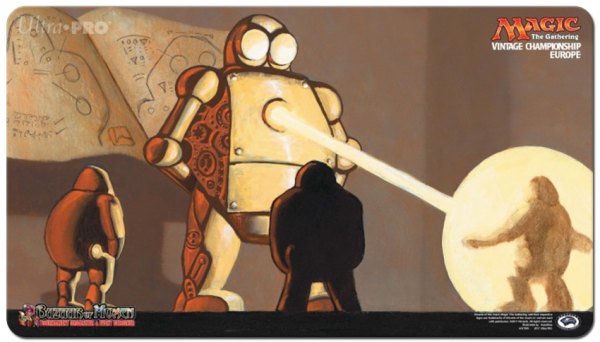 I didn't even realize this mat existed until fairly recently. I wasn't able to go to Europe for the event—so how would I know?

I've always had a soft spot for Metalworker and its bizarre artwork. It's just so strange and bright! It looks really cool blown up to playmat size. I assume these are cheaper overseas than in the States. This is one of the few mats on the list that I don't personally own but I wouldn't mind picking one up at some point.

I used to play the mono-blue Tinker deck in Extended before Mirrodin block got it all banned. In fact, it was the first "netdeck" that I ever played. I got the list out of Inquest Magazine and badly rolled all my friends with it. You could say that Metalworker and I go way back. 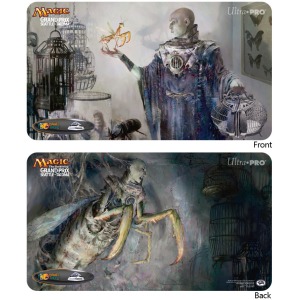 I love this playmat, and not just because I made Top 4 at the event. Humblebrag deployed.

All things considered, this is an amazing playmat. There are other double-sided flip mats, but why would you want one that wasn't the greatest flip card of all time?

Not to mention, it is a Legacy card on a mat for a Legacy Grand Prix. It's basically a Legacy Player's dream. I have one that says Top 8 on it, and it is one of my favorite Magic-related items I own. 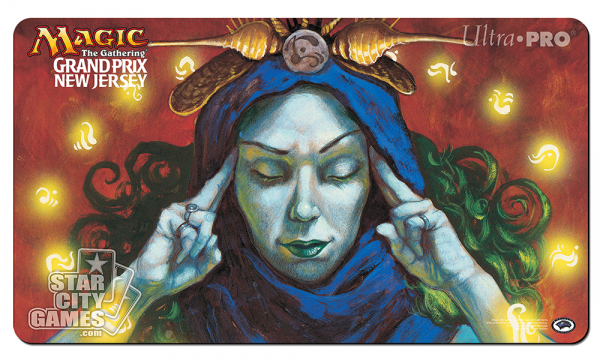 Okay, okay. If you wanted the "most Legacy" mat ever it has to be Brainstorm. I mean, Brainstorm is kinda the card that makes Legacy, Legacy. 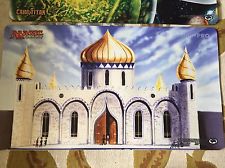 In my opinion, this is the coolest-looking playmat that I've ever seen in my entire life. It is absolutely gorgeous. I use it as my mouse pad when I play MTGO and do content. I couldn't think of anything I'd rather look at for twenty hours a week!

Library of Alexandria is one of my favorite cards. I used to wreck people with it back in the 90s when I was a scrub. I saved my allowance and purchased this card because I knew it was the blade.

In fact, I quit Magic in high school. I was playing hockey and playing in bands and didn't have time for Magic. My freshman year at college I was taking a World History course and the professor started talking about the Library of Alexandria and I just couldn't help myself. I hit up a game store for the first time in four years and got hooked all over again.

It's not an easy mat to get because it was a VIP purchase but it is well worth tracking down. It's one of the coolest ones. Mark Poole also did an alternate art Library of Alexandria mat which is also neat. I prefer the old art mat. It has the perfect mix of vibrant flash and nostalgia to capture my imagination.

Like I said in the introduction, I'm not really an expert on playmats. I'm just a guy who loves the Magic cards. With that in mind, these are my favorite mats of all time and products that I think are potentially worth making an investment in. If you consider yourself to be a playmat expert—please by all means drop suggestions into the comment section. I'm always looking for the inside track, as are the other readers. So, I welcome that kind of input to the discussion. I'd love to hear about which mats are your favorites and hopefully mine come across as credible!

I just like what I like and when it comes to something as personal as playmats it's hard to go wrong if you enjoy it!