The last times we talked about Standard rotation (here and here), I went through some predictions of things I predicted would happen along with the rotation. Let's revisit some of these highlights to see what we can learn.

Among all the cards that rotated two months back, the Eldrazi are the obvious choices if you are investing your tickets in Modern speculations. Lets look at a few cards here: Eldrazi Displacer, Matter Reshaper and Thought-Knot Seer.

These are the most popular Eldrazi in Modern at the moment. Among the three, only Matter Reshaper remains at below 1 ticket, while the other two remain quite valuable even after rotation. Here's where the cards were a few months ago:

The price of Eldrazi Displacer went up between 1 and 2 tickets in September, pretty much in tandem with the Standard rotation. The price didn't go very low when players were getting rid of their copies because the card still had some demand in Modern or older formats. Soon after  rotation, the price of the card started to rise slowly as players started buying them for Eldrazi Taxes in Modern.

Compared to Displacer, the value of Matter Reshaper did not go as well. Displacer is played in more than one deck across multiple formats, while Reshaper is currently only being played in Eldrazi Tron. However, this doesn't mean Reshaper does not have potential to be a long-term gainer – overall, it's still a very annoying threat in Modern. When colorless Tron variations becomes the deck to beat again, that is when Matter Reshaper will earn us some profit.

Thought-Knot Seer went up to near 13 tickets at a point right before rotation. The reason behind this spike is probably that some Standard decks back then, like Mardu Vehicles and Mono White, somehow broke the format by playing this card instead of other usual components. This means that a Standard card can still go up in price two weeks before rotation due to its performance in premier events. It's rare that a card that is rotating can increase in price one to two weeks before rotation, but if by coincidence we had bought them as long-term speculations, this surprising Standard spike would have helped us earn some profit on a short-term basis.

We shall look at the two best planeswalkers that rotated recently: Liliana, the Last Hope and Nahiri, the Harbinger. Liliana, the Last Hope is played in not only Modern but Legacy. I'm not very familiar with formats other than Standard and Modern, but if a card is played in older formats than these two, it generally indicates that the card is extremely powerful. As for Nahiri, she's not as popular, but remains stable between 5 and 7 tickets.

Let's look at the prices and some of my comments from previous discussions: 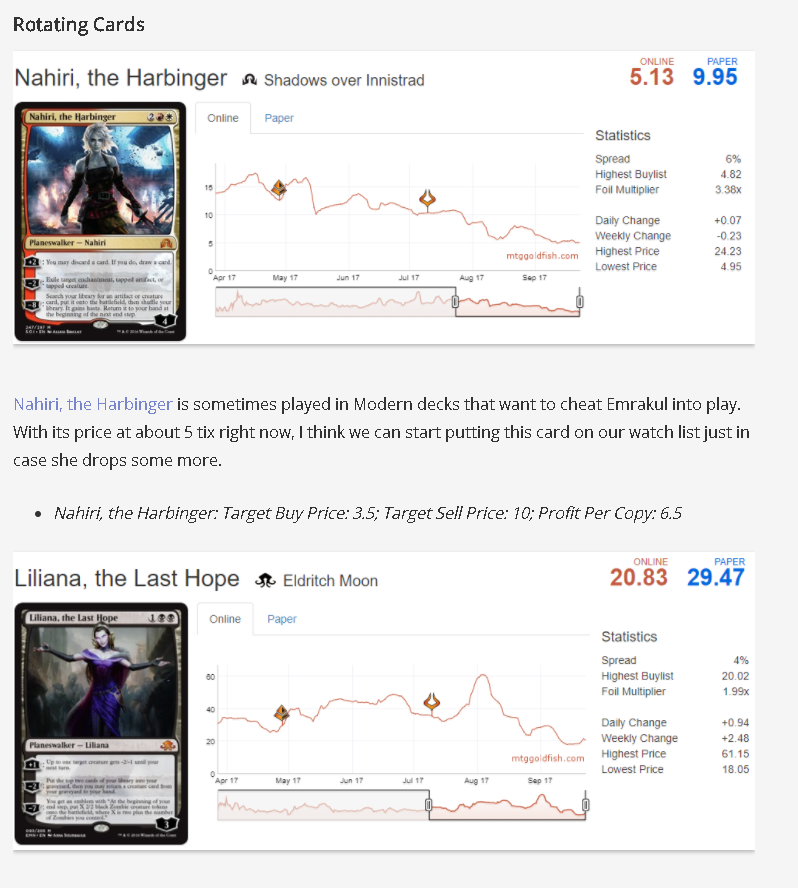 Many people would regret not buying Liliana, the Last Hope at that time once they see what's happened to her price now. This pick was pretty straightforward: as a planeswalker at 3 mana, with abilities that can generate card advantage, this is higher-than-average power level. You guys probably know what happened to Liliana of the Veil's price. Although the Last Hope is not as powerful as Liliana of the Veil, the card has a very high potential to grow further in value. If you ask me, it is safe to invest in Liliana, the Last Hope at her current price. In my opinion, below 35 tickets is still fine, but you probably should spend those tickets on other picks that have a higher chance to earn larger profits.

As for Nahiri, so far the Modern metagame has no room for her to shine, as most decks in the format like Five-Color Humans, Affinity, Burn, and Storm are just too fast. Previously, I suggested buying copies when the price dropped to 3.5 tickets each – and I still think the same right now.

Planeswalkers are comparatively easy for speculation because they usually show their Eternal value while they're still kicking around in Standard. Yet, we can still count on people selling their copies en masse prior to rotation.. Most walkers that falls in this category are below four man, with other good examples besides Liliana and Nahiri behing Jace, Vryn's Prodigy // Jace, Telepath Unbound and Chandra, Torch of Defiance.

Lets look at some other creatures that I've mentioned previously to see how they performed lately.

Kalitas, Traitor of Ghet was about 8 tickets when I discussed the card, and I suggested buying copies when they fell to 4 tickets each. We can see from the graph that the price fell to about 5 tickets in September and has maintained that price since. After observing the graph for about two months, I think this card is not likely to go up in price at any point soon. The format is very fast and decks that would lose to this card (like Melira/Anafenza combo and Dredge) are no longer the deck to beat anymore. If you are holding bunch of Kalitas, its time to decide whether you want to keep them for the long run or to free up the tickets for other specs.

Spell Queller reached its absolute bottom in terms of price in early September. If you played along with this speculation, you should have cashed them out when the Modern Jeskai Tempo deck suddenly became very good online. Good creatures have a higher chance overall to increase in price, because almost all decks need creatures as finishers. Thus, for future rotations, I intend to aim for quality creatures I expect to be widely played after rotation.

Other Rotated Cards to Watch Out

This card was one of the most broken cards when Collected Company was legal. Now its played in similar strategy – Five-Color Humans in Modern. I'm pointing this card out because I think it will see a cyclical pattern in its price graph. Anything that is good occasionally/seasonally will have a similar trend like this one.

Tireless Tracker was a powerhouse in Standard and has seen play in certain brews in Modern. If I'm not mistaken, Todd Stevens had a few copies of Tracker in his "Value Town" deck that won some big tournament recently. I suggest you guys keep this card on your watch list just in case a good buying opportunity comes about.

2 thoughts on “Insider: A Deeper Look at the Recent Rotation”