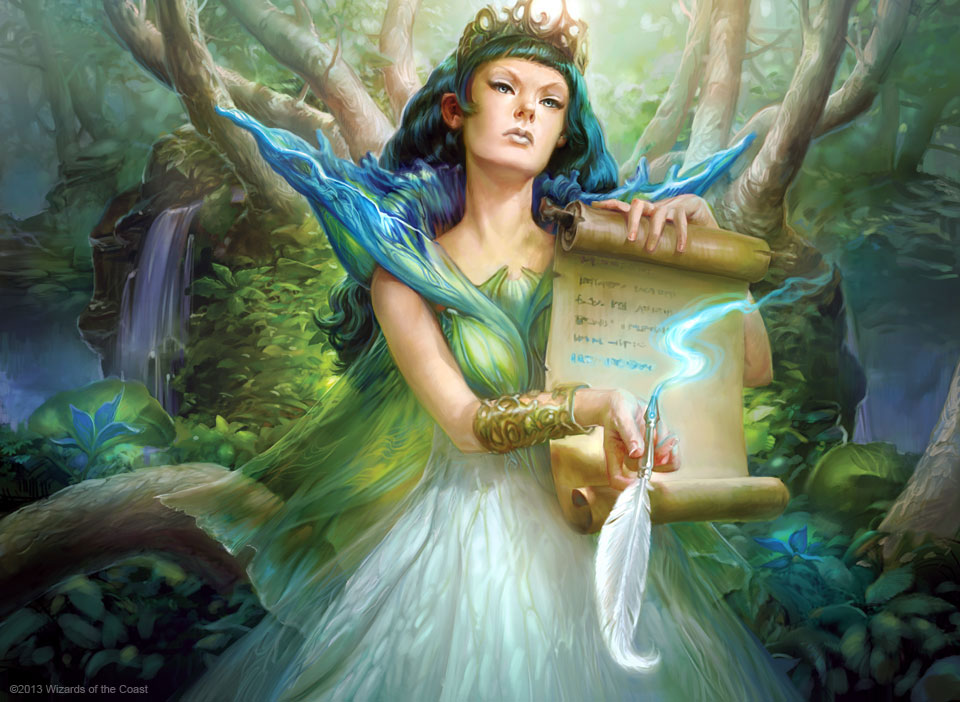 Another week gone by, another round of Alpha cards spiking. I won’t drone on about this topic again, but I will at least share the recent Interests page for last week to underscore my points made in previous articles. While much of Magic finance stagnates through the holidays, this is one sector that remains very robust.

In all honesty this is a fairly muted time. People are saving money or selling cards to raise cash for the holidays. In general this is a great time to be buying cards rather than selling.

That said, there are a few pockets of strength I want to touch on this week—no, they’re not all the Reserved List cards. While I certainly have a preference for those cards, they’re not the only ones I have my eye on. Though, they are all older cards. That’s my area of focus these days, after all!

When I started playing back in 1997, my friends and I referred to all multi-colored creatures as “legends.” I’m not sure if that was a broadly accepted term or just a misnomer that we applied within our playgroup, but the term sticks with me even today. Perhaps now they merit the term “legend” simply due to their legendary price movement.

I’m not just referring to Reserved List cards here; those already jumped as part of the Reserved List buyout craze back in August and September. Now we’re seeing non-Reserved List cards—cards that have been reprinted already—jump in price. Most recently we saw the spike in Nicol Bolas (you can see it towards the top of the Interests list above). Before that we saw a huge spike in Legends Nebuchadnezzar. 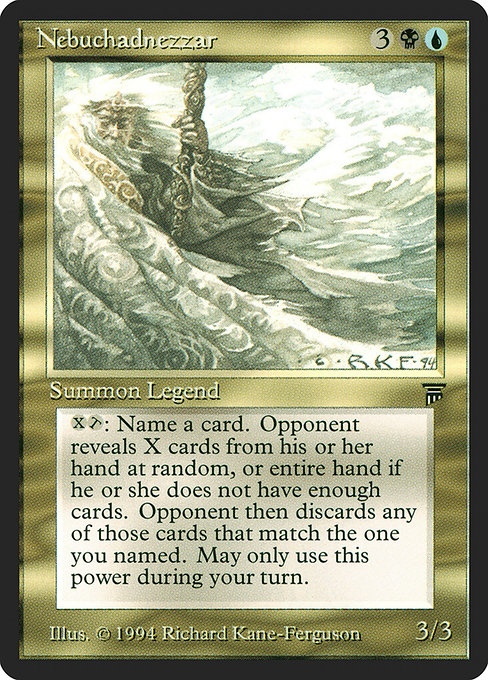 Both of these cards were reprinted in Chronicles. Nicol Bolas was even reprinted with a black border in Time Spiral. Yet here we are staring at higher prices for the original printings.

What’s next? Well, I can see the other Elder Dragon Legends jumping over the next few months. Card Kingdom already has an aggressive buy price on them. And while they won’t get anywhere near Nicol Bolas’s price tag, they will almost certainly trade higher six months from now. Chromium and Arcades Sabboth are my favorites but this is probably a matter of personal preference.

Any other rare, legendary creature from Legends also has potential to pop. We can use TCGplayer to identify those with the highest urgency based on supply. One card I made sure to get my copy of recently is Johan. This is an unassuming legendary creature with fairly minimal utility, yet with only 25 sellers on TCGplayer there is a potential for a price increase once the remaining cheaper copies sell. 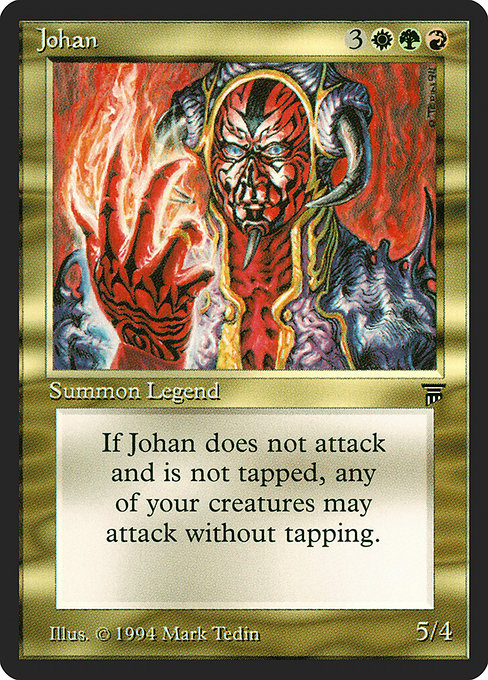 Other Legends legends have a bit more stock, but that doesn’t make them less interesting. It just means their time horizon is longer. I recommend keeping an eye on Dakkon Blackblade, Xira Arien, and Rubinia Soulsinger but there is no need to buy copies immediately.

Other Cards to Watch

Beyond those cards mentioned above, there are a handful of other cards I’ve noticed with fairly low stock—this despite the fact that they’ve been reprinted!

Have you noticed the price movement on Presence of the Master lately? I didn’t even know this card had already been reprinted! But the original artwork with a person who looks remarkably like Albert Einstein makes the Legends printing far more collectible. I made sure to grab a set of this one and supply is dwindling quickly. Will this card stick over $20? Probably not. But a move from $2 to $8 is certainly in the cards here. 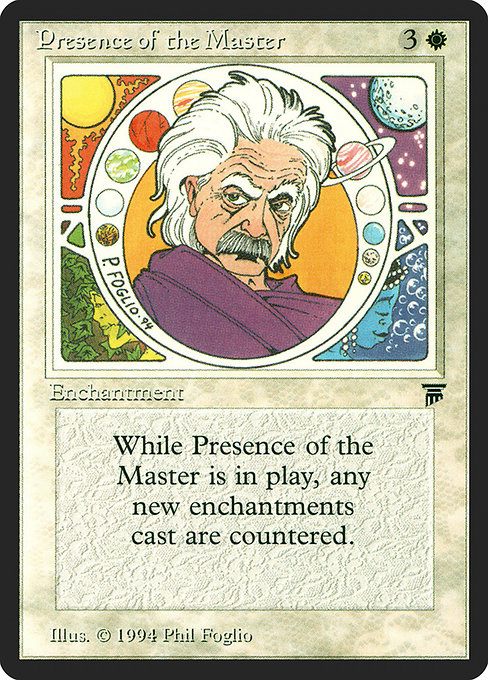 Copies of Revelation are also nearly sold out on TCGplayer. There are a few HP copies at low prices, but a nicer-condition copy will cost you $7. Considering that Card Kingdom has been paying north of $5 per copy for a while now, the higher price tag seems merited. But if you haven’t been tracking this one closely, it could have easily escaped your radar. Concordant Crossroads has gotten even crazier in price—even Chronicles copies have hit double digits on buylists! 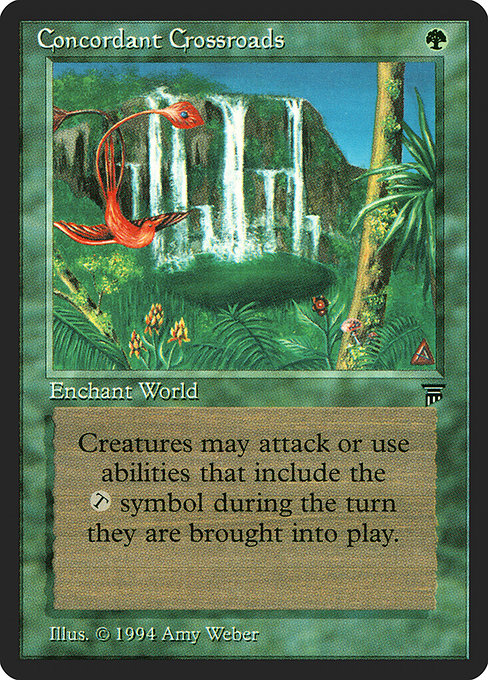 Shifting away from Legends cards, I’ve noticed some other reprinted cards have been selling well lately. Titania's Song from Antiquities has gotten relatively low in stock lately considering it was only an uncommon in the set. I even saw Card Kingdom’s buy price pierce a buck at one point. This one is definitely worth digging for if you have some bulk lying around.

A card that shows up on Interests now and again is Stone-Throwing Devils. I don’t think you’ll see a reprint of this card any time soon, but technically it’s not on the Reserved List. There are still plenty for sale on TCGplayer, but nicer copies are getting a little costlier.

Ivory Tower has been reprinted a ton, but that doesn’t stop the original Antiquities printing from being worth a few bucks. This one was played a lot back in the day, so it’s no surprise that heavily played copies are still cheap. But a Near Mint copy will cost ya…if you can find any. There are currently none on TCGplayer; lightly played copies are in thin supply as well.

In a similar camp is Colossus of Sardia, which has moved up in price lately. 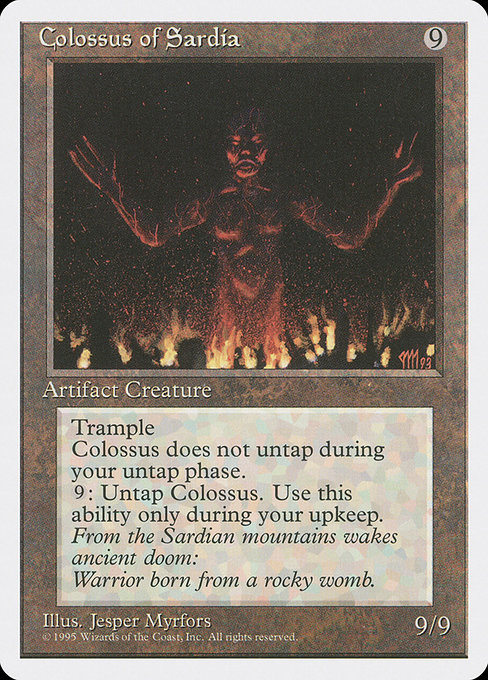 This is yet another card with no near mint copies in stock and a dwindling supply of lightly played copies remaining. There are still some heavily played and moderately played copies available, but with just 34 sellers listed there really aren’t an excess of copies for sale. This, despite the multiple reprints!

What About the Reprinted Versions?

In nearly all cases, the price movement we’re seeing is related to either collectors’ demand or Old School playability. Therefore, in general I’d recommend against buying any of the reprinted versions of these cards. If you’re looking for budget old school, I wouldn’t hold anything against you for purchasing a Chronicles printing of a card. Even Timeshifted cards are acceptable in most play circles. But don’t expect much return on these newer printings.

That said, I wanted to name a couple of exceptions. These aren’t going to make you the same kind of profits that original printings have yielded over the past couple months. That said, a few reprints are not worthless and this is worth mentioning. But be careful: in many cases the newer printings of these cards are vulnerable to additional reprints!

I’ve already talked about Chronicles Concordant Crossroads. But that’s not the only Chronicles card worth looking at. City of Brass from Chronicles has been fairly volatile lately. I picked up a few copies when stock on TCGplayer got near zero, expecting a spike that never happened. I ended up buylisting my copies to ABU Games for some trade credit, but these may not be that horrendous of a long-term hold. Now that the original Arabian Nights printing is a fortune and a half, Old School players may be more inclined to reach for the budget-friendly Chronicles printing. 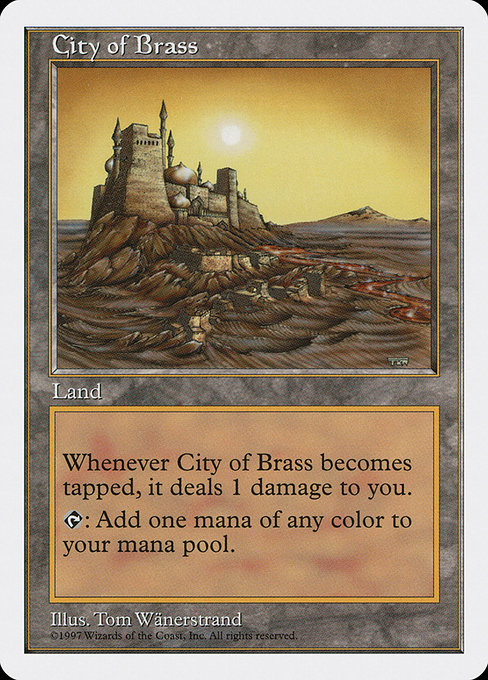 The same can be said for Chronicles Hell's Caretaker, which has risen above bulk status. The original Legends printing isn’t nearly as expensive, however, so it may take time for this spec to simmer. And while there are a lot of copies still in stock, it’s tough to find a single vendor with many copies for easy speculation.

But the most exciting reprint of all is certainly Nicol Bolas. In step with the jump in the Legends printing, we’ve also seen a similar percentage jump in Chronicles copies. The move from $1.50 to $2.50 is certainly unexciting, but the graph on this card has gone parabolic most recently. Copies are dwindling, and this may actually be a decent pickup despite the white border.

Reserved List speculation isn’t dead. Many cards from this elite group are getting targeted over and over again. But things have finally settled down a bit, giving opportunity to reexamine the market and identify targets to watch. This is especially true as we enter the holiday season, when Magic cards tend to soften in price.

Not all cards are seeing softened demand, however, and that includes cards that aren’t on the Reserved List. In fact some hot targets right now have already been reprinted! Many of the “Legends legends” have been targeted lately despite their Chronicles reprints. Other collectible or Old School-playable cards are also on the move. Hopefully some of the cards I mentioned were a surprise to you, and gave you some ideas to ponder.

With all of this said, don’t lose sight of the real bull market: Alpha and Beta cards. These have seen some explosive growth recently as copies disappear from TCGplayer. While these original cards won’t have the same liquidity as a normal spec, there’s plenty of upside remaining. It’s fine to diversify, just don’t forget about Magic’s first set.