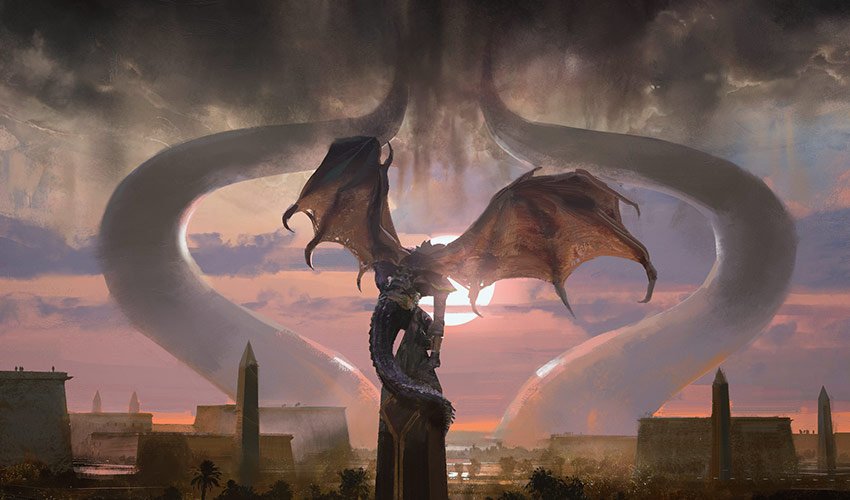 Today, I would like to explore a very specific hypothetical situation. It's one that many players have likely discussed at some point in time, and may not be pleasant or comfortable to talk about as a Magic player. This, quite frankly, is the doomsday scenario.

What would happen if Wizards of the Coast stopped making Magic cards tomorrow?

Imagine walking into your LGS to pre-order a box of Rivals of Ixalan, and the guy behind the counter says to you: “I hope you enjoy it, because it’s the final set that will be released.” Yes, Wizards of the Coast has many sets planned right now. Iconic Masters, the return to Dominaria, the return of the Core Set, and many more are slated for the next year. Take a moment and suspend disbelief. Let’s say, for the sake of argument, that Hasbro, Inc. went bankrupt and its subsidiary Wizards of the Coast was forced to close its doors as well.

This is a huge scenario to tackle, so let’s break it down into pieces and figure it out—because one day (likely not tomorrow, don’t worry), you might have to be prepared.

Every card has a price assigned to it, whether it’s 10-cent bulk or an insanely high-priced rarity like the full-art Mutavault Champs Promo. Magic players have been riding an enormous bubble in the last few years, as cards played in eternal formats have seen outrageous spikes. Chalice of the Void was a $90 card. Noble Hierarch—a great mana dork but still just a mana dork—was at $60 for months despite having three printings. As I write this, it is still around $50 even with the RPTQ promo having been announced.

The decline in price of a Magic card is something that no player wants to experience when cards are in their collection. However, heavy price changes would likely happen in one massive fell swoop if Magic product stopped being printed. After the initial drop in price, most cards would hold their value until the end of time, and possibly become collector’s items if nothing else.

Individual people have a very hard time letting go of their collectible items for less than the original market value or sticker price, believing their personal possessions to be worth a set amount. Would you get rid of all of your cards in a hurry (and probably for less money) if the printing of all future products ceased? Personally, I would not, because there is always a secondary collectibles market for popular products, and the longer they have been around, the larger the collectibles market becomes.

The sports card industry is a good parallel example of a collectibles market. Without future product, Magic would become very similar to this industry. Their product cannot be used in competitive tournaments, yet it exists within a collectibles market. While that market did experience a decline in the 1990s and 2000s due to an oversaturation of the market, it has seen a resurgence in the past decade. There were many sports cards companies producing product, and despite the disarray of their market for two decades, their vintage products still have a high (and every year increasingly higher) price tag.

With Magic, it's even possible that another company would step in and begin to design new cards. But that would take a concentrated effort over the course of a few years, and probably some major legal battles. This means that even if another company took over Magic, the market would have plenty of time to settle into its own rhythm with no company presiding over the product itself.

That brings us to the next question: what happens to tournament Magic? Reasonably speaking, the Pro Tour would cease to exist. There would be no financial backing for a Pro Tour if Wizards of the Coast did not provide it. However, I theorize that tournament Magic would stick around as a format-specific store-to-store grassroots effort.

If something ever happened to Wizards of the Coast as an entity, and cards stopped being printed, the local game stores would feel the heaviest effects first. There’s no way to mince words—stores would suffer great losses, and would need to have additional sources of revenue to survive.

There are many stores that rely heavily on Magic as their number-one cash cow. There are always secondary streams of revenue in other card games, whether they are Yu-Gi-Oh!, Pokemon, Cardfight: Vanguard or Weiss Schwarz, or other up-and-coming card games like the Final Fantasy Trading Card Game. But any LGS that relies on Magic will almost certainly lose one of its best money makers. Many stores would go out of business, but some would continue to survive off of the unregulated stock market of Magic cards.

To keep focus on the card game, there would be different efforts all over the world to continue drawing interest. Friday Night Magic would still be considered a hot point for any tournament scene that stuck around. Depending on the interest level of a given community, this would probably mean the creation of new formats or the resurgence of old ones.

The final Standard format would likely not be the end-all-be-all of Standard formats. Instead, old Standard formats would probably start to come back to some degree. Some of the most popular formats as far as deck diversity were, for example:

These different options, as well as a permanent Modern and Legacy format, would continue to draw interest at any place willing to continue running the events. It would be highly unlikely that the grassroots side of the Magic community wouldn’t persevere. That would fortunately bode well for the prices of Magic cards for at least enough time to salvage some amount of pricing.

How Hard Will My Magic Cards Get Hit?

This is the biggest question of them all. The answer largely depends on the type of Magic that comprises your collection. Standard players would likely get hit the hardest, since Standard is the only truly non-eternal format in the game. If Standard was popular enough at the time that production ceased, then Standard players have hope of seeing their cards retain some value, but recent Standard formats and turnout at many stores paint a negative picture.

The most immune players, I believe, are the Commander players. Commander is comprised of two possible groups: casual players, who play tabletop Magic and care a lot less about the market; and competitive players, who mostly build decks with cards considered collectible items as much as strong cards. If you play casually, your cards have already been obtained and will keep being used, granting sentimental value.

Modern and Legacy are in between. While Modern enjoys widespread popularity, and there are collectible aspects to Legacy, many cards from these formats would likely feel a sharp sting and a drop in price.

For Modern especially, if the tournament scene falls off any more than expected, then many cards that have multiple repeats would immediately tank in price from a marketplace trying to unload. Noble Hierarch, Aether Vial, Chalice of the Void, and Cavern of Souls are all notable examples of cards that have over-inflated prices despite multiple printings, specifically because of their popularity in Modern.

Legacy is slightly different, because the tournament scene can already be difficult to sustain on a weekly basis. This scenario would probably damage the Legacy tournament scene beyond reproach, since many Magic-centric stores would already be getting hit hard.

What do you think about the doomsday scenario? Do you agree? Do you think I’m way off in some aspects? Let us know in the comments below!

5 thoughts on “Insider: Preparing for the Doomsday Scenario”