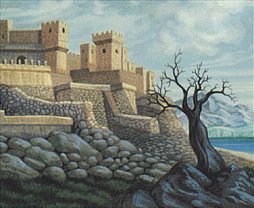 Today's article is aimed heavily towards game store owners, but should also be useful for any binder grinders (if they still exist, as I haven't seen as many at major events anymore).

First I'd like to look at a way of calculating profits from single sales and buylisting, and discuss what it means for your pricing. Next I'll discuss some of the natural advantages an LGS has over online stores, and how you can take advantage of them.

First, let's take a look at the equation for compound interest.

I'm sure you're asking what this has to do with transactions and Magic cards. Well, that equation is very similar to one for inventory growth with regard to trade-ins. An example will illustrate.

Let's say there's a Standard staple retailing for $10, and a hot Commander staple also retailing for $10. In order to trade in for either, players have to trade in $12.50 worth of cards (so we'll say our trade-in rate is 25% above the retail price of the card). Assuming you have a large Standard and Commander playerbase, and that each playerbase has the hot $10 card the other wants (but for some reason always trades into the store), then we fill in for our variables like so:

If we get to make this trade 4 times (thus n = 4), then our inventory value (P) has gone up to $24.40. If we can do this type of swap 8 times then P goes up to $59.60. The buylist pricing of 25% is a pretty aggressive (for most stores that percent is higher)—but the point of this exercise is to highlight that by repeating transactions growth becomes exponential.

For fun consider the following options (as a store owner) and guess which one generates the most future value.

The winner is 20% (by a small margin). Now, I'm sure you might be thinking, "Well, the small margin (around $0.2) isn't worth the extra effort of 66% more transactions per day." However, the point here is that you're more likely to increase the number of transactions by being more aggressive/competitive.

Now why did I write this? The honest reason is that I've seen stores that when they start to struggle financially they raise their prices (which in this instance is similar to raising their trade-in rate) to try to increase their profit margin. They are likely dissuading players from buying from them or trading in because it costs them more to do so. I've seen it happen repeatedly in my own area and I've heard it from numerous players at events.

Many major businesses run on much tighter profit margins than most Magic stores' single sales (granted there are a lot of other factors, but the point is still valid) and those businesses are profitable because they make up for small profit margins through massive quantities of transactions. It's absolutely critical as a store owner to understand that, thanks to internet services like TCGplayer and eBay, you are competing with a slew of other sellers when it comes to singles.

This leads into my next subject. While competition in singles sales is very fierce, there are certain areas your brick-and-mortar store has a natural advantage. 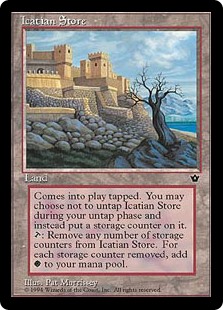 First, I'll state that I don't own a store, nor do I want to at this time. (I've run the numbers, and unless I was wildly successful it wouldn't be worth it to me from a financial perspective.) That being said, I've been watching my favorite LGS start to decline. While I've offered suggestions (and many other players have as well) they've been slow to implement any of them. Friends of mine like to discuss buying out the owner and running it as a group. I admit this is an interesting idea, though I imagine it would require a lot more effort than one or two nights a week.

As I stated earlier, Magic singles are an extremely competitive market. Forgetting that can cost you (as it did one of our local stores). One of the most important things to keep in mind is that a local game store is supposed to be a place for players to come together and enjoy spending their free time gaming. In light of this, there are a few things an LGS can provide that internet stores can't.

Only WPN stores can run sanctioned tournaments, so as long as players want to play in sanctioned tournaments there will always be a need for local game stores. That being said, tournaments are often not the best source of income, especially if there is a cash prize. The typical cost of running something like a PPTQ for 24 players is around $420-$450 (if you get a judge) or closer to $320-$350 without one. However, tournaments can create a strong immediate demand for singles as players need the cards to compete.

Your local playerbase is only so big, and while the Standard format may shift somewhat frequently, eternal formats tend to be a bit slower. That means players are often less likely to purchase large swathes of cards over and over unless they are just getting into a format. With that in mind, it can be very profitable to offer tournaments in lots of different formats. Thus you can expand your sales without requiring a ton of new players (though different formats may bring in some new players as well).

While these are technically tournaments already, drafts offer additional benefits. They keep a steady supply of singles getting added to the local marketplace (and thus smart owners would aggressively target the ones they can't keep in stock). They tend to offer continual cash flow (as most players will have to pay cash to enter a draft). Finally, they boost your sealed product sales, which is important with some distributors (stores that sell a lot of sealed products and thus buy a lot from distributors can get additional benefits not available to stores that don't).

They can also help sell Magic-related products like sleeves and deck boxes. Drafters often come unprepared to open a valuable card, and they'll want to protect it if they do (I can't tell you the number of times I've been in a draft and heard one of the drafters tell the store owner they needed to buy some sleeves).

While players can obviously get snacks from restaurants or grocery stores, the beauty of a game store is that most players will spend a decent amount of time at the store once there, which means you have a semi-captive audience. Snacks can have a very good profit margin and still be cheap thanks to the availability of bulk stores like Costco and Sam's Club. I know my LGS probably makes $10-$15 of profit per night thanks to snacks and drinks. 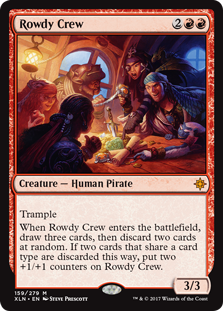 I know my LGS is one of my favorite places to hang out and talk with fellow gamers and like-minded individuals. I have spent hours at my LGS without playing a game before, and I imagine many of you have done the same. Two of the three guys in my wedding party are people I met playing Magic (the other, my best man, is my brother) and I met both of them at game stores.

Now, one challenge for game store owners is definitely dealing with toxic people. On one hand you don't want to alienate a paying customer, but on the other you can't allow that customer to turn away other customers. In this instance it's important to post the rules you expect everyone to follow out in the open and to hold people accountable to them.

I know one local store that doesn't allow swearing and they will call you out on it if you do (which is usually enough for someone to apologize and be more careful). Other stores don't mind as much, but in doing so they may be sacrificing some of the "family" atmosphere they might have had. However, I also know clientele that avoids the "family friendly" places because they don't want that atmosphere, so it's a balancing act.

Stores can also be a "one-stop shop" for all things gaming related. Many of my fellow writers and I advocate for diversification when it comes to speculation—it's just as important to diversify your product offerings to non-Magic items as well.

The most successful game store in my area actually focuses more on board games, and Magic is just an additional source of income. The most recent store to go under did almost exclusively Magic (with a little Dragonball Z, but not a lot). Standard is typically one of the big cash cows for stores, thanks to the constantly shifting metagame and the expiration date of its cards. If the format ends up boring and players grow tired of it, a Magic-only store can easily find itself with dwindling customers.

In the end the purpose of this article was to help stores, especially those who might be struggling financially, with some advice. The first part was mainly to show that increasing your profit margin per transaction may not necessarily be the best path to profitability. The second was aimed to remind stores what they actually do have a monopoly on (as opposed to the singles market, which is arguably over-saturated).