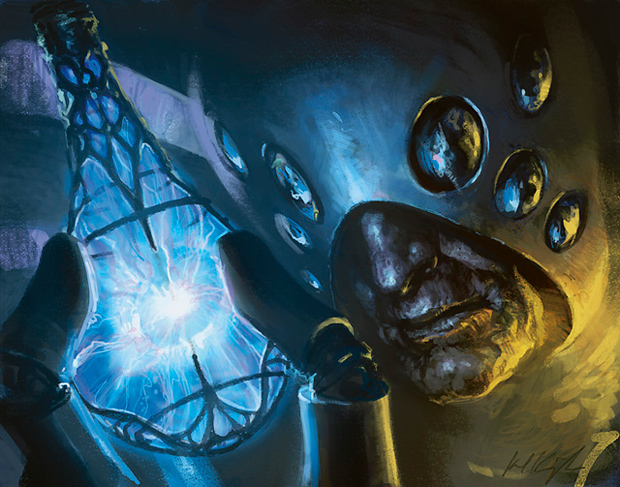 Today I'd like to consider a question that has impacted the way I think about Magic finance in a pretty dramatic way. Does becoming a Modern staple doom a card as an investment?

Typically, the assumption has always been that "good cards go up." It makes sense, because these are the cards with the highest demand from the largest percentage of the playerbase.

Demand does drive prices. It has always been a safe strategy to invest in cards that have cemented themselves as format staples in the non-rotating formats like Legacy or Modern.

On the one hand, I'm a big fan of the Masters products because they enable more players to afford to compete. On the other hand, on a personal level I hate these sets because they completely waylay the value of my Magic collection. As a tournament player, I own all of these staples and have watched them dramatically diminish in value over the past few years.

It turns out owning the good cards has become the worst thing to do! Up is down. Black is white. Right is wrong. If a card is really, really good—it will be reprinted until it becomes affordable again. One simply cannot invest in these cards because they will always trend down.

I bring this up for a reason—not just to complain about it. For investing purposes, it makes a lot of sense not to invest in Tier 1 staples. This is awkward because the Tier 1 staples are the kind of cards you want to own because they actually go into competitive decks!

The actual cards to own are the ones that don't go into competitive decks since there is a much lower incentive for Wizards of the Coast to reprint them. Obviously, the "go-to" for air-tight speculating is the Reserved List since those cards are untouchable when it comes to reprints. Look at The Tabernacle at Pendrell Vale:

The card has gone absolutely ballistic the past few months. It's now worth more than most Power 9! It's a stupid land that goes into a Legacy deck. The same with Drop of Honey.

Obviously, a lot of the value of these cards is derived from the Reserved List clause. However, I also think there is an element of people wanting to invest in tournament staples going on here as well. Think about it. You can't invest in non-Reserved List staples because they are just going to be inevitably reprinted in some Rogue One Masters sets and the price will tank.

However, these Reserved List staple cards don't suffer from that unfortunate side effect. Thus they're really spicy speculation targets because they double-qualify: tournament staple that's immune from reprint. I think the fact that Modern tournament staples have become such useless and failing investments has really helped the surge on these cards.

I'd also like to point out another potential problem with the current market place. If some aspect of my thinking is true and staples are rapidly becoming an across-the-board losing cause, what does that mean for the marketplace? If we are to assume that once a card becomes a format staple it will be reprinted into oblivion to make it affordable (and to sell Clone Wars Masters packs), why would anybody want to own these cards if they don't need them for a tournament?

What is the point of owning staples (outside of playing with them in a tournament) if the price is always going to trend down? I suppose playing with them is a good reason to own cards. The fact that I play with my cards all the time is the only reason that I didn't sell the vast majority of my Modern collection.

From a play perspective I think the reprints have helped Modern grow as a format. Modern is the best format that Magic has ever had. It is fun. It is dynamic. Basically, everyone and anyone can realistically and affordable buy in and play which is awesome. In contrast, Legacy and Vintage are rapidly becoming left in the dust. Tournament staples that routinely cost hundreds and even thousands of dollars? Be serious. These are only for a niche group of people.

It's unfortunate because I think eternal formats are interesting and skill-intensive, but they are not something that most people are going to play moving forward. Why would they? Modern is actually just a better format. It is more dynamic. It is more affordable. It actually changes and evolves at a non-glacial pace. It has dozens of interesting and dynamic options. Ten flavors of Brainstorm is not ten different flavors.

The point of today's article is that I'm pretty much off ever investing in Modern format staples. I assume that if a card is good and worth some cash that it will be reprinted until it is worth substantially less cash. Therefore, it is not a good investment. It makes investing into a weird game of trying to predict which bad cards are just good enough to have a level of demand just below the need for a reprinting.

On the other hand, the reprints have helped to create the most playable and diverse format that Magic has ever seen. Magic has never been more playable than Modern. Both from an affordability and actual game play experience standpoint.

All I know is that it has made speculating in Magic very strange. Options include:

I love that playing Modern isn't playing Standard. I hate that I have a collection of Magic cards I love that will likely end up being worth a fraction of what it once was. Is it worth it to hold onto them?