Below are the total set prices for all redeemable sets on MTGO. All prices are current as of December 19, 2017. The TCGplayer low and TCGplayer mid prices are the sum of each set's individual card prices on TCGplayer, either the low price or the mid price respectively.

Digital prices continue to fall for all Standard sets this week, although it's a more mixed bag in paper. Flagship cards of the format like The Scarab God and Chandra, Torch of Defiance are bouncing a couple of tix after falling from over 30 tix. Players who were looking to add these into their collections in order to play with them over the holidays are getting a good price.

For speculators, Standard still looks to be a low-churn format, where the metagame is very static, which leads to more rigid card valuations. From a macro perspective this is not a great sand box to play in. With Vintage Cube coming online this week and the Modern Pro Tour event looming large, Standard is simply not a format where I want to be speculating at the moment. Ultimately, low enough prices on Standard staples will encourage me to begin speculating, but I don't think we are quite there yet. Preview cards from Rivals of Ixalan (RIX) also have the potential to shake up card valuations so this will be something to pay attention to over the coming weeks.

The Human tribe is suffering in the metagame as both Cavern of Souls and Noble Hierach have been coming down in price. Both of these cards can fit into multiple archetypes, so don't look for their prices to continue slumping. Unlike Standard, Modern is a very broad format that sees many different archetypes cycling in and out of the winners brackets. If you have speculative positions in Modern staples that have been disappointing in terms of return, it's almost inevitable that the format will shift towards your cards at some point in the near future. Nevertheless, the selling window is open now and speculators should be monitoring the market closely over the coming weeks before the best selling window closes in advance of Pro Tour Rivals of Ixalan.

Since the release of Battle for Zendikar (BFZ), I have been employing the foil mythic rare strategy as a part of the portfolio. I wrote about the strategy in an in-depth three part series that you can read up on here, here and here. After having success with BFZ and Oath of the Gatewatch (OGW), the strategy didn't work for Shadows Over Innistrad (SOI), Eldritch Moon (EMN) and Kaladesh (KLD) due to the nature of the prereleases for those sets. Entering Sealed Deck prerelease events gave you a foil rare or mythic rare as a bonus to your card pool, and this distorted the relative scarcity of foil mythic rares so that uncommons actually turned out to be where the value accrued.

Starting with the release of Aether Revolt (AER) prereleases were officially done away with and the foil mythic rare strategy was back on. For AER, Amonkhet (AKH) and Hour of Devastation (HOU), returns on the foil mythic rare strategy were a net 12 percent, 13 percent and 31 percent. Of course I have continued the strategy with Ixalan (XLN) and so far things are looking good. This time around, though, I avoided buying Carnage Tyrant due to a hunch that it would not be the chase mythic rare of the set. This hunch has turned out to be correct, but I wondered if if there was a way to further optimize the strategy. I love this strategy because is has a strong economic advantage that rewards patience, but there's always room for improvement and further development.

Back testing speculative strategies is one way to gain insight into what has worked and might work again. The way I went about doing was to compile a few data points from GoatBots price charts. They are the most competitive bot on redeemable foil sets since they are trying to always have these in stock. This means that the spread between their buy and sell prices is quite competitive on foil mythic rares at about 10 percent. GoatBots is the bot where I do most of my buying and selling of foil mythic rares.

After I compiled the release weekend prices and the current prices my next question was when the lowest price occurred for each card. There were a few cards that bottomed in early October, but most cards saw their lowest price about a month after release, at the end of October and into early November. This coincides neatly with the start of redemption which could explain the timing of the price bottom here. Below is the collected data. 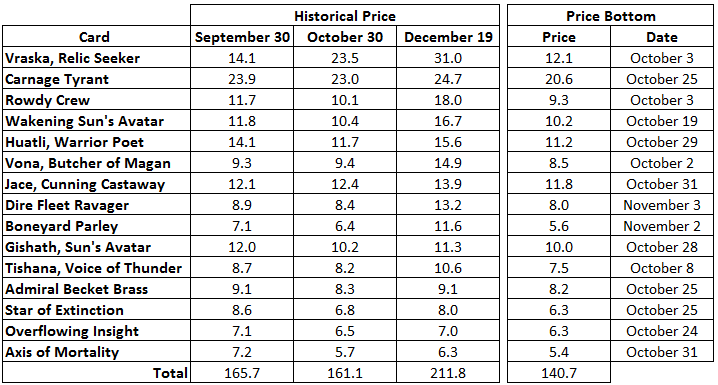 In looking at the table, Vraska, Relic Seeker stands out as the big winner, more than doubling its price since the end of September. 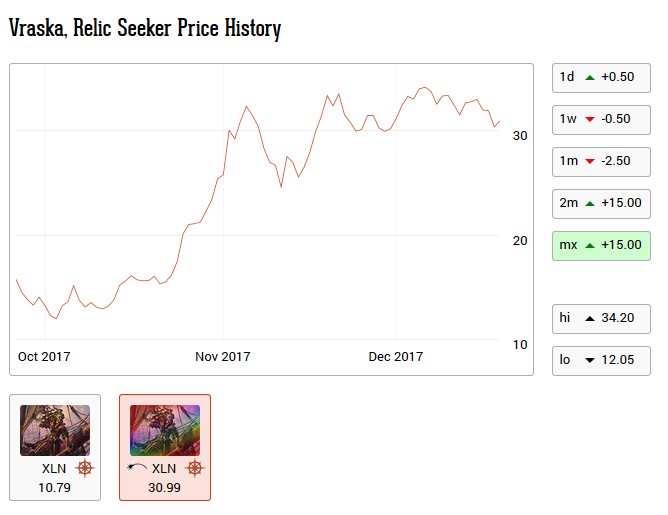 The next tier of cards making gains includes Boneyard Parley, Vona, Butcher of Magan, Rowdy Crew, Wakening Sun's Avatar and Direfleet Ravager. These cards increased in price between 40 and 65 percent since their release. 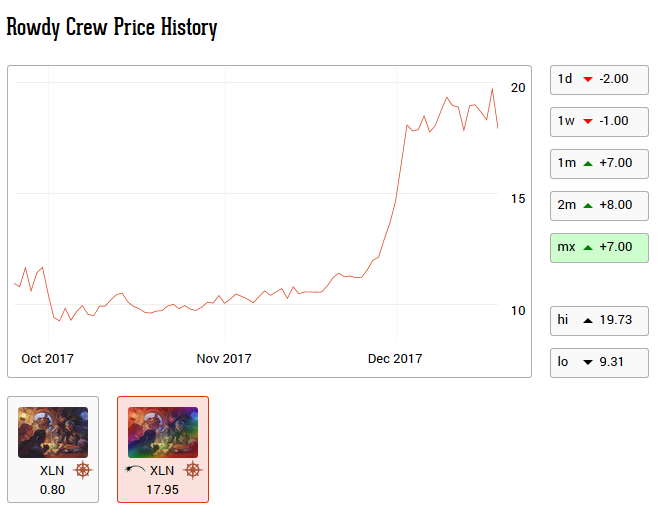 Huatli, Warrior Poet, Jace, Cunning Castaway and Tishana, Voice of Thunder saw gains in the 10 to 20 percent range, while the rest were flat to negative. Interestingly enough all cards see higher prices when comparing prices between October 30 with December 19. 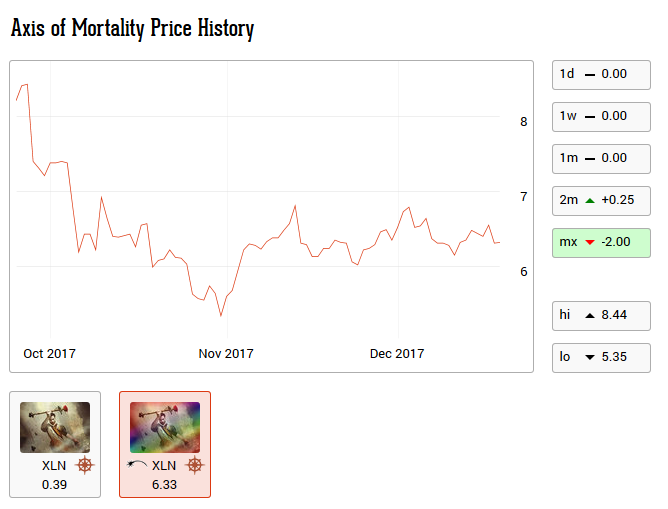 With the data in hand the next step is to specify the strategies that I want to back test, and then compare the results between those strategies for XLN. Here's what I had in mind with their net return calculated after accounting for a flat 10 percent hair cut on transactions, in other words the typical buy/sell spread on the December 19 sell prices.

The first strategy is exactly how I described it when I formulated the original foil mythic rare strategy. Just buy them all and don't worry about what happens to the price of individual cards. This is the approach that players can take to make sure they have all the mythic rares to play with and not lose value. A 15-percent return for XLN is nothing to sneeze at and this in line with past sets.

The second strategy is what I employed this time around, and avoiding Carnage Tyrant improves on strategy one, though just marginally. There could be something to just avoiding the most expensive mythic rare, but I don't think it's going to work every time. Sometimes you'll get a set like AER where the most expensive card gets even more expensive like Heart of Kiran did when it went from 15 tix on release weekend to 30 tix a few months later.

The third strategy is to wait a month and it doesn't really affect overall returns. Essentially you miss out on the big gains, but you also avoid the cards that lose value. Speculators might like to know though that they don't have to jump in, buying foil mythic rares on release weekend. As always, opportunity cost is an important consideration.

The fourth and fifth strategies involve buying baskets of the cheapest mythic rares. Buying the five cheapest generates similar returns to other the other strategies, but buying the ten cheapest gives a noticeable bump up into a 24 percent return.

The last strategy, perfect foresight, is obviously impossible but it gives us something to shoot for on the high end.

The takeaways from all of this is that original foil mythic rare strategy (i.e., the first strategy) is intact and still suitable for players with expected positive returns over time. Speculators could improve on their results by trying variations on the strategy although more testing is needed to give a definitive answer. I will definitely be pursuing this strategy in January with RIX and buying at least a playset of each foil mythic rare.

There are some puzzles left for us to think over, though. For example, what makes a card like Boneyard Parley almost double in price while Axis of Mortality and Overflowing Insight moves very little? It's possible there is no solution to this puzzle, but if there is, it could generate further refinement of the strategy and its variations in the future.

For a complete look at my recent trades, please check out the portfolio. This week I took to selling down some of my SOI and EMN sets. The first eight sets of SOI have been barely profitable while EMN is proving to be nicely profitable. I think the selling window for these sets is open now, although waiting for a few more weeks might bump up SOI into more profitable territory. Keep in mind that the redemption cutoff date for these two sets is in the spring and they could go out of stock in advance so there is a time risk involved in holding these sets.