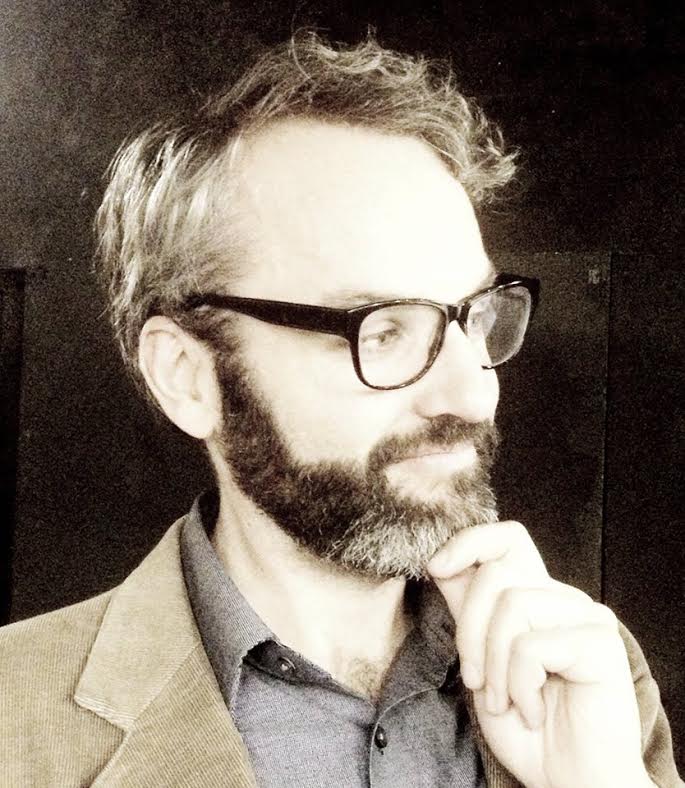 When I got started with speculating on MTGO, it was thanks to Sebastian Park (aka Runeliger) and the late Erik Friborg (aka Hamtastic) on their Freed From the Real podcast over at puremtgo.com that I clued into some of the cyclical pricing patterns of the MTGO economy. They didn't provide a deep explanation of the patterns, just a 'time to buy/sell this type of card', so this left me with a nagging question. Where did these patterns come from?

There's nothing better than learning by doing, so I dove in, and followed their advice to pick up cards from Shards of Alara block after they had rotated out of Standard. I bought twenty copies of Thornling. I liked the card, and to me it seemed too cheap! Months later I turned a modest profit, but I still didn't understand what had happened to make this card rise in price.

Over the course of that winter I joined Quiet Speculation and I started to think more and more about the MTGO economy and why my purchase of a random Conflux mythic rare had turned into a somewhat larger amount of tix. With the QS forums, I had come to a place where I could discuss and develop my ideas, and it wasn't long before I proposed a very specific speculative strategy in the forums. You can read it here, but the backbone of the strategy was the theory of redemption. The journey from buying (and profiting) on Thornling had led directly to me recommending people buy a junk mythic rare from Scars of Mirrodin, Quicksilver Gargantuan.

That series of events would wind up inspiring me to share what I had learned and I started writing for QS. One of my early articles laid out exactly why redemption is so important to the MTGO economy.

Recently I've been turning my attention to another puzzling pattern. Once again, the process started out with me making a somewhat blind purchase. I had no theory and no good explanation for what I was doing; I just had a hunch that the Khans of Tarkir foil mythic rares were good value. I detailed exactly what I was doing in the forums, and the feedback from that exercise helped me to further refine the theory of redemption, this time applied to foils. As usual I owe a thanks to the forum users, but a special thanks goes to forum member Casey Stewart of The Card Nexus for his sharp analysis and on-point comments on this matter.

That particular strategy of buying KTK foil mythic rares ended up working out very well, and much quicker than I had imagined it would. But the success of the strategy just forced me into asking more questions and to thinking about why it had worked. It turns out I am not the only one who has been puzzled by the price of foils! Noted Magic Online player Bing Luke posted this from his Twitter account earlier this week. 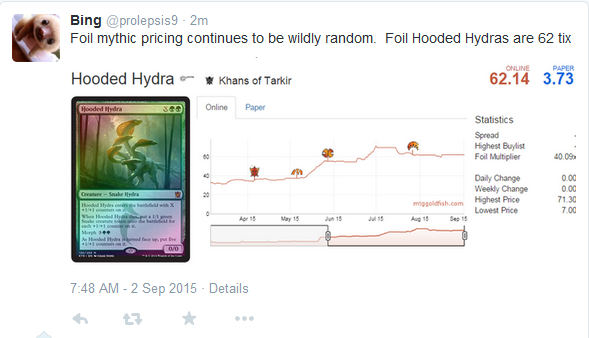 He makes a statement that the pricing on foil mythic rares is apparently random. But after developing my ideas around how the price of MTGO foils develop over time, I would argue it is only seemingly random and that there are simple processes at work which yield irresistible conclusions. A deeper dive into the nature of the MTGO economy will reveal those dynamics and provide a very useful speculative strategy.

For good measure, here's another recent screen shot, this time from Goatbot’s website. 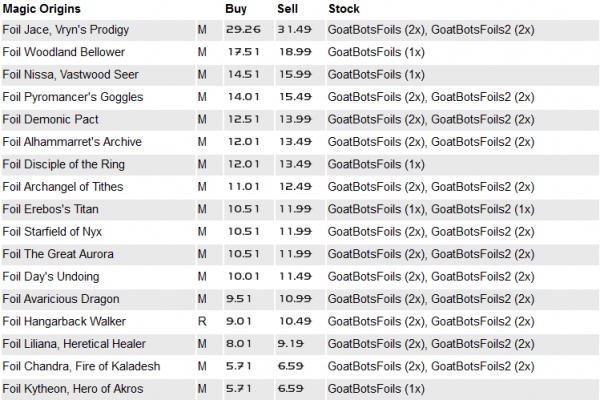 Both of the above screen shots generate some interesting questions, but let's examine the price list and see if we can discern any patterns. At the top of the list, it's no real surprise that Jace, Vryn's Prodigy shows up as the most expensive foil. But sitting just beneath that card is Woodland Bellower. Further down the list, Kytheon, Hero of Akros is tied with Chandra, Fire of Kaladesh for cheapest foil mythic rare. This list seems to confirm Luke's assessment of mythic foil pricing as being somewhat random, and more questions immediately spring to mind.

Why is Goatbot buying Woodland Bellower for 17 tix? Surely it's not worth more than double the value of Kytheon, Hero of Akros or Chandra, Fire of Kaladesh? Why do some foils have a premium relative to their non-foil counterparts, when the foil version of Jace is nearly the same price as the regular version? These are the types of questions that, when answered within a solid theoretical framework, can provide a benefit for players and speculators.

The key to understanding these questions is the theory of redemption. Come back on Friday for Part 2, when I'll explain the basic tenets of redemption and how it applies to foil mythic rares.