An oft-heard complaint about playing Magic online is that you don't actually own anything, even though you're putting money into the game. Cardboard has value - you can touch it, play with, sell it, it's yours to do what you will. If WoTC goes belly up, you can still play with all your cards indefinitely. The same cannot be said for MTGO.

WoTC actually owns everything to do with the online version of Magic. Although you have cards in your collection and you are buying and selling digital objects in what appears to be a free market, no single piece of your collection is truly yours. WoTC owns them, and they are just letting you use them according to the terms of service.

In practice, though, you have complete control of your collection and players and dealers alike feel confident enough that WoTC is a benevolent power that will not upset it's customers. Since players clearly believe in the fiction of ownership in digital objects, this belief breathes value into the cards, packs and tix of MTGO.

The other process that gives digital objects value is redemption.

The Details of Redemption

Redemption is a large and mostly unseen presence, working in the background of the MTGO market. It connects the digital market of MTGO with the real world market. Once you collect an entire set, you can redeem that online set for a physical copy for a small fee. The digital set is destroyed and WoTC ships you a factory sealed version. This provides a link to the real world, which keeps prices of redeemable sets somewhat in line with cardboard prices. Getting these in the mail is even more fun than you'd imagine.

If the online market gets flooded with a ton of cards, then redeemers will step up their activity in order to capitalize on the relatively cheap digital cards. If cardboard prices take off for a particular set, then redeemers likewise have an incentive to get to work. In both cases, redemption acts as a stabilizing mechanism which keeps digital and cardboard prices closer than they otherwise would.

Below is a table which holds sets from the last four years, along with prices from Supernova Bots on complete sets (prices in tix as of Aug 12, 2012) and beside that are prices from SCG (prices in $US as of Aug 12, 2012). The last column is a simple ratio where the price of online sets are divided by the price of cardboard sets. This allows some conjecture based on the ratio's value. As a side note, SCG might have inflated prices relative to eBay and your LGS, but it's not a big concern because the useful information is in the ratio - where we consider the the relative price of digital sets versus cardboard.

What Do the Numbers Say?

From the chart, it is obvious that the sets that are no longer redeemable have plunged in price online relative to IRL prices. The four lowest ratios are all held by the Shards block sets and M10. This suggests that speculators should be aware of pending cutoff dates in order to not get caught with depreciating assets such as the Eldrazi monsters.

Elspeth, Knight Errant, Noble Hierarch and Maelstrom Pulse are the three most expensive digital cards from Shards block, suggesting that playability in Eternal formats is what drives the price of cards after the redemption cut off date. Staples such as the Zendikar fetch lands will hold their value over time, but something like Eldrazi Monument might not.

As a block, Zendikar holds the highest ratios. This is not surprising, as redemption demand would have steadily reduced the online supply of cards and drafting of Zen block wrapped up last October.

Although M10's ratio is in line with Shards block, you might ask why M11 has such a low ratio compared to the Zen block sets. One hypothesis is that there are quite a few Eternal staples in Zen block, including the fetch lands, Jace, The Mind Sculptor and Stoneforge Mystic, while M11 only has a handful of fringe Eternal cards that have seen multiple printings, such as Birds of Paradise and Jace Beleren.

The Scars block ratios are a bit all over the place but have been coming down as rotation nears. Expect further erosion in these ratios as players let go of their Scars block cards and look forward to Fall Standard.

In and around October, the price of Scars block cards will bottom out with players dumping their former Standard staples for tix. After that, expect a gradual increase in the value of the Scars block mythics as redeemers seek to capitalize on the difference in price between digital and cardboard sets.

As a general rule, Fall rotation is the best time to be picking up Eternal staples and depressed mythics from the sets that have just left Standard.

Magic 2013 is not yet available for redemption, so it's ratio is still relatively low. Release events will finish on Aug 15th, and redemption will start up at the end of the month. At that time, the price of M13 cards as a whole will have found a near term bottom. In the meantime, be sure to round out the playsets of the cards that you like from M13. For the most part, the mythics won't get cheaper for a while.

A combination of factors ensures that a given set's price will largely be determined by the price of its mythic rares. Outside of Eternal staples, the only cards to hold value after rotation are mythic rares.

Mythics are the choke point of redemption. In order to redeem a set, you need a copy of every card from that set. Mythics are the hardest to come by, therefore they command the highest prices in the market. The sheer amount of drafting that occurs online limits the value of rares, and bulk rares routinely sell for .05 tix or less. Most of the value of a set is locked within the mythics.

As good speculators, this means that over the next few months, target only Eternal staples and mythics. Here are some examples from last year showing when a few mythics bottomed out in price. 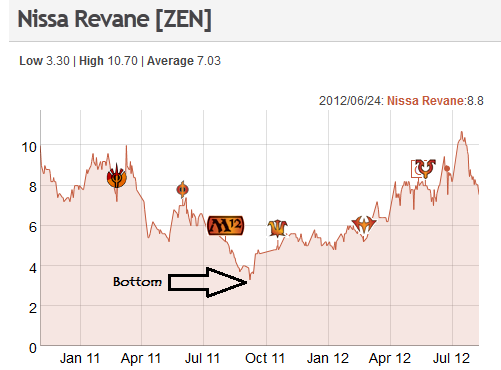 The chart for Nissa Revane shows a bottom in early September of around 3.5 tix. If you had waited till the end of October, you still could have bought in for an attractive 5.5 tix. The chart shows a steady uptrend following rotation, with some price weakness and the possible beginning of a downtrend after July. 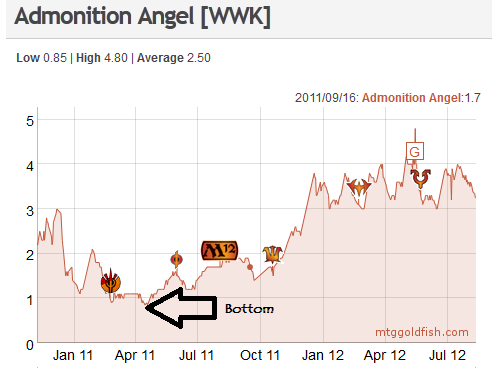 This chart is more typical of a junk mythic, and the bottom occurs much earlier in the year in mid-April. Once again, though, if you had bought during Innistrad release events, you still would have enjoyed a tidy profit by the turn of the calendar year. 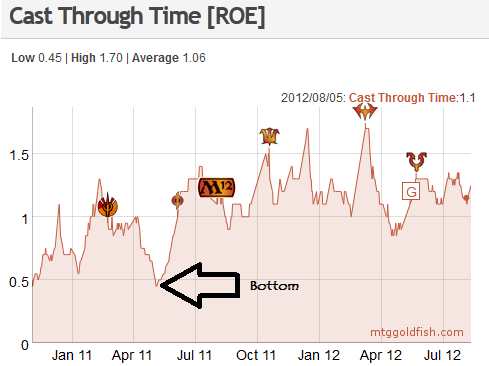 Another junk mythic, this chart shows another early bottom at the beginning of May. If you had bought Cast Through Time at rotation, you would be hard pressed to turn a profit on this card. It appears that playability still matters to the price of a card. In this case, Cast Through Time truly is junk and even redemption did not impact the price strongly enough for a speculator to turn a profit.

Keep this in mind when buying mythics in the Fall. Playability still matters. If a card has zero casual appeal, the market might have enough copies floating around to satisfy demand from redeemers. 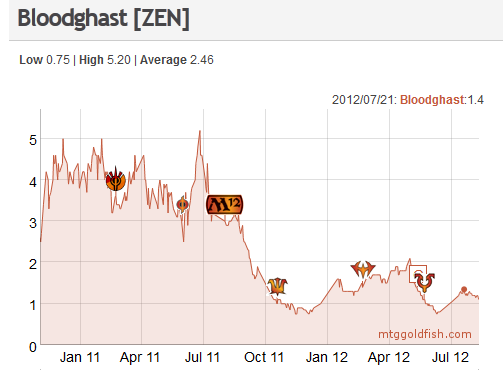 Lastly, here's an example of a card that saw steady play in Standard as part of vampire decks and sees fringe play in Modern as part of Small Pox decks. Clearly not the definition of an Eternal staple, buying these up at rotation would have yielded next to no profit. Rares are plentiful enough that redemption has little impact on their price at any time.

Redemption is a key part of the MTGO economy and market. It subtly supports the prices of in print cards and can drive up the price of rotated mythics. Using this knowledge, combined with some basic market timing tied to rotation, it's possible to reap consistent profits with little to no risk. For example, Quicksilver Gargantuan was at .35 tix in July of 2011. Mythics this cheap are almost always worth moving on (and if you have doubts, ask in the QS MTGO forum). It climbed up to 1.1 tix and settled to .7 tix at this point. This junk mythic doubled and tripled in price, based only on redeemers.