Below are the total set prices for all redeemable sets on MTGO. All prices are current as of December 26, 2017. The TCGplayer low and TCGplayer mid prices are the sum of each set's individual card prices on TCGplayer, either the low price or the mid price respectively.

This will be the last MTGO Market Report for 2017, so a few words reflecting on what happened this year feels appropriate.

Treasure Chests have been impacting the MTGO economy for over a year now. Initially they were rolled out cautiously as a new type of prize, which happened to mine the secondary market for value. Caution was set aside, though, and we ended up where we are today – with prizes for Constructed events consisting entirely of play points and Treasure Chests.

The initial impact in late 2016 was to usher in a huge bear market in non-Standard cards. There was a steep loss in confidence as the market steadily sold off into early 2017. It was easy to think this was a direct effect of the Treasure Chests, but really it was a secondary effect. The cards entering the market from chests were making an impact, but the main driver of prices were the number of players souring on MTGO a result. 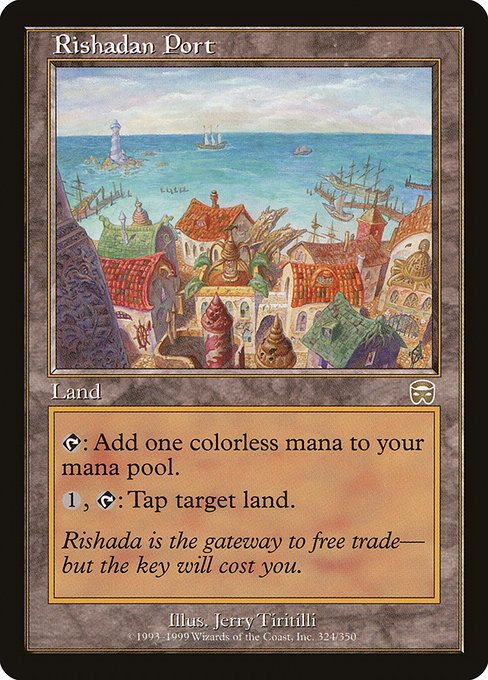 A year later now, it's easier to see that the MTGO economy can sustain the price of cards being reprinted in chests. There's a big "but" attached to that statement, though. If it's not a format staple, then the price will come under steady downward pressure as the trickle of supply erodes the value of niche cards. Infernal Tutor and Rishadan Port are two prime examples of cards that have previously held high prices relative to their level of play and have come down in price significantly as a result of being opened in Treasure Chests.

Bookkeeping is Hard (at least for me)

Heading into the fall of 2017, I resolved to reboot the Market Report portfolio and its reporting. The goal of the reboot was to provide more information to readers about what I was doing and to generate a record of my thinking around the trades I was making.

I think this practice is a great one that can help speculators generate insight and discipline in their pursuits. I'm slowly building a base of data to draw from which can directly influence which trades I decide to pursue and which ones I decide to avoid. Increasingly, I am only interested in pursuing trades with a strong economic advantage. This means there is some kind of feature of the MTGO economy that gives a directional bias to the trade; it's not just buying singles and hoping the metagame and the market pushes their price higher – I'm relying on seasonality of player sentiment or redemption. 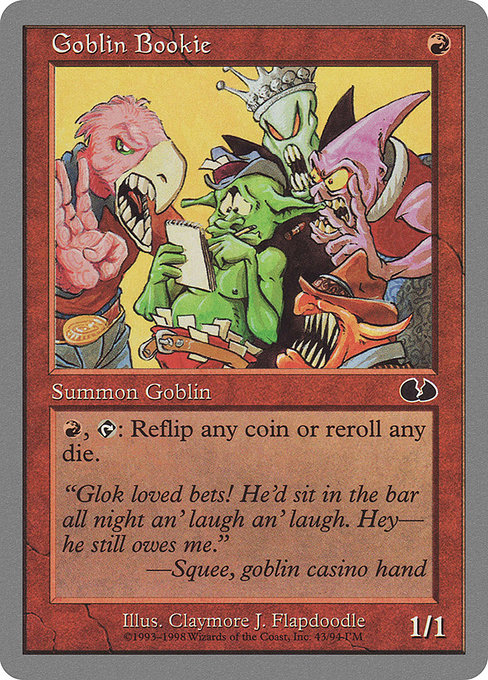 The downside to this practice of record keeping is that it's been difficult to maintain for me personally. Although I have dutifully logged my trades, generating summary results and keeping tabs on my thinking are two areas of the reboot that need greater attention from me.

Here's an example of how more up-to-date record keeping could have helped. Although I have learned my lesson on speculating on niche cards, it was still a painful one delivered by Tangle Wire. This trade has turned into a complete loss for me, but if I had been keeping up and reviewing my strategies I could have mitigated the loss to some degree.

For Tangle Wire in particular, I wrote my initial thesis down as the following,

Big drop in 2017 tied to emergence of Monastery Mentor in vintage. Shops decks moved away from Tangle Wire. Recents bans will affect metagame.

This is a reasonable thesis, though it didn't hold up in the end. The big drop was due to multiple factors, including Tangle Wire showing up on the curated card list for Treasure Chests. Also, there was an implicit assumption in the thesis around Shop decks returning to use this card. I think it's "okay" to have ideas that turn out to be wrong, because that is part of the learning process, but the big mistake came in the follow up to the original thesis.

Reevaluate after XLN is released, but so far so good.

There was an initial bump in price in the weeks after the bans were announced, which made me think I was on the right track. However, if I had followed my own advice and reviewed the trade in October, I would have found that the price was in a downtrend and that the Vintage metagame had not developed as anticipated. Although Tangle Wire was showing up in Shop decks, it wasn't ubiquitous. There were plenty of Shop decks doing well that featured zero Tangle Wire. 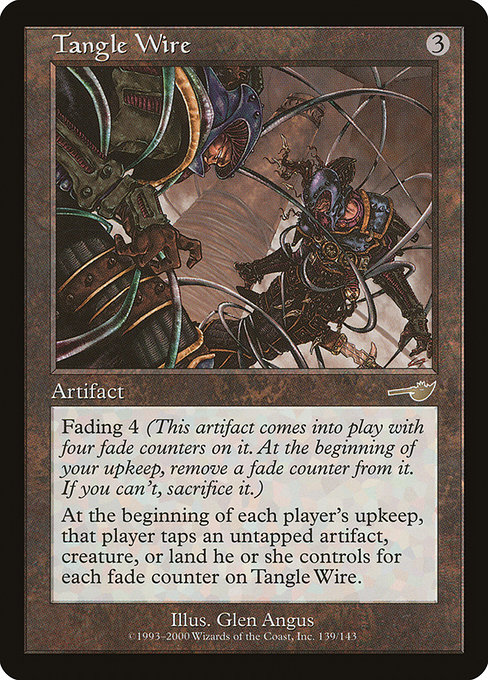 If at the end of October I had properly reviewed this trade, it would have been easy to see that I had made mistakes in my  initial thesis and that selling was warranted. A loss of 75 percent would have been likely, and that's a lot better than my current on-paper loss of 100 percent. I still hold my position in Tangle Wire, and at this point its a complete write-off that is not worth selling for any amount of tix at current prices, even if I can find enough buyers.

My plan now is to book the 100-percent loss and to forget about this position. Maybe down the road Tangle Wire will be removed from the curated list and slowly start to rebuild value, but as of today it will take too much time and effort to offload these cards for a minimal amount of tix. I'm better off absorbing the loss and the lesson, saving the time involved in the transactions and moving on. Better record keeping would have helped to avoid this situation.

I have been thinking and writing about the MTGO economy for years. Economics is near and dear to my heart, and exploring economic ideas in the context of MTGO has been a ton of fun. The regular practice of writing this article has been great for firming this all up. And believe it or not, the biggest benefits to this project are only becoming visible years later.

The big thing going on here is that generating knowledge and awareness around applied economics and speculating takes time and effort.  That consistent effort is rewarded in time by absorbing new ideas and strategies, while at the same time minimizing and avoiding weak strategies. It takes time to sort through the good and bad ideas, though, as being lucky can paper over results in the short term. Speculating during a bull market is also a good way to feel like you know what you are doing.

On the flip side, speculating during a bear market will quickly lead to doubt about what you are doing and why. I believe that MTGO went through a bear market up to the release of Modern Masters 2017, and this experience has had a direct effect on what I want to be doing as a speculator. 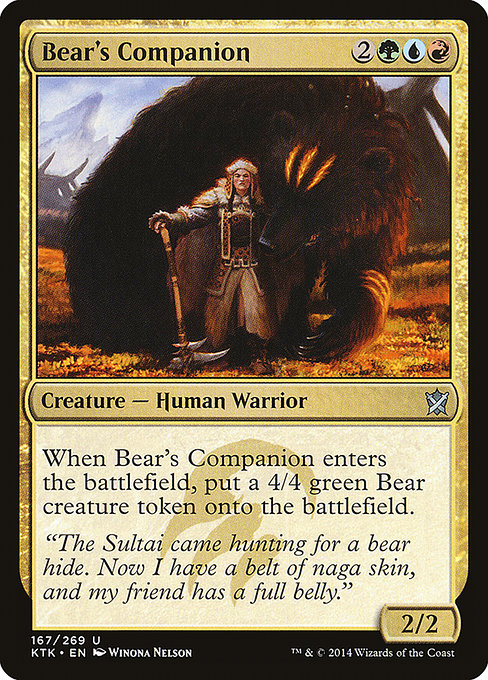 Identifying bull and bear markets is a tricky topic. It's often only clear in hindsight what is happening, but pursuing trades with an economic advantage means that what the market is doing matters a lot less. My current efforts are focusing on these types of strategies while avoiding ones that rely on the overall market direction.

Having applied effort over time on these strategies leads to a high degree of trust and faith in them. I've repeated them multiple times, and the results are now guiding my current choices around which ones to employ and which ones to avoid. The timing of employing these strategies is also critical. The fall/winter window is clearly the best time to be speculating, and it's only through repeated effort over years, backed up with economic reasoning, that has lead me to this conclusion.

For a complete look at my recent trades, please check out the portfolio. I've been preparing for Grand Prix Toronto, which features Modern Constructed, and one of the decks I have been testing is an interesting take on the Death and Taxes archetype. Check out the deck in this tweet.

The dip into blue brings counter magic as well as a card that never lived up to its hype while in Standard. Skaab Ruinator is a massive flying body at a seemingly low cost that can be played from the graveyard, but the non mana cost of removing creatures from the graveyard turned out to be too onerous. This deck gets around that restriction by using Aether Vial to flash it in and Smuggler's Copter to put creatures into the graveyard. 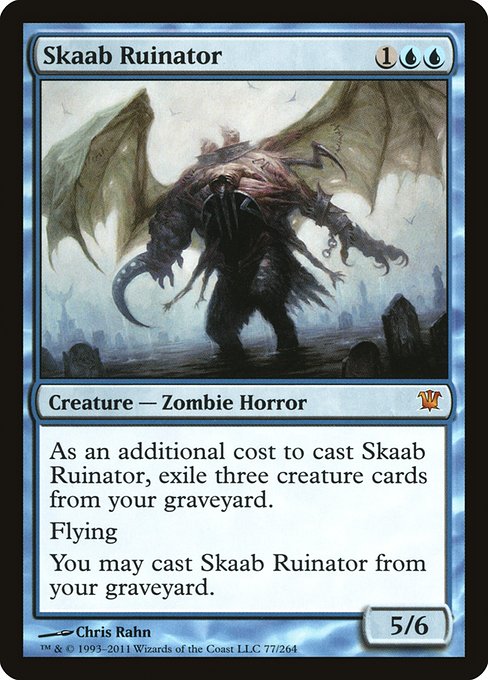 The body on Skaab Ruinator is massive. It's able to block and kill Gurmag Angler, with only a powered up Death's Shadow being truly troublesome. That's where having flying also helps.

It's not clear if this card is an overlooked gem, but in testing it has been performing well in combination with Aether Vial. From time to time, you'll also cast it out of the graveyard for a little extra value. Fortunately, the card is quite cheap at less than 0.1 tix, so taking a shot on this one won't break the bank. It's fun to make long-shot bets, and they are more feasible if they are cheap.