Below are the total set prices for all redeemable sets on MTGO. All prices are current as of December 5, 2017. The TCGplayer low and TCGplayer mid prices are the sum of each set's individual card prices on TCGplayer, either the low price or the mid price respectively.

With only three sets still available for redemption, the purpose of tracking both the digital and paper prices has largely run its course. I will continue to track set prices with an eye to the overall market, but look for a redesigned price section next week. If you have any feedback on what you might like to see reported every week, please leave a comment.

The big news this week is the return of Vintage Masters (VMA) draft instead of the previously scheduled Lorwyn draft. Check out the full announcement here. The real surprise is that they've updated the art on the Power 9 to be the original art and original card frame. This will be the first time these are available online, combined with their super mythic rarity and a short release window, these are going to be hot commodities.

There's not much strategy for speculators. If you like drafting Masters sets, then you'll enjoy drafting VMA. Good luck in opening a piece of Magic history! The one thing that speculators might leverage is the surprise reprinting of a couple of Legacy staples in Force of Will and Lion's Eye Diamond. Both of these cards have been showing some price strength lately and are up 25% since the release of Ixalan (XLN). Depending on how the market develops, they could be worth a look while VMA is being drafted.

The set price of XLN has recovered this week back over 60 tix. This is a due to a combination of a slowdown in draft while redeemers are still capturing the price differential between digital and paper. Interest in Standard seems quite low with a stable and uninspiring metagame dominated by the Energy mechanic. I still maintain that a ban in the near term is unlikely, with the release of Rivals of Ixalan scheduled for January and the associated Pro Tour event featuring Modern constructed. I think the most logical time to look for a card to be banned in Standard will be in February, in the post Pro Tour timeframe which is an option they have left open for making changes to any format. Here's the last announcement for reference.

With all that in mind, I decided to liquidate my remaining Standard only positions, including booking a loss on last week's spec on The Scarab God and a longer term holding in Heart of Kiran. A stable Standard metagame is a bad environment for speculating and there will be plenty of reasons for players to sell their cards over the next few weeks. The opportunity cost of holding Standard cards is also high right now, with IMA boosters about to go on sale. I'll wait for the release of Rivals of Ixalan before considering Standard cards to speculate on.

This week I did make a sell out of one of my Modern holdings in Karn Liberated. Although most Modern cards are still in an upswing, and the Modern Pro Tour is still ahead of us, this card looked like it had peaked at close to 40 tix. It also looks like Tron decks are not taking up a growing share of the metagame; the die hards enjoy the deck, but it's not grabbing new interest. It's definitely possible that something changes to favor this card and Tron decks, but I am looking for reasons to start selling my Modern positions over the coming weeks and this was one way to start. I don't want to try and convince myself that a particular card or strategy is just about to break out. It's always easier to sell when interest in the format is high and players are still anticipating events to come.

I took a screen shot of the weekly gainers from mtggoldfish as it tells a particular story. Have a look. 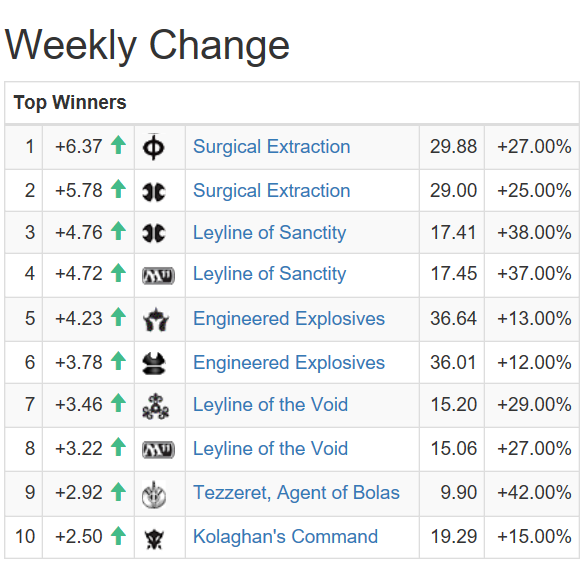 Although they get the benefit of having multiple printings, the top eight cards share a few characteristics. They are cheap to play sideboard options that multiple decks have access too. The original sets they showed up in were spring or summer sets, either the third set of block or a core set. Finally, they have not been reprinted lately in a Masters set lately. These are all characteristics of cards that speculators should be aware of if they want to find success.

XLN boosters bounced back up to 3.2 tix, but have fallen again back to around 3.1 tix. The outlook on these is unchanged. Don't be caught holding excess boosters as we get closer to Christmas. Vintage Cube and Vintage Masters (VMA) draft is going to soak up a lot of drafters attention, leaving XLN as a second or even third choice. The price of this booster has a strong negative outlook.

On the positive front, Iconic Masters (IMA) draft is going to wind down this week, and these boosters have already gone on sale somewhat, dropping from 6 to 4 tix. There should be another wave of selling in the coming days so be ready to scoop these up at 3.5 tix or less. I will be buying as much as I can at this price; they will be excellent candidates to recover the 4 tix price over the coming months and boosters are a very liquid object with a low spread. They are perfect for speculators with excess tix.

For a complete look at my recent trades, please check out the portfolio. Infernal Tutor is a card that I've successfully speculated on in the past. It's regularly cycled up over 40 tix and down into the 20 to 30 tix range. With that pattern in place, I bought this card for the portfolio a few weeks ago at about 20 tix, with an eye on the Legacy and team Grand Prix events slated for 2018. Subsequently I've watched the price drop steadily and it now sits below 13 tix. Have a look at the chart, courtesy of mtggoldfish.

This is another example of how a card that is lightly played but expensive can have its price greatly reduced by the influx of supply from Treasure Chests. I think there will be an opportunity on this card in the future, but the steady drop past the previous price floor is a big red flag. As a result I decided this morning to cut my losses and sell my copies.

I have to remind myself to avoid niche cards, previously valuable due to their scarcity, that are being printed in Treasure Chests. Modern staples have the demand to support their price but a card like Infernal Tutor does not. I'll be watching this card for signs of establishing a new price floor, but for the time being it looks like it's going to continue dropping and head lower than 10 tix.