Hi guys, welcome to another article.

Last week, Grixis Midrange and Esper Approach were the decks occupying the largest portion of the metagame. However, many things have changed in a week's time. If you look at the Standard metagame from MTGGoldfish, here's roughly what you will see: 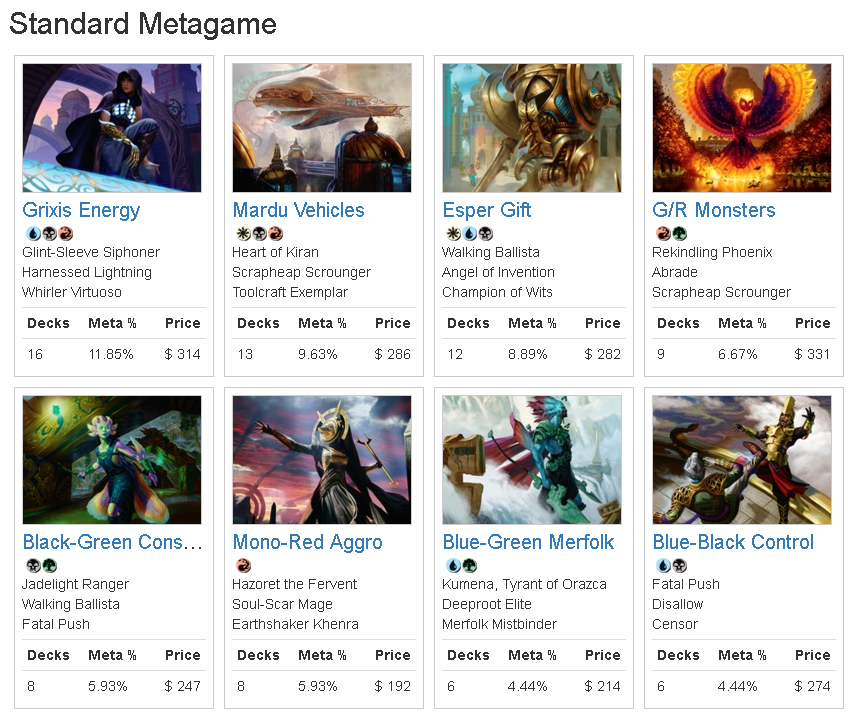 This was predictable based on previous sets. Control and midrange decks tend to dominate during the early days of the new release, and then aggro decks will rise after players figure out the right combination of cards that they need to beat the slower decks. After that midrange and control decks will take turns to come back, and these will basically form a metagame change cycle (midrange -> control -> aggro -> midrange -> repeat).

A rough overview of the meta right now: UG Merfolk and GR Monsters are the new aggro deck additions to Standard after quite a long time (mostly because the Energy decks were dominating). Mardu Vehicles came back as the best aggro deck, while Grixis remains as the best midrange deck. If you followed my article last week, Hazoret the Fervent did actually increase about 2 to 3 tickets in price due to Mardu Vehicles. 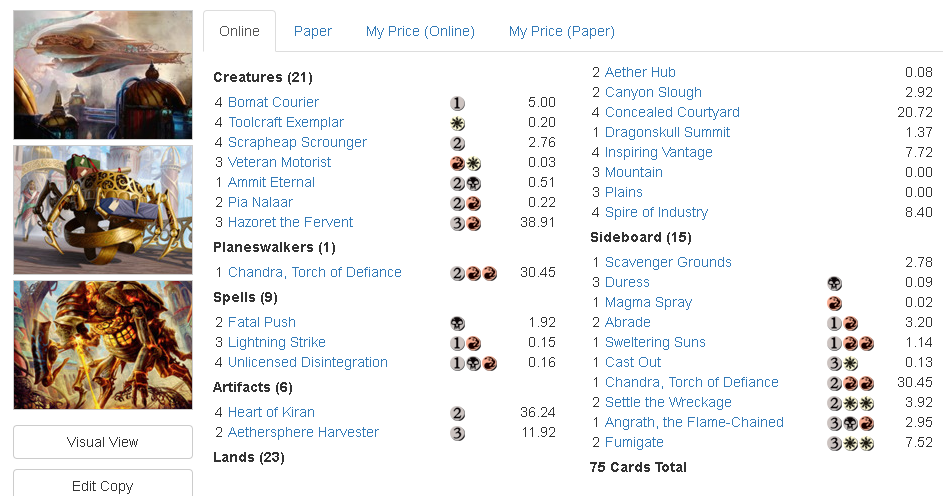 As always, I will find some underrated decks to talk about. At the first week's RIX Standard Star City Games events, I found the deck by Jim Davis quite interesting and surprisingly budget-friendly.

There are only five rares in the deck including the two white-blue dual lands. This deck is very similar to the white-blue auras deck during Theros block, with the Heroic theme. The current version abuses Sram, Senior Edificer's ability to draw a bunch of cards, and mostly depends on Adanto Vanguard's ability to steal wins.

This deck is cheap but in my opinion not easy to beat if you are playing a midrange or control deck. I think we should give this deck another chance even though it didn't make it to the online metagame.

Legion's Landing // Adanto, the First Fort is a good card to beat Mono-Red and Mardu Vehicles, in my opinion. Most of the aggressive creatures have very low toughness so the 1/1 token can trade profitably with them, and if it sticks around lifelink is very annoying for the aggressive players.

Besides, the Tokens deck in Standard also plays this card mainboard. Although these decks might not look impressive on paper, in theory token strategies are good against midrange and control decks because of the go-wide strategy. For this card, since the decks that play it are not popular right now, I suggest putting it on your watchlist and buying into playsets whenever it reaches a low point.

Sram, Senior Edificer was played in an artifact combo deck in Modern but its price never went up before. However, this time, its price went up by about 1.5 tix when Jim Davis got third place in the SCG Classic. What I would do is observe how good this white-blue auras deck is online, and buy playsets if I think players will have a hard game against it with the top decks in the format like Mardu Vehicles and Grixis Energy. If this deck is good, it will only be a matter of time before it wins some leagues.

Last week I mentioned that I wouldn't buy into Kumena, Tyrant of Orazca because it was overpriced at that moment. However, because this deck didn't perform well in the last SCG event, and players online didn't 5-0 many leagues with this deck, Kumena dropped in price drastically.

I think this card will still drop a bit until it reaches 6 tix. Based on price lists online, playable mythics will hardly drop below 5 tix and Kumena is a four-of in Standard UG Merfolk. We still haven't seen this card in Modern yet, but if Kumena is really good there I predict the price of this mythic creature will go up to 10 tix. In conclusion, if Kumena's price does go down a little bit lower, buy playsets of them as investments.

Back to Standard UG Merfolk, another card I suggest keeping your eyes on is Botanical Sanctum. This card, as most of you know, dropped price a lot due to the recent B&R announcement.

A bit more findings about Botanical Sanctum: This card is played in the latest Lantern Control list which mainboards four copies of Whir of Invention. Past experience tells me that online players seldom pick slow deck that might cause a timeout in games but if this version with Whir can end game faster, I think its advisable to have a look at the list. 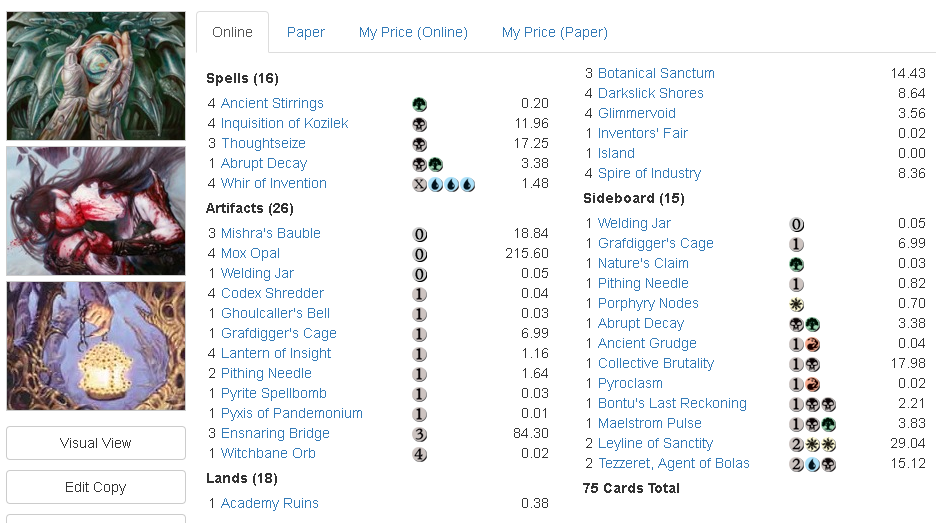 Besides Lantern Control, Botanical Sanctum is also played in many other decks like Standard Sultai Midrange, Temur Monsters, and the various versions of Bant Company decks in Modern. Currently I assume the supply for this card in the market is very high and I see that as a good opportunity to stock up on this card when it touches the 3.5-ticket mark.

Aside from these two decks, I think the new planeswalker Angrath, the Flame-Chained has good potential:

This card will probably be a sideboard card at the moment. But as I said, the metagame will shift soon, once the midrange players find the correct removal suite to beat the fast decks. Therefore, every deck needs to get prepared for the weeks where the scene will be flooded with midrange decks.

Let's take the top two decks currently as example: Grixis and Mardu. Grixis Energy, as a midrange deck itself, needs something to be the "mirror-breaker" and Angrath is what they're looking for. Then, for Mardu Vehicles, in order to fight against midrange decks with plenty of removal, they need to "out-midrange" their opponent by switching gears into a slower deck. Thus, I suggest buying in to playsets of Angrath as investment as it's so cheap right now.