Welcome back! In light of the Standard bannings, I recommend taking a look at my last article in case you missed it. As I suspected, Standard is just too important for Wizards's bottom line and Magic's overall health for them not to take action. With Attune with Aether and Rogue Refiner banned, Temur Energy will no longer be the dominant midrange deck it used to be. Grixis Energy Midrange will be poised to be a top-tier deck moving forward, and various Pummeler and GB Constrictor decks should remain viable competitive options, at least in the short term.

What was surprising was the nerf to Ramunap Red. That will make some of the forecasting in my last article incorrect, so I want to take a minute to reflect on what a nerf to Ramunap Red means for the format. In my article, I noted that Ramunap Red would be the deck to beat in a post-Energy world, but now it is unlikely that a hyper-aggressive Red Deck Wins iteration will sit atop the format. Yes, there will be various aggro shells vying for top-tier status, but none will be as blisteringly fast or as consistent as Ramunap Red was last season. This means that we should expect midrange decks – anything from Grixis Energy Midrange to token strategies – to claim a large metagame share. 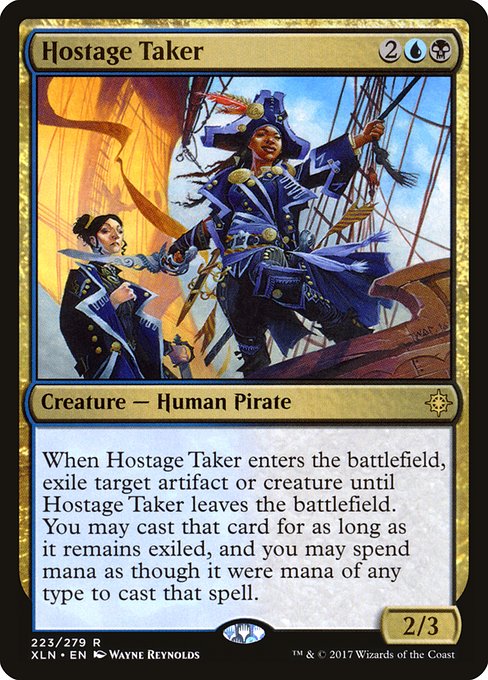 What this means is that slower cards that don't gain life (like Hostage Taker and The Scarab God) will likely be much better than I gave them credit for in my article. I said that The Scarab God would likely fall to around 20.00 tix, and I no longer believe that to be the case. The Scarab God shot up in response to the announcement, and I expect it to stay high. With Ramunap Red brought to heel, I personally expect Blue-Black Control or Esper Approach to become the best deck in Standard.

The latest Treasure Chest update was neither widely advertised nor discussed. Instead of receiving its own announcement, it was buried in the Rivals of Ixalan preview league article. In fact, there was only one article discussing it, which you can find here.  Below I've made a graph covering all of the changes for Standard and Pauper cards. Like the last Treasure Chest update, the purpose behind most of the changes was to clean up the Modern and Eternal chaff. The value of curated cards is now higher, resulting in the EV of a chest rebounding to a healthy 2.53 tix. 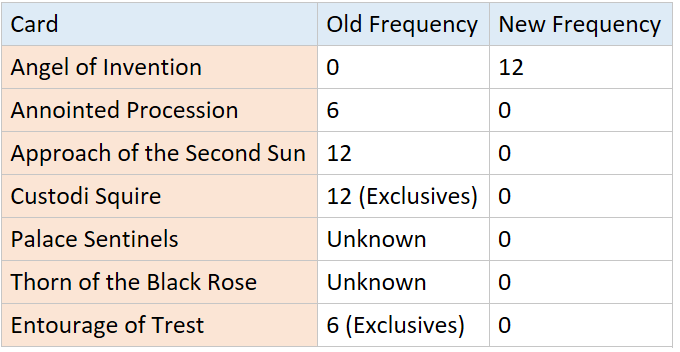 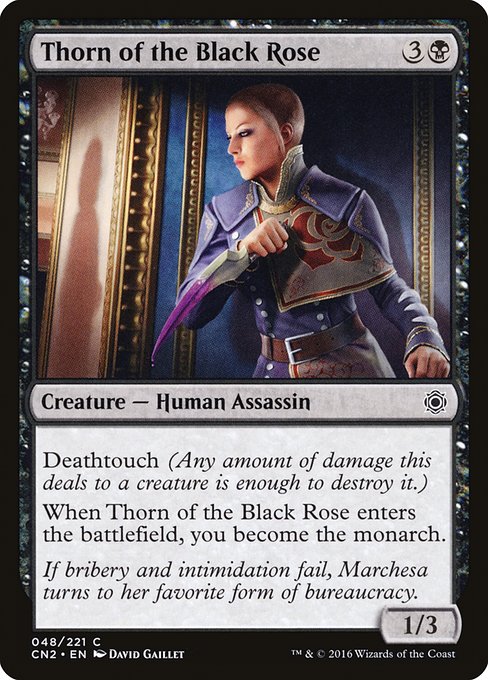 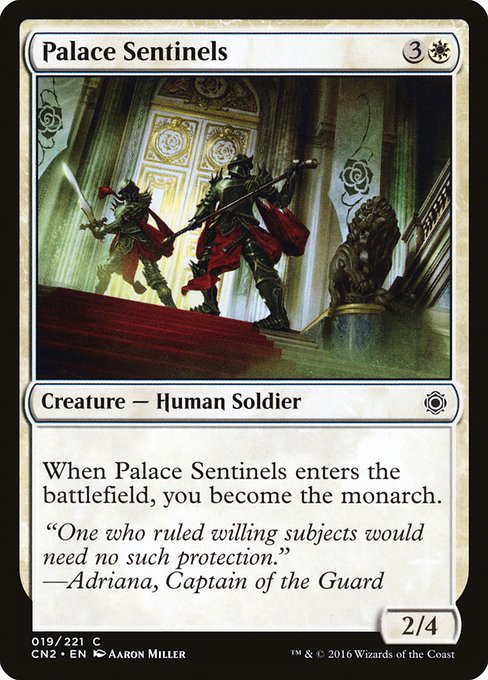 I found this latest update to the treasure chests...uninspired. At a time when Pauper is shooting up in popularity, there is now no new supply of two of Pauper's most expensive cards entering the market. If Pauper continues to pick up steam, expect these cards to shoot closer to 20.00 tix. Palace Sentinels currently sits at 8.69 tix, and I'm a buyer at that price. Thorn of the Black Rose sits at 11.78 tix now, and is unlikely to dip below 10 tix at any point during the next few months. I think Entourage of Trest and Custodi Squire both make for reasonable buys. Both were "in print" for exactly two months, at a low frequency, in the Exclusives list. I bought my copies for less, but you could do worse than 2.00 tix for Entourage and 0.45 tix for Custodi Squire.

Regarding Standard, I'm a bit miffed that there were so few changes to the curated list. Why Botanical Sanctum remains at a 12 frequency while cheaper lands Blooming Marsh and Inspiring Vantage remain at a 20 frequency is beyond me. It suggests that the curated list is not being closely managed.

Approach of the Second Sun and Anointed Procession become legitimate speculation targets now that their supply infusion has been cut off. Overall, though, I don't expect the downward pressure of treasure chests to significantly hurt Standard cards i more people are interested in Standard than they have been for a while, and if this format proves to be fun and diverse, we can expect to see a broad increase in Standard demand.

Signing Off: What to Expect Next Week 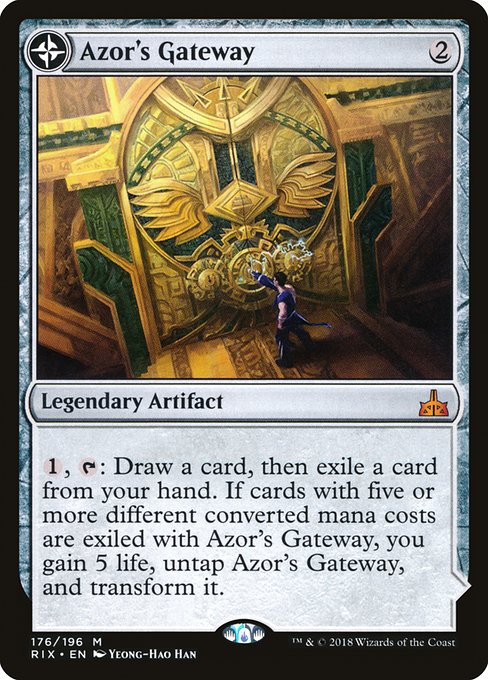 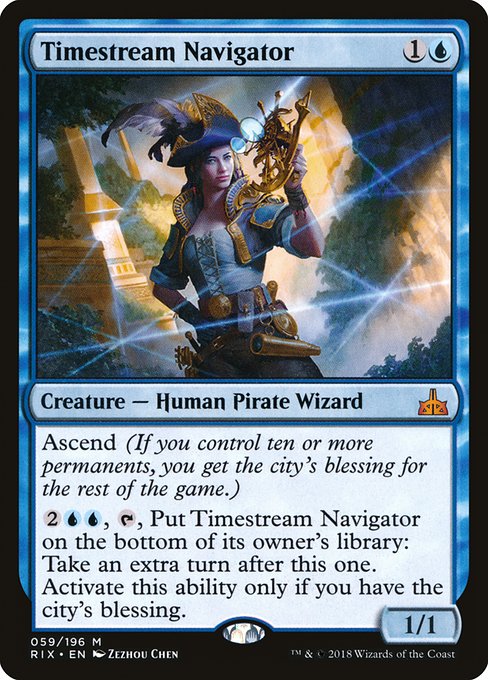 Next week, I want to take a bit of a deeper dive into mythic card prices on MTGO. Over the summer, I provided you with tools to evaluate Standard uncommons, and next week, I hope to provide you with tools to evaluate Standard mythics, focusing on mythics with converted mana cost three or less. Historical awareness of card prices is really important for making the most of your speculations. It helps you get a feel for the market and a feel for when is a good time to buy or sell. I hope you will find the article useful.

A copy of my portfolio can be found here. I have begun selling off some of my aggro speculations, most notably Scrapheap Scrounger and Earthshaker Khenra. I was surprised by the decision to nerf Ramunap Red; Earthshaker Khenra's price is likely not going to recover, so I'm going to do my best to cut my losses and move on.

I encourage you to exercise patience as the Standard metagame begins to pick its winners and losers. Some cards will go up in value over the coming months, so if you believe in a card, hold onto it. Vraska's Contempt is one such card that I'm holding onto, despite its price shooting up over the past week.

This week I'd like to share with you a simple card that I think is really cool and flavorful. World, meet Bestial Domain. It's rare to find art that so perfectly fits your design idea. I'll see y'all next week! 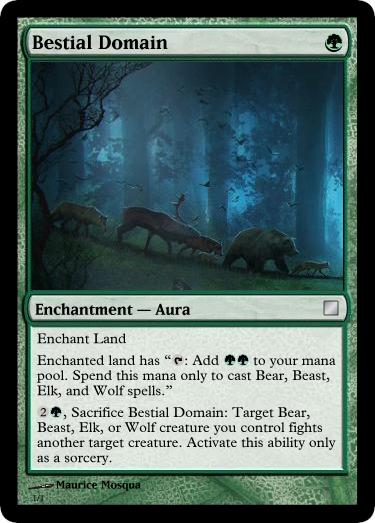