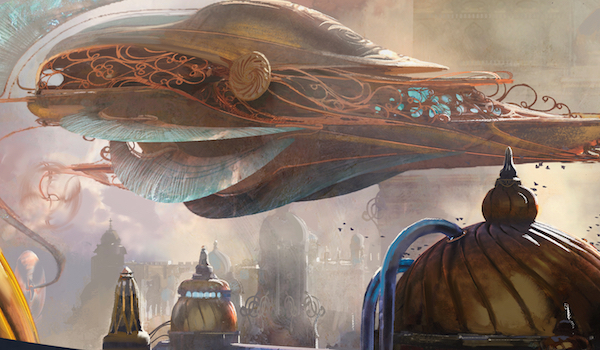 We had quite the bombshell dropped on us this past Friday. Wizards published the decklists for the Challenger Decks they'd alluded to earlier in the year. Now, obviously the cards included on these lists will drop in value, especially the ones that are included as multiples (looking at you Heart of Kiran).

Back before we had the Planeswalker decks, WotC made Event Decks. These often had a chase card or two in them—we had one that contained not one but two copies of Stoneforge Mystic, and one that came with both a Verdant Catacombs and a Bloodghast). Event decks were far from strong decks capable of taking down even a remotely competitive FNM event. They were more like thematic decks created by WotC meant as a stepping stone to get new players into trying out FNM.

The new Challenger Decks are very different from the Event decks of old. All four are somewhat watered-down versions of tier-one decks (and they aren't watered down much). I could see someone actually winning an FNM with one of these decks—instead of a stepping stone, they have a full competitive deck with some upgrade potential (i.e. the decks could be upgraded somewhat with additional copies of some cards, but are very playable as is).

Hopefully many of you are in the habit of reading through the Discord channels when you can—when these were announced my phone blew up with Discord notifications. Many QSers were jumping to buylists to unload any and all copies of cards that were spoiled in the decks. Buylist prices for many cards have dropped dramatically (25-30% in just a day, as I'm writing this on February 24) presumably because the stores have been flooded with people buylisting to them.

Having had a day to discuss these decks with both QSers and some of my friends, there are some important things to take away from the introduction of these decks.

1. WotC has taken a hard stance on the price ceiling for Standard. The threat of these cards potentially tanking in price will likely keep stores and players from speculating on Standard a lot. We don't know how often these decks will come out, but if WotC continues to keep them this full of value then we will see a very low price ceiling on Standard staples. This brings up some further points to consider.

2. These decks will be available at big-box stores (like Wal Mart, Target, etc.). This means that market value will likely adhere to MSRP. With the From the Vault series, only game stores had access to the product line, which meant supplies were limited and they could charge whatever they wanted. This often led to prices considerably higher than MSRP.

With Challenger decks, however, one could just go to their local big-box store (which almost always follows MSRP for these types of products). As a result, game stores that try to charge more will simply be left holding them as players buy up the copies from big-box stores.

3. These particular decklists seem to heavily favor Kaladesh and Amonkhet blocks, which are set to rotate out in the fall. WotC may have chosen to put a lot of the valuable cards from these sets for several reasons:

This last point is important to consider. The question is, are these decks heavily skewed towards Kaladesh because it's so powerful, and thus to be competitive the decks would likely need to include a lot of Kaladesh cards? Or was it chosen because the block as a whole is already nearing its end of legality?

If it's the former reason, then the next round of decks may hurt the secondary market even more if more of the newer set's staples are included. If it's the latter, then we will likely see a shift toward people unloading soon-to-rotate sets even earlier (likely before the decklists are announced).

4. We don't know how often these decks will be released. My biggest concern is that if they prove to be successful and generate a lot of profits, then we may see them more and more often (as with Masters sets). That would make speculating on Standard an even riskier strategy than it already was.

5. As I stated in the Discord channel, this honestly looks like WotC is carving out some of the secondary market with these decks. These decks come off as a halfway method for WotC to sell singles without selling singles... After all, with the MSRP of $30 if you only need a few cards in the deck and there's so much "value" in it that it makes perfect sense to buy the deck, take what you need, and try to trade off the rest.

If this does happen on a large scale, then I expect we'll see near-bulk prices for a lot of playables that happen to be included in decks with very desirable staples. We saw this with the leftovers of the "Mind Seize" deck back with the 2013 Commander products (as someone who has a ton of bulk rares, I can honestly say that of all my Commander 2013 bulk rares a good 60% came from just that deck). This will of course keep the price of Standard very low, which again seems like one of their obvious goals with these decks.

Unfortunately, this could also seriously harm speculation for eternal cards that happen to be legal in Standard. If you do happen to speculate on a rare or mythic that isn't big in Standard, which then happens to end up in one of these decks, the price ceiling on that target drops dramatically (especially if it ends up as a more than one-of).

6. With all of these new products coming out from WotC including a plethora of reprints, I expect we'll see more players flock to "locking in" value by targeting Reserved List cards (either for speculation or when trading in). Don't be surprised if the MTG Stocks Interest page starts showing a ton of cards with asterisks behind them again, and we'll likely see another price jump on the more playable options.

I can personally admit that my speculation targets are dropping off like flies. I'm pulling back from investing a lot of money in any picks (I used to speculate on a lot more cards than I do now) because I don't see WotC pulling back the reigns on their reprint frenzy anytime soon. I'm starting to wonder if they forgot that the original intention of Magic was to be a collectible trading card game—and that collectibility requires scarcity.

I think these decks may gave WotC a quick boost to both profits and FNM participation. However, I am deeply concerned that WotC is either ignorant of, or choosing to ignore, the dangers of reprinting so many valuable cards in such a relatively short time span. It seems they may have forgotten some of their follies when they printed Chronicles, and are on pace to repeat themselves.

My suggestion to readers is to take a step back and consider how you speculate, especially on anything that is Standard-legal. It's entirely possible for WotC to throw in that "Commander spec" you started hoarding when it first came out into any of these new decks in multiples, which will flood the market and likely ruin any real profits that can be made on such a spec.

I'll be perfectly upfront that nothing in these decks really hit me hard. I have a few copies of some of the reprints, and one of my few specs got hit (Kefnet the Mindful, for those interested), but I decided a couple years ago not to speculate on Standard because I didn't have a consistent out at the time.

That said, I'm still troubled by WoTC's shift towards printing more and more products, which hurts the secondary market so instrumental to keeping the game going. People are far less inclined to spend money on boosters if the cards in those packs are basically worthless on the secondary market.

One thought on “Insider: Challenger Decks and the Secondary Market”