Part of our recent growth and additions to the site is the recruitment of some amazing people – in this instance Guillaume (@poppu_mtg) our new data analyst and Diego Fumagalli (Visualizing Magic) our resident graphic artist.

They came together and produced some amazing Infographics that have tracked the QS Cast and provided the numbers, and data, to track both Tarkan and myself since we’ve been duo-hosts. In this update they tracked Episodes 37-74 and provided graphics spanning from Overall to 30, 60, and 90 days.

You can be sure that we will provide monthly updates to reflect recent data. I have the great pleasure of showing these off and providing a statement from Guillaume to give us some context behind these numbers and providing some additional clarity. Let’s see how the QS Cast has fared for this update!

The trends observed over the 2017 cycle of picks are out in full force again in early 2018: Eternal formats are way kinder to our casters than Standard - although some of this can be attributed to the generak sentiment on a stale Standard metagame.

Over the first couple of weeks' worth of picks, the results from Pro Tour Rivals of Ixalan allowed our listeners to benefited greatly from the advice dispensed by Chaz, Tarkan and also Rob via his Daily Stock Watch: Collective Brutality (+84%) and Bedlam Reveler (x4-5) both had huge spikes from the time they were first mentioned, thanks in large part to the Mardu Pyromancer archetype bursting into the Modern scene and finishing 2nd at the PT.

Chaz wins the "Rabblemaster Award", given to the card that everyone thought could be good but still jumped to an insane price (8-fold in this instance), with Jadelight Ranger: the card is a real powerhouse in the current metagame, and is featured prominently in the RG Monsters build that had very solid results over the first couple of Team Constructed events on the SCG Tour.

It would also not be a QS Picks Report without Tarkan riding the Reserved List hype to huge gains, and this month's winning choice is the foil printing of Second Chance (+43% in 30 days, holding steady): being part of the original wave of foils back in the Urza Block, these are starting to disappear rather quickly.

The fact that it has the magical words "extra turn" on it kind of acts like catnip to casual players, which doesn't hurt. In parallel, Dire Fleet Daredevil is doing quite a number to Chaz's stock (-62% over 60 days), but there is still hope, as the card is seeing more and more play across all formats as maindeck 2- to 4-of - and the price of foil copies has already rebounded to preorder numbers.

The same case cannot currently be made for Azor, the Lawbringer on Tarkan's side (-74% over 60 days), but it still has a long life in Standard and already fits in some UW Control shells which could gain more support from Dominaria and the Fall set.

The QS Cast had a relatively slow start of the year, with only 6-8 picks over the first 6 weeks of 2018; since then, Chaz and Tarkan have made many more picks so expect a lot more price checks in the coming weeks! 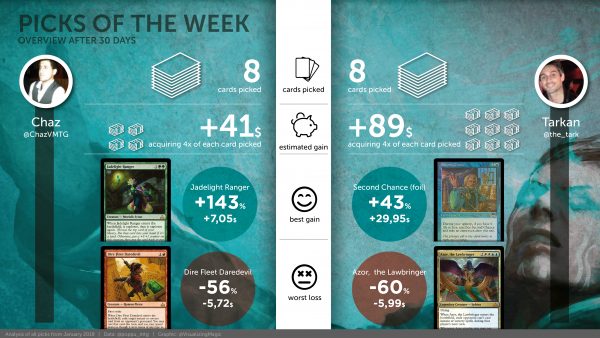 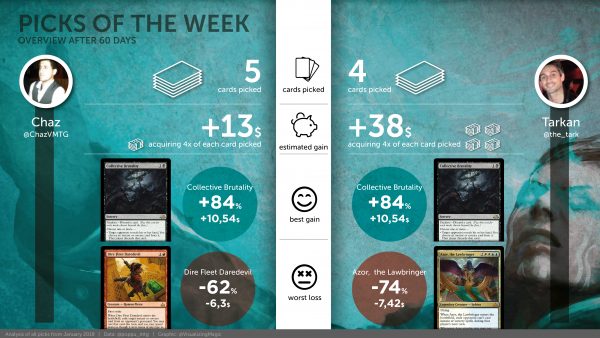