Below are the total set prices for all redeemable sets on MTGO. All prices are current as of April 9, 2018. The TCGplayer low and TCGplayer mid prices are the sum of each set's individual card prices on TCGplayer, either the low or mid price respectively.

Even in the late stages of a format there's still room for innovation. Although not taking the top spot, an innovative God-Pharoah's Gift deck made a splash at Grand Prix Seattle. The deck helped three players make the top eight and Combat Celebrant showed up as four of in each version, vaulting the card from the near bulk price of 0.5 tix last week to a peak of over 3 tix on Monday. 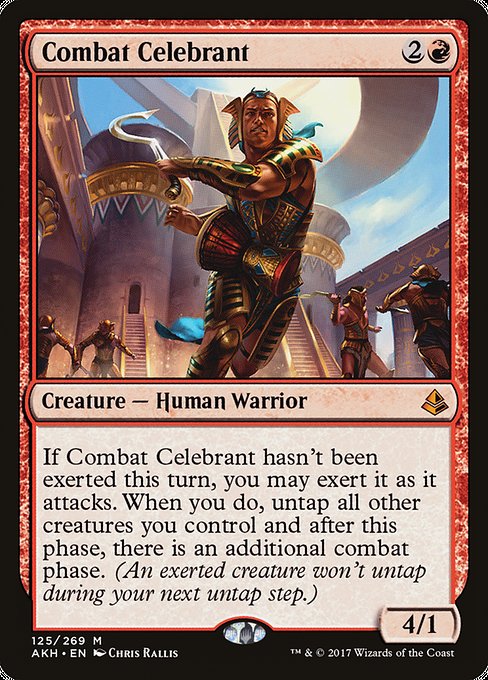 Bomat Courier was also all over the top eight decks with twenty-eight copies played, all of them in the main. This card has also peaked over 3 tix for the first time in its history. A colourless Raging Goblin with some upside is a bit of a surprise to see such widespread adoption but stranger things have happened.

With Dominaria (DOM) going to be released online next week, Standard is going to be ripe for brewing and fluctuating card values. One thing to keep in mind is the new way that sets were released starting with Rivals of Ixalan (RIX). If preview events return in a similar way for DOM, then there will be a day or two of Draft and Sealed leagues, followed by a break for the paper prerelease, with leagues restarting on the following Monday. It was the break for paper prereleases that shot card prices much higher, pushing a set of RIX from 160 tix to 260 tix in two days. Speculating on that type of price movement is clearly possible but I would hesitate to recommend it until the nature of DOM's release on MTGO is confirmed and only for the most attentive speculators. 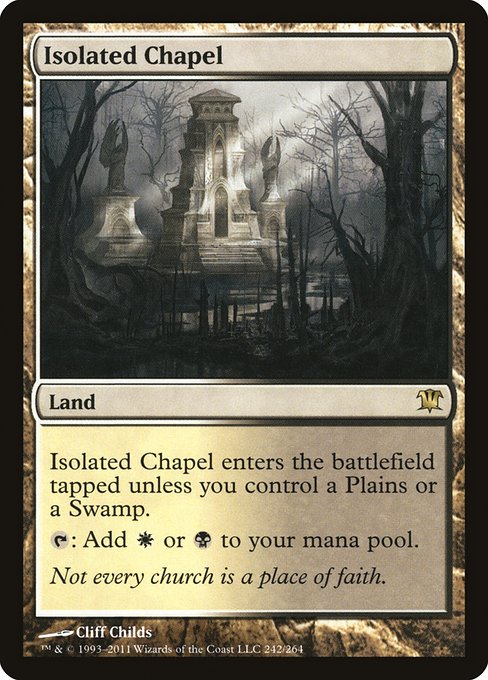 Outside of the wild west that could ensue from DOM's release, look for the Innistrad (ISD) opposing colour check lands to be legal in Standard starting next Wednesday after the downtime. From Wednesday into the weekend will be a great selling window for these as they become legal in Standard but still not widely available from the new set as limited events get started. After that, their prices will start to be determined less by scarcity and more by how they impact the Standard metagame.

Not to be outdone on the innovation front, an interesting take on Affinity has posted two perfect records in Modern leagues in the past week. Although it still features two of the Affinity lords in Steel Overseer and Arcbound Ravager, these are present because of the strong +1/+1 counter theme that the deck pushes. To wit, Hangarback Walker and Walking Ballista both show up as fours in the deck and even Nissa, Voice of Zendikar shows up as a two. 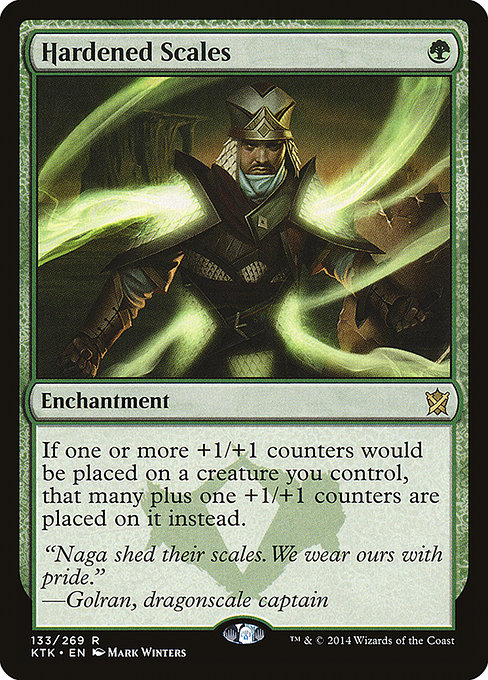 There's lots of redundancy in the deck with Welding Jar as a way to protect key artifacts and then Hardened Scales and Throne of Geth to amp up the distribution of counters. It's hard to say if this is a flash in the pan and is catching opponents by surprise or whether or not this is a real innovation in Modern. I think there's a ton of consistency here, even if the deck looks to be a bit wonky. This will be definitely one to keep an eye on and it looks like a lot of fun to boot!

A new preview card from DOM will no doubt be giving the Goblin tribe a boost in Modern and that card is Skirk Prospector. Although Goblin Warchief is a powerful reprint as well, the one drop could have a bigger impact as it opens up a new opportunity for a Goblins deck to expand into a combo space. A card that could be utilized along with Skirk Prospector is Fecundity. The prospector combined with this enchantment and Mogg War Marshall will net you three cards and one red mana. That's a good starting point and triggering Storm on Empty the Warrens could get a little nutty! 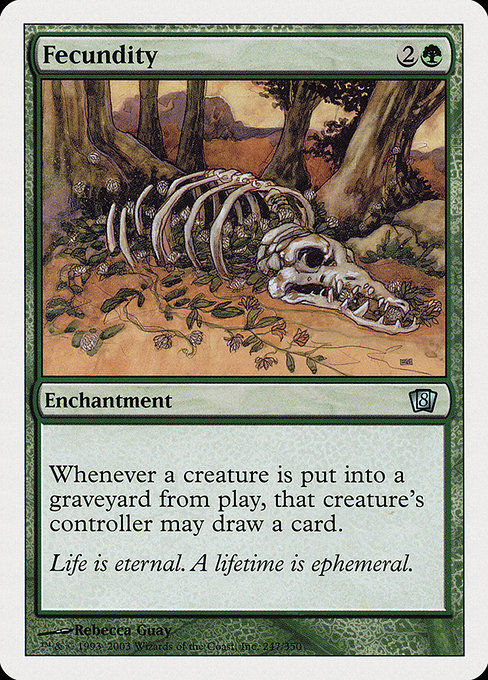 I think Fecundity is a great pick up below 0.5 tix. It's a card that has only been heavily drafted from Eighth Edition, the dawn of MTGO. Urza's Saga was never widely drafted as it was released on MTGO years after it was printed in paper. With a low supply, any sign of Modern potential will push this card over the 1 tix level and if a Goblins deck emerges that has combo potential featuring Fecundity then a price at the 5-tix level is certainly possible. I put one hundred copies into the portfolio this week and I anticipate adding more.

On the big picture front, Modern is going to suffer a short-term decline with the release of DOM, the most hyped Standard set in recent memory. I've been selling off most of my play sets in the past week, but I still have a few outstanding specs that I can be patient on. I won't be looking to redeploy tix into Modern in a substantial manner until the fall.

Elsewhere, prices on sets of Eldritch Moon (EMN) and Shadows Over Innistrad (SOI) rebounded this week. These are in the late stages of being available for redemption so be sure not to be caught with junk mythic rares in your binder in a few weeks. There will probably be one last buying spree as redeemers seek to extract the value from their online holdings so if you are holing more valuable cards too, look for an uptick in prices in the next ten days and don't be afraid to be a seller into strength.

For a complete look at my recent trades, please check out the portfolio. This week I picked out a couple of Pauper staples that saw a reprint in Masters 25 (A25), namely Exclude and Diabolic Edict. There's no short-term play here, but Pauper is a format on the rise and prices on these reprinted cards are cheap at the moment relative to their longer-term price levels. In the next year, I anticipate a return to the 1.0 to 1.5 tix range for Diabolic Edict and the 1.5 to 2.5 tix range for Exclude. 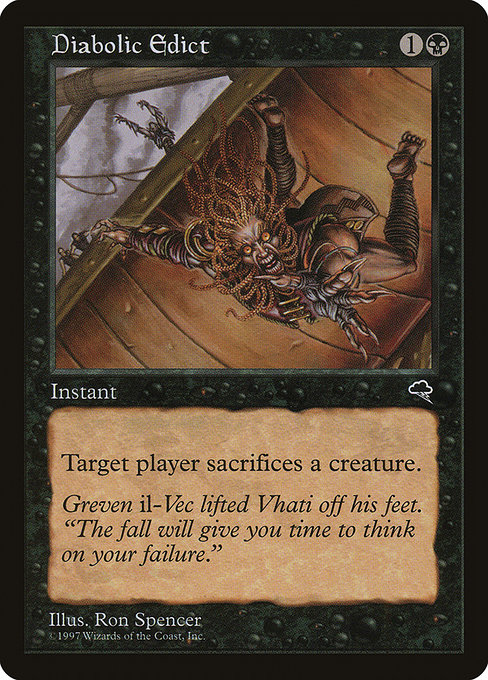 If you are thinking about trying out some long-term speculating or are thinking about getting into Pauper, it's a great time to be looking at cards from A25. Drafting of that set has concluded and so supply is drying up, but with DOM set to be released there won't be much interest in Pauper. Be sure to stick a playset or two into your collection this week.