Picture this: it’s Commander night at the LGS and you’re sitting down to play. There are some locals that you know quite well, and a player new to the store sits down. Now there’s a four-player Commander game starting up, and the new player looks at your group and says, “I have a bunch of proxies in here.” The group shrugs it off, but during the game you start to realize that the new person has almost every card in the deck proxied except for basic lands and a few cheap commons.

Proxy cards are a touchy subject. They are not welcome everywhere, though sometimes are accepted in casual play. On the other hand, many players simply do not have the finances to purchase expensive cards, and proxies give these players an outlet to at least play casually.

Commander is an interesting format, especially in regards to financial implications. Cards that otherwise would see slim-to-zero play in constructed formats are suddenly all-stars, such as Icy Manipulator, Wild Ricochet, and Chromatic Lantern, to name a few of many.

Chromatic Lantern is the perfect analysis for Commander’s financial influence. It's a card that once spiked to $5 and was considered overpriced in Standard—but today it has a pair of printings and an Invention Masterpiece, and is still valued at $14 on the lowest end. 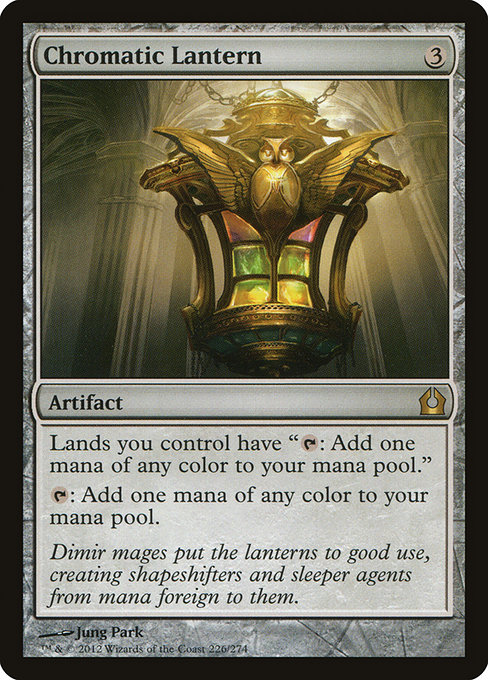 This is where proxies tend to muddle the game standards. If a player shows up with Chromatic Lantern as a proxy in a Commander deck, and the other players at the table paid their $14 for the card, it feels a bit unfair and can lead to some strained feelings about the game.

The local LGS for any Magic player has the potential to be a friendly community where different people from all walks of life can get together and play a fun card game, but at its core, every local LGS is still a business. In order for any player’s personal LGS to stick around, it has to make money through sales, as tournament entries alone will never be enough to keep a store afloat.

Owning and operating an LGS can be a pricey proposition. The overhead for simply having a brick-and-mortar is always more than expected, between the rent, labor hours, expenses for paper and printing ink, cleaning supplies, aesthetics, and dozens of other small fees and expenses too numerous to name. Stores are technically a luxury retail business, since they sell entertainment and not a vital living commodity.

The economy makes purchasing luxury items difficult, since most players have their own expenses to some degree, and many players simply cannot afford to pay large sums of money on pieces of cardboard with pictures on them. Magic is incredibly fun and addicting, but the ends do not always justify the means. However, if a player wants their LGS to succeed, they need to be willing to sacrifice a bit of their money to support their local store and community.

Proxies can be exceptionally detrimental to a store’s revenue. There are plenty of situations where players are going to proxy up individual cards—and sometimes entire decks—depending on the community members and the level of competitive play. There is a wide range of possibilities here, from players who play competitive tournaments on a consistent basis testing out cards before making an intended purchase (which is usually fine for stores), to players who play casual formats and Commander formats who simply do not want to spring for the extra dollars (which is miserable for stores).

While proxies are oftentimes the bane of an LGS, there are ways that the stores can work the idea of a proxy to their advantage.

The most common thing that I have seen is the idea of a “proxy tournament,” usually pertaining to a specific format. In the Chicagoland area, there were a few stores that would run Legacy tournaments on a frequent basis, since Chicagoland has some rabid Legacy fans in the area.

With this in mind, my personal LGS, as well as a few other stores, have made attempts to help get Legacy events fired for that passionate group of players. The downside is that many Magic players simply cannot afford Legacy no matter how much of their own money they are willing to spend on the game, because Legacy is insanely expensive across the board, with many staple decks costing several thousand dollars apiece.

Proxies are a way to circumvent the large entry cost into the Legacy format, and give players an opportunity to experience a format that's a great deal of fun and that allows for many unique interactions other formats do not. The “20 proxy” rule was in effect for a few Chicagoland events for a number of years, giving players the incentive to spend some amount of money towards a Legacy deck (benefiting stores) while not having to pay hundreds, or even thousands, of dollars on the few individual cards that are necessary for the decks to function.

The most common nonland proxy cards that I would see running around these Legacy decks were The Tabernacle at Pendrell Vale, which costs an absurd $1600 at the moment; Imperial Recruiter, which just got a reprint but was previously well over $200 apiece, with a requirement of four copies in any deck it was played in; Lion's Eye Diamond, which moves around in price between $80 and $120, and can be hard to find from limited printings; and Candelabra of Tawnos, which is still in the $400-$500 range despite only truly seeing play as a one- or two-of in the Cloudpost and High Tide decks.

Almost every dual land was a frequent proxy, because Volcanic Island and Underground Sea can fluctuate into the $300 apiece range, Tropical Island is never far behind, and even the cheapest dual lands are near $100 if not above almost all the time.

Even the budget decks in Legacy often required some proxies for players who had a hard time finding copies of cards that they could afford. Fetchlands like Misty Rainforest and Scalding Tarn were out of stock all over the place before the Modern Masters 2017 reprints. The proxy rule allowed for some solid flexibility and got events running at the LGS, bringing people into the store and potentially getting some revenue in the process.

Magic Online has a Holiday Cube that is essentially a drafted Vintage Cube, with some of the strongest cards in Magic history available for the event. If you have never tried it, it is incredibly fun playing with the all-time greatest cards.

My LGS did something really cool back in 2012: they had a copy of the entire Holiday Cube proxy-printed onto card stock and double-sleeved into high-quality sleeves to protect it. For a few months out of the year, an event was run to give paper Magic players the opportunity to try it. The cost of having the proxy Holiday Cube made was barely offset by tournament entries over time, but it was a really cool concept.

I would highly encourage any other LGS to attempt using proxies to their advantage. There are many ways to work with proxy cards to help expose loyal community members to potential decks, and as a result, those community members have the potential to purchase the actual copies of the cards if they enjoy the cards enough.

The Verdict on Proxies

Despite being a competitive player for several years, I am not the biggest fan of proxies as an overall whole from my time running an LGS. This does not mean that proxies cannot be utilized in positive ways, as I’ve mentioned with the proxy Holiday Cube and the proxy tournaments.

My advice as both an owner and a Magic player to anyone who uses proxies is pretty simple: please do not abuse the proxy concept. By all means, show up and play with people in your community! Just be careful with the concept. Try not to show up to a Commander pod with a full-proxy deck that is far overpowered for the pod you are playing with, because it will simply irritate the other players and can cause some discord.

What do you think of proxies? Do you use proxies in any format? Why do you use them? Are they generally accepted in your community? Let me know in the comments!

4 thoughts on “Insider: The Pluses and Minuses of Proxies”