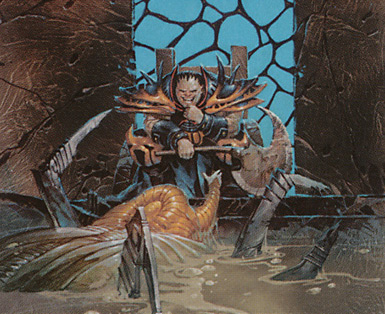 We've got all of Battlebond spoiled now and it looks like yet another home-run for Commander players. Battlebond follows a similar route as Conspiracy and Conspiracy: Take the Crown in that it's a standalone product that is not Standard nor Modern legal. With both Conspiracy sets we got some great Commander reprints, however, nowhere near as many as we are getting with Battlebond.

That being the case, we want to review Battlebond's reprints and determine our speculation strategy. Before we do that, we should look at the Conspiracy reprint prices to get an idea of what kind of price drop they saw (before rebounding, if they in fact rebounded).

However, there is one very important aspect related to both Conspiracy sets that I don't feel will be applicable with Battlebond. Both Conspiracy sets were designed specifically for a draft environment (and some rares and uncommons are unplayable in regular constructed play, including in Commander). The sets were initially drafted heavily, and a large number of cards entered the supply within the first two months or so of the sets' release. However, interest seemed to quickly ebb, and the flood of copies quickly became a trickle.

Looking over the Battlebond spoilers, it's pretty clear that while many of the cards are definitely designed for Two-Headed Giant Sealed, they still work in a single-player deck. There are also a lot more Commander reprints. I expect this product will prove quite popular and that we will see a lot more copies of cards enter the supply. This especially thanks to the new dual lands, which initially pre-sold for around $10 each and are still sitting in the $5+ range.

If this proves true then the price floor will take longer to reach than with the Conspiracy sets, so we will likely want to hold off on aggressively picking up any targets. Without any further ado, let's look at our Conspiracy Commander reprints and try to get a feel for how much the prices tend to drop from initial release.

With the first Conspiracy we got a few good targets. 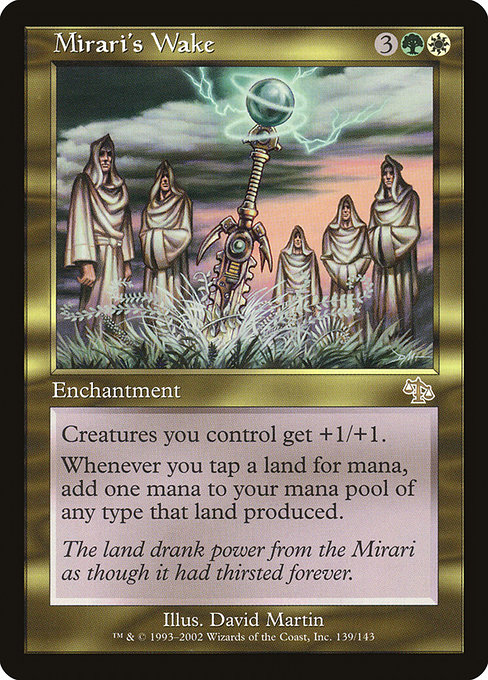 Mirari's Wake initially sold for around $10 and quickly dropped to a floor of $6.50. It slowly climbed back, rising all the way up to $15 before the Commander reprint dropped it back down. This shows around a 30% drop from the initial price for our first mythic reprint. 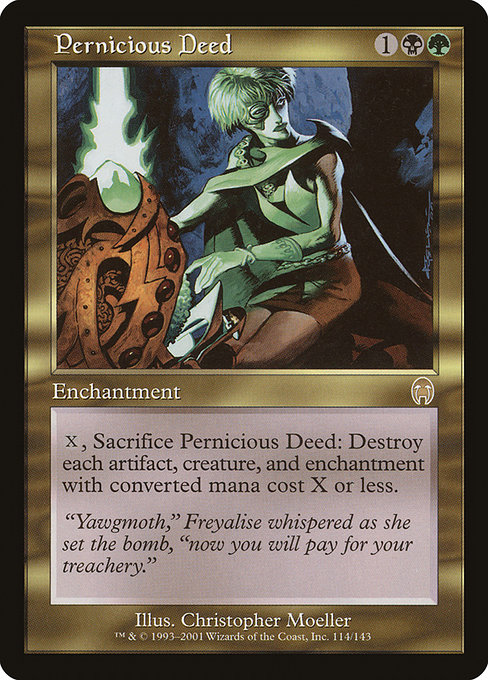 Pernicious Deed started at around $15 before quickly dropping down to $7. It continued to fall until it hit around $5, where it has plateaued (though the reprint as a rare in Masters 25 likely killed any potential gains this card may have had). Here we see a drop of 66% for our second mythic reprint. 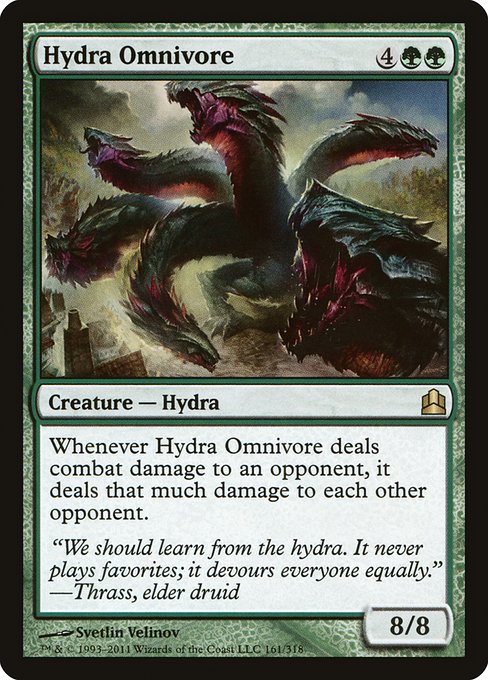 The original version of Hydra Omnivore hit $12+ for a couple months, but the announcement of its inclusion in Conspiracy tanked the price. While the original Conspiracy version was $7, it quickly dropped to $2.50, and has slowly risen back to $3.50 now. We see an 80% drop for our third mythic reprint.

Average Drop: 58.6%. One can argue that the Hydra Omnivore demand prior to the reprint was rather limited, and that its drop skewed our percentage upward a fair amount. 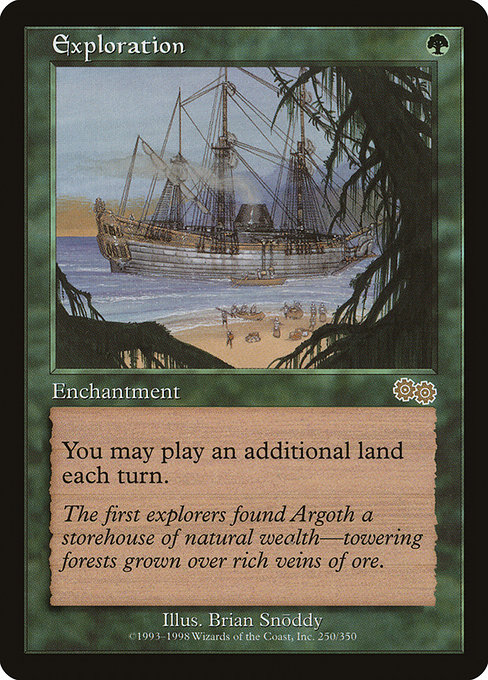 Exploration started out around $19.5 and dropped all the way down to $7. It has since rebounded back to $21 (I definitely advocated for picking them up at that price way back in 2015, so I hope you did). So for our first rare reprint we have an initial drop of 64% (though an eventual gain of 8%). 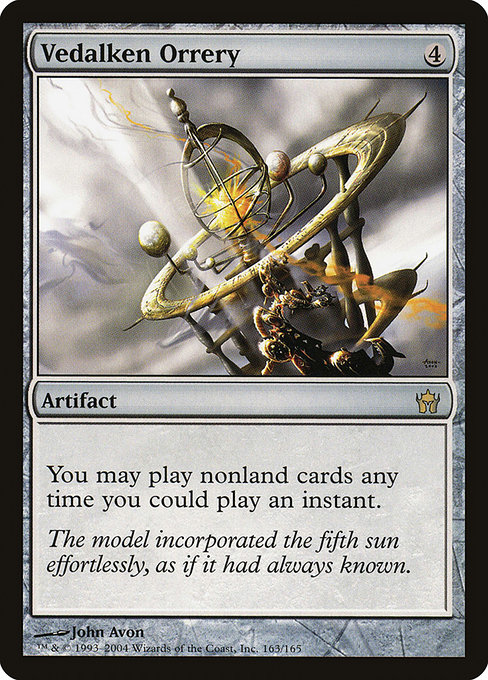 Similar to Exploration, Orrery started out at a decent price of $5.5 and quickly dropped to $1.50, where it sat for several months before slowly gaining. Now it's sitting at $20.25. Thus it had an initial drop of 73% before eventually gaining 268%. 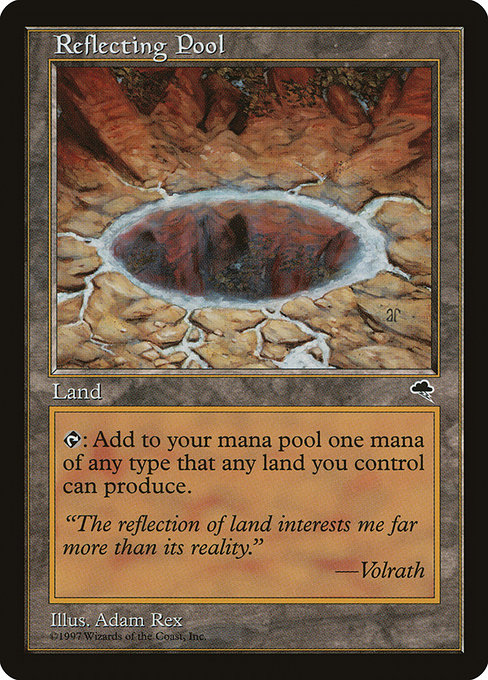 Reflecting Pool started out around $10 before plummeting to $4.50 (though it actually started gaining back relatively quickly), and is currently sitting at $12. So it had an initial drop of 55% before eventually gaining 10%. 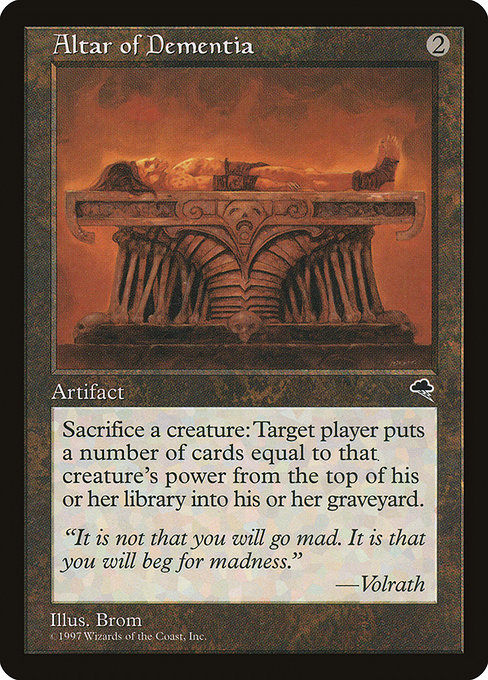 Altar of Dementia started out around $4 before plummeting down to $0.86 (almost bulk rare status). It has since rebounded nicely to right back around $4. It had an initial drop of 78.5% before rebounding back to its initial price (thus gaining 0%). 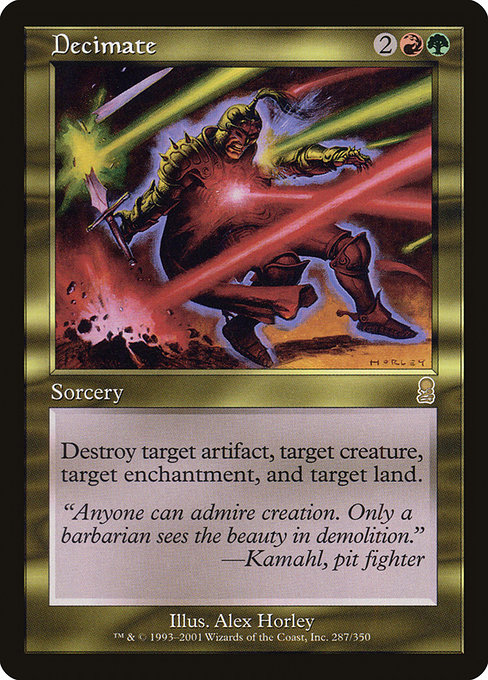 Average Drop: 70.6%. In all instances of the rares we have a pretty large initial drop from the initial release price (which, to be fair, we see with almost every card from every set, save the sleepers). 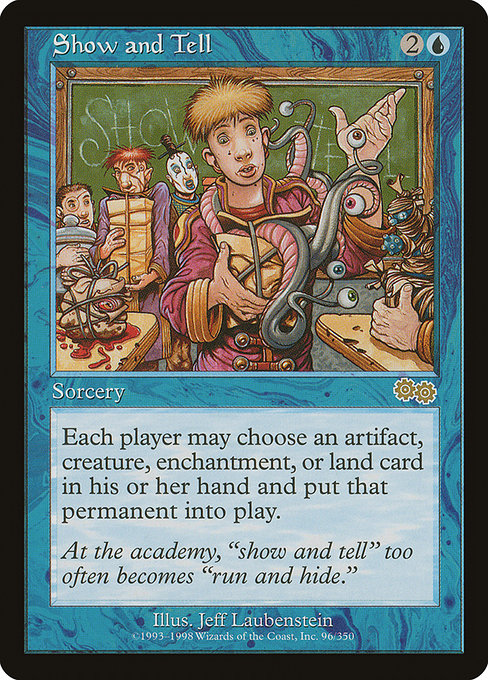 Though not really much of a Commander card, Show and Tell was a significant Legacy reprint so we'll include it here for posterity's sake. It started out at $30 and quickly dropped to around $15 before slowly falling down to around $14.25. This it had a drop of 52.5%. 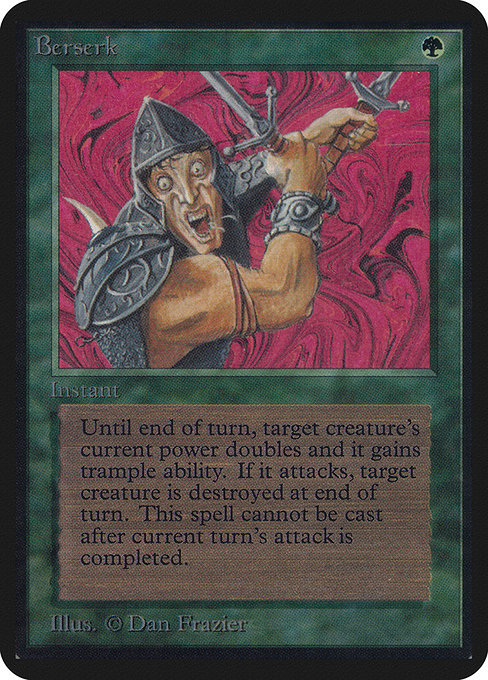 Another card that likely draws more demand from Legacy (due to the Infect deck), Berserk still does see some play in Commander decks, so again we'll include it here. Its initial price was $34 before dropping to as low as $10—ish—thus having a significant drop of 70.5%. 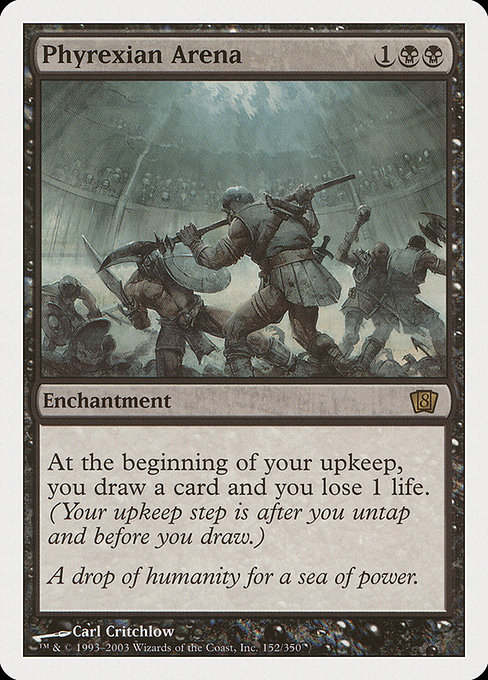 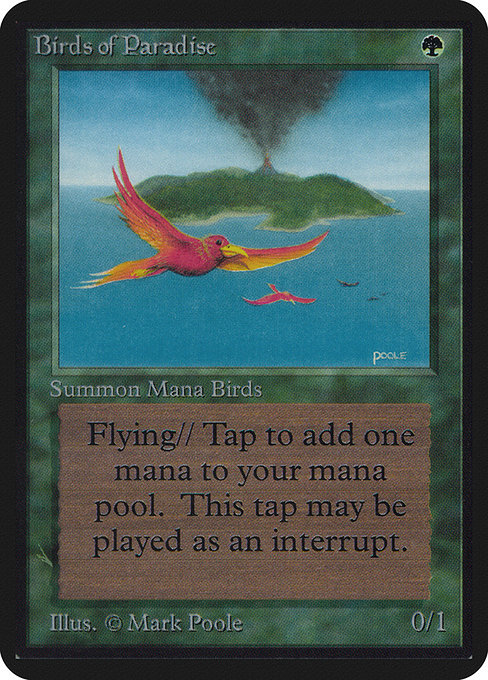 Birds of Paradise started out around $5.70 before quickly dropping to $4 and then beginning its rise to the current price of $7.12. Thus an initial drop of 29.8% followed with a gradual gain of 24.9%. 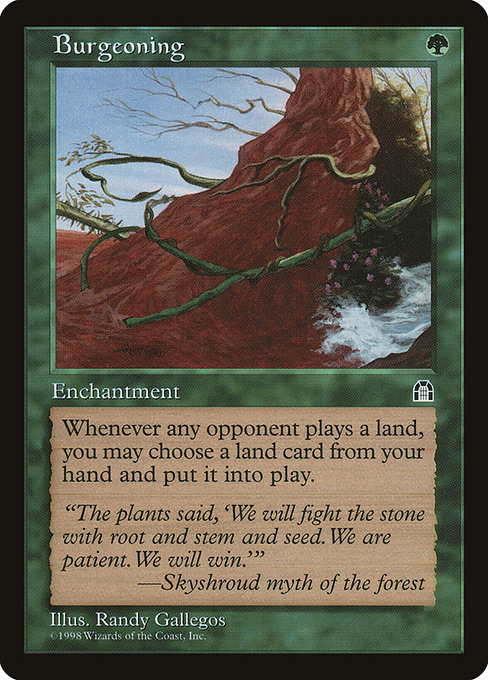 Burgeoning started out around $10 before quickly dropping to $3 and then beginning its rise to the current $5.8. Thus an initial drop of 70% followed by gradual gains (though a reprint in the Commander 2016 deck likely hurt this spec a fair bit). I definitely pushed this card back when it was around $3, and tried to pick up a fair number of copies myself.

Inquisition of Kozilek quickly plummeted from $10 down to $6, then regained most of its loses and jumped back to $9.42. Subsequent successive reprints (at uncommon no less) have crushed the price back down to $4.25, though it has made some modest gains back to $5. So here we have an initial loss of 40%, regaining almost all losses before another loss back down by 58.5%. 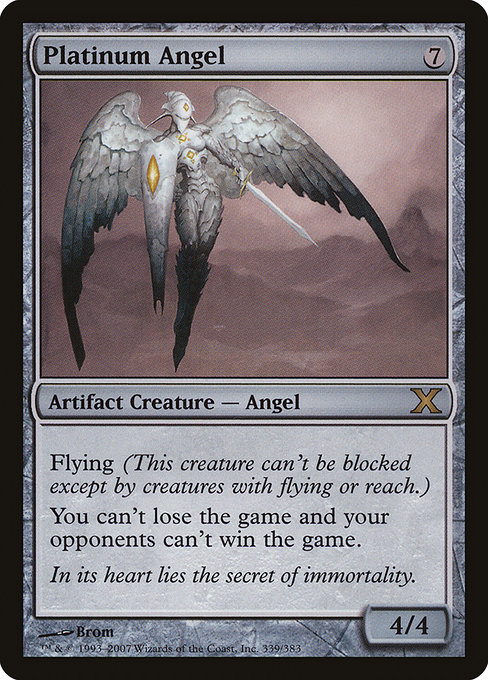 Similar to Burgeoning above, Platinum Angel started out around $7, quickly dropped in half to $3.50, and has made modest gains since (though a reprint in From the Vault: Angels definitely didn't help). So again we see an initial drop of 50% followed by its most recent drop of only 40%.

Between the two sets, we have an average mythic rare drop from initial pre-sell prices of 60%, and an average rare drop of 58.6%. So both ended up being around 60%. Knowing this, we can set some target price pickups for our Battlebond specs.

The last column in the table below is the key one here. I would have set different pickup percents if the rare vs. mythic rare drop rates were different enough to be statistically significant, but they were both at or close enough to 60% that it seemed like a good ball-park.

I do think it's very important to keep in mind that a couple of these reprints (namely Doubling Season and Seedborn Muse) are highly desirable Commander staples, so they are likely not going to drop by the full 60%. However I would point out that when Doubling Season was reprinted in Modern Masters it actually did sell for around $14-$15 for a solid six months, so it's not like the price dropped too suddenly and the market quickly rebounded.

We also can't be certain that none of these will be reprinted again shortly (as we saw with Inquisition of Kozilek), which can crush the chances of significant gains after a bottoming out. So I wouldn't go too deep on any non-Reserved List cards when it comes to speculating, even when they seem to have a lot of upside potential.

However, I think it's definitely worth the risk to pick up a couple playsets of most of these, as the gains from the non-reprinted ones will likely beat the losses from any that end up reprinted again soon. Though again, I believe that this set will be opened a fair bit more than either Conspiracy set thanks largely to the fact that it's designed with both Constructed and Limited formats in mind.