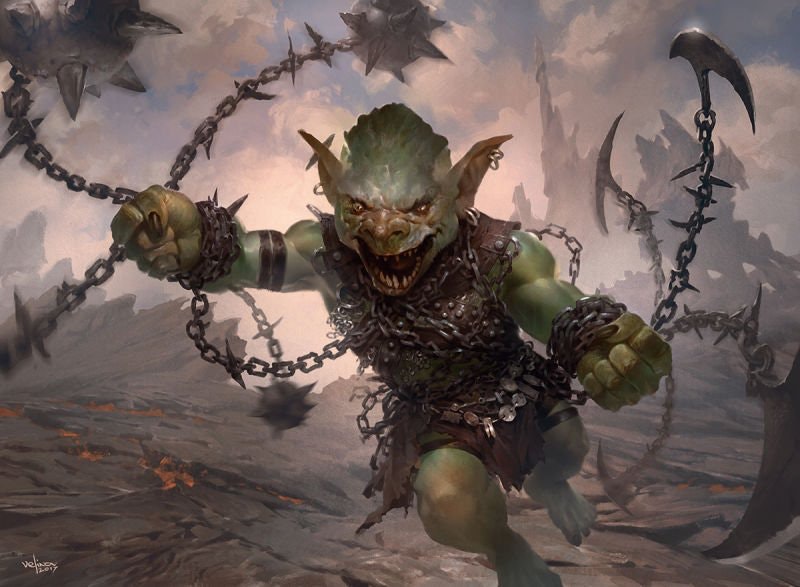 This week we are going to do some early speculation on Pro Tour Dominaria. After many weeks of Standard action, everyone knows the top decks in the format by now. The most recent Grand Prix was dominated by BR Vehicles—no doubt a deck that will be a big part of the Pro Tour.

Having seen the power level of the red deck, I predict one of two things for the coming PT. Either it's going to be full of aggro decks like Pro Tour Hour of Devastation (the Top 8 consisted of 6 Ramunap Red variants, 1 BG Midrange, and 1 Zombies deck), or Shota Yasooka will come out with some special control brew and beat everybody.

Best Card in the Format

Karn, Scion of Urza is definitely the best card in the format. It's powerful, and can be played by any deck in the format. Its price did stabilize around 40 tickets after a few weeks, and this is definitely not the card you guys want to stock up before the Pro Tour. The card may still increase beyond 40, but it's too risky to pick up copies right now.

Goblin Chainwhirler is a card that every red deck needs. Its enter-the-battlefield effect is great for an aggro deck that wants to keep attacking, as it reduces the ability to block (especially against one-toughness creatures).

From past experience, we know that a four-of staple in an aggro deck will increase in price if the deck makes Top 8 of the PT. This happened to Earthshaker Khenra at PT HOU (it increased from 2.8 tickets to 6 tickets in a week). Chainwhirler has room to grow, and I like it as a pre-PT spec.

Next up is the Mono-Green Stompy deck, which plays a bunch of cheap, huge creatures like Rhonas the Indomitable, Steel Leaf Champion, and Ghalta, Primal Hunger. I think this deck can potentially become very broken with Ghalta. We can compare this to the Metalwork Colossus deck from a few seasons ago, which caught lots of players unprepared.

Both can decks can cast a huge creature for very cheap. The difference between Ghalta and Colossus is that the Mono-Green deck plays creatures that can start attacking from turn one, while the Colossus deck played a bunch of artifacts that didn't do much on their own. I think Ghalta will be played at the PT, and I recommend buying some playsets.

History of Benalia is one of the highest-rated mythics in Dominaria. At 1WW, the ability to create 2/2 tokens and pump them after two turns is pretty strong on its own. I think this card is currently underplayed, and I'm expecting some kind of white aggro deck to come out to compete with RB Aggro.

Currently this card is played in a couple of white control variants, WB Vehicles, and the green-white Sram's Expertise tokens deck (which we'll cover shortly).

The price hasn't gone very high because online players always pick the best deck to play. If you look at paper prices, however, it has reached the 20-ticket mark, but it's still 10 tickets on MTGO. At mythic rare, the supply is low enough that when and if the card shows a sign of making Top 8 during the first two days of the PT, there's a high chance that it will start increasing in price online.

There's a GW Tokens deck running around online these days with a lot of potential. The deck can go wide really fast with cards like Sram's Expertise, History of Benalia and Legion's Landing // Adanto, the First Fort, and it also has protection against Goblin Chainwhirler with Benalish Marshal.

GW Tokens cards have plenty of room for price increases, as the entire deck is super cheap right now (below 80 tickets). Let's look at some of my picks from the deck:

Sram's Expertise is one of the core component of the GW Tokens deck. The ability to cast a three-CMC spell for free on turn four is pretty powerful, unless you're playing against a blue deck keeping counterspells up. But with the current metagame full of aggressive decks, I think qualified players will prefer not to bring control decks to the PT unless there's a really good build. Thus, I think the white Expertise has some potential, and I recommend buying some playsets just in case.

For every PT, there are usually certain lands that will increase in price. Every deck needs lands, right? Scattered Groves is my pick this time. It just recently decreased in price and it has a cyclical trend, which means that even if it doesn't perform well at the PT, there's still opportunity after the event. I would suggest buying playsets of the card for investment.

Lyra Dawnbringer is played in the sideboard of current WU Control decks. For the control decks, in order to beat super aggressive decks, they need to survive until they resolve Lyra. That is too slow in my opinion—and Lyra is already expensive—so I would say this is not what you want to buy under this category.

Aethersphere Harvester, on the other hand, has a high toughness and lifelink. I predict that this will be the major anti-aggro card at the coming PT. The aggro decks will play this in the sideboard, while other midrange decks will probably play it mainboard. Looking at the graph, the price is going downhill at the moment, which is the best timing for us to grab some copies as PT specs.

Is the ninth Mox the real deal? Players have been playing around with this card, but nobody's had much success yet. However, in my opinion, yes, this card will increase in price at one point in the future.

It might not be playable in Standard, as there aren't a ton of cheap legendary creatures. The point of playing moxen is to cast a bunch of stuff early—if you can't turn it on early, it doesn't accomplish much.

However, in older formats, turn one or two acceleration is possible with Mox Amber, as there are plenty of one- and two-mana legendaries around. It's just that players have not found the best build. I would suggest buying Mox Amber for investment.