Below are the total set prices for all redeemable sets on MTGO. All prices are current as of May 28, 2018. The TCGplayer market and TCGplayer mid prices are the sum of each set's individual card prices on TCGplayer, either the market price or mid price respectively.

All eyes will be on Standard this weekend as Pro Tour Dominaria (DAR) kicks off and the pros take their best crack at the new Standard format. I have no particular edge in speculating on the Pro Tour metagame as my understanding of the format is limited so I have no hot picks. I would say that any price spikes that are triggered this weekend in any Standard card are worth selling into, particularly if they are from the Kaladesh (KLD) and Amonkhet (AKH) blocks. These sets have a short time left in Standard and the relentless price decline associated with rotation is underway.

As for sets sticking around in Standard, Ixalan (XLN) is moving sideways so the post drafting price peak might have already occurred. Have a look at the chart below which tracks the prices of recent large sets in and around the end of drafting. 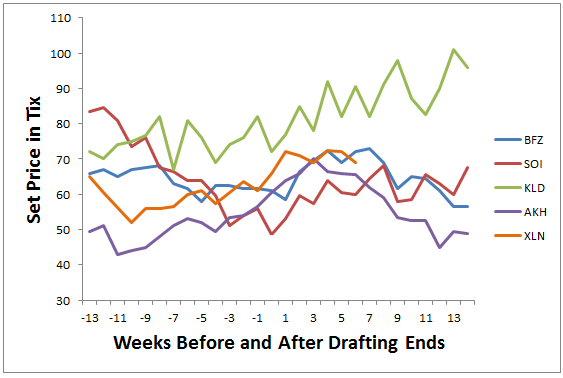 I was buying sets of XLN prior to the end of drafting at an average buy price of a little under 60 tix. With only a few sets left to sell, the average sell price is almost 68.5 tix, yielding over 8 tix in profit per set or close to fifteen percent. Current prices are down a little, and with another promised round of redemption set yet to be printed, I think another decent selling opportunity is not far away. These results are right in line with expectations. Sometimes you'll get a big win, especially in the fall with rotation, but often buying and selling full sets is closer to a ten to twenty percent gain, like with XLN.

The outlook for Rivals of Ixalan (RIX) is a little better as it still is in an uptrend. Having a look at a similar chart for recent small sets, Oath of the Gatewatch (OGW), Eldritch Moon (EMN) and Aether Revolt (AER) all peaked about eight weeks after drafting ended. Hour of Devastation (HOU) was the lone exception, peaking three weeks after drafting ended. We are into week six for RIX so between the historical evidence, the pending Pro Tour and the current uptrend, there's no need to be rushing to sell these 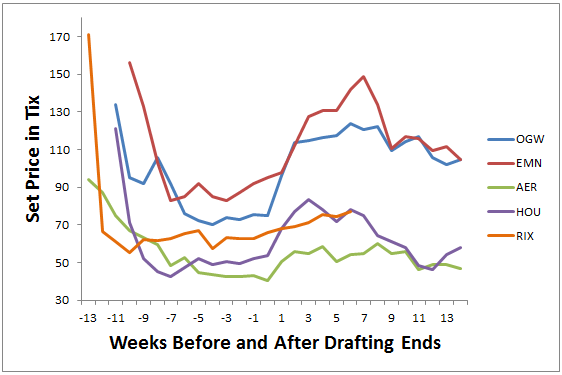 For RIX, the average buy price is 63.5 tix per set, while the average sell price is close to 73 tix with about a quarter of the sets sold. Profit is about 9 tix per set or fourteen percent. I am looking for a set of RIX to hit 80 to 90 tix in the next month which would yield closer to 15 tix profit per set or over twenty percent.

There is some life coming back into the Modern market. The trough in prices triggered by the shift in demand to DAR and Standard is receding in the rearview mirror and a few staples are starting to see higher prices. Kolaghan's Command hit 15 tix in early May but is now back to 20 tix. Collective Brutality and Scalding Tarn have both seen a similar 5 tix price increase in the past month.

While the focus will still be on Standard with the Pro Tour stopping in Richmond, Virginia this weekend, the seeds of another strong run for Modern prices are being planted. Selectively targeting Modern staples is defensible at this time. Look for cards that see play across multiple decks, including sideboards, and look for cards that are much cheaper than they were a month ago. Recent steep drops in price are a result of players selling their cards and once they decide to buy back in then prices will really take off.

A draft set of two RIX boosters and one XLN booster has risen to a price of 5.3 tix this week. With the expected value of DAR boosters declining, players seeking good bang for their buck are gravitating towards XLN block draft. The selling window for these is not yet open but it's getting close as we head into June. Once Core Set 2019 releases in July, XLN block will leave the draft queues and the price of RIX and XLN boosters will only be determined by their expected value.

For a complete look at my recent trades, please check out the portfolio. Surgical Extraction is a great Modern staple to keep an eye on. It's a very mana efficient sideboard answer, it's available to all colours, and there are not a ton of copies floating around as it's from a third set with a Modern Masters 2015 (MM2) reprint a few years ago. Have a look at the price chart below, courtesy of Goatbots. 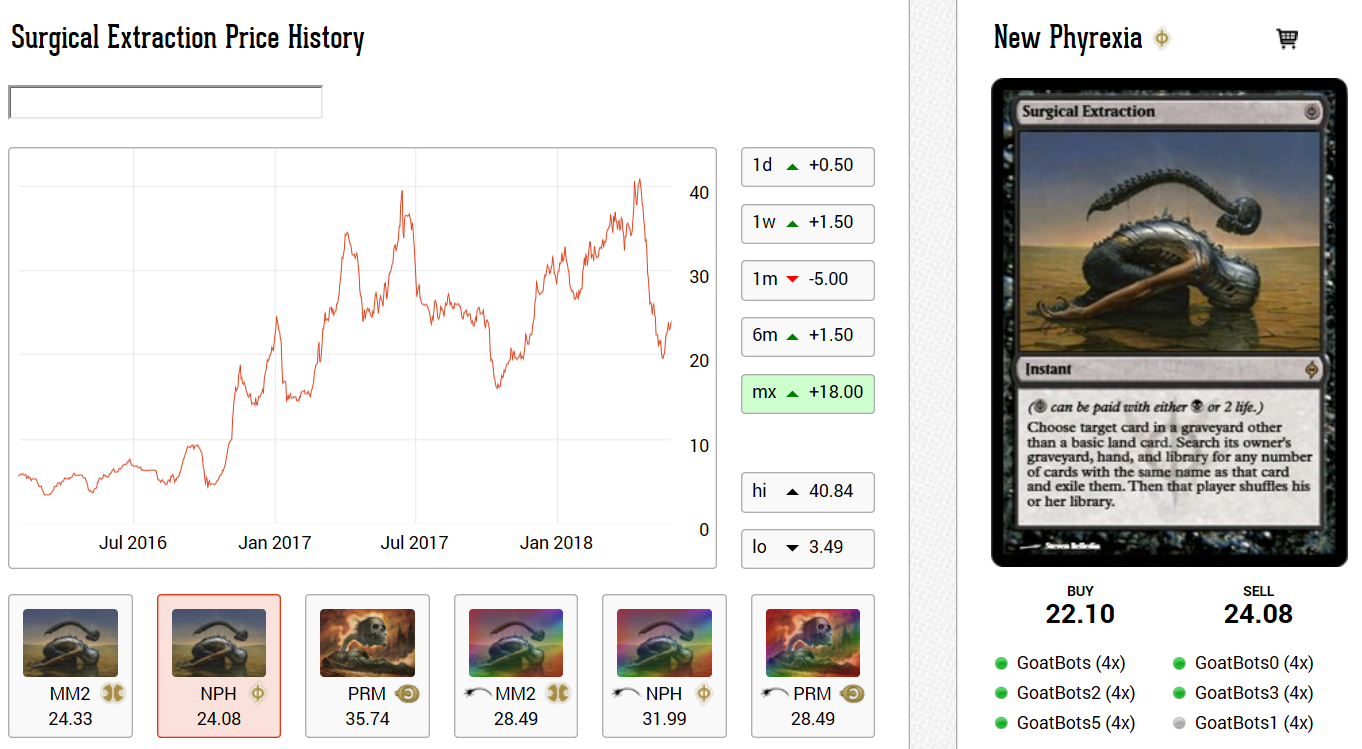 The all-time high of 40 tix was reached in April but its average range has been in the 25 to 30 tix range since early 2017. Once it dipped into the low 20 tix range it was starting to look like an attractive rebound candidate. I scoured the classifieds for the cheapest copies I could find, and I managed to grab a few play sets at 22.5 tix per copy.

This was not a full position that I acquired as I was concerned that there was potential for another leg down, even though it had come down almost fifty percent from its high. For this reason, I resolved to buy a few playsets and then wait to see what would happen in the market.

So far, the early returns are good as the price has hit 24 tix and there is strength in other Modern staples. Expanding the position by looking for more playsets at a low price would be a reasonable strategy to ratchet up exposure to this card.