Below are the total set prices for all redeemable sets on MTGO. All prices are current as of June 5, 2018. The TCGplayer market and TCGplayer mid prices are the sum of each set's individual card prices on TCGplayer, either the market price or mid price respectively.

Each set except for Ixalan (XLN) was down this week in the wake of the Pro Tour. This is a normal market reaction as players sell their pet cards and their decks coalesce around the metagame established by the pros. If you haven't already, check out the top decks here. I don't speculate much on the Standard pro tours anymore, but if you are holding cards that have benefited from the pro metagame, it's time to be a seller.

Goblin Chainwhirler is well represented in Charlotte and this is having a chilling effect on the price of former top cards in Standard. Legion's Landing // Adanto, the First Fort was 3.5 tix when Dominaria (DAR) was released and it now sits at a little over 1 tix. Have a look at the chart, courtesy of MTGGoldfish.

This is exactly the kind of card that will benefit when Standard rotates. Although Goblin Chainwhirler will be in Standard as long as Legion's Landing // Adanto, the First Fort, Hazoret, the Fervent and Chandra, Torch of Defiance will both be on their way out in October. There's also the matter of Core Set 2019 (M19) that releases in early July. The chances that red continues to dominate all summer and into the fall are slim so looking for cards that have bounce-back potential, such as Legion's Landing // Adanto, the First Fort, is a great idea. I don't think the current downtrend is over though, and a price in the 0.5 to 0.7 tix range is in view

The release of M19 will shake up the MTGO economy beyond just what it adds to the Standard metagame. That's when DAR will stop being opened heavily in Draft, which will signal a buying opportunity for that set. M19 will also herald the end of XLN block draft queues, which means XLN and Rivals of Ixalan (RIX) boosters will be valued solely on the expected value of their contents.

The next month is the time for speculators to be building up their stock of tix. Sell underperforming positions, particularly Standard ones. There's a countdown on with the summer lull on the way and fall rotation in the medium term. Holding onto cards from Kaladesh (KLD) block and Amonkhet (AKH) block and hoping for a price rebound is not a good strategy.

One strategy that has performed very well is DAR foil mythic rares. At this moment it looks like the price of full foil set has peaked at around 350 tix. On top of that, the sum of the buy prices for foil mythic rares makes up 82 percent of that full set price. This is a good sell signal as RIX peaked at 83 percent while XLN peaked a little lower at 77 percent. You can see how these metrics have evolved for DAR in the chart below. Note that the left axis is in tix and corresponds to the blue and red lines, while the right axis is in percent and corresponds to the green line. 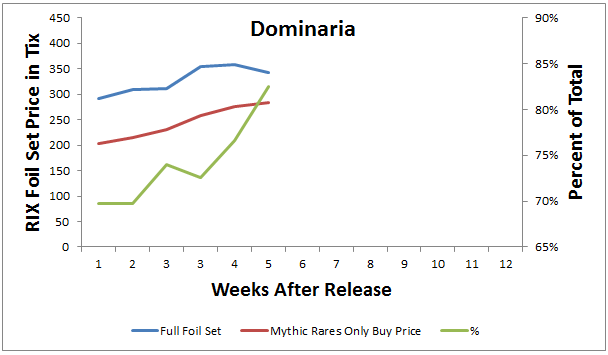 Further upside on foil mythic rares is difficult to see at these levels. DAR is the most expensive foil set in recent memory; at a certain point, it becomes difficult for any set to rise in price further as it becomes more and more economical to just open product. The link to the paper market through redemption helps to establish this cap, even when there's no positive expected value in cracking boosters on MTGO.

The foil mythic rare strategy has worked very well for DAR. Prices have been rising since the set was released and value has been flowing to foil mythic rares. The tricky part of employing the strategy this time around was the fact that prices for singles were high relative to foil mythic rares from past sets. Those who gritted their teeth and plunked down their tix have been rewarded handsomely. For the portfolio, on paper returns are on the order of 80 tix per set or forty percent.

For players and speculators, this is a great strategy that I expect will continue to perform with the next chance at employing it coming in July with M19. The best buying window on foil mythic rares has been shrinking so be sure to have your tix ready to employ this strategy as soon as M19 is released.

Modern prices were not as strong this week, with many cards giving back their recent gains. It's very important to realize we are in a period that is different from the winter when grassroots demand is strong and prices have a strong upward bias. There's just going to be less broad bases support on all Modern cards and speculators will have to plan accordingly.

We have to be cautious in deploying tix over the summer, as the best opportunities are always available in September and into the fall. We don't want to be heading into October needing to raise tix; we want to be ready to be liquid and ready to buy! This can be hard and a good test of patience as having tix in your account doesn't give you anything. The important thing to realize is that having tix gives you options. You can choose to buy whatever you like. Once your tix are running low, your options are getting narrower as you become tix-constrained.

What this all means is that we have a few weeks prior to the release of M19 to consider what to be selling. That's not much time in advance of the next big draw on market liquidity. Players will be interested in M19 and will be selling their cards in order to draft. Karn Liberated is an example of a card that has seen a recent dip and a rebound and is getting ripe for selling, have a look at the chart, again courtesy of MTGGoldfish.

For a complete look at my recent trades, please check out the portfolio. I took the opportunity recently to sell down my stock of Hazoret the Fervent after it bounced back up into the 13- to 14-tix range. Just to reiterate, it's time to be selling cards, especially those cards that are set to rotate out of Standard in the fall. This wasn't a great spec, but they can't all be winners. Holding on too long will just yield to bigger losses as the market grinds forward into the summer.