Hello, Insiders, and welcome to the June 2018 Edition of the QS Cast Tracker Infographics! Every month we take a look at how Chaz's and Tarkan's picks have fared since they mentioned them on a podcast episode. For convenience, we only keep track of six months worth of picks and check the price changes after 30, 60 and 90 days. Today's column will look at all cards selected since the January 4t 2018, episode.

Without further ado, here are the Infographics, as always courtesy of our very own Diego Fumagalli (Visualizing Magic): 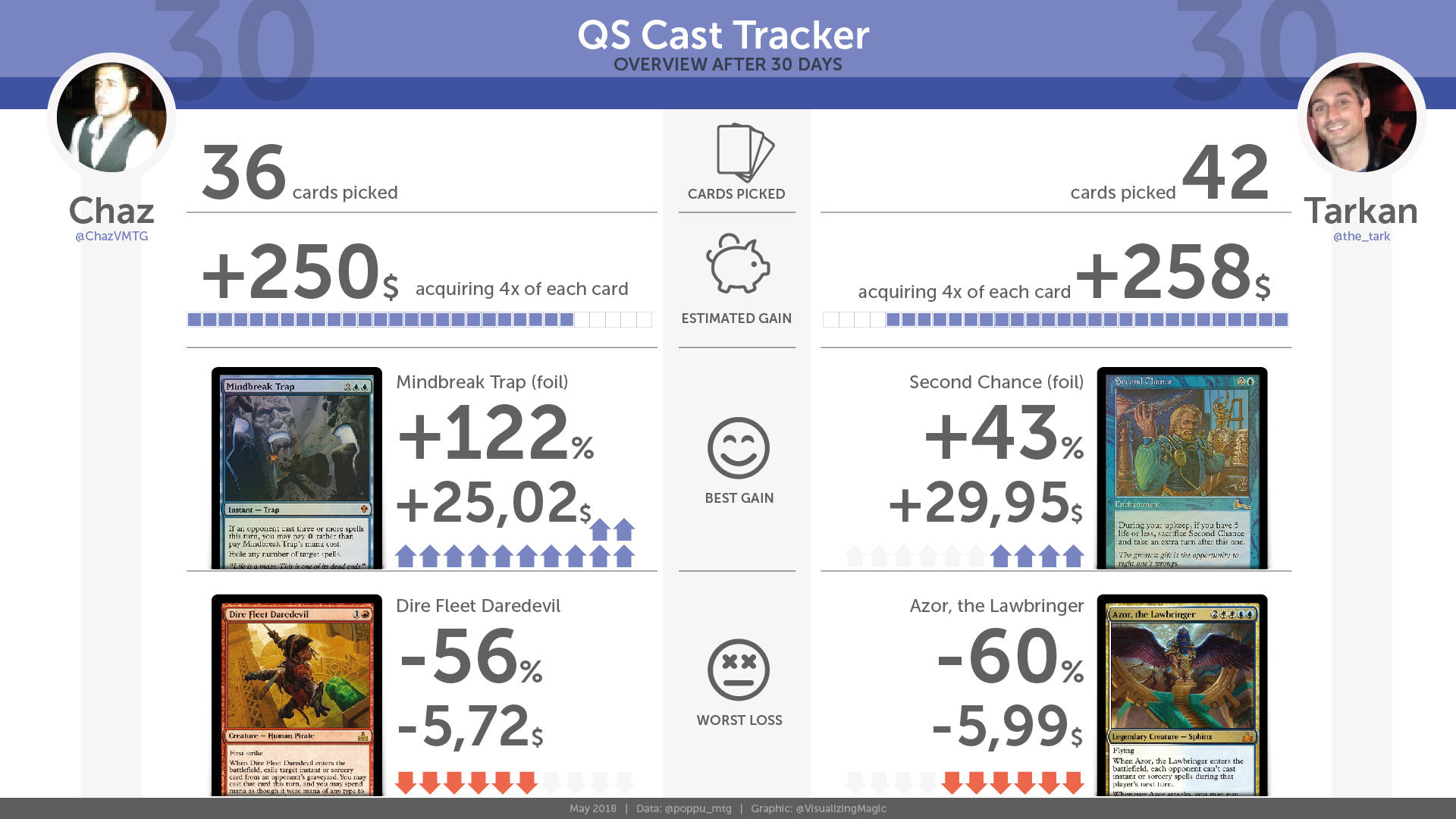 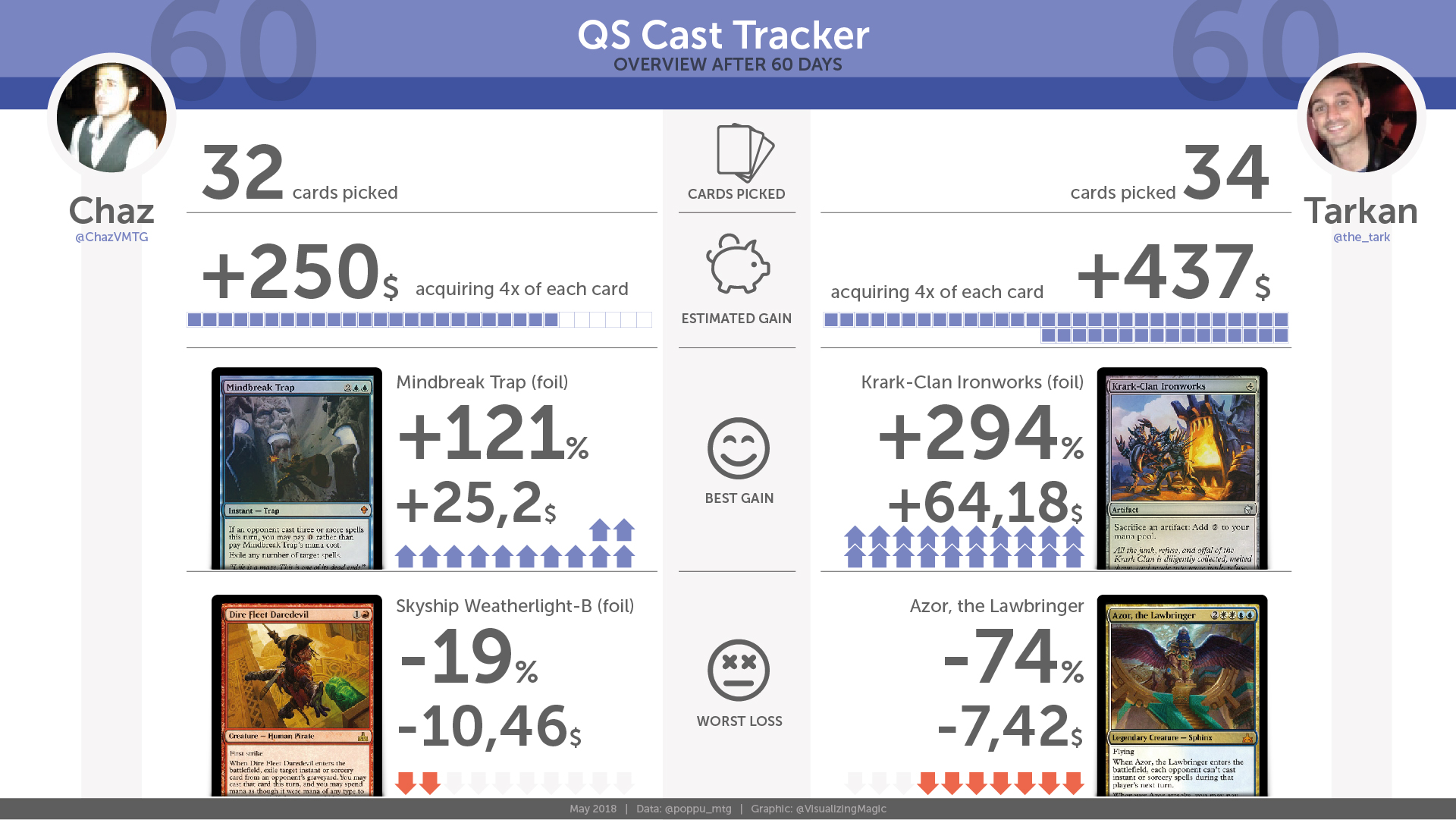 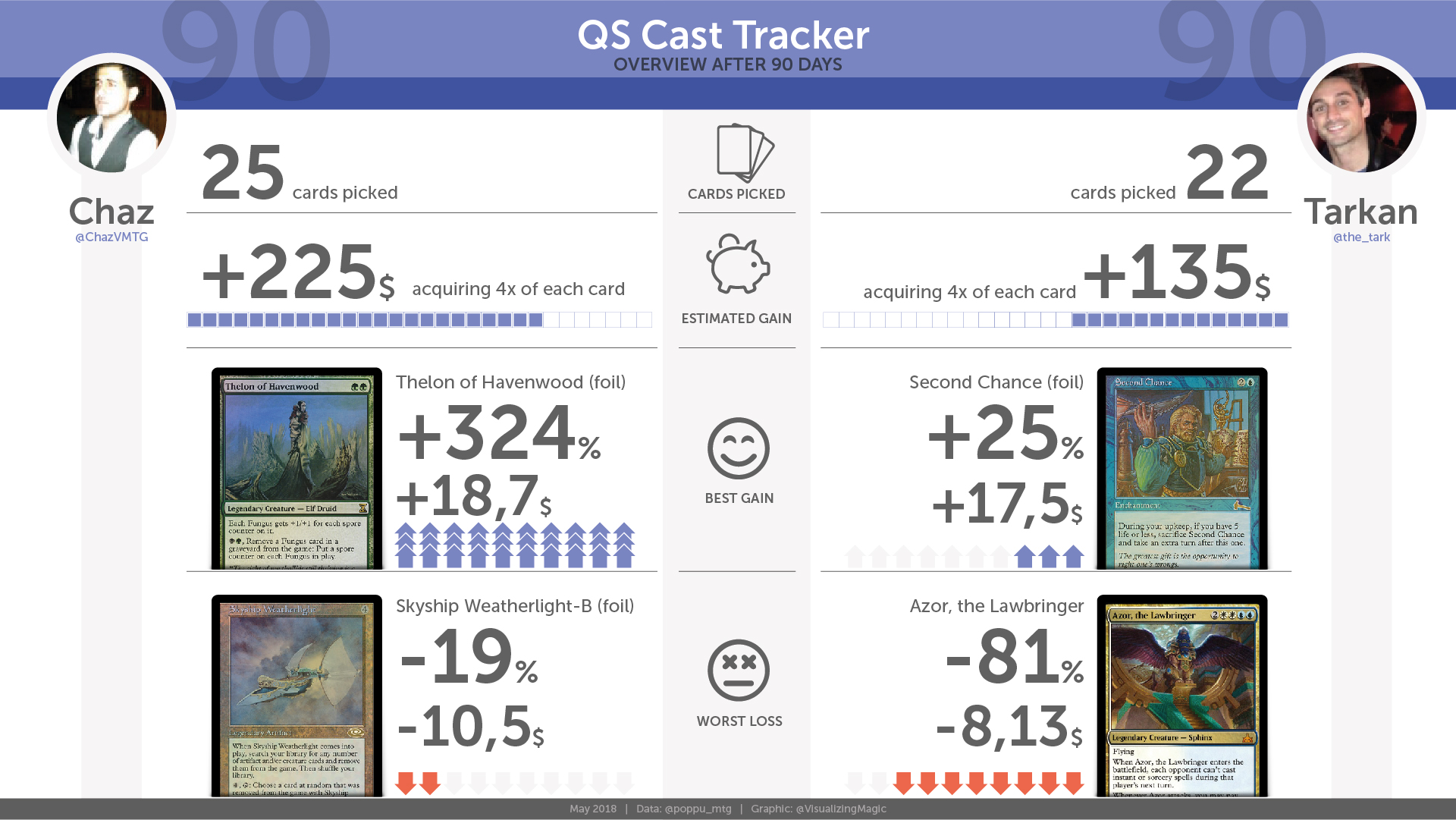 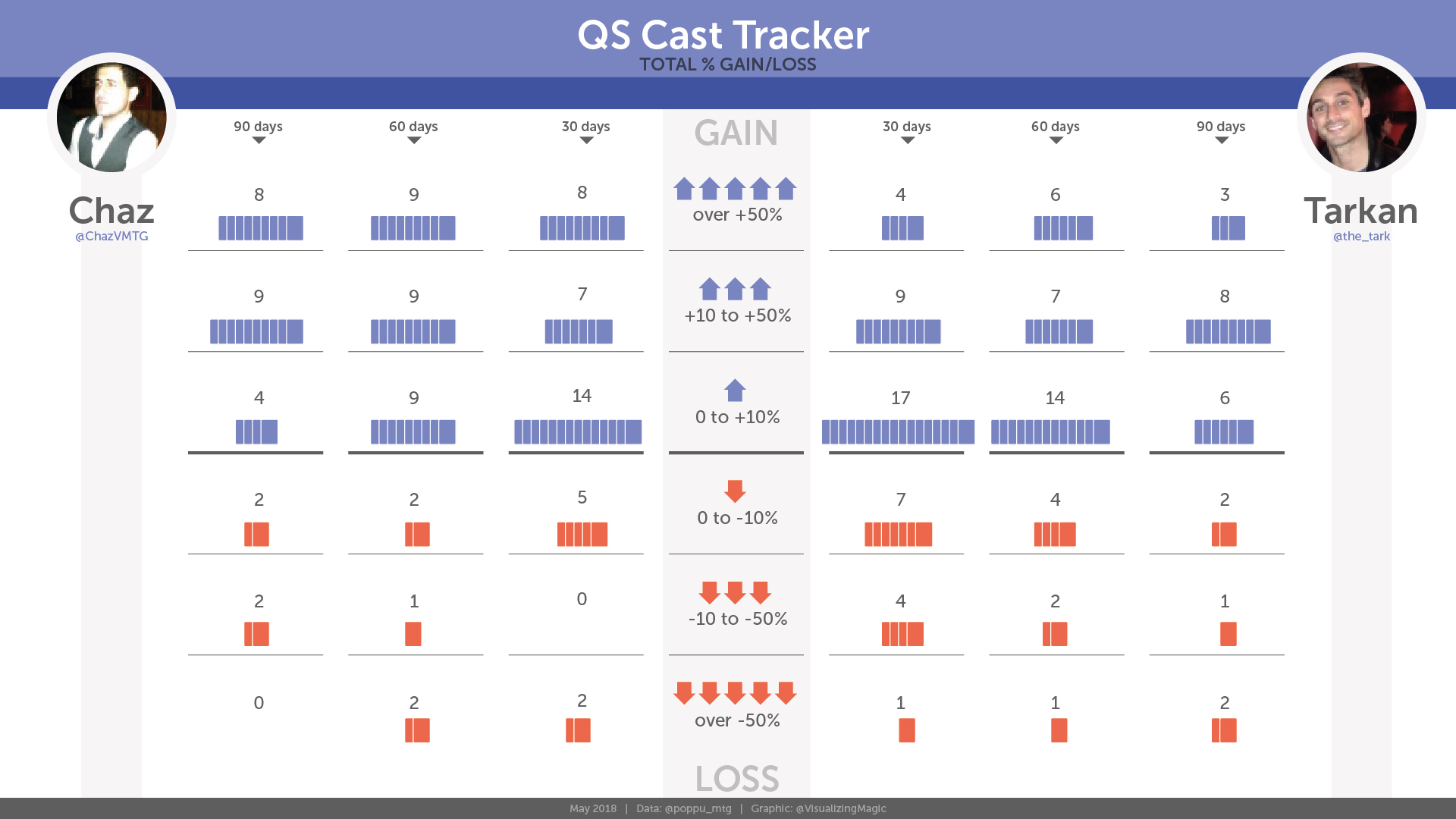 As a reminder, the dollar amounts mentioned in these graphics are calculated based on the total amount gained or lost when purchasing a playset of a card picked by either caster at the time it was mentioned on cast, then "cashing in" on that playset after 30/60/90 days. With that said, let's analyze the numbers shown above in further details.

First off, it is impressive that, despite having their share of clunkers (looking at you, Azor, the Lawbringer and Dire Fleet Daredevil), both Chaz and Tark come out ahead as much as they do. Chaz's consistency over the these three intervals is quite an impressive feat on its own, netting at least $225 for each of them. Tarkan's average return falls in the same ballpark ($277 to Chaz's $242), but his numbers have a larger variance. This doesn't take anything away from his call on foil copies of Krark-Clan Ironworks, which spiked 294 percent with a gain of over $64 per copy.

Chaz's biggest advantage, however, is how good his good picks are (consistently having eight or more cards gaining over 50 percent of their original value) compared to how bad his bad picks are (at most three cards dropping more than 10 percent). Digging deeper, I found that it is actually the "preorder game" that is preventing Chaz from being even more successful: Dire Fleet Daredevil and Steel Leaf Champion are the only two cards dragging him down with losses over 20 percent, along with his only huge gamble of a pick in the alternate art foil of Skyship Weatherlight from Planeshift. Without these three cards, Chaz would easily make over $300 for each time period!

Tarkan's situation is definitely more intriguing: he doesn't post that many more duds than Chaz does (see the Overall chart), but the problem is the actual value lost per card which is often at or around $1 per copy. Thankfully, in what can now be established as Tarkan's pattern, his hits are very solid ones: foil Krark-Clan Ironworks and Second Chance along with a couple of foil EDH Generals (Athreos, God of Passage, Sidisi, Brood Tyrant) have all either spiked hard or significantly jump up. The foil Ironworks alone is responsible for $257 gained over the 60-day period!

All in all, the QS Cast picks are very representative of where the money is to be made – or saved, depending on your approach to the game. With the scheduling change of the time interval between set release and corresponding Pro Tour, it has become increasingly difficult to play the preorder game, especially when the new sets are opened as much as they recently have been.

So the next logical move is the EDH scene, and tribal strategies in particular: when discussing the Tracker with our casters earlier this month, Chaz was concerned that Tarkan had turned a corner with his call on Krark-Clan Ironworks thanks to the increasing popularity of the namesake new Modern hotness (piloted by Zac Elsik to a top eight at the most recent SCG Invitational), but then regained the upper hand when noticing the Saproling, Fungus and Thallid themes in Dominaria and pointed our listeners to foil copies of Thelon of Havenwood. The card then jumped by more than $19, good for a 333-percent increase.

After a tough learning curve early this year with the release of Rivals of Ixalan, both Chaz and Tarkan seem to have adapted to the new trends in MTG finance:

Join us next month, when I will be rotating out all of January's picks: no more Azor nor Daredevil for anyone! The race is on; which caster will come out ahead at the end of the year?