It was a bloodbath this week in both digital and paper prices, with the sets rotating out of Standard dropping by an average of 22 percent on MTGO. The summer lull has arrived and prices have reflected that reality. The redeemable sets held up better, but it is mentionable that Rivals of Ixalan (RIX) and Ixalan (XLN) are both out of stock in the store at the moment and await the arrival of a fresh (and final) redemption print run of complete sets.

For players and speculators alike, Dominaria (DAR) is an interesting question as to when it will bottom out in price. Buying in at the approximate bottom can go a long way toward stretching your tix and allowing you to play cheaper or speculate with more success, so researching this question is valuable. Any research should start with the historical precedent, then updating that precedent with the current or new realities. To get a sense of where the price of DAR is heading, let's have a look at how the price of recent large sets have evolved over the weeks after they were released. 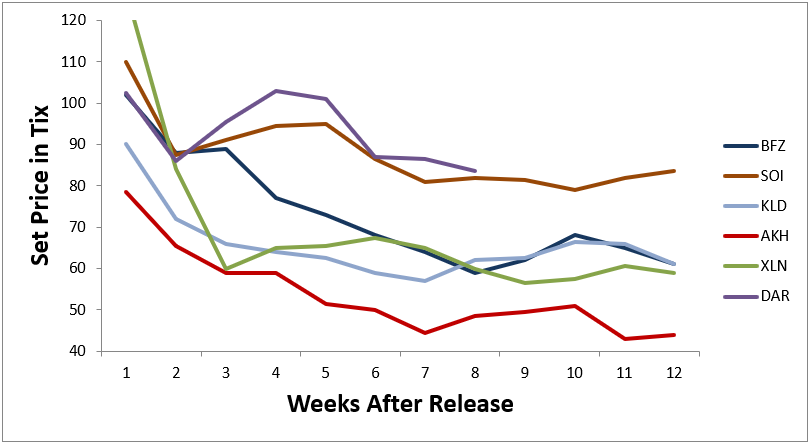 DAR is carving out an interesting path as it is currently the most expensive set at this point in its release window, though it is not far off of Shadows over Innistrad (SOI). That is very interesting, as both sets were late spring releases and both sets did not feature Masterpieces. Thus, SOI is our best historical indicator for where the price of DAR will end up, at least while it is being drafted in triplicate. 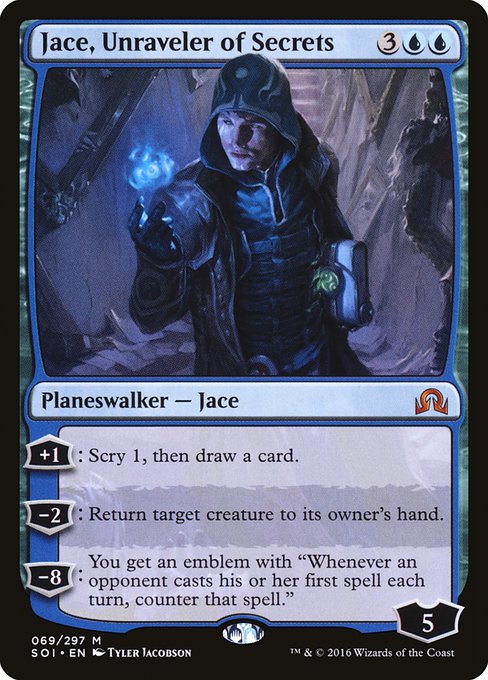 There is a little under three weeks of DAR drafting left before July 9 when Core Set 2019 (M19) is released on MTGO. DAR is currently at the eight-week mark and sits in the low 80-tix range. At the ten- and eleven-week marks, SOI hit 79 tix and 82 tix respectively. From this analysis, it's reasonable to surmise that DAR is close to a price bottom and that dipping below 75 tix is unlikely over the next month.

From a player's perspective, this is great news, as they can feel safe in rounding out their playsets over the coming weeks without the fear of a great loss of value in the short term. There's just not much further for this set to drop, so buying now makes sense if you are going to be playing Magic and getting some utility out of your cards.

For speculators, it's a little too early to start establishing a large position in full sets. The strategy is to buy full sets while the cards are being opened in Draft, hold as long as the set is still available for redemption, and then sell when prices creep upward. The returns are not fantastic in an absolute sense, but they are predictable and the risk is low.

Speculating on singles is something I am fine with doing at the moment, though I would slant my purchases to long term value plays. The big price movements are going to come in the fall as Standard rotates, so I don't want to be a buyer of a single like Karn, Scion of Urza right now, as it would tie up a lot of tix over the summer and it might not yield a big return until October or later.

I would note, though, that buying Karn in the context of a full set purchase is correct, as you want to be diversified over the entire set. It might be that Karn goes up or down in price, but the price of a full set of DAR will go higher. Buying the full set means you are speculating on the pool of value that it represents and the price fluctuations of individual cards carry less weight.

When Wizards of the Coast (WotC) created Treasure Chests, they were looking to capture the value of the lightly printed cards that commanded high prices. Mercadian Masques (MM) block was a prime example of where they were trying to mine for value, as the set was never released online and it was only available in flashback draft formats. MM block cards ended up being some of the most expensive cards because the draft format isn't popular, resulting in very low supply.

Two prime examples of this are Rishadan Port and Tangle Wire, which carried prices of over 100 and 60 tix respectively before they were included in Treasure Chests. They now sit at 9 and 1.2 tix.  This created a new problem for WotC. They were successfully mining the value, of these older, out-of-print cards, but they quickly ran out of fresh veins to tap as the price of these old cards collapsed.

Last year, they shifted to including a lot of high-priced Standard staples and even complete sets from Standard on the curated List. This certainly helped raise the price floor and the recent strong interest in Modern helped push the price of  chests to a six-month high in the spring. Have a look at the chart below, courtesy of GoatBots, to see how the price of Treasure Chests has evolved over time.

Just before going to press, WotC made an announcement on a change to address a previous collation issue for DAR foils. You can read the full change here. They are going to be adding in the foils that were missing from DAR boosters from the first couple of days of the set's release, and they are replacing a portion of the Standard common/uncommon slot. This is going to give a temporary boost to the expected value of Treasure Chests when the change is made. They also hinted at further changes with the release of M19.

For a complete look at my recent trades, please check out the portfolio. The change to Treasure Chests just announced means that the expected value and the price of these will increase when the change is implemented. 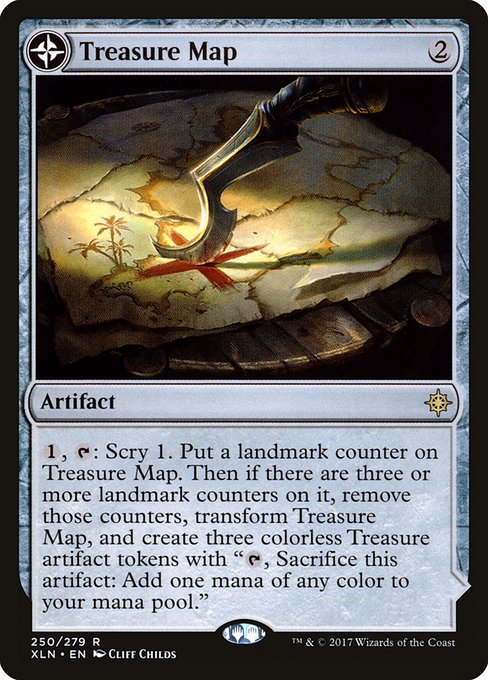 It's worth keeping in mind that these are a very liquid digital object, traded in a similar way to in print boosters, so buying a few Treasure Chests today is a guaranteed profit. This works because the contents of a Treasure Chest is only determined when it is opened, so when the contents are updated there will be a step increase in the value of the contents. All you have to do is buy a few Treasure Chests today and then you can wait for the addition of these foils and the price will increase, though the bigger increase will occur when WotC reconfigures the curated card list with the release of M19, which they have only hinted at so far.