This will be my first ever article here in QS that is related to Legacy. I'm writing this as there was a big change to the Banned & Restricted list on Monday: Deathrite Shaman and Gitaxian Probe are banned in Legacy. It has been a while since the last change in Legacy, so this is a great opportunity for investments. 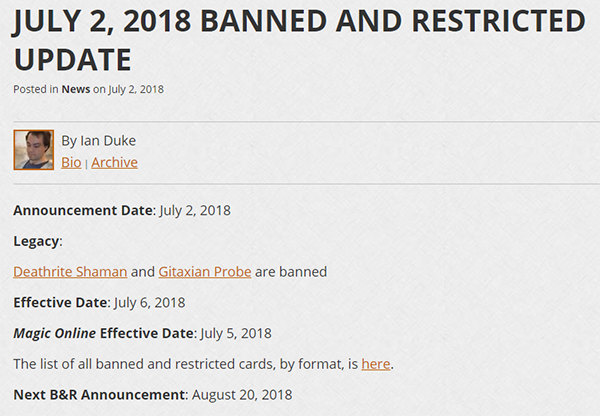 Ever since Sensei's Divining Top was banned, Deathrite Shaman decks quickly became the tier-one decks while Gitaxian Probe was also pushing Ad Nauseam Tendrils and Delver variants to the top of the format.

After the Shaman ban, the clear winners are of course graveyard based decks like Reanimator. Griselbrand increased by at least four tickets over night. And it seems like the card will still continue to go up in price going forward. If you are holding copies of the legendary Demon, get ready to sell them off at good prices.

At the current price Griselbrand might still increase in price by a bunch, as the banning could be the chance for Reanimator decks to re-emerge as one of the best decks in Legacy. Meanwhile, if you've been playing Modern online, you might have met some players jamming a Griselbrand and Goryo's Vengeance package into their Hollow One decks.

So if you are looking for some good profit in the next few weeks, Griselbrand might be your best pick right now! Also, since I've talked about the Goryo's Vengeance tech in Hollow One, I would also recommend checking on the two-mana reanimation spell, although it's not a Legacy card.

While graveyard decks return to be better in Legacy after the banning of Deathrite Shaman, the midrange decks of the format are also going to change.

While Deathrite was legal, a turn-two True-Name Nemesis or Leovold, Emissary of Trest definitely outperformed the so-called strongest creature ever printed, Tarmogoyf. Without Deathrite, players can no longer shrink Tarmogoyf so easily, and the three-drops become worse since they can't come down on turn two unless players start messing around with other mana dorks like Noble Hierarch.

Tarmogoyf's price is at its all-time low right now, near 20 tickets each. The last time Goyf spiked by at least 30 tickets was when Bloodbraid Elf got off the Modern banlist. I think with Deathrite and Probe banned in Legacy, Grixis Delver will quickly be replaced by Temur Delver which is stronger based on cards in graveyard. Aside from Tarmogoyf, Nimble Mongoose, which is also a core component of Temur Delver has already increased by at least 1 ticket.

Here I strongly recommend picking up some Goyfs for investment as I think its time in Legacy has come back. The delve creatures will no longer be as good because the main fuel that makes them easier to cast—Gitaxian Probe—will be gone from the format.

Next up, I want to talk about land disruption like Wasteland and Rishadan Port. When somebody resolves a Deathrite on turn one, they are pretty much immune a mana denial strategy, and decks like Death and Taxes are already so far behind if they are playing second.

I expect Death and Taxes, together with Life from the Loam decks, to regain popularity shortly. I think this is an opportunity to invest in these cards while they are still low. Even if you are not considering buying these cards for investment, do also consider getting your own playsets if you haven't, because there's a big chance they will be expensive later on!

Life from the Loam is not only a great card in Legacy but its also very popular in Modern Dredge. Recently Dredge just won a Grand Prix, which should be proof that Dredge is still good in the new Modern metagame full of control decks.

In Legacy, Life from the Loam is more of a midrange card, often played together with Knight of the Reliquary—another graveyard-dependent card that was kept in check by Deathrite. Knight increased in price during the last few days, so I think the next card to increase in price will very likely be Life from the Loam.

Lets look at some of the good anti-graveyard sideboard cards available in Legacy:

As I said earlier, I expect green decks and D&T to become better after this, so Rest in Peace and Scavenging Ooze are my picks for graveyard hate. These cards are also widely played in Modern, so if green or white decks become good with these cards in Legacy as well, they will likely increase in price. I definitely suggest getting some Ooze and Rest in Peace for investment here—they are going to stay in both Modern and Legacy for quite some time, so these picks are pretty safe.

Another card I want to suggest looking at is Containment Priest. With decks that plays reanimation effects and Green Sun's Zenith likely to become popular again, Containment Priest is looking great as a speculation, especially when the price is at its low point, as you can see in the graph above. Do consider buying a couple of playsets just in case!