The window to invest in Core 2019 opened much earlier than usual, and prices have already risen to $70. This took me by surprise, and in fact as of this article’s writing I’ve made only a modest investment into one card on this list (the card I rank #1, it turns out). I’ll be keeping my eyes peeled over the next month for card prices to dip.

The Bad and the Ugly

Core 2019 offers an abundance of horrid speculation opportunities. There are just as many pure Fs in Core Set 2019 as there were Ds and Fs in Dominaria. These five are particularly bad because they have room to fall and definitely aren’t going up.

Sarkhan, currently worth $7.80, is a powerful planeswalker that is already seeing a lot of Modern play. The problem is that it’s very difficult for a new card not seeing play in Standard to hold that value. I think its Standard viability will become nonexistent once Glorybringer rotates in the Fall, and at that time it will be worth picking some up. I’m only interested in Sarkhan below $4.

Even though this creature has wings, it will never be better than Carnage Tyrant.

Fun fact: Wizards has never printed a vanilla 6/6 flyer for 6.

Now is a good time to pick up your copies if you need them for eternal play, but I have a high degree of confidence that this card will be mired at its current $2 price for a long time. Something truly astonishing would have to be printed in the next few sets for this to become a worthwhile investment.

Palladia-Mors is the first card on this list that has the look of a Standard-playable card. The problem is that Carnage Tyrant will be in the format for the entire time that Palladia-Mors will, and that makes it hard to envision it ever seeing play.

Tezzeret is a powerful planeswalker, and its generic power level will likely improve once Goblin Chainwhirler loses metagame share. Two things hurt its potential. (1) Ravnica is not an artifact plane; and (2) Teferi, Hero of Dominaria is generally better.

As with Sarkhan, I expect this card to lose some value at rotation, and I think it might be worth picking some up at that time. $4 is a tad high, but something closer to $2.50 would make Tezzeret an attractive speculation opportunity. 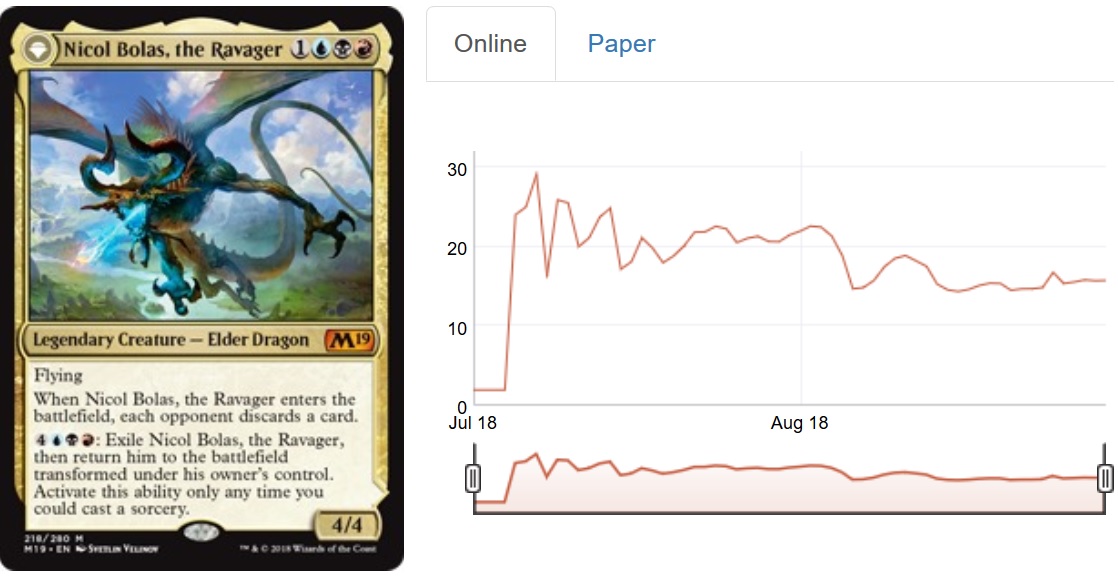 It’s hard to know where to put Nicol Bolas on this list. Right now Nicol Bolas is going for $15.50, and that just seems awfully high for a card that likely won’t be seeing much play after rotation. Six to nine months from now, though, I could see Nicol Bolas commanding $25 as a playset in Standard’s best deck. My recommendation is to wait—keep your capital liquid! 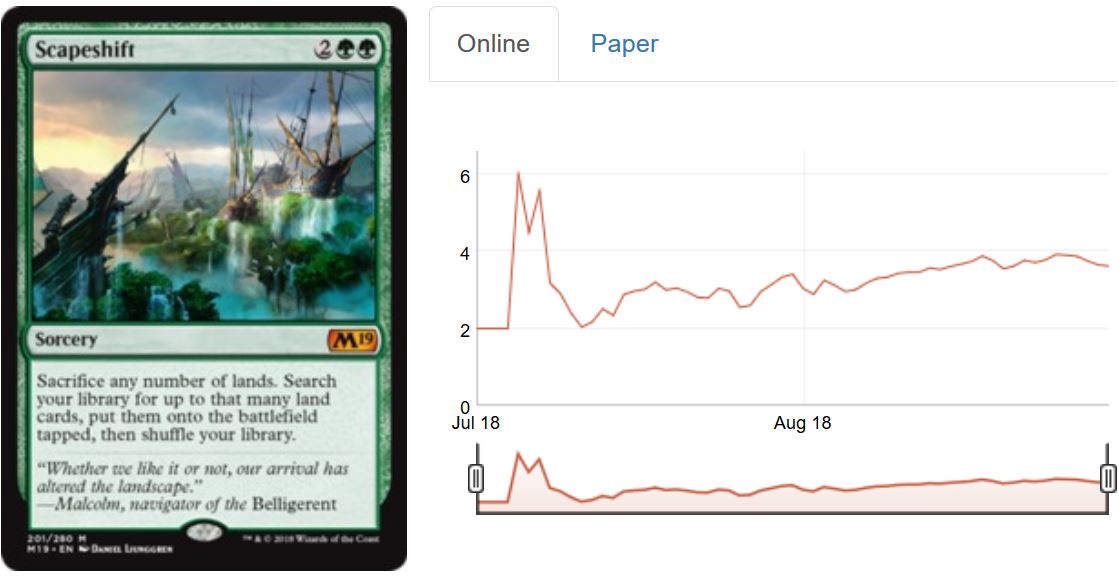 I regret not having already invested in Scapeshift. I should have treated Scapeshift’s reprint as a Masters set reprint, buying in a few weeks after Core 2019‘s release. It has slowly been going up ever since, and I expect that to continue over the coming year. Lesson learned for next year’s Core Set reprints. 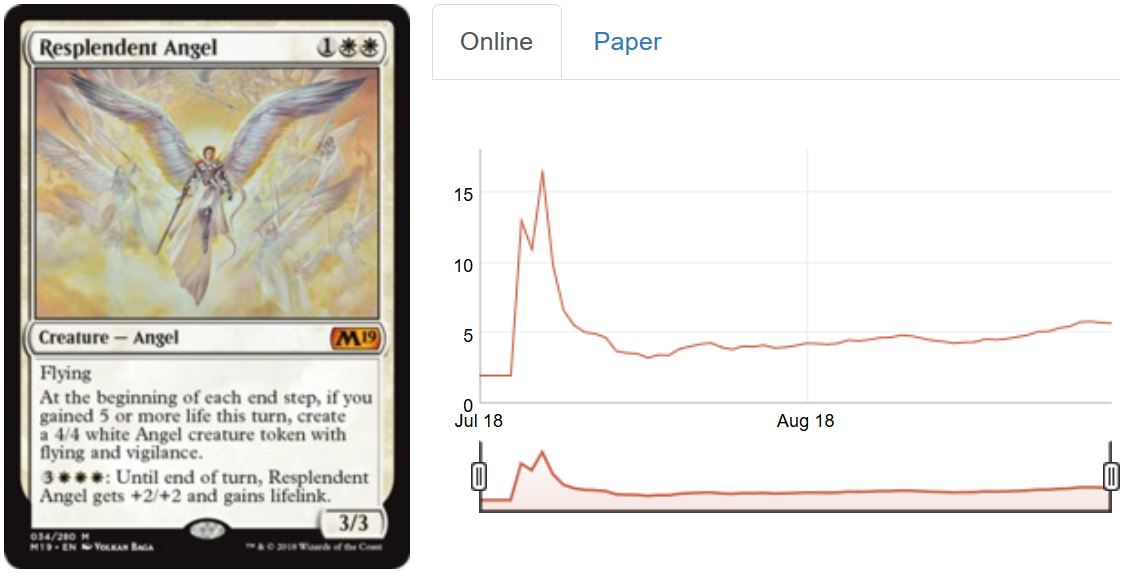 There’s stiff competition at the three-drop slot in white: History of Benalia is better overall, and Benalish Marshal will likely be preferred in most decks.

That Resplendent Angel is going for $5.50 despite seeing minimal play signals that investors believe strongly in this card. Short of a Thragtusk reprint, however, I don’t think this card will breakout over white’s other stellar options. If it does, it would likely shoot up to $15 as a small-set mythic, so the potential is real and alluring. 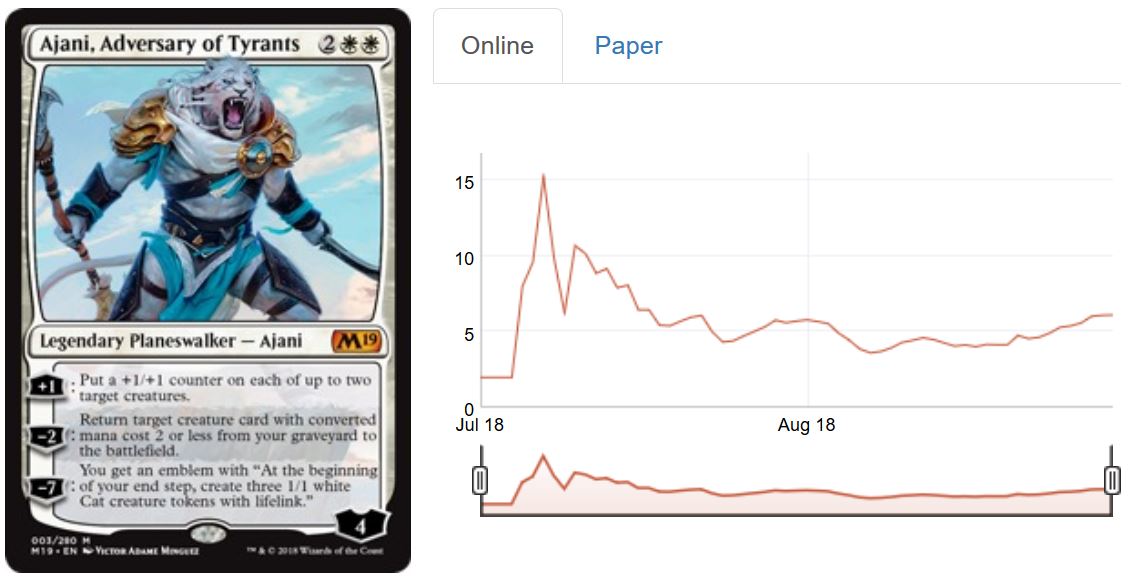 I think Ajani is the most underrated card in Core 2019. Although it ostensibly doesn’t generate value on its own, the -2 should be a way to generate value on an empty board if your deck is built to take advantage of his +1. Ajani looks like a $7.50-$10 planeswalker and is an attractive speculation between $3.00 and $5.00. Sadly it’s still north of that, currently at $5.96, and I’m unsure how I’m going to proceed. 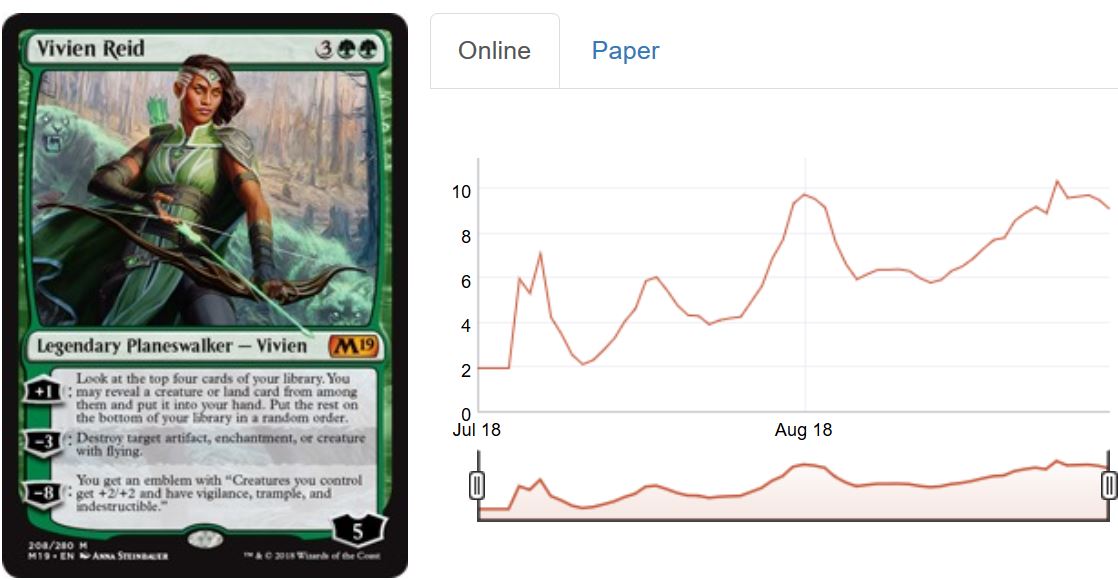 Vivien Reid is the most enigmatic card on this list. A few years ago I would have said, “Obviously a $5-$10 card. Just look at Liliana, Death’s Majesty or Ob Nixilis, Reignited.” But then Vraska, Relic Seeker and Carnage Tyrant came, both spiking above $15. Vivien will play in that same space (a sideboard staple of Tier 1 green decks), with far less supply to go around.

I’m hesitant to be a buyer at her current $9.50 price, but I fear that hesitancy is rooted in old prejudices formed from old price patterns. Green would have to be pushed out of the metagame for her to settle below $9 or $10, and I think spikes above $15 are likely. She’s just plain powerful.

Know that there is some risk here and that past precedent is very mixed on planeswalkers like her commanding such a high price. 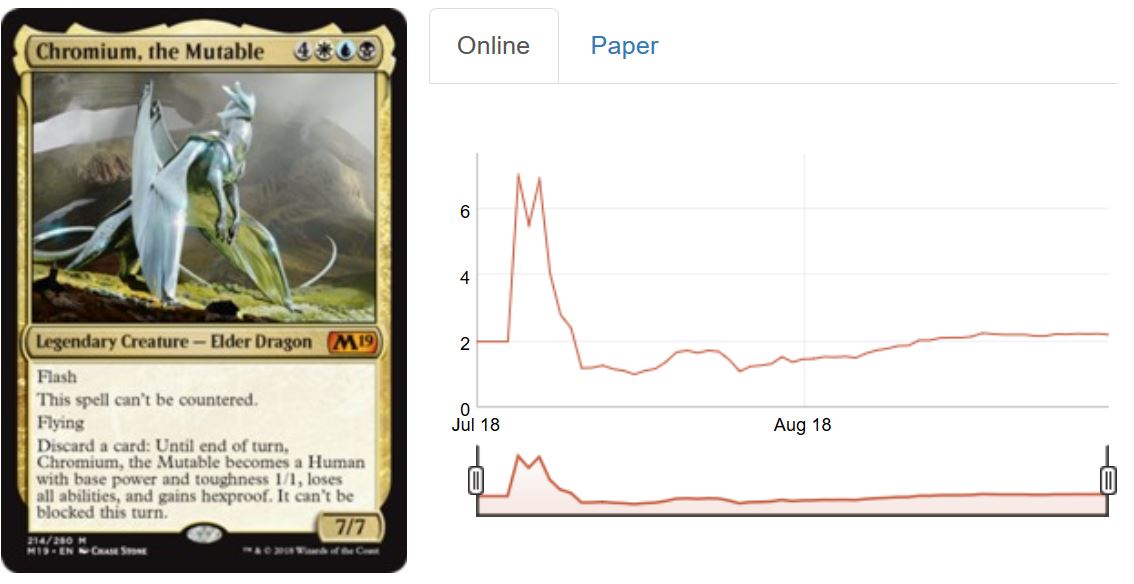 Chromium is a premier mirror breaker, and a better one likely won’t be printed during its time in Standard. Rosewater noted that Chromium was created specifically as a mirror breaker for Standard (Play Design noted that Standard needed one), and so this should be the next incarnation of Sphinx of the Final Word.

Sphinx of the Final Word spiked to $12 during its life in Standard, and I think it a safe bet that Chromium will at least double its $2.00 price tag. The only reason to be worried is that it is three colors, but Teferi’s presence in Standard alleviates that concern for me.