Welcome back, folks. Today we're going to plunge forward and go over the best rares for you to invest in from Core 19. In case you missed last week's mythic article, check it out here.

With the rares, I will only rank the top 10. These rankings are intended for Magic Online, but the analyses will likely be helpful for paper players and investors. Paper players should ignore cards on this list that are bulk (sometimes on Magic Online, bulk cards prove to be the best investments and have the highest rates of return).

Also, these rankings are reflective of August and September (for players wanting to invest in the near term) – I will note when I think cards will go up in the rankings after rotation as I did with Sarkhan, Fireblood and Nicol Bolas, the Ravager // Nicol Bolas, the Arisen last week. 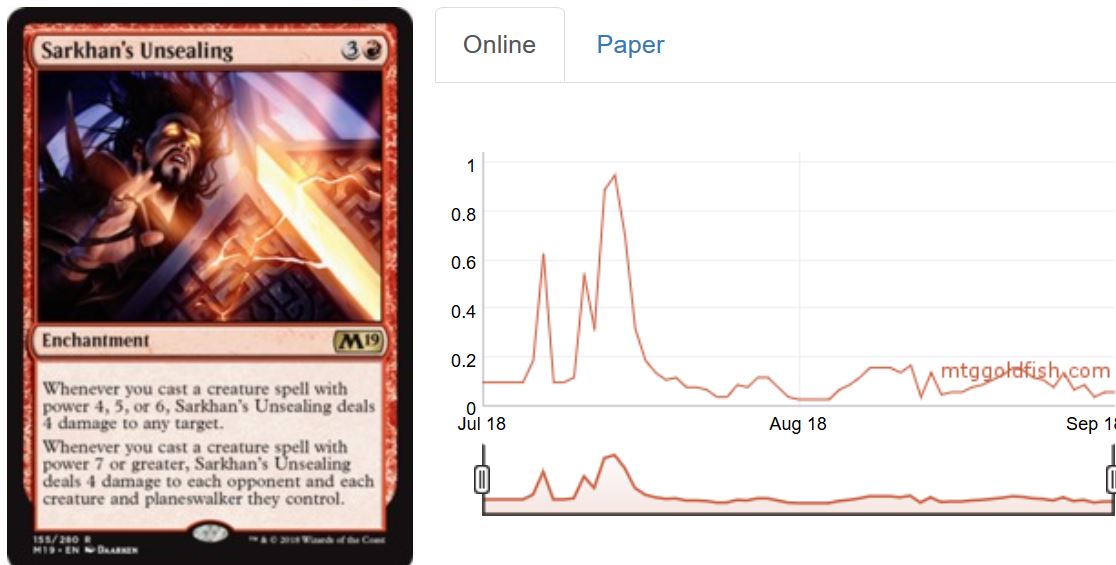 Sarkhan's Unsealing squeaks just ahead of Gigantasaurus and Valiant Knight for the final spot. Although similar to those cards in that it is narrow and thus has a low ceiling, I think it is more versatile and more likely to spike up in price.

Sarkhan's Unsealing is a powerhouse worth being built around, and I like that it can serve both as a maindeck centerpiece and as a piece of sideboard tech. Most of the best green creatures have four or more power: Vine Mare, Steal Leaf Champion, Gigantasaurus, Ghalta, the Primal Hunger. Hurting its chances in the near term is that Gruul will not get a second dual land pair until January.

Honestly, if this card gets just a bit closer to bulk, I'll likely invest in it. 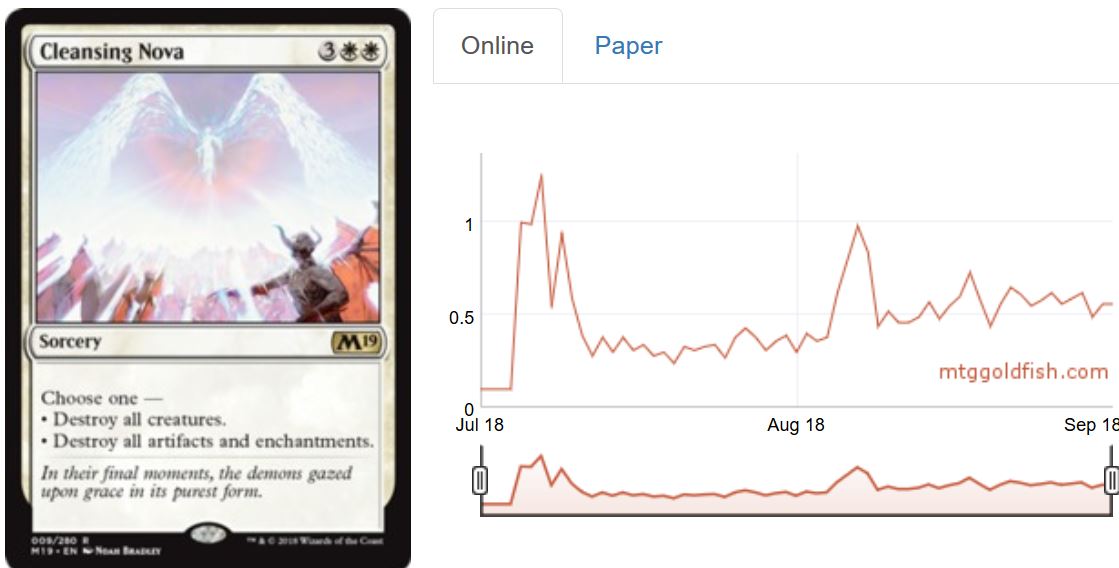 Worst-case scenario: End Hostilities. Best-case scenario: Fumigate. Considering that enchantment-based white removal is becoming more and more prevalent these days, my money is on the End Hostilities scenario. But, if Cleansing Nova becomes widely used, it will quadruple or quintuple in price. Personally, I'd be more comfortable betting on this at 0.25 tix than at its current 0.60 tix. 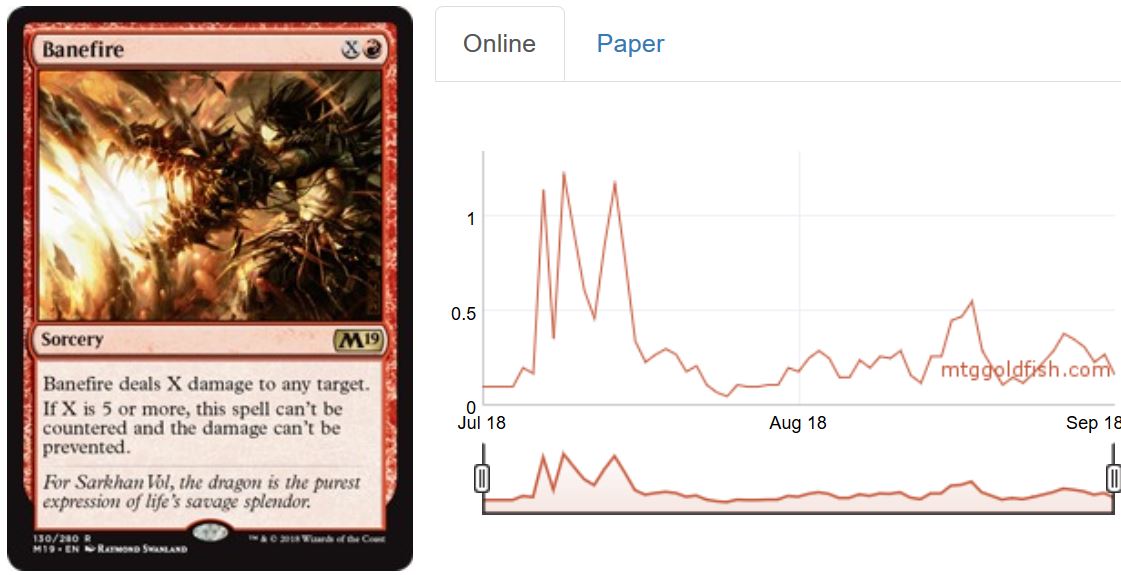 Banefire is a powerful card that will see a lot of Standard play, especially out of the sideboard. Even though Banefire has been reprinted multiple times, I think it should be able to command a price of 0.50 tix in the future. My hunch is that it will dip lower than that after rotation in the short term, though, and I would wait to snag your copies at that time. 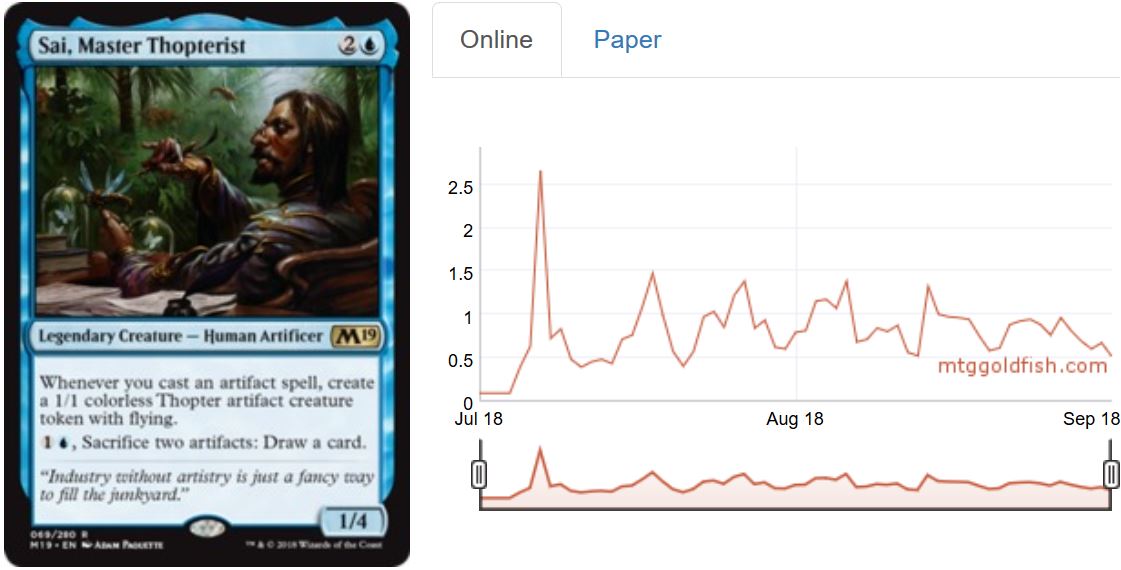 Even though it's unlikely Sai will be a major Standard player going forward since Ravnica is not known for its artifacts, it will likely continue seeing play in Modern, and there is an off chance that it will see play in Standard alongside Mox Amber. That's enough for me to consider investing in it and picking up a playset in case I want to play with it. 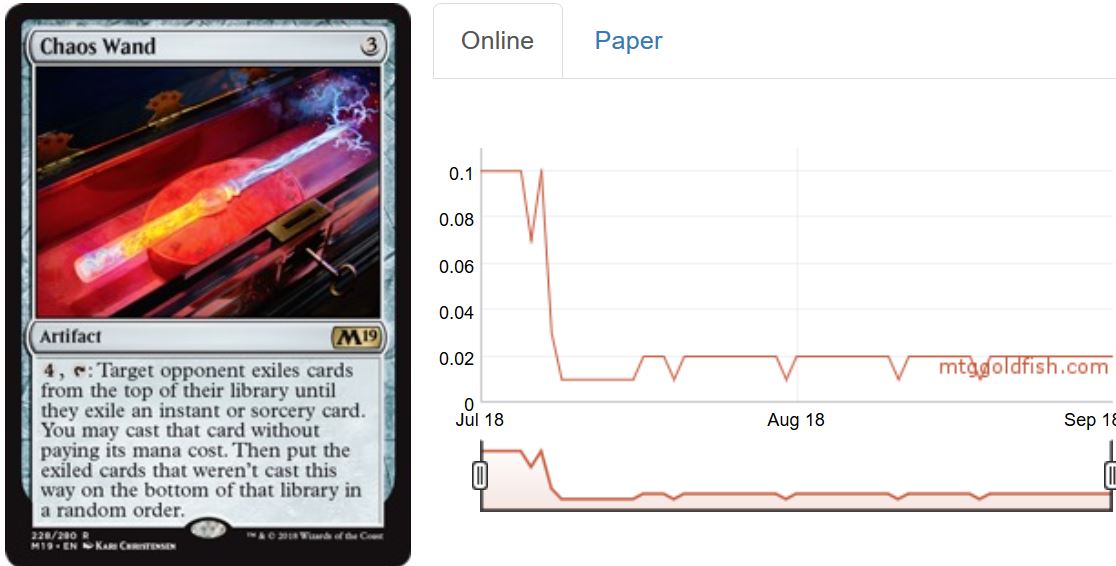 Chaos Wand is an extremely potent answer to a select few decks, and could become a sideboard staple should certain decks emerge as competitive tier one options. Like Sorcerous Spyglass and Scavenger Grounds, its price ceiling is higher than you might think because all decks have recourse to it.

There's no way I'd rate it as highly were it not colorless and from a set with small supply. 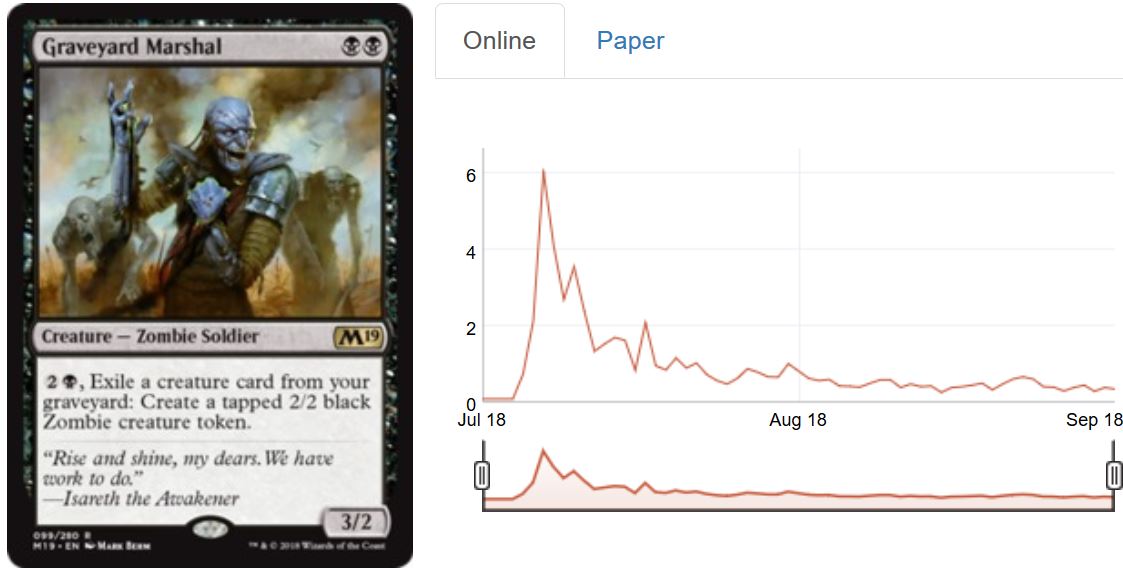 I'm torn on Graveyard Marshal. It's a powerful card in its own right, good in the beginning of the game and good at the end. The Zombie creature type is a definite plus. However, the double black cost is problematic considering that no shell for a black aggro deck will seemingly exist after rotation.

Even still, it's an overtly pushed card that should see some amount of play. The question is, how much. I don't think I'll be investing in it, but I certainly wouldn't fault you for doing so. 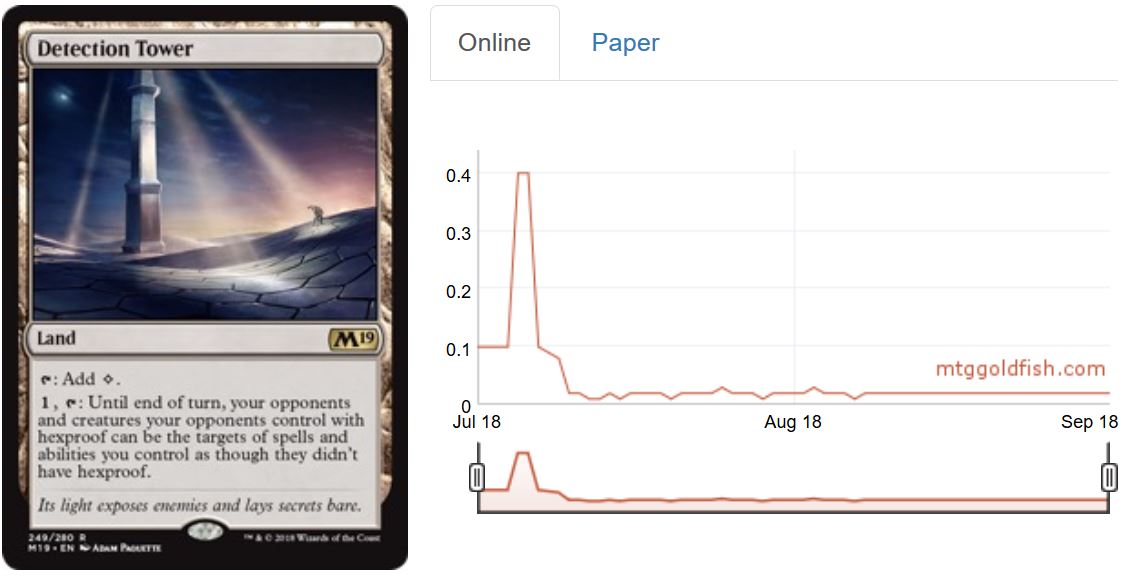 With Carnage Tyrant and Vine Mare staying in the format and colorless utility land all-star Scavenger Grounds leaving, I think Detection Tower is poised to see an increase in play. It competes with Arch of Orazca for a slot in a slower or controlling deck. It also matters whether the majority of decks going forward will be three color or two color.

Scavenger Grounds skyrocketing from 0.50 tix to 9.00 tix showed just how great the demand for colorless utility lands can be should the metagame break a certain way. I don't think Detection Tower's ceiling is anywhere near as high, but at bulk prices, you can't go wrong. 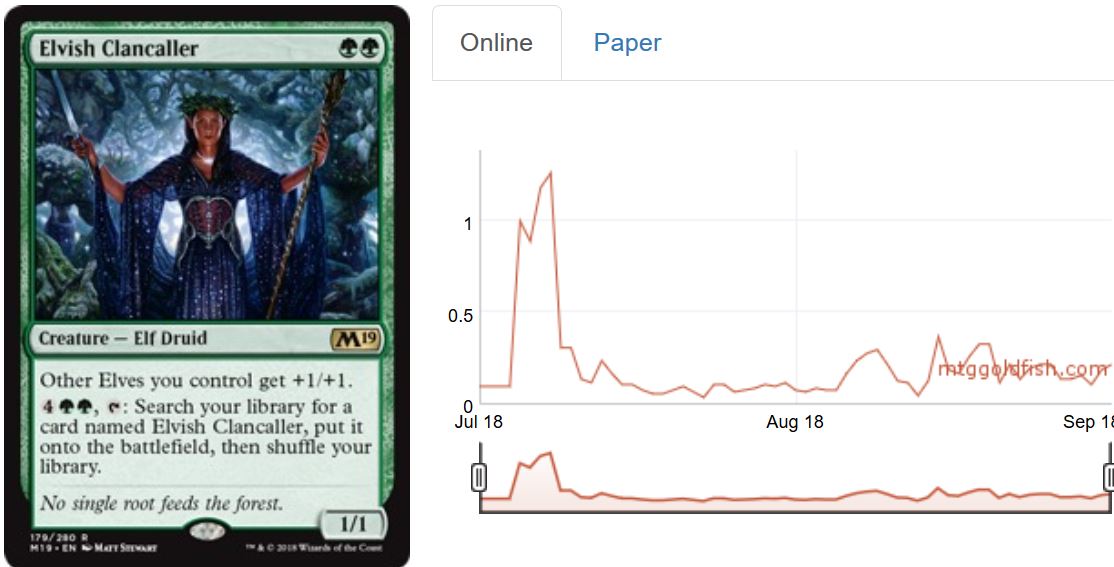 Already the Clancaller has found a home in Modern, and it wouldn't shock me for an Elf deck to materialize in Standard as sets of Ravnica are added to the card pool. I like that this card wants you to play the full playset. At only 0.10 tix a copy, this card has much room to grow. 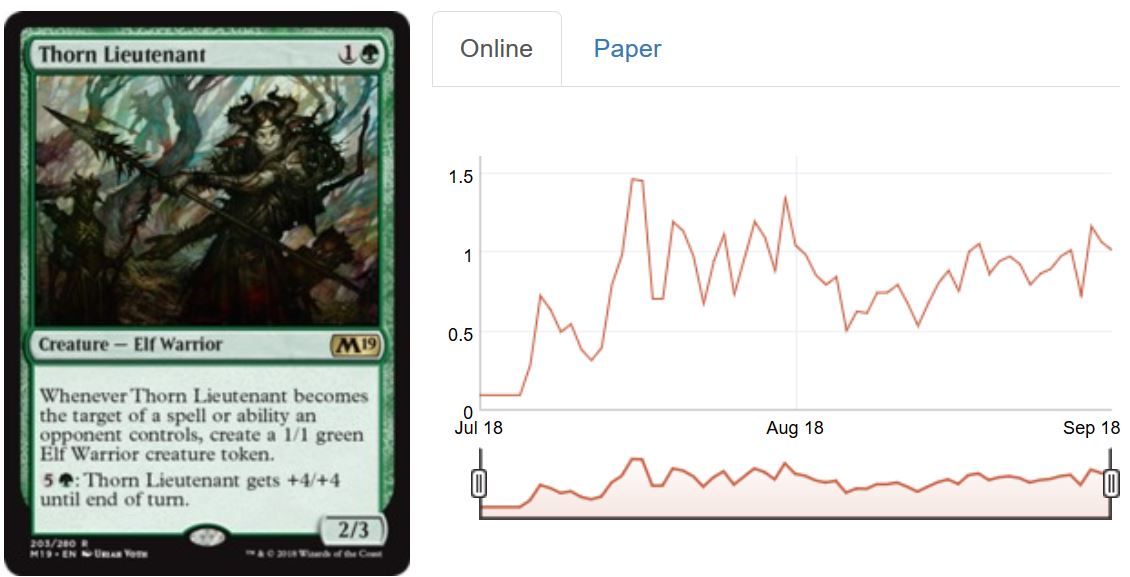 Like Graveyard Marshal, Thorn Lieutenant is one of those obviously (and obnoxiously) pushed cards for Standard and may or may not have a relevant creature type. The difference is that this one is easier to cast and will have an obvious home in Green beatdown decks going forward. 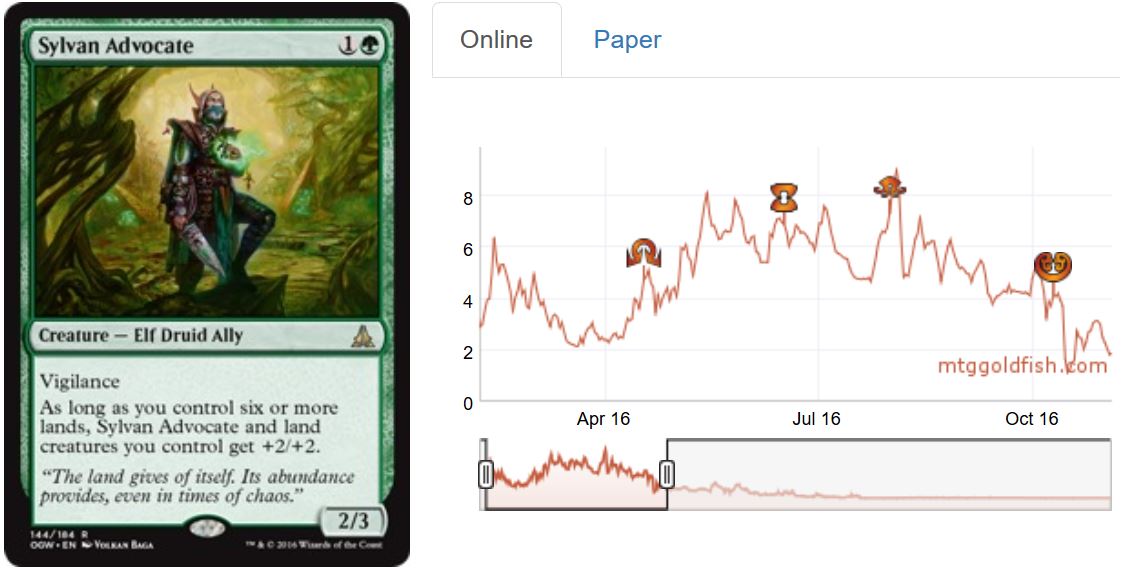 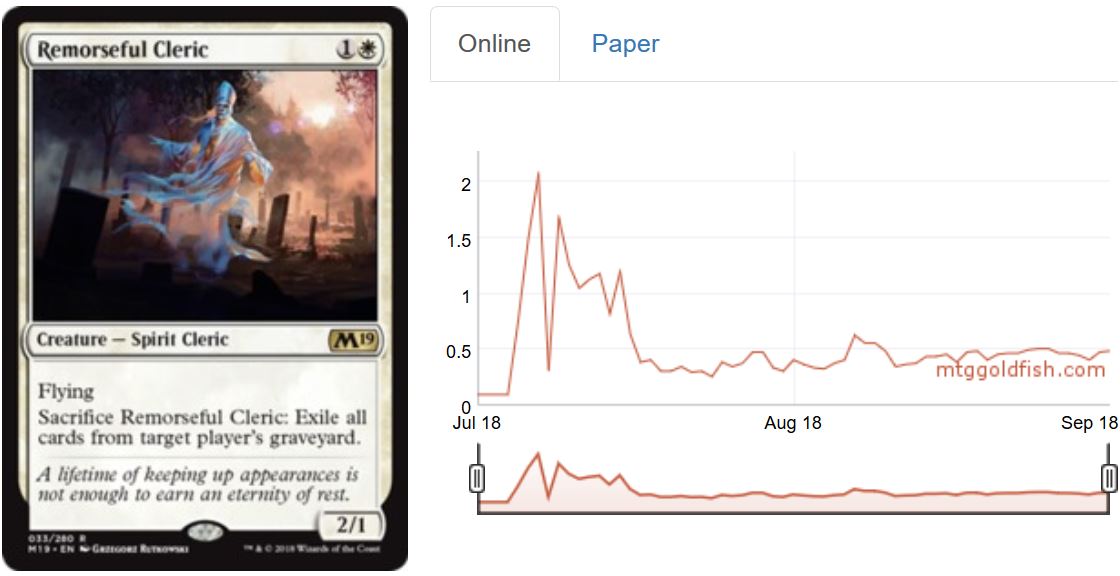 "Guilds of Ravnica has a heavy graveyard theme in four of the five colors, you say? Hold my holy water."
Risk: Low-Moderate
Potential: High
Chance of Success: 60%

Remorseful Cleric is a powerful card, currently priced at 0.46 tix off the back of Legacy and Modern demand. Going forward, Scavenger Grounds is rotating and Goblin Chainwhirler will see less play, and that should give Remorseful Cleric a real shot at becoming part of the core fabric of Standard. If it does, we should expect its price to rise to somewhere between 1.50 and 4.00 tix, which would be a very high rate of return.