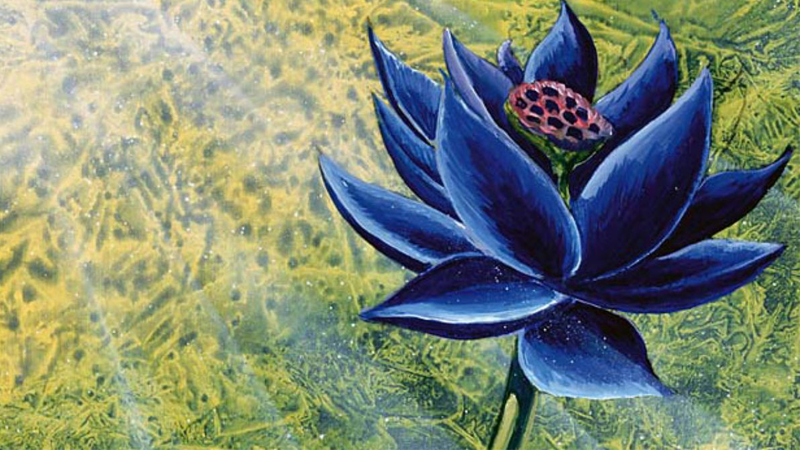 Not long ago I ran a somewhat controversial poll on Twitter, inspired by internal discussions within the Quiet Speculation Discord.

It’s midnight. Your doorbell rings. Which The Dark creature would you fear most on your doorstep? Pictures in thread.

No no, not that one! Though I am curious to hear what others think—134 votes is surprisingly high for such a silly poll, but I question The Fallen’s dominance. By the way, financially speaking, Rag Man is the most relevant of the three.

The poll I’m referring to is this one:

This deceptively simple question, seven words in length, created a bit of a stir on Twitter. After a whopping 380 votes, the poll came out nearly dead-even. If someone were to run statistics on these results, I wonder if there’d be a statistically significant difference between “Yes” and “No."

Why is this such a complex question despite its face-value simplicity? This week I’ll peel the layers back on this question and share both community sentiment as well as my own thoughts.

The return on investment yielded by the Power 9 over the past 5, 10, and 25 years can be described as phenomenal. Here are some prices for Unlimited Black Lotus, with values pre-2012 coming from InQuest magazine issues. Values from 2012 onward come from MTG Stocks.

Granted the time points I selected were a bit arbitrary, but I plotted the above prices for Black Lotus and compared with the price of SPY, an exchange-traded fund (ETF) that tracks the S&P 500. The results are staggering. 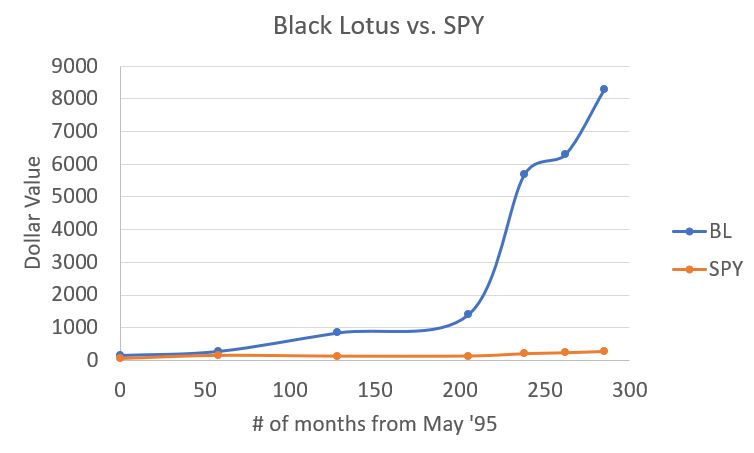 However, this is all historical data. Everyone knows past performance does not predict future returns. This brings me to the first word in my poll question that people struggled with: “good.”

Some people felt Black Lotus and other Power were good investments, but may not be going forward. After all, to experience the same percentage gain over the next 24 years or so, Black Lotus would have to be worth over $450,000. I love this hobby, but even I have a tough time seeing this happen by 2043. The price has got to level out.

If we assume the price does level out, then our expected returns from Power should be significantly lower. Perhaps gains over the next 5-10 years will only be a tenth of what they were the past 5-10 years. If that’s the case, then perhaps the investment isn’t “good” enough for some folks.

One dissenter explained how buying and selling smaller cards on a frequent basis would yield better returns than a single piece of Power. It’s certainly feasible—one only needs to average a modest 10-20% gain, and over the course of 50 transactions can churn some major profit. 1.15^50 = 1083, a pretty great return.

I’ll concede the frequent-transaction option could readily beat a piece of Power, but with two caveats. First, there’s the time component. If you have limited time and do not wish to spend it constantly flipping cards, then perhaps a piece of Power could be considered a “good” investment.

Second, there’s the risk factor. You need to consistently gain on your card flipping—one terrible pick that loses you 50% of your investment could set you back months. And what if you’re on transaction number 49 when that happens? You’d be losing a huge portion of your gains. With Power, there’s no such risk. You won’t get fast, exciting returns but it’s highly unlikely you’d be taking any losses from a bad spec, a reprint, etc. 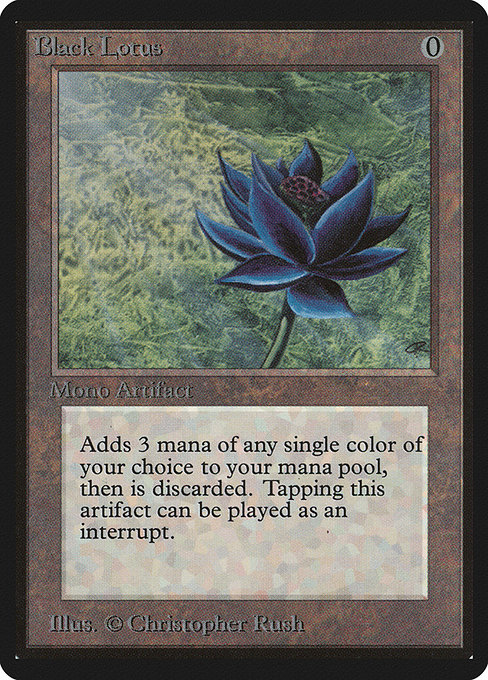 Magic cards should be played with. I do not treat them as investments.

Librarian of Leng is a well-liked member of the Old School community. His sentiment above is supported by many in the community, as evidenced by the 23 likes. Black Lotus may make people lots of money, but some may view this as a consequence of the game rather than a main purpose.

I’m not going to dive into the Reserved List debate here. It will add no value to this article. The point is that some people believe this is a card game to be enjoyed, not an asset to be treated as an investment. While I readily see both sides of the argument over the word “good,” I have a tougher time accepting the sentiment that Magic should not be an “investment.”

For instance, consider the numerous other examples of collectible items that were initially made for one purpose but end up gravitating towards investor collections over time.

Transformers toys were originally made to be played with. Yet now some in nice condition can sell for hundreds or even thousands of dollars. Does that make these toys an “investment?” Or how about something closer to Magic, such as Pokemon cards. First-Edition Shadowless Charizard sells for a ton of money, but is a game piece that was designed for play. Is this not an “investment?” 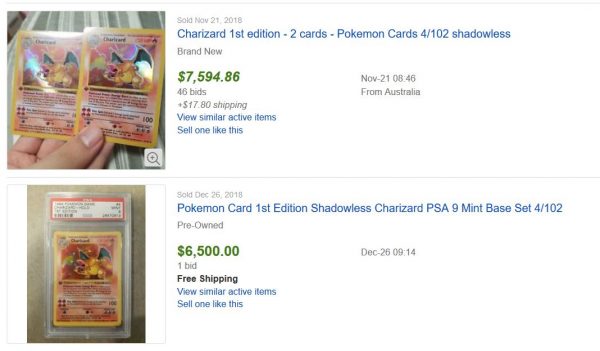 Even something as day-to-day as video games can be graded and kept in a box for investment purposes. Check out this copy of Panzer Dragoon Saga, a valuable and rare Sega Saturn game that sold on eBay.

This copy is graded and brand-new. Therefore it was never used and perhaps never will be used for its intended purpose. Why buy this game if you’re not going to play it? As an investment, of course.

The list goes on and on. I stuck to games and toys, but if you expand the list to other hobbies you can find some really bizarre non-traditional assets. If you’ve ever watched Antiques Roadshow you know what I’m referring to—that random worn-out carpet from 1800 made by someone most people never heard of that would “sell at auction” for $20,000. Try telling the owner that their carpet is meant to be walked upon, not preserved as an investment. See where that gets you.

Don’t get me wrong—I completely understand Librarian of Leng’s sentiment. Old School players love the game for what it is, and they consider people who buy up loads of copies of older cards for investing as barriers to enjoying that game. They would also probably cringe at that Sega Saturn game or Transformers toy, all cased up and unavailable for enjoyment.

They’re completely correct in feeling this way, because collectors/investors are essentially making Magic and other games more expensive. But investor demand is no less legitimate than someone who wants a card to play with—the investor just has a different objective in mind.

I created this poll to explore the sentiment of the broader Magic community. I tried to remain as unbiased as I could on Twitter so as not to sway people’s decision.

But if you were to ask me whether or not I felt Power 9 was a “good investment,” I would reply in the affirmative. I don’t have excess free time where I can shop around and flip collections, buy and sell cards constantly, etc. I do this to a lesser degree with a small portion of my collection, but if I were to put a set of Power’s worth of money into card-flipping I would quickly become overwhelmed. I like the idea of parking money in Power for the long term while also flipping a more manageable collection of cards for short-term gains.

While I don’t expect nearly the same returns on Power over the next 5-10 years as we had over the past 5-10 years, I still expect the directional arrow will go upwards and to the right. A Black Lotus will be worth more in five years than it is worth today, so that makes me happy to sit on one. I also think it will still outperform the S&P 500, though not nearly by the same margin as in the past.

As for the “investment” portion of the poll, I have defended my stance in the previous section. I do view Magic as an alternate investment, but only to a limited extent. There are some vocal members of the Magic community that have taken Magic investing to a whole new level, buying up $100,000’s or even $1,000,000’s worth of Reserved List cards.

This is not my approach. I like that my cards can increase in value over time, but I also like playing with them. To me, it’s about enjoying a hobby that also pays me over the long haul…that’s the best of both worlds.

A controversial Twitter poll has inspired me to write up this (potentially) controversial article. I declare to the community that I do, in fact, believe Power 9 is a good investment. I recognize others do not feel this way for numerous reasons. But I combine the fact that I like these older cards, appreciate their gameplay, and also want to hold them as they appreciate in the hopes of using them to offset my kids’ college costs. The result: I can have my cake and eat it too.

If you have much more time to spend then you could probably find better returns than Power as long as you avoid significant setbacks. If you just want to enjoy the game for what it is, then you will be unhappy with those who purchase large piles of these cards for the sole sake of making money. These two mindsets would cause one to argue that Power 9 is not a good investment.

At the end of the day, this is what I love so much about Magic. There are so many ways to engage with the hobby. Not everyone agrees on the optimal way to engage, but the complexity of the hobby has kept it fascinating to follow for over 25 years. With any luck, it will remain just as inspiring and we will be having this same debate 25 years from now!