Picture this. You're playing a crazy, three-hour game of Commander and the person across from you slams down a Paradox Engine. That person proceeds to combo off–and suddenly you're interested in getting a copy for yourself.

You ask, "Hey, how much was that?" and they respond, "I got it for $12 when it rotated out of Standard." You have $15 in your pocket and decide to go get one of your own, but the tag on the card says $26. What caused this card to spike? Was there an article about it on a website or did someone on YouTube talk about it?

Maybe this is the instigating event that opens the door of MTG finance for you. Whatever your instigating event was, I'm confident that you asked yourself or someone else, "Where do I start?" One way or another, you came to the right place in Quiet Speculation.

MTG finance can be daunting, intimidating, and often times very risky, but it can also be incredibly rewarding. Everyone has their failed specs (I went deep on Summoning Trap when it first came out and I still cry on the inside about it once in a while), and everyone has their success stories (those folks who bought into Arclight Phoenix at less than $3). But where do you start? How do people figure out these cards to speculate on?

That depends on what you want to speculate on, really. Do you want to spend some money as a longer-term investment for slow, low-risk gains? These are situations when you can literally set it and forget it... cards that you know will increase. A good example of this is the original ABUR dual lands.

Don't just take someone's word for it, though–do some research. In the stock world, they call it due diligence.

Why are these good longer-term investments? Several factors help provide reassurance of stability and growth. Underground Sea is on the Reserved List, so you know it won't be printed again; it's used in almost every blue deck in Legacy/Vintage/Old School; it's a collector's item for some players (who never had the chance to own them in their youth but now have a bit more liquidity in their lives); and finally its financial history shows consistent upward movement.

Plateau hits a lot of those same points, but it's not as popular of a card. In older formats, red-white doesn't fit in as many decks as blue-black, thus Plateau's growth has been slower. However, that doesn't mean it's a bad choice either. Unlimited and Revised versions of less popular dual lands are still a great thing to pick up and let sit in top-loaders or your binder.  You can take what these cards have to offer, and compare that to cards that might be great targets for long-term investments and haven't moved on the graphs yet.

Take As Foretold for example. 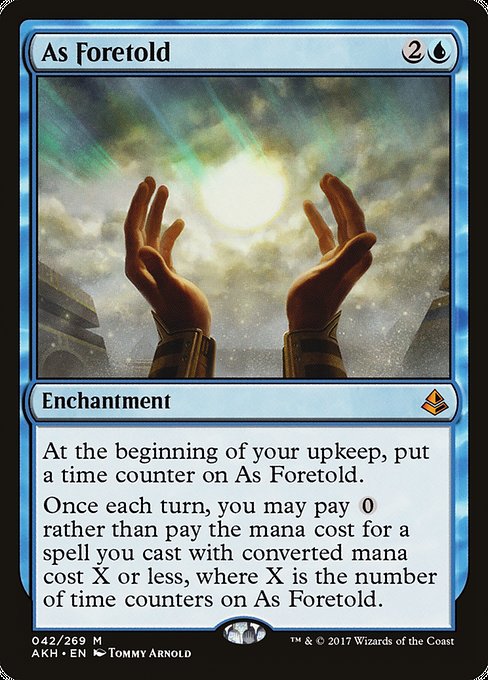 Foil cards often have a greater ROI (Return on Investment) because they have a large appeal to casual groups, Commander, and Legacy/Vintage.  Modern is also a format where players love to foil out their decks, but those cards often see a faster spike once the decks start doing well.

As Foretold has an appeal to every format that can play blue, but the biggest attraction comes from Commander and casual decks.  Being able to play cards for free is a huge deal, especially when the only drawback is... well... just waiting to put counters on the card.  It's a cheap mana cost, it's splash-able, Amonkhet didn't rotate out of Standard too long ago so the reprint chance is fairly low, and it has long-term effects for the board state.  As of the writing of this article, you can find foils roughly $20.  This card has great appeal and thus a potential to climb upwards of $40 or 50.

The other major type of speculation is short-term.

Short-term as a category is a bit broad, as it can mean cards that can be flipped within a day (whether due to random hype from Reddit, winning on camera, or SaffronOlive posting some crazy deck that goes 5-0) or cards you are waiting on for a new set (such as Mox Amber with the War of the Spark hype). If you are looking to turn them around in less than a year, it's probably short-term speculation.

This type of spec often requires a lot more research, confidence (this is important), and watching the market. Following trends is important–good places to do this are on MTGGoldfish, MTGStocks, and TCGplayer. These cards can also spike out of nowhere sometimes, especially if there is hype from Twitter and Reddit. 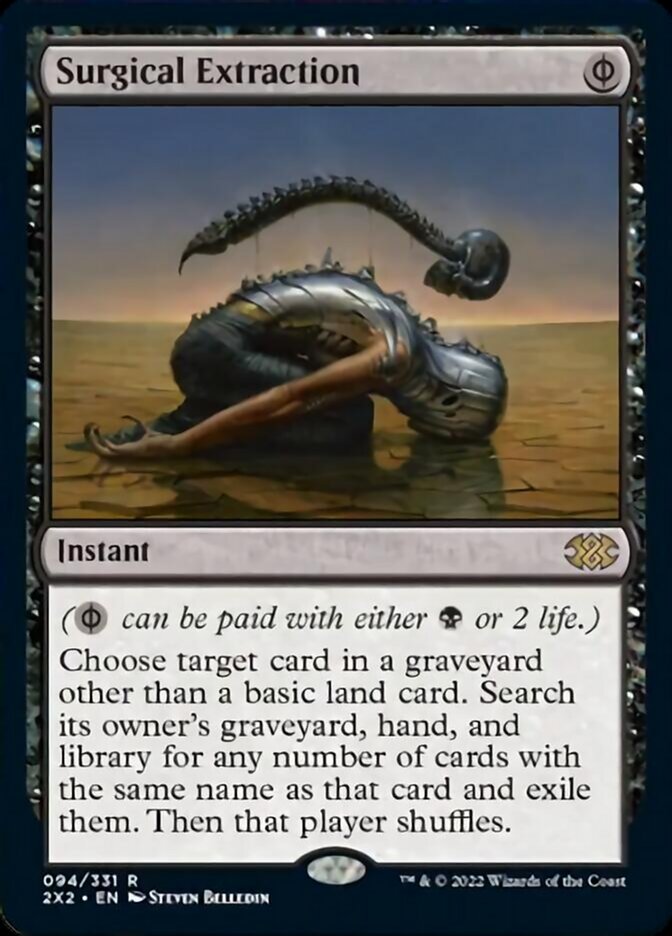 Both of these cards were set for a gain, due to the fact that they have started to become more popular in their respective formats and they lack reprints.

Surgical Extraction is seeing a ton of play related to the recent Arclight Phoenix decks that have exploded in Modern. It's main-decked by many of them to act as a free card for the Phoenix's ability as well as a way to combat the mirror match. Because of the Phoenix decks, it has also gained popularity in many other decks, as the mana restriction is almost non-existent. Any deck can afford to sideboard Surgical.

Paradox Engine is, as of writing, in 13,707 decks on EDHRec. It's an absolute bomb in Commander and fits a ton of strategies. Being an artifact also gives it the benefit of having no mana restrictions. Who wouldn't want to untap their cards whenever they cast something?  If you missed the hype train for Engine, have no fear, because we can use it to look for other great targets that have seen little to no gain yet.  What else has similar features to Paradox Engine?  I'll give you a few hints... it's an artifact, it was printed in a set recently and is still obtainable, it has an alternate printing that is desirable for Commander and casual collections, and it has an effect that could alter entire games regardless of when it is played and activated. 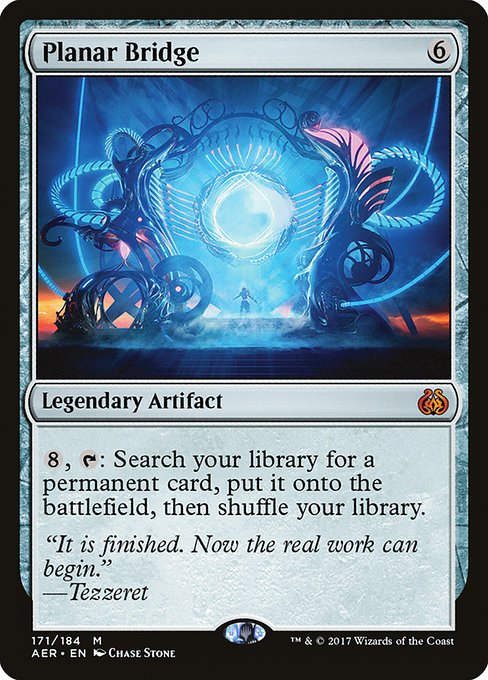 If you guessed Planar Bridge, you're correct!  This card has already started to see gains within the last week or two and will continue to see gains in the coming weeks.  Again, foils are a better target for ROI than non-foils, but non-foils will also see a bit of trending as well.  The greatest appeal towards this card though is the Masterpiece printing.  It's become quite clear that players and collectors alike have a love for the Kaladesh Inventions.  It is only in 5,300 decks on EDHRec, but that number has slowly been going up.  One of the resources we can use to follow trends and buy-outs is the number of suppliers on TCGplayer. Foils and MSP copies are being scooped up fairly fast on all major vendors and TCGPlayer, so this is primed to pop fairly soon.

Looking to the future, we have to assess the resources we have and how we can connect those to what we want to spec on.  The resources to look for these cards are all over the internet, you just have to keep an eye on them. Look for trends, common conversations, similar YouTube videos, constantly being called out in Podcasts, etc., and have faith in your specs. You have to have confidence and believe in your specs for justifiable reasons.  Recently I saw a conversation on Facebook about Mistcaller as tech against graveyard decks like UR Phoenix, Dredge, and various builds of Company. No one knows if it will work until it's tried and tested, but at almost-bulk prices (and under a dollar for foils) while being a few months from rotation... it's something to think about.

In my next few articles, I'll take a closer look at the many variables that can affect our specs, as well as how to prepare for them.  I'll also go a bit more in depth about what it means to invest in safety versus playing with different Risk Factors.  Once we have some specs lined up, we can look at how to obtain them, and the best way to make profits on them.

Thanks, everyone. I'll leave you with a few thoughts of my own for specs and finance.