While chatting with a friend who hasn't played Modern in a while about mostly unrelated topics, I was asked whether Leyline of the Void could be a reasonable consideration for contemporary mainboards . He'd become interested in the topic after reading this article. "In what deck?" I asked, believing myself aware of the card's niche deckbuilding requirements. "BGx," he answered. And with that, I set about trying to squeeze Leyline into a Jund 60. 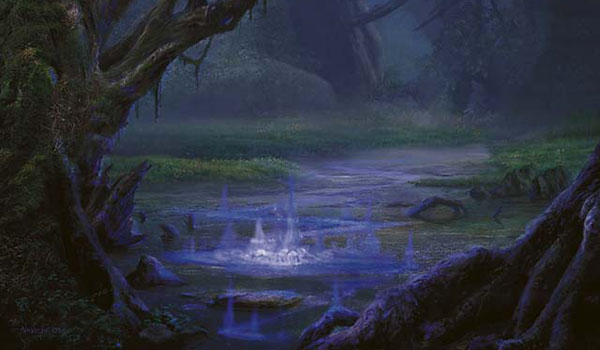 What follows is an outline of my thought process, a decklist, and the conclusions I made while building and testing Leyline Jund. It examines what Leyline requires of a deck that runs it and considers the subtle effects Arclight Phoenix has had on Modern's brewing parameters.

This brew-to-be needed to account for having 4 Leyline of the Void in the mainboard. Card selection would be appealing to prevent from drawing the enchantment; a method to cash in on copies stranded in hand was also necessary. Finally, beyond disrupting enough to compete in the aggression-slanted Modern, the deck also needed enough speed to safeguard against having such a long game that drawing Leyline became inevitable.

In summary, the deck would need:

I started with the obvious. Last time, too, that I decided to "fix" midrange decks by giving them additional proaction and card selection, Faithless Looting was a lock pretty quickly. I also wanted a way to benefit from binned Leylines, and turned to the graveyard myself.

Green was already interesting for a couple of reasons. It's long been a go-to color for midrange decks, in no small part thanks to Tarmogoyf. Goyf excels alongside a highly disruptive gameplan when pilots want to close things out relatively quickly (as in, not grind-you-to-

death slowly like UW Control does). Tarmogoyf is harder to just throw our support behind than it used to be, but this shell incidentally does a lot of things that help the green beater out. And discarded Leylines grow Goyf even larger.

Another draw to green was delirium, or Goyf's themed mechanic from the future. Ryan Overturf's nigh-undefeated Temur Phoenix deck from February integrated Traverse the Ulvenwald to frightening effect alongside Arclight Phoenix. We were already on Faithless Looting, so why not toss that plan in ourselves? Integrating Phoenix would give us the proactivity boost also needed—we'd just need Manamorphose. As for delirium, I figured a set of Mishra's Bauble would do the trick.

Black, too, is a classical midrange color. Although we don't necessarily need black-producing lands to run Leyline of the Void, the enchantment is often seen alongside Swamps for the simple reason that it's nice to have the option of hard-casting it. But factors other than pedigree sealed the deal for me on black over blue. 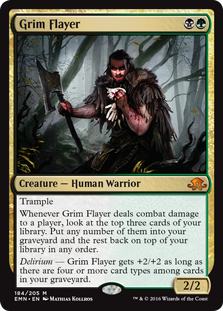 Being that I'd already committed to Faithless Looting and a beefy graveyard, Grim Flayer seemed like a good fit, and would end up being the best threat in the deck. Flayer's obvious application: he's an undercosted, trampling body. Less so: dumping Arclight Phoenix and flash-backing Lootings for random plusses; growing Tarmogoyf. Perks that only hit home after a few days of experimentation: preventing us from ever again drawing Leyline of the Void; setting up killer Arclight Phoenix turns by stacking Manamorphose into one-drop. Flayer just does everything we want our creatures to do. It even operates passably under heavy-duty grave-hate, sifting past the dead stuff (Traverse, Tarmogoyf) and finding the heavy-hitters.

Nothing says black midrange deck like targeted discard. But I actually wanted to try those spells in a Phoenix shell before being met with the Leyline Challenge. I'd observed a trend in the metagame wherein, outside of Leyline-boasting aggro-combo decks, players swapped out their heavy-duty graveyard hate (Rest in Peace, even Nihil Spellbomb) for the much-lauded (not least by me) Surgical Extraction. Opponents like to

Targeted discard also curves into and therefore naturally supports the two-drop plan, itself weak to Fatal Push (which, as David noted yesterday, is deceptively strong against Phoenix). On-theme is Collective Brutality, another Push-sniper, which has added utility here as another means to discard Phoenix or Leylines. Brutality just plays a lot of roles in general thanks to its diverse text box, something always welcomed by midrange decks, which are notorious for sometimes having the wrong answer at the wrong time.

I'd managed to fill all my requirements at this point.

4 Leyline of the Void

Some cards I wanted but ended up omitting were Tarfire and Fatal Push. The former could further grow Goyf out of the library with Grim Flayer, or from the hand with Looting. But I figured it was win-more and not worth trading in the walker-and-creature-killing Lightning Bolt; 3 damage is plenty more than 2 in today's Modern.

Push answers the most played creatures in Modern, a roster now boasting Thing in the Ice // Awoken Horror, Crackling Drake, and Pteramander. But its value drops sharply in the face of creatureless strategies such as the making-a-comeback Ad Nauseam. I wanted all our mainboard spells to be ones we could fire off at will to animate Arclight Phoenix, so Push was relegated to the sideboard. Because of its relevance in some matchups, though, it locks up four slots there.

We've mentioned the Pushes already, but another card in large numbers here is Alpine Moon. Tron continues to pose a problem for this sort of deck despite our supposed speed, and the Moons round out that matchup.

The rest of the board contains additional interaction and a set of cards included to sidestep graveyard hate: some planeswalkers and Hazoret the Fervent. I've found Hazoret devastating against the control decks that tend to employ Rest in Peace, and think it's a natural fit here.

Earlier incarnations of the sideboard packed Assassin's Trophy to deal with enemy Leylines. But I think if you expect Leyline and Rest, it's best to play something else. This deck was built with beating Surgical in mind.

One thing that makes Phoenix decks so good is their ability to proact while interacting, or to create board presence by virtue of disrupting opponents. Thing in the Ice // Awoken Horror best represents this versatility: the Horror bounces an opponent's board and hits like a truck at the same time. Similarly, hitting opposing creatures with Lightning Bolt or using Faithless Looting to dig into other forms of interaction trigger the Arclight Phoenixes in the graveyard, rewarding pilots for their trouble. 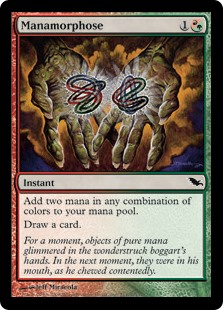 Leyline Jund has some of that going on, but less. It's still capable of the double-Phoenix nut on turn two with Manamorphose. Traverse the Ulvenwald makes such a blitz more reliable around turn three or four, by when we're likely to have delirium.

The deck's primary threats, Tarmogoyf and Grim Flayer, don't offer much in the way of interaction. They do preserve Thing's "drawback" of taking up our turn two. These two-drops make up for this failing by basically being awesome.

Tarmogoyf is regularly 5/6 and sometimes 6/7 in this deck, but Grim Flayer is the real show-stopper. I've extolled its virtues above, but want to go into more detail about stacking Manamorphose turns. Putting the instant on top makes for easy bird triggers given flashback on Faithless; all we need is a fourth land and a one-drop, meaning we can trigger Phoenix when light on cards (Izzet Phoenix has the same possibility thanks to all their blue cantrips). If that one-drop's Traverse, we can even set up another Phoenix reanimation!

As with some other midrange hybrids I've proposed, Leyline Jund ended up being too unfocused to work consistently. It proved tough to get the pieces to gel in-game; sometimes we'd start strong with Leyline into discard spell but then be drawing Phoenixes instead of two-drops, for instance. The smoothest remedy might be to axe the Phoenix package, but there are no other great options for a proactive plan in a midrange deck—we're basically just doomed to grind. Our best bet would be Scavenging Ooze, which is highly conditional and bad with Leyline.

Unsurprisingly, then, my best games involved quickly sticking a two-drop and clocking while disrupting. Arclight felt like icing on the cake when it worked, and even a bit win-more, other than in the rare occasions where I'd get the nut with Looting and Manamorphose on turn two.

Usually, tweaking builds leaves me optimistic about Modern's many possibilities. But my main insights this time around don't bode well for the format's famous diversity.

My own focus problems and self-imposed limitations aside, I found it difficult to strategize with Phoenix decks in the format. Most of what I wanted to do immediately struck me as worse or soft to the same kind of hate, leading me to adopt an "If you can't beat 'em, join 'em" mentality and pack the bird myself. I think that with such an effective xerox deck in Modern, the parameter bar is raised significantly on brews, making it harder to innovate something worthwhile. If I'm right, and not just bad, that take clouds Phoenix's potential future in terms of artificial format adjustment (read: bannings). But perhaps its share will dwindle and I'll come to see it as less of a threat myself, as David recently posited in light of the deck's (apparently outlier) Regionals successes last weekend. 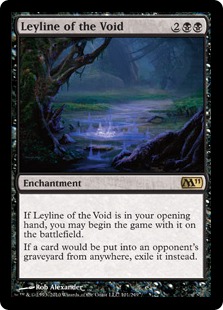 I did come to one conclusion I think might have been obvious to some readers before I even started, and one I feel confident about asserting after this experiment: Leyline of the Void does not work in the mainboard of midrange decks. I think there might be a case for maining it in some decks, but those decks are almost always aggro-combo. The faster the game is over, the less we feel the pain of having functional dead draws. Keeping a great hand without Leyline that happens to get disrupted guarantees trouble if pilots aim to go long. I think this aspect of the card explains why we rarely see Leyline in midrange decks at all, even in the sideboard, while it's a common player for more aggressive decks like Hollow One.

Live to Rise Another Day

As with all my experiments, goofing around with Leyline in a Goyf deck was, at least, a hoot. If you have any crazy ideas yourself, drop me a line in the comments—any challenge that piques my interest is at least worth a decklist!