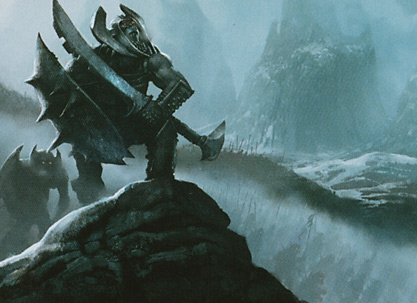 We’re in the midst of a very exciting time for Magic, and it’s being reflected by the market. Everything from the popularity of Magic Arena, to the debut of Magic as a serious esport, to exciting releases like War of the Spark and Modern Horizons, has created a buying frenzy.

Prices have increased on a wide variety of cards, and more to come are likely. When so many cards are rising, how do you predict the next card to rise? There are endless cards to consider, nearly as much information out there to sort through, and of course plenty of opinions if you’re looking for them.

It’s impossible to know everything, but I’ve found there are some good clues available that can inform buys. Last week I encountered some clues and used them to inform some of my own specs, so today I’ll explore my process.

I try to keep it simple, and one obvious thing to look for is when a foil version of a card spikes. Feather, the Redeemed has spurred a ton of Commander spikes. The foil versions of these cards tend to move first, since they are the juiciest targets for early adopters in the know.

In the case of a card like Mirrorwing Dragon, the foil spiked on April 9th, two days before the nonfoil spiked April 11. I anticipate similar movement on other spiked foils, which is why I’ve taken interest in Veilstone Amulet.

The card's foil spiked last week past $15, but the paper version is still under $1. It’s already showing signs of creeping up, and I see plenty of upside on this Future Sight rare. So far it doesn’t seem to be catching steam as a staple of the Feather, the Redeemed deck on EDHRec, and it’s not going to explode like Mirrorwing Dragon, but I don’t see much downside.

I picked up a couple dozen played copies in the $0.50-$0.75 range, and expect I’ll be able to turn them around for a couple bucks at some point this year. At worst, in that condition they are currently buylistable for $0.40 or $0.50. 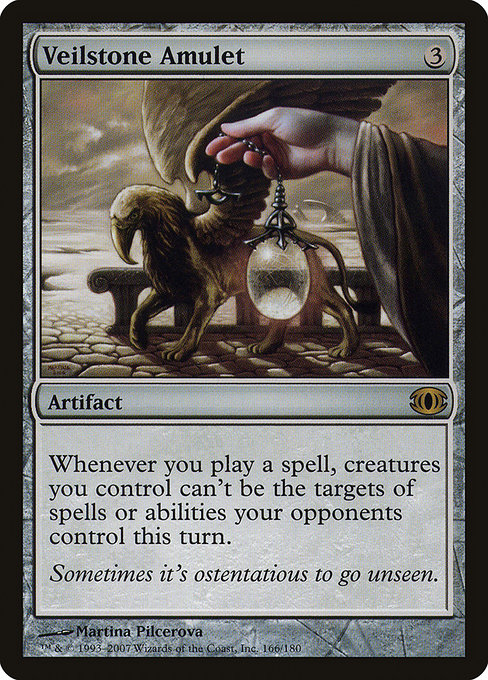 Another place to look for clues is Magic Online price movement. Its metagame moves faster than paper, so it tends to predict the future of paper. An increase in price and popularity there could precede a paper increase.

This week I couldn’t help but notice the spike of Fury of the Horde. I see two factors driving the price increase. One is that it’s part of the Narset, Enlightened Master combo deck that Magic Pro League Member Piotr "kanister" Glowgowski hyped last week, a deck that becomes better with the London Mulligan rule.

Two, it works well with Ilharg, the Raze-Boar for getting an extra attack out of whatever it puts into play, an interaction that could be used in Commander or even Modern. This puts a lot of pressure on an obscure and cheap card, and the price is already showing clear signs of increase.

Fury of the Horde

It does have a reprint that will help keep the nonfoil price in check. But if Fury of the Horde were to break out in Modern, like at the upcoming Mythic Championship, the price would likely explode. I like its prospects, so I searched online for the cheapest copies available and picked up a few dozen of the two versions under $2. Both look to be growing since, so I’m confident they’ll continue to grow and give me a good selling opportunity before long. 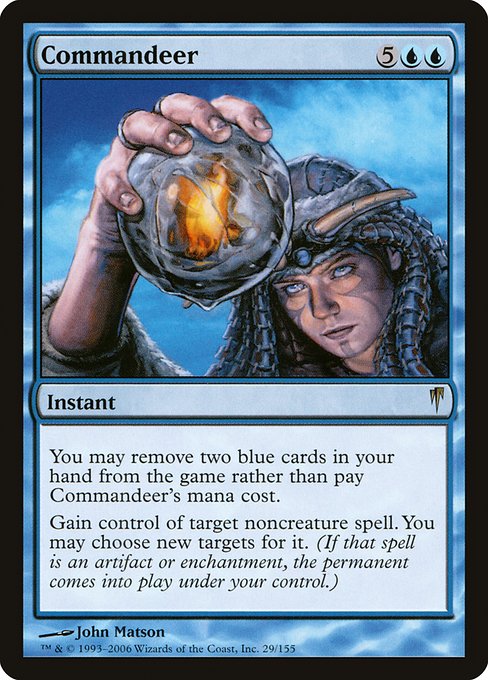 In the same cycle is Commandeer, which also spiked on MTGO last week. This might be attributed to the fact that a new style of Mono-Blue deck appeared and 5-0ed a league with three-of in the sideboard, but I believe the card has become better in general due to the London Mulligan.

The biggest winner from the change seems to be Urzatron, and players will have to take increasingly extreme measures to beat it. Commandeering a Karn Liberated is a huge blowout that Tron has little counterplay against, so I could see it rising in popularity as a way to beat the deck.

It’s a very unique card with low print run, and I think if it became any sort of real Modern staple or broke out in London the price would skyrocket. That plus its low chance for reprint and casual demand mean I like its future. I also like its relatively high buylist price. I moved in on a few playsets of near-mint copies at $7.50, with a buylist price of $5.50. It looks like it’s already nudged up and I can sell for $6.40, so things are looking good.

The most reliable way to speculate is to follow the metagame and determine the direction it is headed. The most important factor for the competitive metagame right now is the London Mulligan rule. It debuts at the Pro Tour this weekend, but it’s already live on Magic Online. It’s too early to tell the true impact of the change, but by looking at results it’s clear there are some shifts occurring.

Tron seems to be a big winner from the London mulligan rule, and the prices of its staples are increasing online accordingly. For that reason I like picking up paper versions of any Tron staples.

Another approach is to target anti-Tron cards. Fulminator Mage looks like a great target in this vein. It was once a $40 card—the Ultimate Masters version looks like a tremendous bargain at $8. 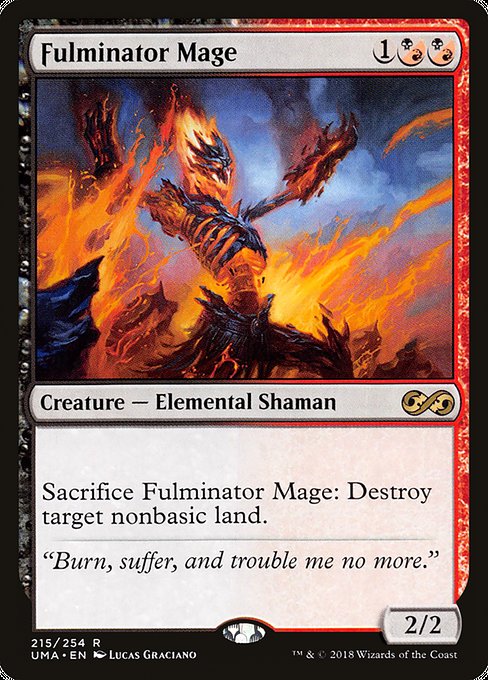 Now is probably also a good time to pick up Alpine Moon for the long-term at its current price below $1. 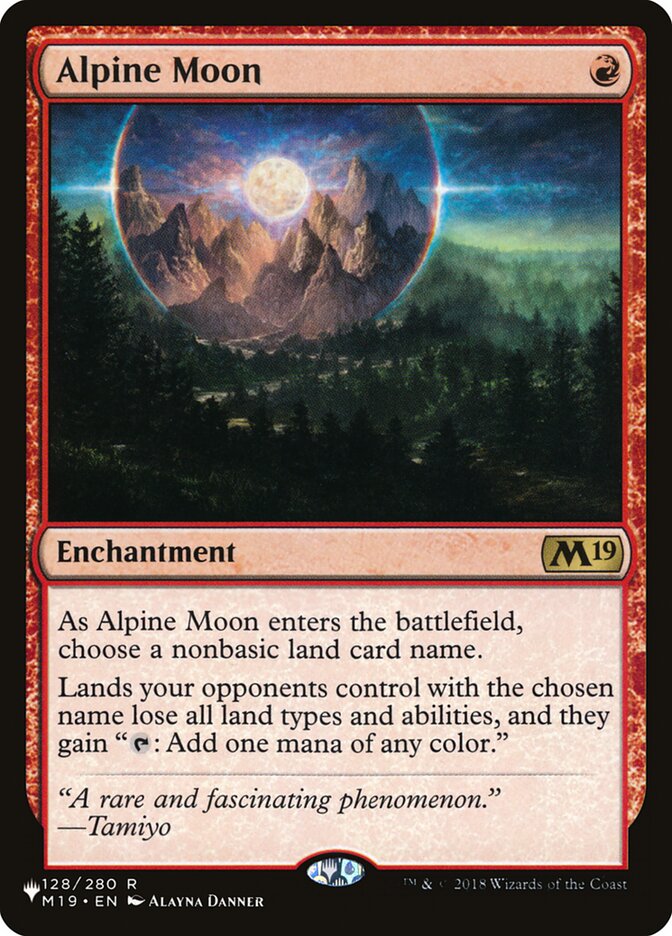 Finally, there has been a steep increase in Colorless Eldrazi decks, which take advantage of Serum Powder and Gemstone Caverns. While there may be more to grow on these cards, they have already seen spikes.

For that reason a better investment might be in the Eldrazi creatures themselves. These have all been relatively cheap for a long time, and are bound to start growing eventually. Thought-Knot Seer is actually up $1 to $7 in the past six weeks, so surpassing its previous high of $9 a year ago seems likely.

One thought on “Identifying Specs in a Noisy Marketplace”