Welcome to the MTGO Market Report as compiled by Matthew Lewis. The report covers the fundamental speculative strategies that anyone can use to build an MTGO portfolio and harvest tix from the digital Magic economy. The three fundamental strategies involve foil mythic rares, in addition to full sets and boosters of the most recent draft format.

In the midst of this change, there was a market panic in December as the announcement regarding the future of professional Magic didn't mention MTGO, even though esports was the story they were pushing. Although that announcement triggered the panic, priming the market was the Channel Fireball article earlier that week speculating on the death of MTGO at the hands of Arena.

Market panics have come and gone in the past and this one was no different. Although the economy has not fully recovered, the buy price for tix is still below its long-term average of around $0.90. Nevertheless, stability has returned. Below I will detail the changes to the MTGO economy and their impact on the fundamental speculative strategies for foil mythic rares, full sets, and boosters.

To illustrate the changes, have a look below at a chart of a full set of Dominaria (DOM) while it was being drafted (all charts are courtesy of Goatbots). The price starts out at over 200 tix but quickly drops off during release week. The overall trend is down while the set is being drafted, and the price bottom of 74 tix occurs on July 6, 2018 just as Core Set 2019 (M19) is released on MTGO. 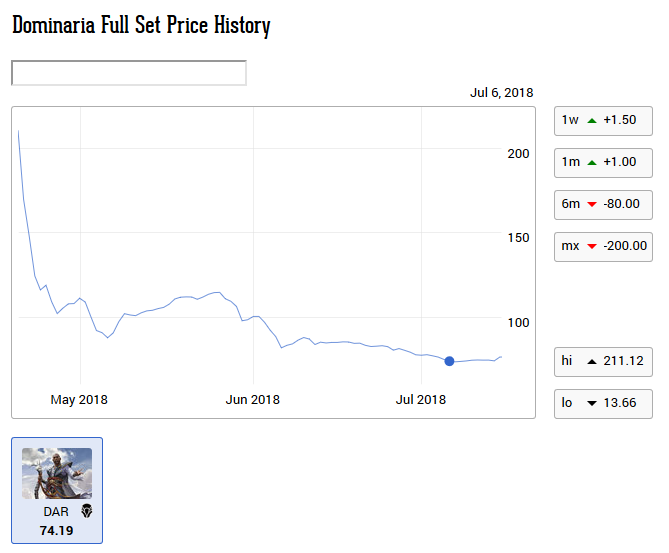 This overall pattern is the result of a tussle between limited players injecting the market with supply on one hand, and redeemers and constructed players removing supply on the other. Based on the observed trends, the supply of cards from limited players was the dominant factor for DOM specifically, and this is true more generally of most sets in recent memory.

Now let's take a look at what happened with GRN. The same chart is reproduced below, that being the price of a full set of GRN while it is being drafted. Instead of the downward trend over time, we see a gradual increase. In fact, the set price of 104 tix when RNA was released on January 16, 2019 was higher than at any other point outside of its release week. 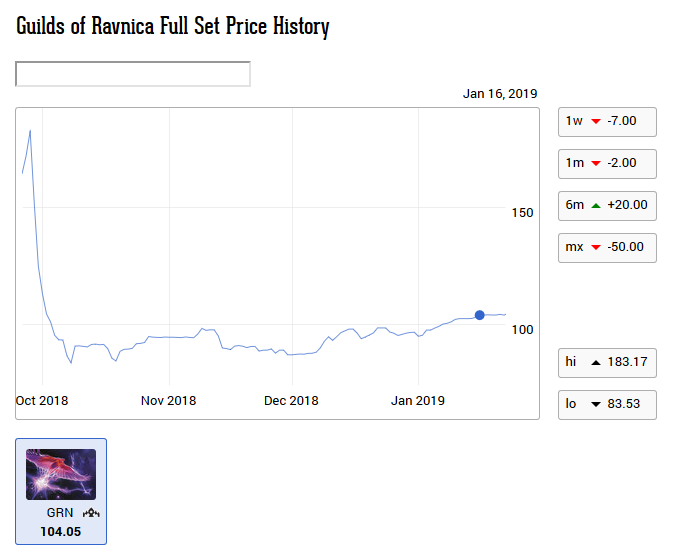 The other result is that with more stable set prices, a new area of speculation has opened up. In exactly the same way as the foil mythic rare strategy, it makes sense to pursue buying regular mythic rares as well. Have a look at the two charts for mythic rares with large price gains as a result of this dynamic. The first is Modern staple Arclight Phoenix, the second Modern playable Kaya, Orzhov Usurper. 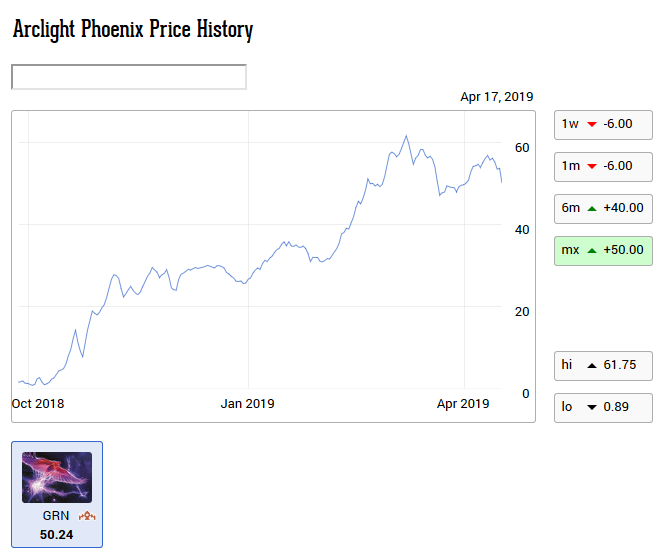 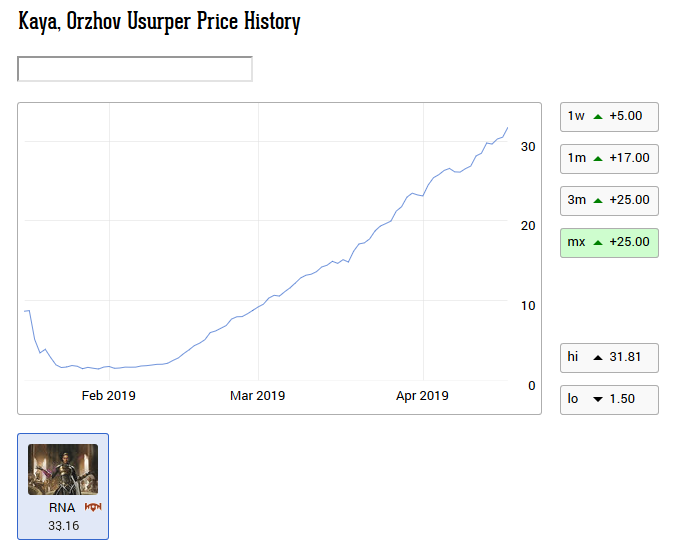 It's not just the constructed-playable mythic rares that can see big gains either. Have a look at the price chart for Captive Audience. It reached a price below 0.50 tix after RNA was released and it's basically been on a steady incline since then. 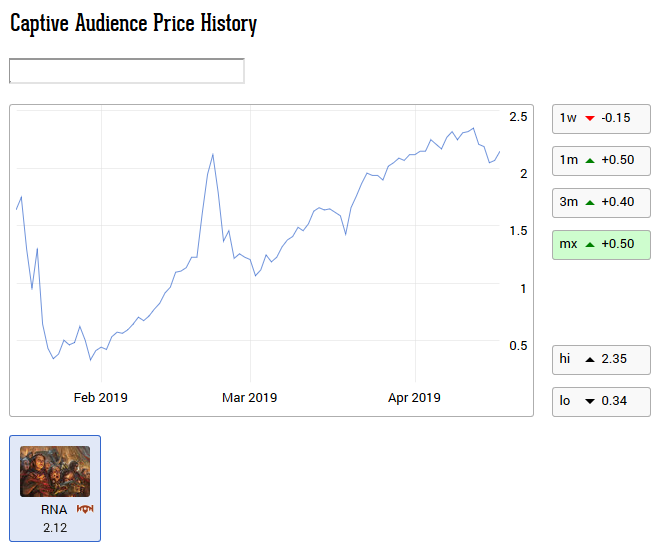 I experimented with a strategy around nonfoil mythic rares for RNA. I will detail some loose guidelines for employing this twist on the foil mythic rare strategy, but first let's revisit the original three fundamental strategies. I'll provide an update on how they have fared, with the outlook of using them for the release of War of the Spark (WAR).

This strategy worked very well for GRN. Once I identified and avoided the seeded-booster mythic rares, there was lots of opportunity for picking up foil mythic rares at relatively cheap prices. The average price was around 20 tix per copy. I ultimately ended up selling at an average price of 28 tix for a gain of around 40%.

Unfortunately the market has been catching onto this trend and the prices for RNA foil mythic rares not in seeded boosters started at a much higher level. It was so high that I didn't actually pursue the strategy for that set, although I have a secondhand report from another speculator who employed the strategy. They achieved a modest return of 7%, which is a low return overall for this strategy.

If these anemic returns are the new normal, then the strategy will be still be suitable for players as a way to preserve value, but speculators will have to consider their opportunity cost of pursuing this strategy.

At this time, it looks like the seeded boosters will not be a part of WAR release leagues. This removes some uncertainty from the strategy. Supply of foil mythic rares is typically very thin in the early days of release events, so you'll have to spend some time to scour the bots for foil mythic rares if you are considering this strategy.

As discussed earlier, the full-set strategy must be put aside as a fundamental strategy for the time being. Without being able to reliably predict a price bottom, buying full sets is a gamble that hinges on Constructed playability. If you are a master of the metagame this strategy might be for you, but I will not be pursuing it for WAR.

If the price of a set of WAR drops to 80 tix, then I would examine the differential between paper and MTGO prices to see if WAR is underpriced. Both GRN and RNA have stayed mostly in the 95-to-120 tix range, so a price of 80 tix would have enough margin of safety to get me to take a closer look. At prices higher than 80 tix, the potential returns and the risks do not favor speculation.

The booster strategy is alive and well, and GRN draft sets yielded a 26% return. The average buy price was 5.4 tix per draft set, and I was able to sell over 100 draft sets for an average price of 6.8 tix. The price peak for GRN boosters after the release of RNA was 3 tix a booster, or 9 tix per draft set, so potential profits were actually much higher.

This strategy will continue to work and I will be employing it with the release of WAR. Once the new set is released, I will look to purchase up to 200 draft sets of RNA for a price of 6 tix or less.

The key to this strategy is not to get antsy and start buying or selling too early. Definitely do not buy any RNA boosters prior to the release of WAR, and you must wait until at least June to consider selling. Prices will stay depressed until drafters start picking up cheap boosters to enter the RNA draft queues—this process can take a while to gain traction in the weeks after a new set is released.

As introduced above, this strategy is similar to the foil mythic rare strategy. We rely on a relatively stable price per set, demand from redeemers, and the fact that mythic rares are the choke point for redemption. With these factors in place, buying mythic rares early in a set's release is a good speculative strategy. Unfortunately, it requires a bit more subjectivity than the other strategies, so I will try to highlight some aspects of the strategy as I understand it today.

For pure junk mythic rares, look for a price in the 0.5-to-1.0 tix range, but basically be willing to buy as much as you can of any WAR mythic rare below 0.5 tix. From RNA, these were cards like Captive Audience, Emergency Powers, and Rakdos, the Showstopper. They all eventually settled into the 1.0 to 2.0 tix range, yielding substantial profits in percentage, if not absolute, terms.

Next up will be the cards that have some appeal but are generally not considered good enough for constructed play. These will typically be in the 1.0 to 3.0 tix range.

From time to time the market will mistakenly put a Constructed-playable card into this category. This is what happened to Kaya, Orzhov Usurper, as it was priced at under 2.0 tix in the weeks after RNA's release. That is an unusual outcome—a card like Domri, Chaos Bringer is more typical, reaching a bottom of 2 tix and rising to close to 3 tix over time.

The third category contains cards that are Constructed-playable. At some point these will range in price from 3.0 tix to 5.0 tix. These are cards like Biogenic Ooze, Seraph of the Scales, and Spawn of Mayhem. Depending on how the Standard metagame unfolds, these can have quick price spikes that should be sold into. It's also possible that some of these will see lower prices over time, and could result in losses depending on the purchase price. These are worth buying but returns can be unpredictable as a result.

Lastly there's the Constructed staples that start out at prices of 10 tix or higher, like Hydroid Krasis and Prime Speaker Vannifar. Generally speaking I would avoid speculating on cards in this category, as the Standard metagame is too difficult to predict for me. Avoid buying the most expensive mythic rares and stick to the lower-priced ones if you want to employ this strategy.

Having said that, after a set has been available for a month or longer, the dynamics of the market are such that price trends on the most expensive mythic rares tend to continue. Hydroid Krasis and Kaya, Orzhov Usurper are great examples. Over time, Hydroid Krasis has been bleeding value while Kaya has been gaining value.

Demand from redeemers means that the value in mythic rares will increase over time, and player preferences are revealing that Kaya has much more in-game utility than initially thought. Don't be afraid to ride these trends out as long as they appear to be continuing.

Of course, buying early and riding the whole trend out would have been best in hindsight, so I am trying to take a lesson from this new type of trend.

The MTGO Economy and the Future of Speculation

Although the MTGO economy took a beating this winter, the bounce-back in Modern singles in the past few months has been substantial. There is still life in this old platform despite the rise of Arena. As long as players are drafting on MTGO and redemption exists, then the fundamental strategies as outlined here will yield profits.

Just remember that consistent profits can be found if you observe the big trends in the MTGO economy. Follow the fundamental strategies. Deploy tix in the weeks after a set is released, as this is when tix are worth the most.

In order to be able to deploy tix, you'll have to be a seller at some point—so be sure to sell your cards and boosters in advance of a new set's release. Sell your Modern cards during cyclical peaks, and don't be afraid to rebuy them in the fall, a typically low-demand time of year.

And if there's a market panic, get your tix ready to take advantage. It's not every day you get to buy staples like Polluted Delta for under 2 tix, but that was the card's price during the depths of the December panic.