Is it Magic Core Set 2020 spoiler season already? Weren’t we just celebrating the success of War of the Spark? And then there was that supplemental set in between that catalyzed massive buyouts of the most unlikely of cards. 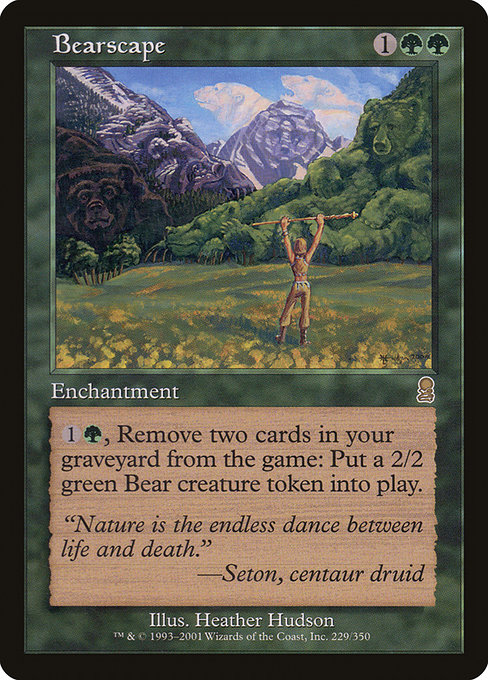 How is anyone keeping up with the flow of new, impactful set releases? I know this period of activity was scheduled in advance, but I honestly never considered the implications of this back-to-back flow of information. Keeping up has become difficult both from a mental capacity and wallet capacity standpoint. Whether you’re purchasing boxes or singles from the new sets, or you’re speculating on other cards as new spoilers are released, how does anyone have any money left?

Perhaps these sets are all going to cannibalize one another in some capacity. Perhaps the amount of War of the Spark product to be opened is going to be negatively influenced by Modern Horizons’ release, which in turn will be held down by Core Set 2020. This is a real possibility, and if events do transpire this way, then I have some low-risk ideas worth your consideration.

War of the Spark – Planeswalkers Galore

Themed around Planeswalkers, War of the Spark has a fairly impressive list of interesting cards that could benefit from a potentially lower open rate. I want to focus on the Planeswalkers, specifically. There is one in every pack, and depending on whether you’re opening English or Japanese product, you could open a Planeswalker worth $0.05 or $1000.

At these prices, Japanese booster boxes of War of the Spark contain the most valuable cards in the history of Standard legality. But I digress…

My point here is there are many Planeswalkers in this set, and players love their Planeswalkers. As this game becomes more and more dominated by the casual player, these are surely going to be a hit. And if less product is opened due to hype around subsequent sets, then perhaps sitting on some Planeswalkers from War of the Spark for the long haul isn’t such a bad idea.

Where should one park money, though? This is what I love most about the set—there are numerous options that fit into anyone’s tastes in Magic. If you love bulk, you could buy up hundreds of the cheap, uncommon Planeswalkers. Better yet, you can purchase some of these in foil. With a recent eBay coupon I picked up a few foil Vraska, Swarm's Eminence—not because I think this particular Planeswalker suddenly breaks out, but because I like the assassin creature token theme from a casual standpoint. But really, it doesn’t matter. All of these should gradually climb over the next few years, and having a diverse basket of foil Planeswalkers should pay out regardless of what you choose. 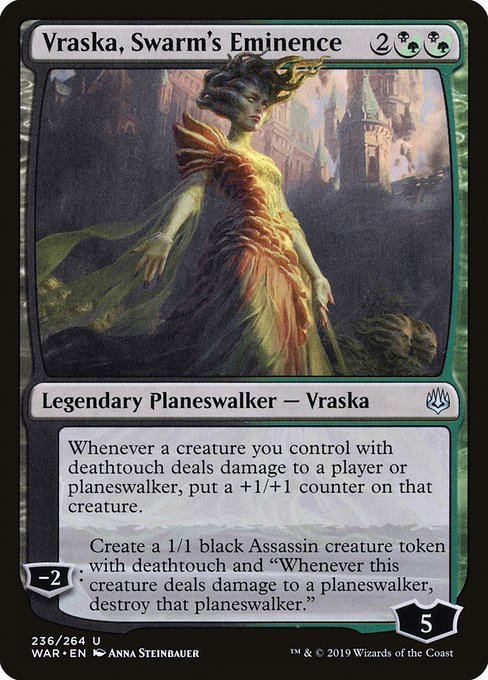 Other attractive options include foil Ashiok, Dream Render, Saheeli, Sublime Artificer, and Kasmina, Enigmatic Mentor. Even non-foils at near-bulk pricing would be fine to sit on as a buylist play a couple years from now. If you are ok with spending a little more money, aiming for the rare Planeswalkers, such as Tamiyo, Collector of Tales or Ugin, the Ineffable may pay off well over time. Especially if you look at the rarer alt-art Japanese versions. 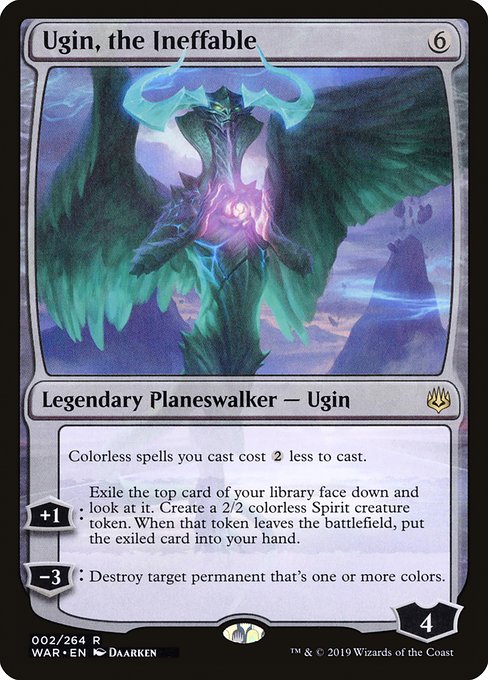 If you don’t want to sit on loads of cheap cards, look no further than the alternate-art Japanese Planeswalkers. You can go for the glory and purchase a foil Narset, Parter of Veils which is likely to be valuable for years to come. Or you could pick a lesser card whose artwork you particularly appreciate. Again, I think you really can’t go wrong here—much like Masterpieces, these will be rare and only become harder to find going forward.

Lastly, if you want to play it safest of all, you could purchase a few Japanese War of the Spark booster boxes to sit on. I personally don’t deal in sealed product anymore because storing and shipping them is a major pain. It looks like there are numerous boxes for sale on eBay from Japanese sellers, with prices that hover around $165. I’m not a gambling man, but cracking one of those foil Lilianas in a $165 box seems like the ultimate Magic payout. Who knows how many people will be willing to take that gamble a few years from now?

Even though Modern Horizons is not a “limited print run” set, I wonder if the higher price tag and the overlap with War of the Spark and Core Set 2020 will limit interest. I’m seeing tweets from multiple MTG finance people reflecting this sentiment. 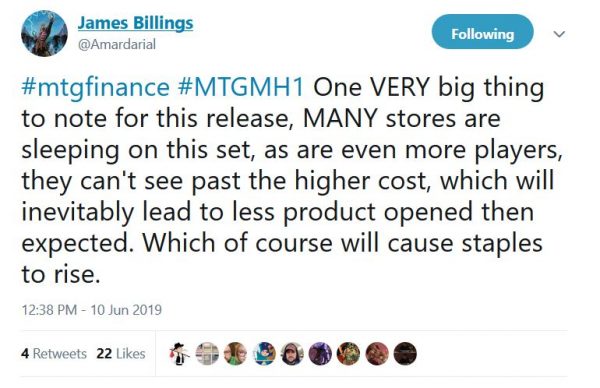 This leads to an interesting result. When a masters set doesn’t get opened as much, the harm is minimal because the entire set is filled with reprints. The supply on the overall market for those reprinted cards can only increase, making prices drop at least for some period of time. But when you have an under-opened set with unique cards relevant to Modern—cards that aren’t reprints—the price implications can be surprising.

I know the set just came out, and prices may steady, but I can’t help but wonder if the long-term EV of this set will be very high. Right now, there are 19 rares/mythics in the set worth more than $10. This could fluctuate as we approach peak supply, but how big will that peak actually be? Once Core Set 2020 is released, how quickly will this set be forgotten?

But if the set will be forgotten, why invest in it? Well, the set may be forgotten but the most impactful cards from the set certainly won’t be! Think of the most impactful Conspiracy cards in Legacy and what their price trajectory was. Leovold, Emissary of Trest was worth $50 for the longest time before being reprinted in Ultimate Masters. 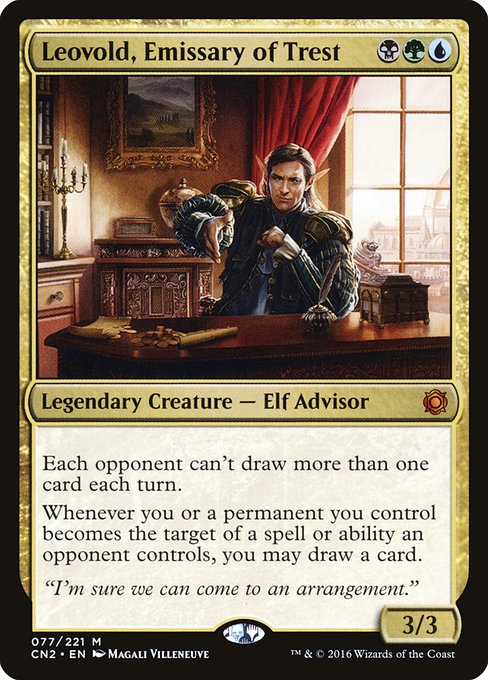 Council's Judgment is a $20 rare from Conspiracy based on a little Legacy demand and a modest Commander demand; foils are through the roof due to their rarity. And let’s not forget Expropriate, a $50 card from Conspiracy: Take the Crown.

When Wizards releases so many sets back to back, it can be overwhelming both from a mental and wallet capacity standpoint. Even if I could keep up with all the new releases, I couldn’t possibly buy into every product with any significance.

I suspect others will be in the same boat, and that means there will be major potential for gains a few years from now. The community will realize the most desirable cards from War of the Spark and Modern Horizons are quite rare. But if they have a profound impact on non-rotating formats like Modern, Legacy, and Commander, then their price tags will continue to climb. It’s difficult to envision right now because we’re around peak supply. Just wait six to twelve months, and the real rarity of these cards will start to show.

For me, I like foil low-end Planeswalkers from War of the Spark. I think they’re quite neat from a casual player’s perspective, and this should help prices slowly climb over time. Alternatively, I’m also considering an acquisition or two of the alt-art foil Japanese Planeswalkers because I believe these will be exceptionally rare a couple years from now. I don’t want to purchase during peak hype, but I don’t know if prices will be dropping on these any time soon.

From Modern Horizons, I can’t recommend specific cards until I see the Modern metagame unfold further. I love all the Snow builds players are attempting, and I did pick up a few cheap Dead of Winters recently. I don’t know if these will pay out, but a pseudo-Damnation could go a long way in helping a B/U/x control strategy manifest itself in Modern. The Horizon Canopy lands could also be a wise investment, especially in foil. I’ll be following the QS Insider Discord to see what deck-lists are catching folks’ attention and speculate from there.

While I can’t pinpoint the best cards to buy into, I am confident in one thing: cards from War of the Spark and Modern Horizons have a great deal of potential, and I will want to be involved with the price action in some capacity no matter what.