Despite all the hype during Modern Horizons’ release, it appears most prices from the set had not yet bottomed out. This was an incorrect call on my part, and I suspect other speculators were in the same boat. Demand seemed strong enough to keep prices up, but as interest in other products and sets waxes, Modern Horizons demand has waned. 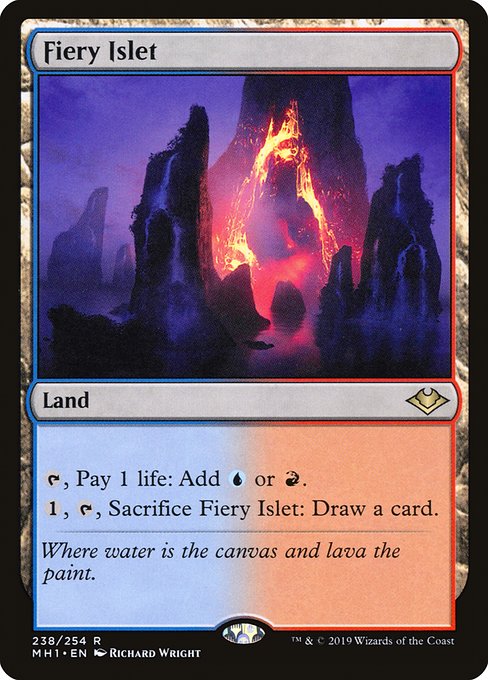 While Wrenn and Six’s price remains fairly strong, some of the rares in the set continue to drift lower. Now that prices are a bit lower while demand softens, the big question is: what’s the next action to take? Have we bottomed out now, such that acquiring the playable, underappreciated cards from the set is a wise move? Or is there more downside? Let’s take a look at some of the data!

Others may have noticed this a long time ago, but it appears that Card Kingdom only stocks eight copies of a new card at a time. Skimming their inventory, I see they have exactly eight Near Mint copies available to purchase of so many key Modern Horizons cards: Wrenn and Six, Force of Negation, Urza, Lord High Artificer, Prismatic Vista, Seasoned Pyromancer, etc. The list goes on and on.

In fact, for every single rare and mythic rare from Modern Horizons, Card Kingdom has exactly eight near mint copies listed for sale. Every. Single. One.

What does this mean? We all know this isn’t the greatest coincidence of all time. Card Kingdom is carefully listing copies for sale so they aren’t subject to a major buyout. By selling just eight copies at a time, they’re able to adapt to sudden shifts in price. But this also means Card Kingdom has more than enough copies of most Modern Horizons non-foils.

How do I define “more than enough”? This is admittedly a loose, unquantifiable term. In reality, the quantity is going to vary significantly from card to card. But if you check out Quiet Speculation’s Trader Tools website (mtg.gg) you can view the precise quantity Card Kingdom has in stock. For example, it appears they have 593 copies of Fiery Islet in stock. 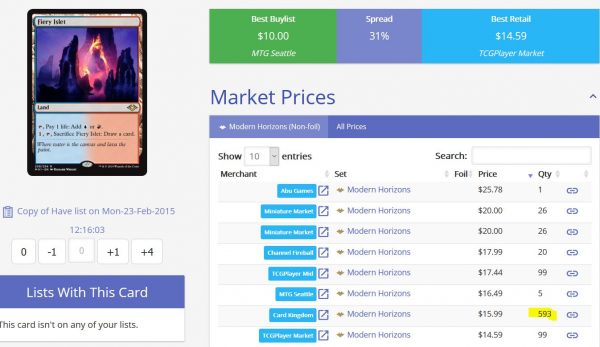 Meanwhile, they “only” have 249 Urza, Lord High Artificer in stock. I could go on, but I think you get the point: supply is deep. And remember, this is only at one vendor! You also have supply at other major vendors across the globe, as well as TCGPlayer, eBay, etc.

Contrarily, the stock on foils is much more modest. Card Kingdom only shows having ten copies of foil Urza, Lord High Artificer in stock. This is a much easier quantity to sell through versus 249! 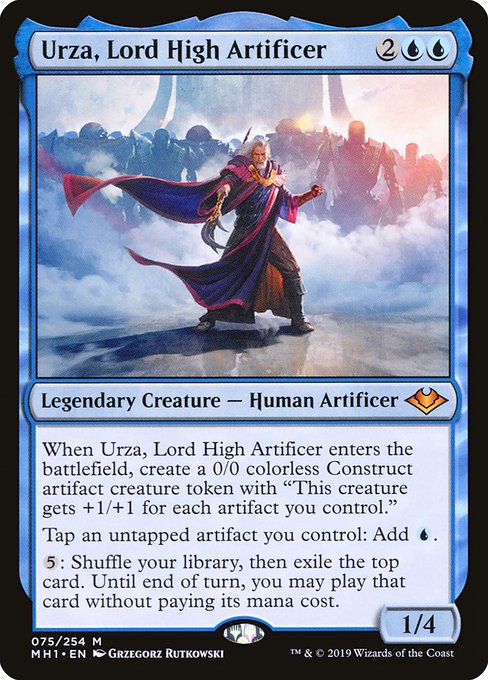 With stock running so deep on nonfoil Modern Horizons cards, it appears foil copies are much more likely to rise in price in the near term. Card Kingdom does have reasonable stock of most foil cards from the set, but they have pockets of lacking. For example, Card Kingdom only has one copy of foil Wrenn and Six in stock ($379.99). They are completely out of stock of foil Nurturing Peatland ($59.99) and Plague Engineer ($44.99).

If we still haven’t seen a bottom in Modern Horizons cards, I’d predict the bottom will occur first in foils long before it occurs with nonfoils. And in some cases where demand is particularly strong, the bottom may have already happened when the set was released. Not many could have anticipated Wrenn and Six would have been so popular, and foil prices may never return to pre-order levels again. The same can be said of Plague Engineer.

An advanced search on TCGPlayer further underscores the low stock of some foils versus their nonfoil stock. Dead of Winter is the second most popular seller on TCGPlayer of late (behind Hogaak) and there are 209 listings for the card. Only 27 of those listings are foils. Even sparser is Plague Engineer. There are 157 listings for the card—not a huge amount considering how new the card is—and the foil listings total only 18!

Based on this data, the expectation is clear: foils are the way to play Modern Horizons unless you’re willing to accept a multi-year wait period. Could some non-foil mythic rare spike due to a sudden shift in metagame? Certainly. But until the next round of Modern bannings, the Modern metagame is fairly stuck in place. Given this, my recommendation is to only look at picking up Modern Horizons foils for now, and revisiting non-foils that may jump in popularity once the Modern metagame shifts (possibly upon the next B&R announcement).

Ready to Move On?

What if I’m sitting on Modern Horizons cards because I thought the bottom was already in, and now I’m stuck holding cards with falling prices? What should the move be?

First, a choice needs to be made: is the opportunity cost of sitting on these cards, which may be dead money for quite some time yet, too high? This is a case by case assessment that must be done by each individual. In my case, I despise speculating on cards with the anticipation of easy profit only to be left holding such cards for months with no price appreciation. I’d much rather liquidate immediately and put that money to work elsewhere. I could always revisit these Modern Horizons cards should stock begin to thin and the price starts to bounce.

If you’re in the same boat and you’re ready to cash out and move on, then I have some ideas on how to approach liquidation while minimizing losses.

First, I noticed ABU Games has some pretty decent credit numbers on some Modern Horizons foils. For example, they offer $75 in credit on a near mint Serra the Benevolent. 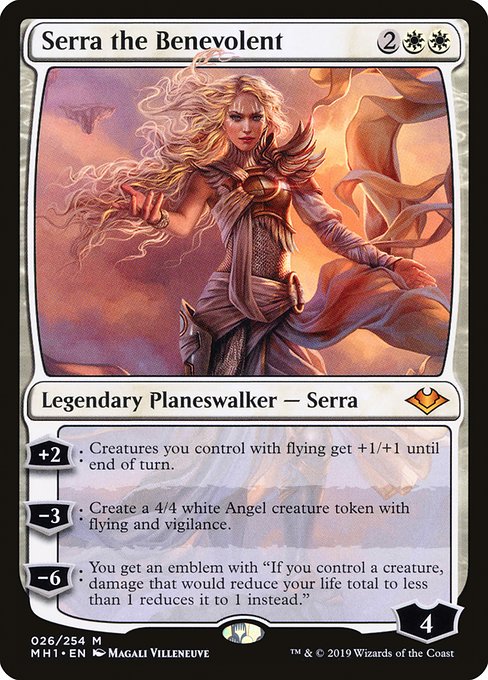 I picked one of these up in a brief moment of emotional weakness because I thought they were selling out everywhere. Clearly, my purchase was premature (when you’re early, you’re wrong!) and I’m stuck holding an overpriced copy. I could sit on it and wait for its price to rebound, but I’d rather put this money to work elsewhere where I anticipate better returns. ABU Games may be an attractive out if I can find something reasonable to acquire with the credit.

The same can be said about foil Morophon, the Boundless. This was a pick on a Quiet Speculation podcast and the community (including myself) swarmed in! As it turns out, this wasn’t a spec that could net you immediate gains like I had hoped. Yet again I’m faced with the decision: do I sit on these foils and hope for a catalyst, or do I cash out and free up capital. If I decide upon the latter, I could ship to ABU Games for $70 in credit—this is more attractive than the top cash buy price of $32.24 (also ABU Games). 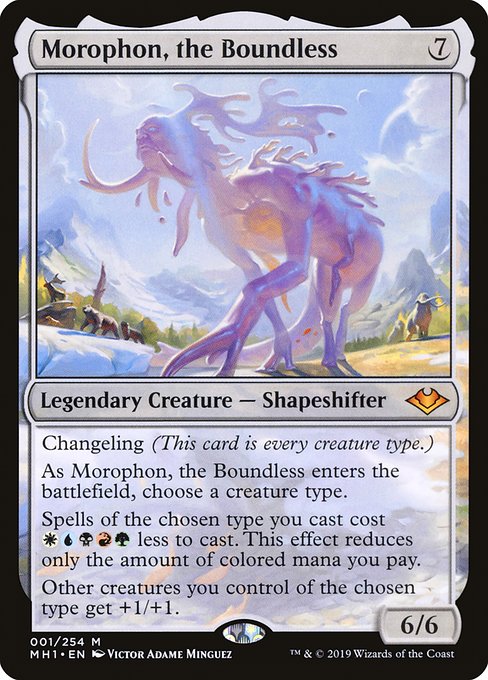 Some nonfoils are better sold to ABU Games for credit as well. Fiery Islet can buylist to $10 cash to MTG Seattle, but this feels like a disappointingly low number considering this was a $20 card not long ago. With ABU Games, you can at least salvage $17.40 worth of store credit for the card. Of course, you won’t get $17.40 worth of cards in return for your credit, but perhaps you can move that credit into something with far more upside?

The call to buy Modern Horizons cards a couple months ago was premature. I was on that bandwagon and I admit my error to this community. Now I’m left holding a smattering of Serra the Benevolents, Morophon, the Boundlesses, and a couple of the Horizon Canopy lands wishing I had their cash equivalents instead.

Those in the same boat as me will have to decide whether they want to hold these cards for longer than initially anticipated or to cash out now to avoid extensive opportunity costs. I’m leaning towards the latter because of my aversion to opportunity cost. Shipping some of this stuff to ABU Games can net me a reasonable pool of credit, though that credit is itself inflated.

Perhaps the best course of action would be to unload nonfoils and keep foils; foil inventory is far lower than nonfoil so the wait time for appreciation may be significantly less. If nonfoil cards can be traded in for credit, which could be used to acquire foils, this would maintain the same level of exposure to Modern Horizons while consolidating into the rarer assets.

Of course, nonfoils won’t get nearly as much store credit as foils—vendors are aware of the large discrepancy and have priced their buylists accordingly.

I’m on the fence with this one: what does the community think is the best move?