Tournaments are overrated. Or perhaps, better put, participating in large-scale tournaments can be a suboptimal experience. I don’t attend large Magic events all that often, but it has been years since I participated in a legitimate tournament. Drafts and Vintage side events aside, I can’t remember the last time I battled in a tournament setting.

By eschewing these large-scale events, a world of cards is opened to me as a player. Cards that would otherwise be considered illegal in a tournament setting. If I was the only one who preferred casual, non-sanctioned play, then the most desirable tournament-illegal cards would be cheap and plentiful. As it turns out, that’s far from the case.

In fact, there are many cards that are not tournament legal, but still carry a hefty price tag. This week I’m going to dive into the world of casual play, highlighting some of the most interesting targets. In some cases, these non-legal cards are essentially not reprintable, sparse in supply, and provide long-term upside.

The Collectors’ Edition sets are the first non-tournament legal Magic cards printed. Released in December 1993, 14,000 sets of this product (9,000 CE and 5,000 ICE) were printed as a chance to own Magic’s most iconic cards. Their square corners and golden back borders ensured their illegal nature in tournament settings. Remember, this was from a time when sleeves weren’t used in gameplay—these cards would stick out like a sore thumb. 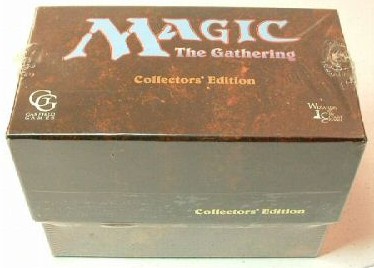 Fast forward 26 years and the landscape is completely different. Casual play is rampant, and almost everyone uses sleeves. As long as sleeves are opaque, no one cares if a player uses square cornered cards in their kitchen table games. Thus the demand for these non-legal cards has spiked while supply remains the same. After all, 14,000 copies of each card is not a lot to go around.

The result: some of these square-cornered cards have become extremely valuable. The International Edition Black Lotus has become the most valuable card not legal in tournaments. These now retail for around $2500 if in near mint condition!

The entire Power Nine, Dual Lands, Gauntlet of Might, Wheel of Fortune, Time Vault, and Chaos Orb all can sell in excess of $100. There’s a fairly steep drop-off in value from there, but any Old School playable card carries with it reasonable value ($10-$30) thanks to the rarity of these sets. If you’re going to proxy a high-dollar card for Cube or Old School play, nothing competes with the black-bordered, original artwork Collectors’ Edition cards.

From 1997 to 2004, Wizards of the Coast printed gold-bordered versions of the top World Championship decks. This was a low-cost way for everyday players to re-live battles that took place at the top level of Magic competition. While their print run is unknown, it’s safe to say that these didn’t exactly receive the demand as your everyday Standard set.

As far as proxies go, if you want to battle with a card that has similar cardstock to a real Magic card, plus the original artwork, these get the job done. Like CE cards, these won’t work in unsleeved Magic; but given the prevalence of sleeves nowadays, you’d never know the difference.

Some of these cards have become quite valuable as a result. It helps that various Reserved List cards appear in these sets. Here’s a list of the most valuable, along with Card Kingdom’s price tag.

Clearly the community has caught on—these gold-bordered, non-tournament legal cards have sufficient demand to see their prices soar. I don’t expect Wizards will be printing any more sets like this in the future. Given this likelihood, I see little reason for these to do anything but slowly climb in price—especially the Reserved List cards in the set! At $300, Gaea's Cradle is a very expensive card, and $65 is a significant discount for a casual-playable copy!

The newest tournament-illegal cards on my radar are the Mystery Booster Test Print cards. These are still being opened at MagicFests, so new supply is continually entering the market. This is reflecting in their gradual price-decay; even the more desirable cards are slowly dropping in price as the market absorbs new supply weekly.

Despite this, I believe their long-term prospects are interesting. Their supply will be fairly sparse, and after these are no longer opened from packs at large events, supply on the more desirable cards could dry up. I recently wrote a lengthy article detailing my interest in these cards, so I won’t dwell on them here. I’ll merely mention that these offer some long-term upside from casual demand; especially cards like Slivdrazi Monstrosity, which Card Kingdom is still out of stock of at $64.99!

Unglued was the first non-tournament legal set of new cards to be printed. While it was successful enough to merit the rounding out of the three-set block, I’d argue that the foil Unhinged and Unstable cards offer the most long-term upside.

For reference, the most valuable Unglued card on Card Kingdom’s site is Forest, retailing for $8.99. The most valuable Unhinged card is foil Richard Garfield, Ph.D., which retails for $299.99! Foil City of Ass and Mox Lotus also retail for north of $100. These outdo the most valuable Unstable cards by a fair margin—foil Island ($89.99) and Steamflogger Boss ($64.99). 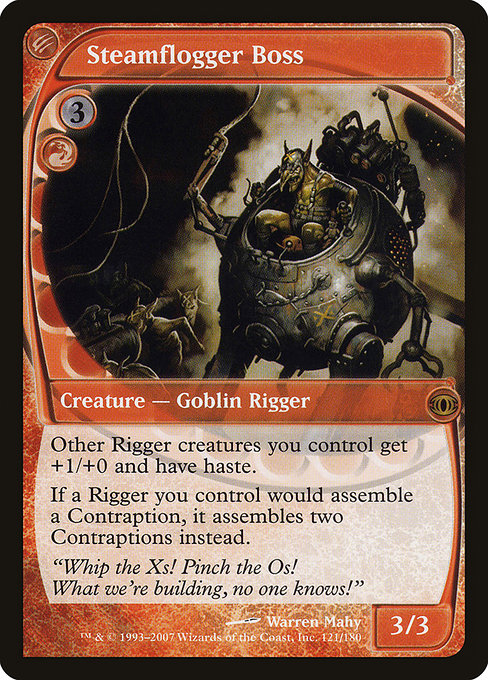 When dealing in Un-set cards, we need to be careful. There’s a major divide between the desirable cards and the undesirable ones—Un-set bulk cards are worth more as wallpaper than they are as Magic cards. But if you stick to the most desirable (and casual-playable) cards, you could see modest returns on these silver-bordered cards. If these are allowable in Commander as part of another promotional launch, you’d have a ripe opportunity to cash in on such a spec.

Pop Quiz: What’s the most valuable promo card not legal in tournament Magic?

Ok, maybe this was a bit of a trick question. Oversized cards are not tournament legal for obvious reasons—what’s more, they’re not even legal in casual Magic. It’s impossible to shuffle an oversized foil Avacyn, Angel of Hope in your deck, after all! Does anyone else remember when these Helvaults were opened, and some random stores opened foils in theirs? The hype was huge, and it looks like it never really died down given these price tags!

I’ll ask the pop quiz question again, this time with a clarifier: What’s the most valuable, casual-playable but tournament-illegal card? The answer is one of my favorites:

I’m not sure what exactly drives this card’s price tag. There are multiple holiday foil promotional cards, but this one is the most valuable (it’s also the only one I own). I can say that I acquired a copy years ago simply because I thought the artwork was cool—it is a nice play on Gifts Ungiven and ties in seamlessly with the holidays. But are copies of this card being shuffled up in casual and Commander games of Magic? I honestly don’t know.

All the other holiday promos are also noteworthy, but I want to skip down the list for an honorable mention: the Ponies: The Galloping set. These are the newest on the list of non-tournament legal cards, and they have characteristics that set them apart from others. They reference another Hasbro franchise—something done only once before (2017 Hascon promos). But with the 2017 Hascon set, only Grimlock really went anywhere price-wise. Nerf War seems underappreciated at $11.99 and Sword of Dungeons and Dragons’ price tag ($24.99) is dwarfed by Grimlock’s.

The Ponies, on the other hand, are more consistently priced for now. Card Kingdom is currently sold out of all three with identical $34.99 price tags. TCG low for Nightmare Moon // Princess Luna, Rarity, and Princess Twilight Sparkle are $32, $30, and $35, respectively. It’ll be interesting to see how their prices unfold going forward. But one thing is for certain, the box sets will gradually climb in price as long as the three singles can be sold individually for more than the set as a whole (currently at $79).

Casual, kitchen table Magic is where the majority of spell-slinging takes place. So it makes sense that cards specifically designed to be illegal in tournaments still carry hefty price tags.

This week I explored some of the more noteworthy tournament-illegal sets. Collectors’ Edition is the first, and also perhaps the rarest. But there’s still plenty of demand for more recent sets, even including cards that came out as recently as 2019. Just wait a couple years—I bet Ponies: The Galloping sells for more than it sells for today.

Wizards of the Coast has clearly caught on, that there is such demand for tournament-illegal cards. This is evidenced by the inclusion of Test Print cards in the Mystery Booster packs. The question now isn’t whether or not Wizards will print more non-tournament legal cards. Instead, I only wonder what they will have in store for us casual players in 2020!