After taking my hiatus from playing competitive Magic: the Gathering (or really any Magic at all), I found myself getting really hyped for Ikoria! I was stuck running mono-red over and over again in Arena and didn’t want to spend any of my wild cards on something until the new set came out. There were going to be so many new awesome rares and mythics to choose from! Imagine my surprise when the dust settled and I found my new favorite deck, and instead of being packed full of new Ikoria rares or mythics, it features eleven copies of brand new Ikoria commons! (It is, also, running Lurrus of the Dream Den as it’s companion, but I think the deck would still be good without my new nightmare kitty friend.)

This got me thinking about commons. One of my favorite formats before my hiatus was Pauper, and while I was working at ABU one of my favorite time-killing hobbies during slow hours was reading up on Pauper lists, looking at all the new commons coming out in future sets, and seeing if I could speculate on which ones would be good so I could snap them up before all of my town’s rabid pauper players ran us out of stock.

Originally, I wasn’t doing this to make a profit, just to make sure I could play the decks I wanted, but there were times I ended up making decent amounts of money off of my decisions. For instance, I snapped up something like 60 copies of Arcum's Astrolabe for under twenty cents each, and then traded them back in for credit over time for a dollar or more apiece (until the banning that is. If I’d sold them all at once I would have done way better for myself.) 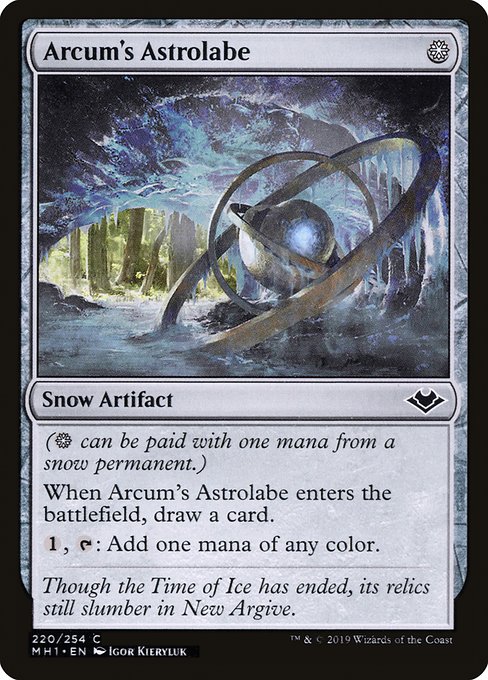 Those fond Pauper memories, my new Standard deck, and Brady’s excellent article earlier this month, "Picking Pioneer: Bulk Picks from War of the Spark", got me thinking about all the new commons we got with Ikoria. While you might not get rich speculating on commons, I still think it’s good to keep an eye on the common all-stars of any format just in case (especially if you need them for decks.) With that in mind, let’s take a look at four of my favorite commons from the new set! 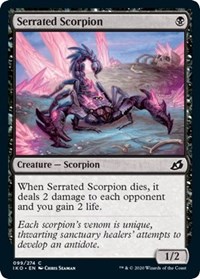 I’ll be the first to admit that competitive card evaluation isn’t my strong suit. I was valuing this card pretty high in my initial limited picks while jamming sealed and drafts in the first few days Ikoria was legal in Magic Arena, but I didn’t think much of our little scorpion friend as far as constructed goes. Until I saw it in a decklist from Stephen Croke featuring both Serrated Scorpion and the next card in our list as four-ofs.

Serrated Scorpion is super cool in a sacrifice deck with ways to recur it back to the battlefield, and I’m sure it will stick around in that vein in Standard for a while. If it finds it’s placed in any other format’s sacrifice based strategies, keeping a little stash of these aside in your spec box isn’t a bad idea!

At the time of writing, these feisty little fellas are pre-selling on TCGplayer for about $0.25 for normal printing and $1.00 for foils. After the paper release happens and tons of packs start getting open, I’d imagine we see a dip in the price for a while. I’ll be on the hunt for some foils, and definitely setting these aside from any packs I open. 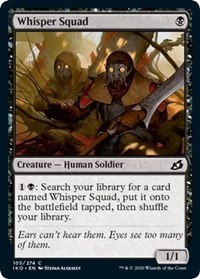 Next up is another four-of from my new favorite Standard deck. Whisper Squad is basically a bad Squadron Hawk, and at first I didn’t think they’d find any use outside of Limited. I’m super glad I was wrong. The deck-thinning and recursion potential from this common have proved to be super great for me so far in my Standard games on Arena. I scoured current successful Pauper lists for a home this could slot into but I haven’t found one yet. I could definitely see someone creating a new Pauper home for it though, which is an exciting thought!

This is another one I’ll be hunting for foils of when the set releases in paper. It's preordering for about the same amount as Serrated Scorpion right now on TCGplayer as well. Plus, the art is rad! 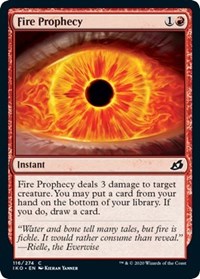 As a red player at heart, I was pretty stoked when I saw Fire Prophecy for the first time in my Arena sealed pool. I doubt we’ll ever be able to go back to the glory days of playing one red mana for a Lightning Bolt, but in Limited and Standard at least, paying two mana to burn a creature and filter a card seems pretty great.

This sweet Gruul Midrange deck lucajak#66164 used for 5 wins in an Online MagicFest Qualifier features two copies in the main.

3 Cindervines
3 Flame Sweep
2 Fry
3 Grafdigger's Cage
1 Kaheera, the Orphanguard
1 Scorching Dragonfire
2 Storm's Wrath
While I’d be a lot more excited to see people running four copies, I’m fairly certain we’ll see more of this card in the future days of Ikoria Standard. Being able to kill small creatures and filter/draw is a super useful effect! I’m not entirely sure when it comes to Pauper though. It’s hard to beat all the one-mana burn spells Pauper has access to, but I’m sure there will be decks that appreciate the filter/draw effect. Normal printings of this card are preordering for about $0.25 right now with foils seeing close to $3.00. I think this is definitely a card worth putting aside and seeing what it’s price does. 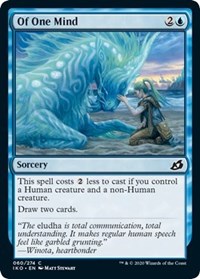 If there’s one thing Pauper probably didn’t need, it was another fantastic blue card. Even with the all-star hitters Gush and Daze being banned, blue-based decks are still hanging out at the top of the Pauper meta. Seeing that many of them play Delver of Secrets // Insectile Aberration and/or Ninja of the Deep Hours in conjunction with Spellstutter Sprite it’s likely that whoever decides to run Of One Mind in their blue decks is going to be able to fulfill the conditions required to draw two cards for just one blue mana.

Finespoo played a few copies in their recent 6-1 deck in a pauper challenge.

This card is great, and slots into some of the best decks of the Pauper format. Even though it’s not seeing much play in Arena Standard right now, I think this one is definitely worth keeping an eye on. It looks like it’s preordering for about $0.15-0.25 on TCGplayer right now for normal printings and a little over $1.50 for foils. I know I’ll be hunting for foils at that price or below and will be setting aside any copies of the non-foils I come across. Plus, I’ll be playing them in my Pauper Delver deck for sure.

Like I said, I know you’re not going to get rich speculating on commons. However, it’s a low-risk way to flex your MTG Finance skills and pick up playsets of cards for a super fun format (I think everyone should try playing Pauper, it’s great.) Using our Trader Tools to keep an eye on price fluctuations is a great way to track all of your sweet Pauper specs! I’m excited to play all of the commons I talked about here, and if you stop by my Twitch channel you’re bound to see me playing my Serrated Scorpions and Whisper Squads for as long as they’re in Standard! I hope you all are doing well and staying safe out there. Feel free to hit me up on social media or say hi on Twitch, and I’ll see you here next week!