When it comes to monitoring certain card prices, I can be a little obsessed. My morning routine always includes a quick glance at the Interests page on MTG Stocks as well as Card Kingdom’s hotlist. I’ll also frequent other buylists to glean retailer sentiment regarding the hottest cards.

With COVID-19 effectively shutting down paper Magic events, many retailers are struggling to restock popular cards. They’ve responded to the shrink in market supply in different ways.

A couple weeks ago, Star City Games tweeted something that caught my eye: 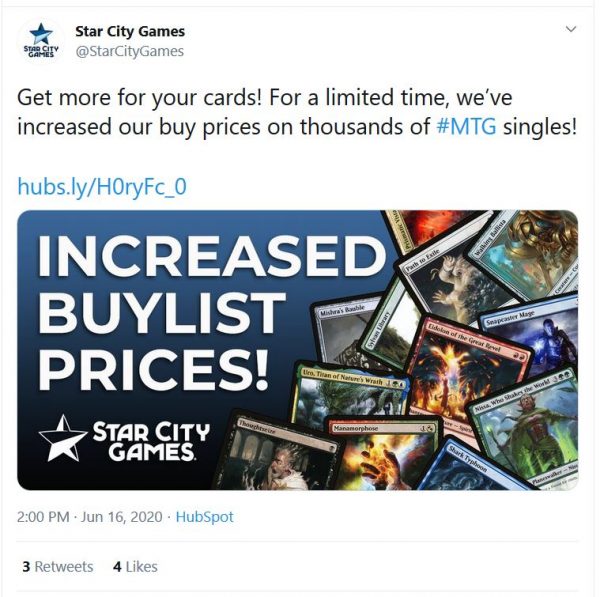 I’ll admit Star City Games’ buylist wasn’t on my radar as one to check frequently. Their buylist was once best in class when it came to value and hot cards, many years ago; I sold to them regularly circa 2014. But the past few years have seen retailers like Card Kingdom and ABUGames really storm to the forefront in offering the best value for cards.

Then you’ve got ChannelFireball boasting their “buylist bonanza” on Twitter, even showcasing it as their Twitter banner.

One question remains: who is best in class? This week I’ll look at a few key cards across multiple formats in order to evaluate just this question!

I mostly deal in older cards, so it’s probably no surprise that my inclination is to start here. But there’s a greater reason for this: many cards in this category are accelerating upward. Don’t take my word for it, though. Check out these numbers (near mint prices cited):

There are dozens of cards worth tracking here, but I tried to pick a fair representation of popular Legacy and Vintage cards. I’ve bolded the highest dollar amount, by card, for both cash and store credit numbers. As of Sunday, June 28th, it looks like Card Kingdom is still your best bet for buylisting older cards. It’s nice to see Star City Games and ChannelFireball in the ballpark, though…that wasn’t always the case.

ABUGames still offers more store credit for cards than any other vendor, but keep in mind the caveat that their sell prices are equally inflated. If I had one of each of these cards to sell and a choice of vendors to sell to, I’d pick Card Kingdom for either cash or less-inflated store credit.

Also, it’s critical to keep in mind how these stores downgrade their offers due to condition. For example, Card Kingdom would pay 80% of their near mint buy price for a moderately played (i.e. “VG”) Underground Sea, equaling $272 in cash. Star City Games lists their buy prices for lower conditions individually, and they currently offer $250 for a played copy. ABUGames also lists unique numbers by condition and offers $224.07 for played Underground Seas.

ChannelFireball downgrades older cards most severely, offering just 25% of their posted buy price; suddenly their best-in-class $350 number becomes a worst-in-class $87.50. Who in 2020 is going to sell a Revised Underground Sea for $87.50?

Whether cards are near mint or played, I’m sticking with Card Kingdom with this category.

If I had to guess, I’d say that Commander is the most popular paper Magic format in a world where large tournaments aren’t taking place. Therefore, it’s no surprise to see some of the hottest Commander staples rising in price. Players still want to build new decks and battle their friends, but vendors are having a tough time restocking these cards—older ones are especially difficult due to the smaller supply.

But which vendor of the big four is best to sell to? Let’s look at some numbers!

Store credit numbers follow a similar trend to the Legacy/Vintage list earlier—ABUGames offers best-in-class store credit for cards, but their inflated prices need to be taken into account.

But again, keep in mind ChannelFireball’s most severe condition pay scale. Anything older than Eighth Edition is going to see aggressive payment cuts unless it’s near mint.

Meanwhile, Card Kingdom uses dollar value to determine how much to cut based on condition (with Alpha, Beta, and Unlimited being an exception). 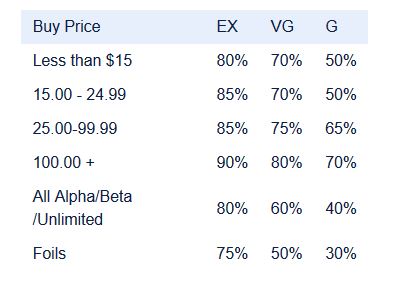 Comparing these two lists, however, we see that Card Kingdom is minimally the same if not more generous than ChannelFireball when it comes to played cards.

Net, for this category, if you’ve got near mint cards and are after cash or store credit you’ll want to compare Card Kingdom, ABUGames, and ChannelFireball’s offers. If your cards are played, however, your best bet is ABUGames and Card Kingdom.

I haven’t dealt in Modern or Pioneer cards in quite some time. There was a moment of hype when Pioneer first began because it was viewed as a less-powerful, wide-open format as compared to Modern. Since then, however, I think things have calmed down. This is partly because these two formats rely heavily on paper events to drive demand, and there just aren’t many of those going on right now.

Still, some of the multi-format staples that see significant play in Modern and Pioneer are worth real money. Let’s compare some top played cards in the two formats to see which vendor pays best:

Again, ABUGames’ inflated store credit comes into play. But if cash is your end game, there really is no clear winner here. Each vendor has at least one card where they offer the highest dollar amount. For the most part, all cash offers are within 10-15% of each other (besides Dig Through Time) so you won’t be selling yourself short if you pick one vendor and stick to them. In this case, there really is no clear winner.

The key takeaway here is that if you have Modern and Pioneer cards to sell, check each vendor individually and consider condition of your cards before choosing a retailer. Rest assured you won’t be missing out on too much money by selling all your cards to a single vendor. It may not be worth the extra effort and cost in shipping multiple buylist offers.

Thanks to Magic Arena, I know more about Standard now than I have known in nearly a decade! I know all about the predominance of Growth Spiral-driven decks, and I have developed a casual fondness of the Rakdos Sacrifice deck—it must be something about winning with a 1/1 cat that I find entertaining.

Alas, I have written at great lengths previously about how Standard card prices may be suppressed due to the lack of paper events taking place. This is especially the case when looking at Ikoria prices, which all seem deflated—perhaps this is due to their reduced impact on the Standard metagame? Still, those Triomes should be worth more given their ubiquity in Standard (and probably Commander)!

In any event, here’s a breakdown of vendor buy prices on the hottest Standard staples:

The dichotomy between Uro, Titan of Nature's Wrath and the rest of cards in Standard is baffling. That one card is worth about four times as much as some of the other most-played cards in Standard.

In any event, it’s no surprise to see Card Kingdom is competitive with their buy prices yet again. What is surprising is how well Star City Games performed in this category, offering the best buy price on three of the cards! ChannelFireball only had the top buy price on one card. I would not advise shipping Standard cards to ABUGames based on their values, unless you’re really eager for some of their store credit.

Net, if you’re selling Standard cards I recommend checking Card Kingdom and Star City Games for the best deals. ChannelFireball may be competitive as well; I guess if you want a chance to win a Black Lotus as part of ChannelFireball’s buylist bonanza, you could justify sending some Standard staples their way.

Obviously this analysis is incomplete; it’s only a snapshot across formats. To do a more robust assessment of buylists, you’d have to expand the list of cards significantly. A complete analysis was not my intent with this week’s article.

Instead, I’m trying to get a feel for whether or not it’s worth shopping cards around across the four major online retailers. Up until recently, I only focused on ABUGames and Card Kingdom when I wanted to sell/trade cards. But recent tweets from ChannelFireball and Star City Games grabbed my attention, so I thought I’d give them another look. You also could consider MTG Seattle, which offers very competitive numbers if your cards are minty fresh. I have minimal experience in dealing with them, however.

Card Kingdom is still best in class overall—especially when dealing in Reserved List Legacy and Vintage staples (especially if they aren't mint). If you have newer cards from Commander, Modern, Pioneer, and Standard, then you’re best off shopping these around at Star City Games and ChannelFireball as well. They each have pockets of cards where they offer the best value, and their condition downgrades are less severe.

Be careful when shipping played cards to ChannelFireball. Their downgrades on older cards are especially harsh. Also, don’t forget that ABUGames’ store credit is inflated, so their “best-in-class” numbers are misleading. Unless you find something fairly priced on their website, your best bet is to discount all ABUGames credit numbers by 20-30% in order to make for apples to apples comparisons with the other retailers.

This is an interesting time to buy and sell cards as vendor inventory dries up. Restocking at major events just can’t happen as long as COVID-19 is around. Since this virus is here to stay for at least a few more months, I expect pricing trends to continue in the same direction. This could make for some attractive exit points if you’re looking to raise cash. Keep a close eye on trends, and make sure you shop around because multiple vendors are upping their game in their pursuit of your cards!

2 thoughts on “Buylist Competition Is Heating Up”