Certain older Magic cards remind me of cyclical stocks. Their price curve follows a periodic trend, and follow a pattern of expansion, peak, recession, and recovery. Cyclical stocks are tied to the health of the economy; I wonder if cyclical cards also have some connection.

In any event, I’m noticing that the so-called “cyclical cards” are on the move again, climbing relentlessly higher and making new highs. I wonder, though, if these cards merit a much higher price point or if this trend is occurring artificially.  Is demand truly on the rise, or is the lack of large paper Magic events constraining supply? Or is it a combination of both?

Either way, I’m looking at some buylists and card prices and thinking it may be a good time to raise some cash. Of course, the general trend for a playable Reserved List card continues to be upward and to the right. But if you need to raise cash or are facing some unwanted opportunity cost, you may do well to sell a cyclical card or two while it is peaking.

This week I’ll share five cards or groups of cards that you may consider selling into strength in anticipation of a pullback when the cycle turns over.

Cards That Could Be Sold Into Strength

Mana Drain’s value was nerfed quite a bit when it was reprinted in Iconic Masters. Since then, however, its price has recovered and then some! Looking at Legends copies specifically, it looks like the price has skyrocketed from $180 to $400 in the month of June. Granted, that’s TCGplayer pricing, which is easily influenced by price manipulation. Looking to Card Kingdom as a more reliable pricing source, the card is completely sold out. They have near mint Legends copies listed at $279.99 with a $170 buy price—expect both of these numbers to climb in the short term.

But how sustainable is the upward trend? Well, the card is not banned in Commander, so it could be seeing newfound demand from cEDH. But you need to remember one critical point: Mana Drain is not on the Reserved List. It can and has been reprinted, and it will likely be reprinted again. When that happens, the price will pull back all over again. If you need your copies, it’s fine to hold onto them—but if you can spare a couple extra, I’d look to sell into this strength. 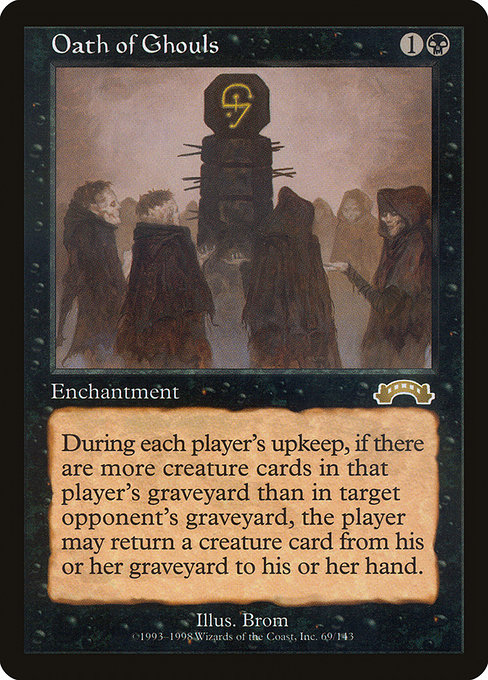 Next on my list is a group of cards that can be bucketed together, rather than an individual card. I’m reviewing the MTG Stocks Interests page and identifying the top movers of the week. Towards the top of the list are a few speculative Reserved List cards, likely getting attention due to spoilers from either Magic 2021 or Jump Start.

The list most recently includes Oath of Ghouls, Didgeridoo, Anvil of Bogardan, and Lure of Prey. Also on the list is Nameless Race, which is spiking because speculators think it may be one of the next cards to be banned due to racist undertones.

I’m a seller of all these cards. Many have spiked multiple times in the past, only to drop back down again in the subsequent months. 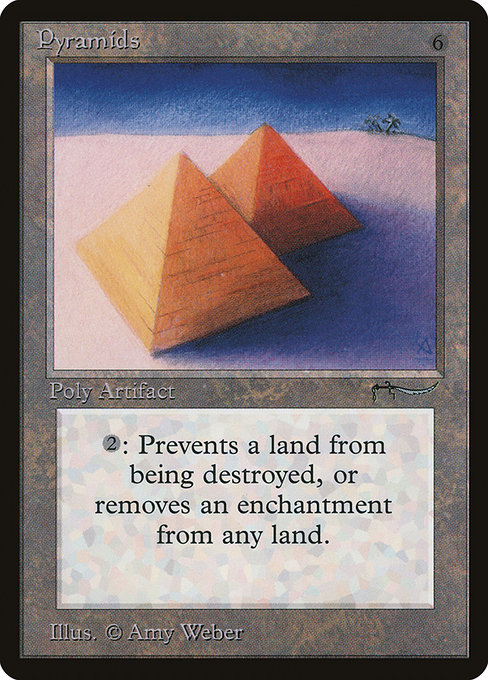 I don’t care that there’s a single person out there buying up all the copies of Pyramids. This card should be sold into these buyouts unless you absolutely need to own a copy for your collection (there’s no way you’re playing this card in a deck, right?).

But trust me: bad card is bad. Sell this card, buy something you will actually play, and don’t look back. 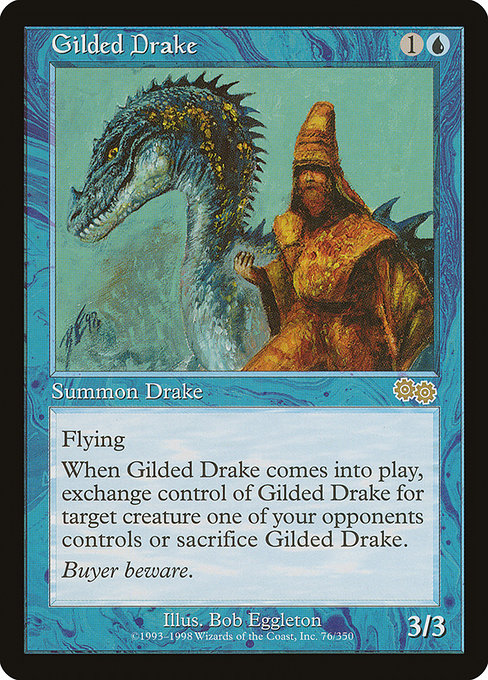 This pick may be slightly more controversial, but I believe this Reserved List Urza’s Saga card has run up too far too fast. Take a look at that price chart: the card has gone from under $70 to over $200 in 2020. I understand cEDH is a thing, and this card can be very powerful in certain decks. It’s on the Reserved List, so new copies will never be printed. But I have to imagine, in comparing this to other Reserved List cards, this one has gotten overheated.

Five or ten years from now, Gilded Drake may be even more expensive. But if I had to bet money, I’d predict that this card’s value will be lower six months from now. By the time Urza’s Saga rolled around, print runs were not so small as to create genuine scarcity (as opposed to an Arabian Nights or Legends card, for example). Sell this card, take profits and put them to work elsewhere. This one needs to cool down a bit.

It seems like just a few months ago, Dual Lands were being sold hand over fist on social media. Heavily played copies were especially cheap: Plateaus for $70, Savannahs and Scrublands for $90 and even some Unlimited Underground Seas were posted in the $400 range.

These have all taken off lately. It’s reflected on MTG Stocks and it’s reflected on Card Kingdom’s buylist. All ten Revised Dual Lands are currently listed on their hotlist, some with their highest buy prices in a long time. Being so prevalent in Legacy and Commander, these are sure to continue climbing in price, right?

Yes and no. Like most playable Reserved List cards, we can be generally confident they’ll be more expensive years from now. But there may be a short-term trend where these cool off before they can start the next bull cycle. Dual Lands tend to rise and fall on a 2-year schedule: they jumped in May 2015 and then drifted slightly downward for 18 months. Then they jumped in early 2016 and flattened out for another 18 months. Then they went on a massive run late 2017 into mid-2018. Since then, they’ve been moving downward for…you guessed it: 18 months.

Another jump is due if we assume this 18-month cycle repeats itself. We may be seeing the beginning of this trend. But I don’t think these will spike to all-time highs like they did in 2018. If they do, it’s definitely a great opportunity to sell. When it comes to Dual Lands, the higher they spike, the more they have to drop once the buyout cools down. I don’t think these should be sold just yet—wait another few weeks. But monitor prices closely. If Card Kingdom starts to restock these and drop their buylist, it could be a sign that the cycle has run its course.

Once these hit their peak, we will likely enter an 18-month period where their price gradually drops. It’ll be much easier to sell these while they’re spiking than while they are pulling back.

COVID-19 or not, it looks like we’re entering another cyclical period of card price growth. It appears to occur every 18-24 months, and following the massive Reserved List buyouts of 2018, I’d say we are just about due for another period of rising prices.

Judging by MTG Stocks and recent price data, it appears we are entering that phase. While it can be a time to recognize collection value growth, it’s also a smart time to pick some cards to sell into this strength. If history repeats itself (it likely will), we’ll see a short period of jumping prices followed by 18 months of price corrections back downward. If you want to raise cash, it’s a good time to do some selling.

This week I presented a handful of cards that look like attractive sells. Keep in mind, the general trend of playable Reserved List cards will continue to move upward when you look at a multi-year scale. If I had to bet, I’d say Dual Lands and Gilded Drake will be more expensive five years from now than they are today. But if I consider a month-to-month trajectory, I’m not so confident in an upward trajectory. Keep these short- and long-term trends in mind and make the best decision to meet your own personal collection and financial needs.

For me, personally, I won’t be selling much. In fact, over the past couple months I’ve been buying cards as they heat up, attempting to get in front of these buyout trends. I may sell strategically if prices get out of hand—so far, the climbs have been largely reasonable (barring a couple of the cards I mentioned above). Should things go exponential, I’ll definitely scrutinize my collection more closely. If that happens, rest assured I will be writing more about it!