In the wake of the companion nerf, in which Wizards announced the creatures would cost an additional 3 mana to tutor from the sideboard, David penned a piece discussing the pros and cons of keeping companions as companions given their hefty new price tag. Today, I'll expand upon that idea, looking more closely at where I expect Lurrus, Yorion, and the other companions to end up in Modern. 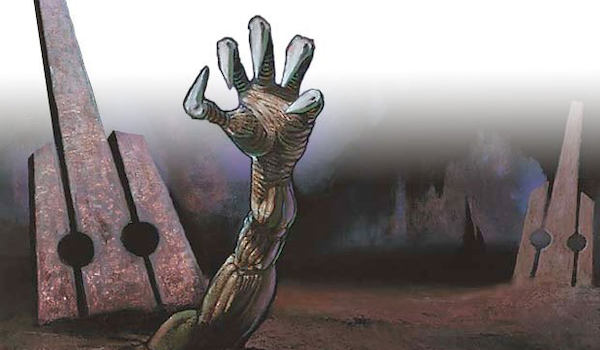 No companion has rocked competitive Magic like Lurrus of the Dream-Den. The card's metagame shares are bound to plummet with the companion nerf, but I nonetheless envision Lurrus retaining relevance in a few archetypes, including some that were already running it. 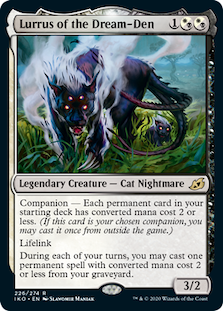 Lurrus's inclusion in Burn represents perhaps the most straightforward path for any companion post-nerf. Just as Burn was able to free-roll the companion with no mainboard changes, I imagine Lurrus will continue to occupy a permanent slot in the Burn sideboard as a last-ditch plan in the face of stabilizing opponents. The costs of running Lurrus are quite minimal, only asking a sideboard slot. And while six total mana is heaps for Burn decks, I think having guaranteed access to Lurrus for two-to-three games every match will prove eminently more useful than that fifteenth sideboard option. 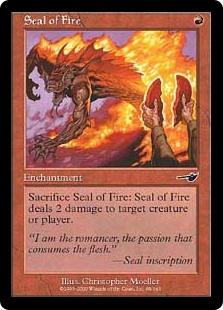 We saw some Burn decks adjust their mainboard composition to further enable Lurrus, slotting in Mishra's Bauble or Seal of Fire. I expect this trend to end, with the exception of Grim Lavamancer, already a mainboard staple for some metagames, to slightly tick up in relevance. Not only is Lavamancer a playable Burn creature in its own rite, its status as a recurring source non-combat damage makes it a uniquely attractive Burn creature to recur with Lurrus. After all, Lurrus should only resolve in games going long enough that opponents have the red zone covered.

While Lurrus has found its way into plenty of Modern decks, Jund has been one of its more high-profile adopters, eschewing long-time staples Liliana of the Veil and Bloodbraid Elf for cheaper haymakers such as Kroxa, Titan of Death's Hunger and a full set of Mishra's Bauble. The days of Jund playing Lurrus in the sideboard are probably over. But I expect the card to make a splash in the main for many a build of BGx. 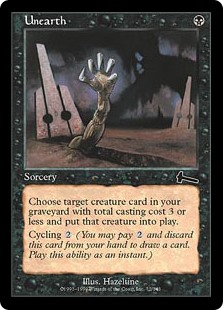 Once opponents dealt with the first Lurrus, BGx would turn to Unearth to give the Nightmare Cat another of its nine lives and keep the value train rolling. This Unearth-Lurrus package is appealing in BGx for the same reason that Snapcaster Mage has always tempted Golgari mages with a blue splash, except that bringing back permanents tends to be more high-impact than recovering instants and sorceries. Without the companion restriction, mainboard Lurrus boasts an even higher ceiling, letting players recast the likes of Bloodbraid and Liliana.

I expect that at first, some black midrange decks will employ Lurrus as a primary gameplan, running 4 Bauble, mainboard copies of Lurrus, and perhaps even a companion copy. At least early on, there should be a split of companion-featuring and non-companion builds of different black midrange strategies. Ones that already play Bauble, such as Traverse Shadow, may look into adopting Lurrus for the long haul. Otherwise, Mishra's Bauble will probably be retired by black midrange. Rather, Lurrus is likelier to end up a one- or two-of where we've seen Liliana of the Veil and other utility options.

Prowess decks without high-costed permanents will definitely want to run Lurrus in the sideboard, just as the Burn decks will. But there's less of a reason to go that route post-nerf, and Bedlam Reveler should make a compelling comeback in the coming weeks. In any case, while Mono-Red Prowess should remain a top-tier deck, I do believe the strategy's Lurrus-fueled domination is over.

But I do anticipate Lurrus's widespread adoption among lower-tier decks, again as a mainboard plan. The deck best-positioned to take advantage of a permanent-based Snapcaster on legs is Rakdos Unearth, a strategy already in the business of reanimating busy three-drops as it churns through cards with Seasoned Pyromancer. This and other Lurrus-heavy decks probably will want to run a set of Baubles. Heck, BR Unearth was an early adopter of the card even pre-companion.

Lurrus could also serve a noble companion function in many lower-tier decks, such as Devoted Combo or tribal Aether Vial strategies like Zombies or Merfolk. Many of these critical-mass creature decks, be they aggro- or combo-aligned, already happen to fulfill the companion requirement. And while Devoted Druid-fueled ramping can handily pay the companion tax, Aether Vial instead casts Lurrus for free, with each case helping mitigate the nerf. 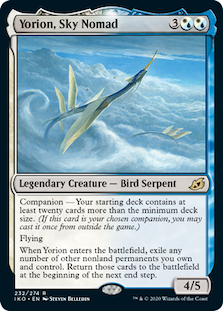 80-card piles featuring the same Temur-informed core of snow permanents and cantrips have been the primary employers of Yorion, and I don't think these decks are going anywhere. As David predicted, while Yorion is no longer a turn-five value drop that buries opponents in cards, it's still a feasible late-game plan for a deck that would rather not commit any of its mainboard slots to closers of such magnitude. 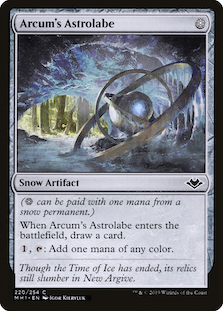 These decks may change very little, but Yorion is nonetheless a less attractive plan than it used to be. As it costs more mana, it's not as flexible as it once was, which should draw some players back to Snow Control. Pre-companion, UGx Snow flavors occupied a dominant place in the midrange hierarchy. But after, there was little reason not to convert these disparate Astrolabe decks into the same 80-card deck, its bulk filled out not by unique packages, but a cookie-cutter set of cantripping permanents congruous with the Yorion payoff. In other words, blue midrange is about to be a party once again.

With Yorion Uroza being neutered, I expect some less-competitive Yorion decks to gain traction in the metagame. While they won't climb to Tier 1, I'd be surprised if previously fringe choices such as UW Blink and green-based value creature decks didn't take up some of the shares left vacant by the de-powered Yorion decks of old. 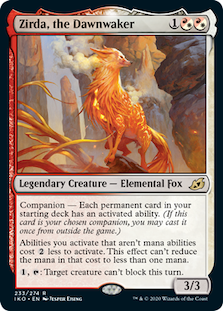 Lurrus and Yorion may have occupied much of the discourse surrounding companions in Modern, but other such creatures were in fact printed! I expect these to suffer varying fates.

Zirda, the Dawnwaker decks may just keep on truckin'. Take Zirda Abundance, a combo deck so reliant on the Elemental Fox as to run three copies in the mainboard. This deck was never interested in running any nonland permanents lacking activation costs, so I doubt the companion leaves its sideboard. That is, if the deck survives at all.

Another such Zirda Company deck is built around the Heliod, Sun-Crowned and Spike Feeder interaction. Here, Zirda is far from essential to the combo, but nonetheless nice enough to have that it can be run in the main. 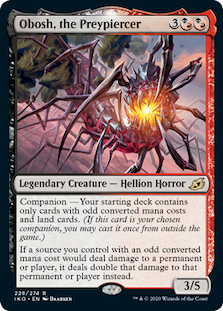 Obosh, the Preypiercer found its way into the Gruul and Naya beatdown decks that informed April's aggro-control metagame. Those decks did have to make some concessions to the Hellion Horror, usually trimming either Bloodbraid Elf or Stoneforge Mystic. Will this compromise continue to be worth it now that Obosh costs extra mana to deploy?

My guess: sometimes. The new breed of beatdown decks that had been built around Obosh certainly had little use for even-costed spells. But there may well be some that players would rather have than the companion. Still, it bears remembering, and considering that Arbor Elf plus Utopia Sprawl is more than capable of producing the payment Obosh requires.

Nerfed, But Not Foresaken

Modern has certainly not seen the last of the companions, which will remain competitive fixtures in the format... probably forever. So don't sell that out just yet! Instead, tell us: how are you planning on wielding companions post-nerf?