COVID-19 has surely made its impact on all people across the globe—there’s no way to refute this fact. On a personal level, I can think of a few changes I’ve made to adapt to this new universe.

First and foremost, I’ve been fortunate enough to be able to work from home since the pandemic started. My family doesn’t eat at restaurants at all, and we have significantly reduced the amount of take out we order (mostly food for delivery or drive-thru). My sleep schedule has shifted about 30 minutes later since I don’t have a commute anymore.

And, of course, my engagement with Magic has evolved. For one, I play more games of Magic than I ever have before thanks to my adoption of the Arena platform. This has resulted in my intimate understanding of the Standard and Limited metagames, something I hadn’t paid close attention to since original Innistrad (right before my son was born) (Consecrated Sphinx in Standard was fun). 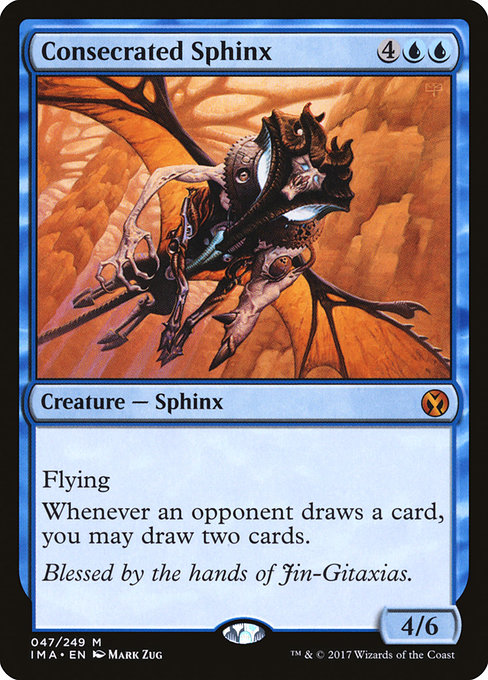 Magic finance has also been impacted, and it’s really interesting to study how price trends unfolded over the last 8 months. Some very in-demand cards have weak pricing, while other virtually unplayable cards have shot up in price. It’s this shift, in particular, that will be the focus on my article for this week.

Online pricing data doesn’t quite go back far enough, but I seem to recall ten years ago the powerhouse mythics of Standard started at $20 and went up from there. Once upon a time, Bonfire of the Damned, Baneslayer Angel, and Primeval Titan were each north of $30 with the first two more in the $50 range.

Despite being the newest cards in Magic, the ubiquitous nature of Standard play made these cards valuable and worth trading in and out to grind value. In the COVID-19 world, Standard looks drastically different. Thanks to the success of Arena, Standard is as strong as ever and people are playing tons of games in the format (especially thanks to the recent bannings). Yet all this digital play does little for paper prices.

For starters, take a look at this snapshot from MTG Stocks of the top 20 most played cards in Standard: 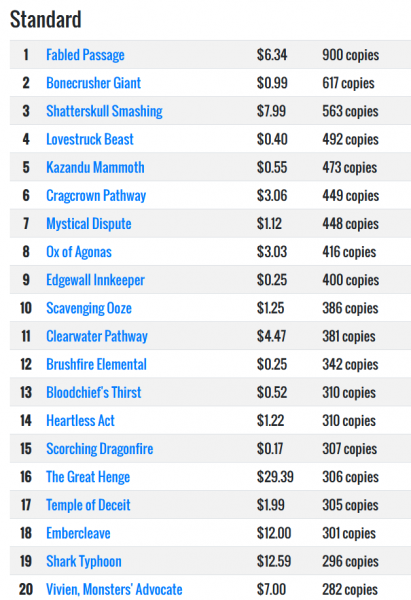 “Wait a second, Sig. The Great Henge is a $30 Standard card. Doesn’t that count?” 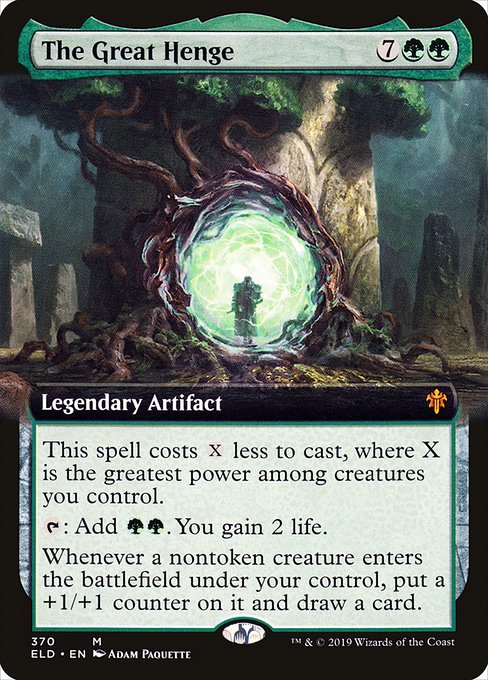 Yes and no. It’s true the 16th most played Standard card is a mythic rare worth $30, reminiscent of Standard playable mythics in the past. But I strongly suspect the card’s price has less to do with its Standard play and more to do with its utility in Commander. EDHREC’s data is skewed, but directionally speaking the 15000+ lists that include The Great Henge far outshines Embercleave’s 5000 lists.

I don’t think the $18 difference in price is the result of being the 16th most vs. 18th most played card in Standard. It’s because The Great Henge is included in triple the lists on EDHREC.

To further this argument, take a look at the number one most played mythic rare in Standard: Shatterskull Smashing // Shatterskull, the Hammer Pass. 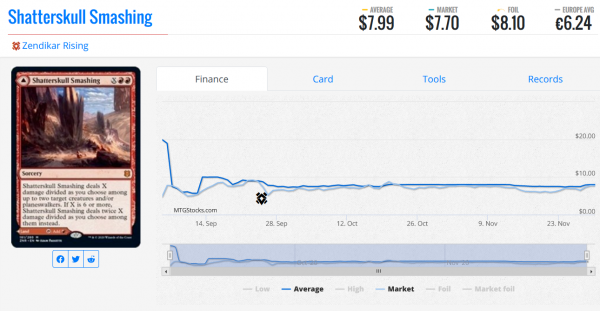 This card is all over the place—being both a land that can enter the battlefield untapped on early turns as well as a spell that kills two creatures on late turns makes this quite versatile. There is little downside to including at least a couple copies of this card in any list playing red as a hedge against mana flood in the late-game.

Despite all this, and despite being in the newest set, the card is a pitiful $8. I would have never imagined a world where you can open a pack of the newest set, open the most-played mythic rare in Standard, and just barely recoup your booster pack cost after fees and shipping. Yet here we are.

Moving into the rares, the same trend largely holds true. Bonecrusher Giant // Stomp is everywhere. It’s the second most played card in Standard, yet it can’t even be traded for a $1 cheeseburger from McDonald’s. The most played rare, mana-fixing land is similarly anemic: Cragcrown Pathway // Timbercrown Pathway is just $3!

Shark Typhoon is the only rare that bucks this trend of depressed prices. This is the only one that seems to have a robust price in this world of no large paper Magic tournaments. I don’t think this card is as played in Commander. Perhaps it’s seeing play in older formats as well? In any event, this is one of very few Standard cards to get excited opening from a physical booster pack of a Standard set. 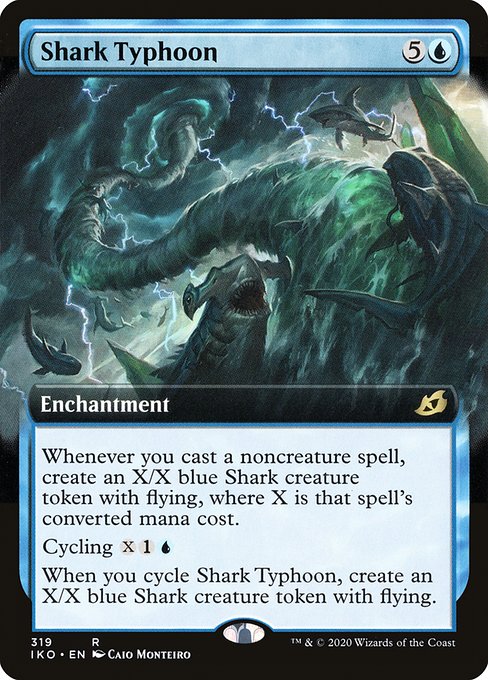 It’s difficult to find an exact parallel to compare Standard’s anemic prices with Old School / Reserved List’s strength. A quick look at the most played cards in Vintage, according to MTG Stocks, is useful in this comparison. 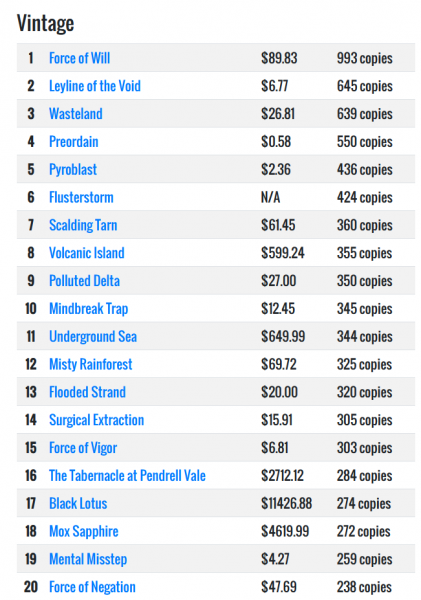 Reprints make for poor data in this analysis, so I’m dropping my attention to the 8th and 11th most played cards in Vintage first: Volcanic Island and Underground Sea. Those prices are near record highs! 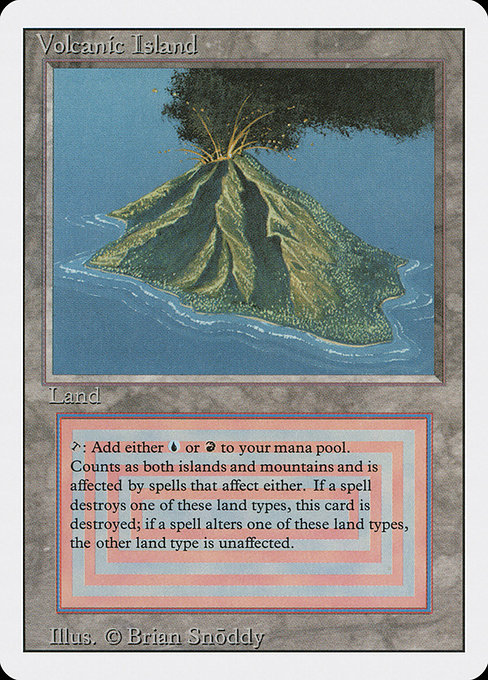 A little further down, and things really get silly. Granted these prices reflect a thinning inventory on TCGplayer, but The Tabernacle at Pendrell Vale, alongside Power 9, are all way up versus 8 months ago when things started to shut down in the U.S.

For example, check out the price chart on Tabernacle.

The top buy price now is about $2145, a level this card hasn’t seen since November of 2018—roughly two years ago! This isn’t happening because there are more paper Vintage events happening. It’s because there are no large-scale paper events!

Think about it: these cards have much thinner inventory relative to anything in the Modern era of Magic. So as vendors continue to sell cards online (especially cards from the red hot Commander format), they have a harder time restocking inventory. I suspect the relative number of players who mail cards to buylists is smaller than the number of players who sell these cards to vendors at their local events for immediate cash in hand.

As this trend continued throughout 2020, the squeeze on market inventory took its toll. Prices climbed and remain at elevated levels.

It’s not even the most desirable Reserved List cards that are at record highs. Anything collectible and somewhat unique from the earliest sets of Magic now command a low-inventory premium. Take a look at something like Acid Rain for example. 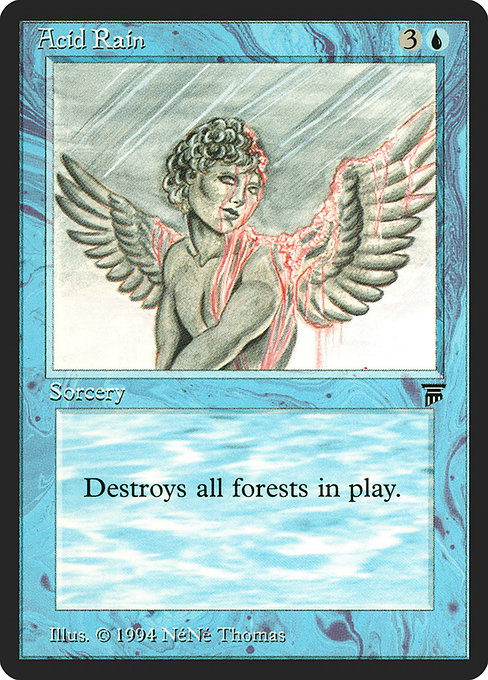 You can’t possibly tell me this card is suddenly seeing more play. But it does something different and is a Reserved List rare from Legends. That’s all it takes nowadays!

The same can be said for Golgothian Sylex, Livonya Silone, and Hellfire. Given the age of these cards and their limited print run, it’s especially difficult for vendors to restock these cards. One could argue they should not be chasing prices higher in order to restock as it’s perpetuating the price inflation; I suspect vendors aren’t concerned with this as much as they are with having inventory. As long as they sell out, they will keep increasing buy prices.

What Will Happen When the Pandemic Ends?

This is the one million dollar question! We’ve seen depressing in Standard paper prices and inflation in Reserved List cards because of the lack of large in-person events. Will this trend hold when these events resume, or will we see a reversal of trends?

I don’t have a crystal ball, but I’m going to make my best guess. Please take this with a grain of salt and know this is just one possible outcome based on my own hypotheses.

I expect Standard prices to rebound once in-person paper events start happening again. The most-played rares and mythic rares should see some price appreciation. What’s more, it’s possible that Standard sets that came out during the pandemic (Ikoria, Core Set 2021, Zendikar Rising) will have slightly inflated prices if fewer boosters of the sets were opened during the time of their launch.

If there’s less demand for cards from these sets now, there’s less motivation for vendors to crack more product to sell the singles. But if demand sees a rebound when in-paper events return, some vendors may be caught offsides with less inventory than needed. If Wizards is still printing these sets to demand, the trend may be temporary and undetectable. But if the sets aren’t being printed because newer sets are the primary focus, then we could see the trend become more permanent. 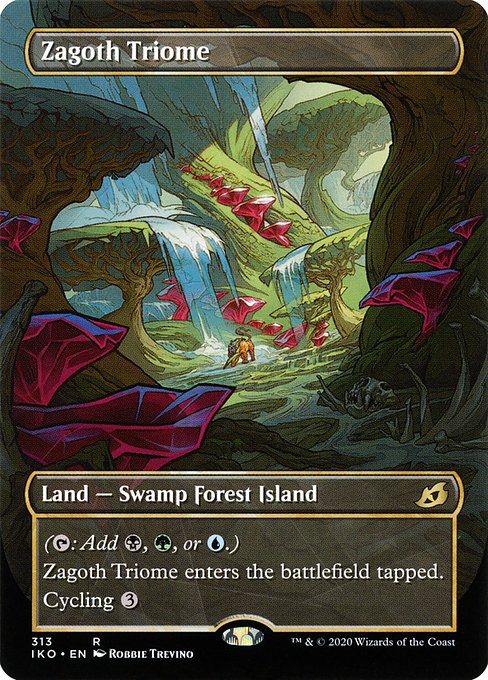 Reserved List cards, on the other hand, may not trend so favorably. I think we’ll see a retrace in the unplayable stuff. Random 4/6’s that cost 7 mana from Legends won’t hold up. North Star, card I love for its art, can’t maintain an $80 price point. Maybe one day it’ll gradually climb there, but this was a $15 card at the beginning of this pandemic. I suspect it’ll retrace to something in the $30-$40 range once supply can flow through the market again. 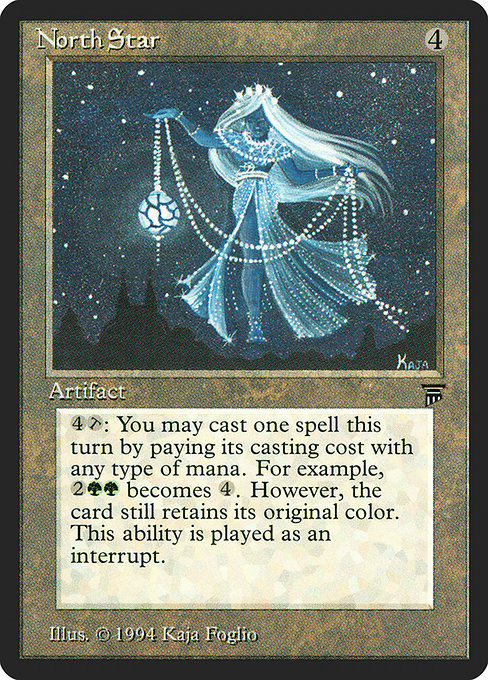 More playable stuff will fare better, keeping a larger percentage of their 2020 gains. But the best performers will likely be the Power 9. As prices on Dual Lands and other Reserved List cards soar, it has been easier and easier for players to trade into Power. This has buoyed prices on this group of cards—specifically Unlimited and Collectors’ Edition copies. These are viewed as the “crème of the crop” when it comes to price stability. They are not only extremely powerful in games of Vintage and Old School, but they also double as some of the safest investments one can make in the game.

While speculators will be quick to unload random, unplayable cards from Legends once large-scale events resume, I don’t think the number of players rushing to sell their Power is nearly as high. Thus, any increase in the price of Power 9 will likely be stickiest of all.

Then there’s the fact that Bitcoin is approaching all-time highs…but that’s a subject for a different day.

COVID-19 has been a major disruption in just about everyone’s lives across the globe. So many markets have been profoundly impacted, and Magic is certainly no exception.

This has manifested itself in two ways. First, despite being as popular as ever thanks to the Arena platform, Standard card prices are depressed relative to past years. There’s just not a lot of paper demand for Standard staples since events are mostly virtual nowadays. When that changes, the trend may reverse and some paper Standard prices will rebound.

Second, Reserved List cards are through the roof on short supply. It’s important to keep in mind that this segment of the market is up because of a supply squeeze more than actual newfound demand (outside of FOMO and speculation). To me, this means large in-person events will once again allow vendors to restock on these cards. As they do, we will start to see what kind of new prices the market can bear. I suspect the unplayable stuff will falter, and vendors will be forced to gradually reduce prices to trim down on their suddenly supply glut.

Whatever happens, 2021 will definitely be a fascinating year for Magic finance and I look forward to monitoring market trends and highlighting my observations here weekly! Stay tuned for plenty of opportunities in the months to come…once we get passed this crummy pandemic!

One thought on “Looking Ahead to When the Pandemic Ends”