Magic Online league data and tournament results for the Pauper format have shown that the recent addition of Fall from Favor is having an adverse effect on the metagame. Serving as both a creature removal tool and a card advantage engine, Fall from Favor pushes out aggressive creature decks and places too much emphasis on a player becoming and remaining the monarch before opposing decks can prepare counterplay.

Pauper players have been lamenting the effects of Monarch on the format for months now, and this ban is the first step in hopefully taking the format back to a more balanced place. It's nice to see Wizards taking steps to help the metagame of an eternal format, and hopefully, this is setting the precedent that they will take more action if the format continues to stagnate. 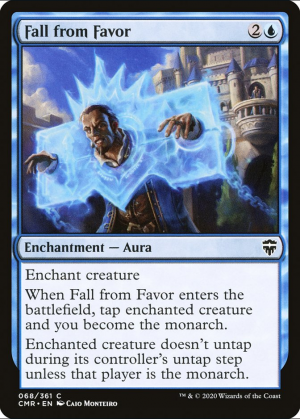