It’s amazing how ahead of its time InQuest Magazine truly was. The monthly magazine, which was published from 1995 to 2007, has now predicted at least a couple of major trends in Magic.

It started with the creation of a “sixth color”. Technically, InQuest writers predicted the color would be purple, and the lands that created purple mana would be called portals. It didn’t exactly come to fruition in this way, but Wizards did create a sixth basic land type: Wastes. I suspect we haven’t seen the last of those lands and the colorless mana mechanic, either, as Wizards seems to like returning to a world with Eldrazi in them.

But in the meantime, it looks like Magic will be traveling to a different world—one which was also predicted by InQuest Magazine. Back in Issue #69, the magazine published “what if” Magic cards themed around Middle Earth. 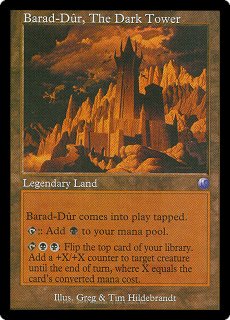 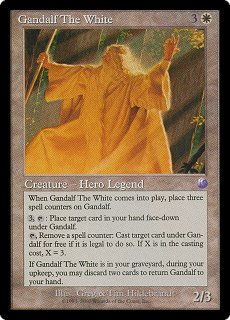 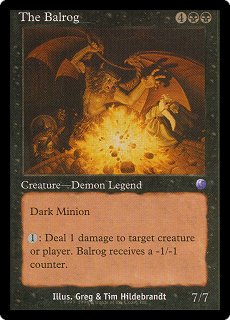 Now, about 20 years after these Middle Earth cards were published, Wizards of the Coast president Chris Cocks announced a series of cards that will feature crossovers with two franchises: Warhammer 40,000 and Lord of the Rings.

While little is still known about these releases, I’m going to speculate a bit this week and explore possible MTG finance implications of such sets.

These Ain’t Your Parents’ Magic Cards

In an old person’s voice: “When I was your age, we walked to our local hobby shops, uphill in the snow, and were thrilled to have enough change to purchase a cheap pack of Fallen Empires or Homelands. I never did open that Hand of Justice, but at least I knew what my Magic: the Gathering cards would look like!”

Let’s face it: Magic has come a long way since its inception in 1993. 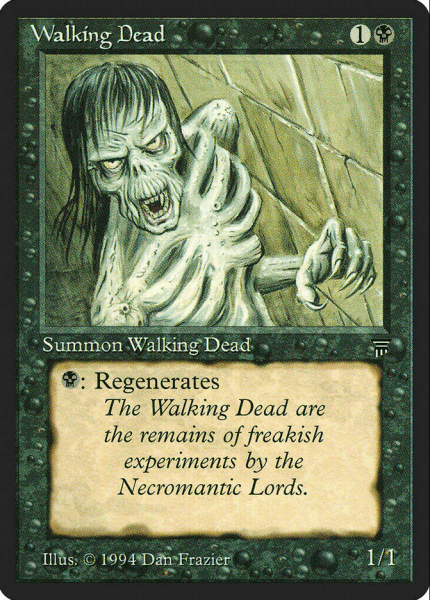 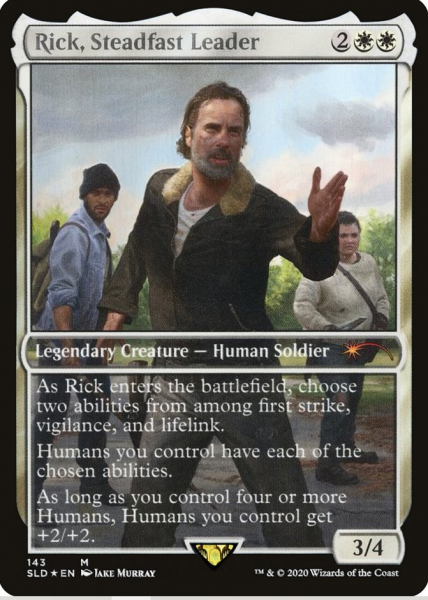 Players who have been around for a while (including myself) may be swift to criticize the direction that Magic has taken over the years. What used to evoke imagination, pretending to be a Planeswalker casting spells and summoning creatures to destroy your opponent, has now boiled down to the concrete. I find it difficult pretending to be that same Planeswalker when summoning Rick, Steadfast Leader to the battlefield. But maybe that’s just me.

Then there are all the novel frames, foilings, and artworks. Rick, Steadfast Leader is an extreme case, but there are many variants of Magic cards being printed nowadays that, quite frankly, don’t look like Magic cards! 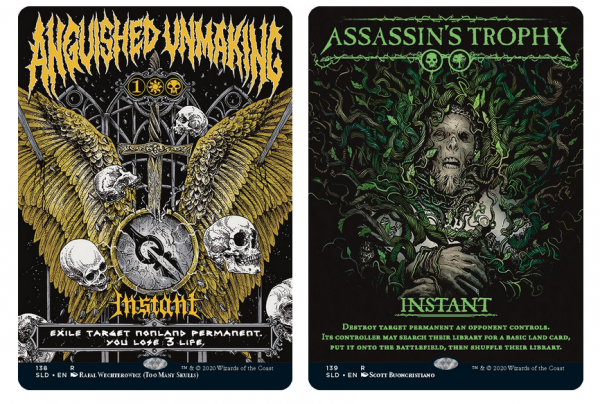 Don’t get me wrong—the artwork on this series of cards is incredible. It’s obvious these artists are talented, and the cards do give off a 1990’s heavy metal vibe. But these look nothing like a Magic card. At this point, you could sit down across from an opponent and their opening hand can contain seven cards that don’t look remotely like a traditional Magic card.

I predict Wizards will be doing more of this over the next few years, not less. They tend to follow a strategy where they discover a successful, new idea, and then proceed to reapply that same idea over and over again until it loses its luster. We’re still in the hype phase with these alternate-style Magic cards. A time will come when doing live coverage of a Magic event will become extremely difficult simply because commentators will struggle to identify every variant of every card that exists...there are already a bunch that don't even look like Magic cards to begin with!

It’s ironic that the newest set released by Wizards, Time Spiral Remastered, boasts reprints of cards in the classic Magic frame. Perhaps this was done to placate the enfranchised players. 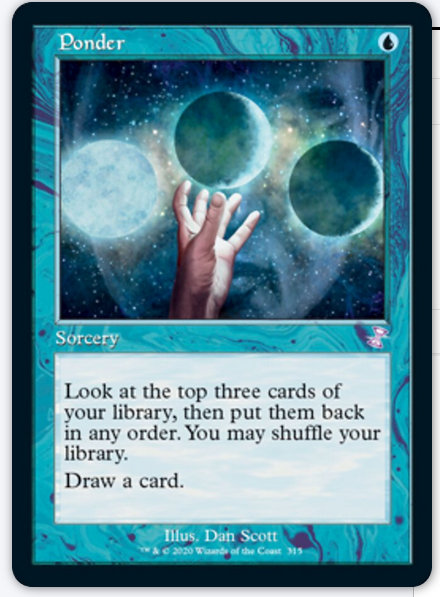 It’s no simple task to predict the impact a Lord of the Rings-themed Magic set will have on the game. A balance needs to be struck between the players who appreciate the classic aesthetic/storyline of the game, and the players who embrace the ability to play their favorite game with some of their favorite characters and themes from other franchises.

When all the dust settles, however, I predict these crossovers will be a net positive for Magic on the whole. Creating a Lord of the Rings, Dungeons and Dragons, and Warhammer 40,000 themed set will bring newcomers to Magic by tapping into other fantasy-related games/storylines. This growth in the player base will, in turn, grow the popularity of the collectible card game.

These newcomers won’t exclusively purchase and play cards from their associated franchise. Once they get a taste of how great a game Magic is, I’m confident many will stick around, at least for a while. This means an increase in demand for Magic’s other, more traditional sets.

The impact on newer sets will be miniscule, probably even negligible. New sets are “print to demand” for the most part, so (COVID-19 aside) there should be no problem creating enough new product to satiate the appetite of classic and new Magic players alike.

But what about the impact on older cards, such as Commander staples that haven’t been reprinted in a while or Reserved List cards? One may postulate that a Lord of the Rings fan wouldn’t have interest in spending hundreds of dollars on a Dual Land or Wheel of Fortune. But the reality is, Commander is Magic’s most popular format nowadays. It would be shortsighted to assume newcomers to Magic wouldn’t naturally drift towards a format where they’re encouraged to play all their favorite crossover cards in a friendly environment.

At least some number of these newer players will want the appropriate Reserved List cards for their deck. It seems inevitable.

I also put forth the assumption that fans of these other franchises may have extra cash on hand to spend on hobbies just like Magic players do. Perhaps there will be a little sticker shock at first, but I see no reason why a $500 card would cause a Warhammer 40,000 player to balk any more or less than a Magic player. 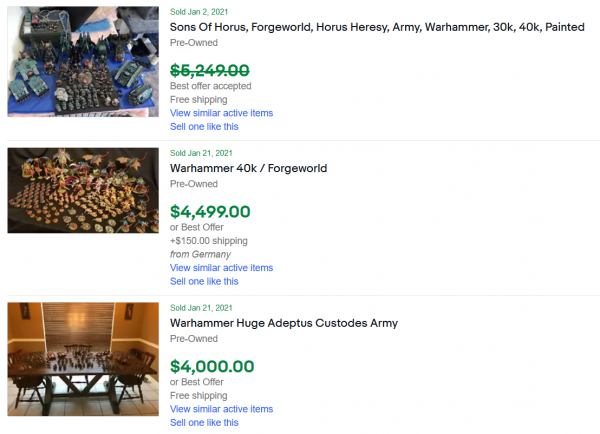 Thus, it’s no large leap to hypothesize that a growing player base will lead to more demand pressure on all things Magic, which will send prices of the most desirable Reserved List cards higher. A Lord of the Rings fan probably won’t rush out and purchase a Bazaar of Baghdad or Juzám Djinn—they probably won’t be the first ones to pick up Vintage or to pine for Magic’s nostalgia. But could a Lord of the Rings fan prioritize buying a Gaea's Cradle for their Legolas Commander deck? I definitely think so!

I don’t think you even have to try and guess which cards will align themselves best with Lord of the Rings or Warhammer 40,000. Since these are all going to be Magic cards in their own right, it’s safe to assume that good Commander cards will remain good. In other words, there’s no reinvention of the wheel here. A card that was a good investment before becomes an even better investment in a world where the Magic player base grows.

There’s time yet before these franchise crossover Magic sets are released. We know very little about them at the moment. But that really doesn’t matter—when it comes to MTG finance, anything that brings new players to the game will be a net positive for card prices.

The more mainstream Magic becomes, the greater its longevity. If Magic sticks around for another couple decades, some of the game’s earliest cards—especially those Commander staples on the Reserved List—stand to appreciate significantly in value. For this reason (and many others), I remain steadfastly bullish on Magic prices over the long term.

Now that the franchise crossover barrier has been broken, there’s really no limit to what Wizards of the Coast can do to draw newcomers to the game. Hasbro is well-versed in this space. Just look at what they did with Monopoly. What began as a popular board game in the 1930’s has evolved to become one of the most proliferated games in the world with numerous cross-overs and spinoffs. Reinventing a classic to drive sales is not a foreign concept to Hasbro.

As for predicting which crossovers may come next? I’d look no further than old InQuest magazines! They apparently have a knack for making such predictions about the future of Magic. They already predicted Advanced Dungeons and Dragons and Middle Earth cards. They also have Manga Magic, Planet of the Apes, Cthulhu, Stephen King, and Dragonlance crossover card creations…perhaps we’ll see some of these come to fruition in the years to come?

Regardless of what the franchises are, any chance to bring new eyes to the beloved game of Magic should bode well in keeping the game alive, thriving, and therefore quite lucrative for years to come!